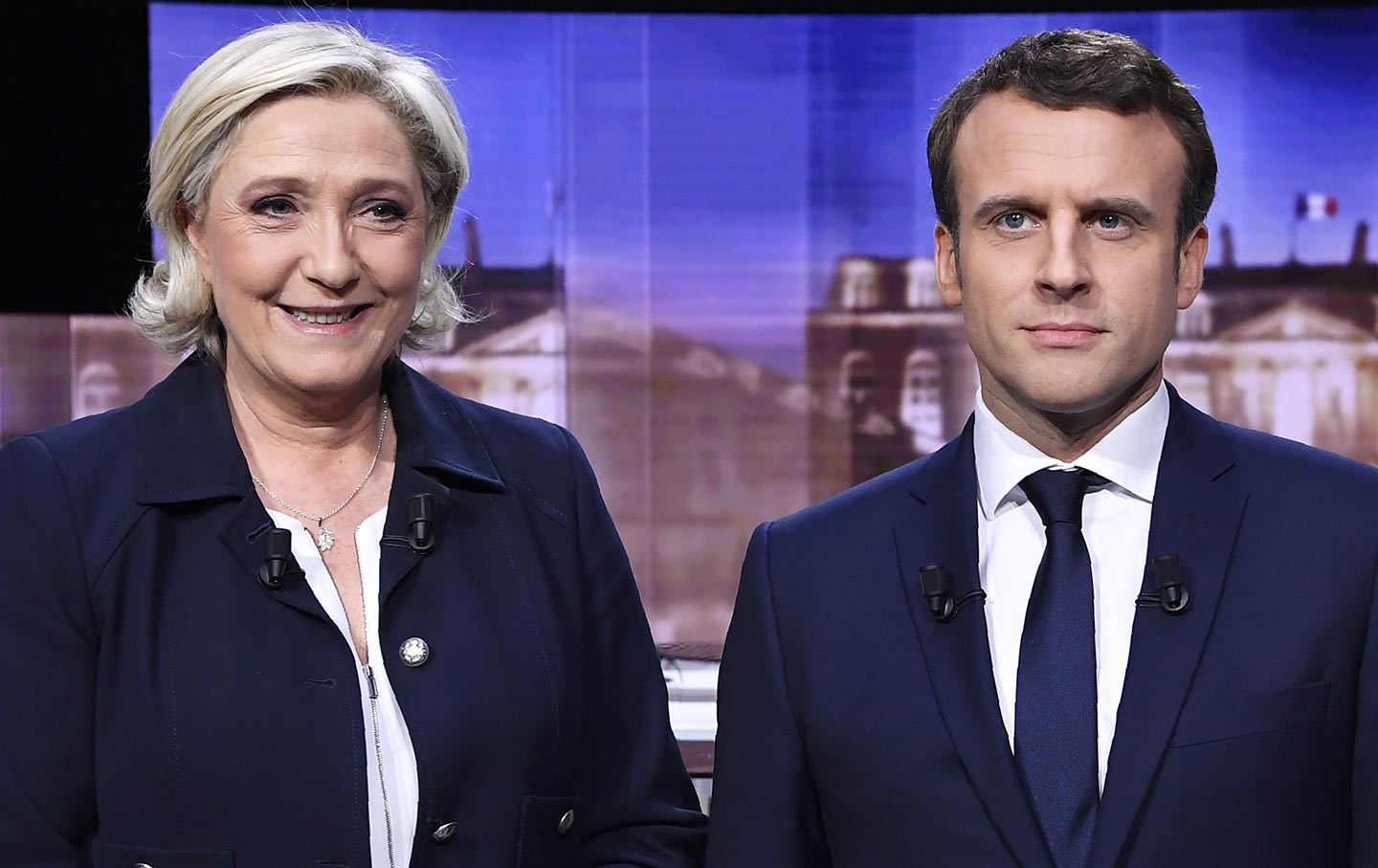 Marine Le Pen and Emmanuel Macron, candidates for the 2017 French presidential election, pose prior to the start of a live prime-time debate in the studios of French television station France 2, May 3, 2017. (Reuters / Eric Feferberg)

As France heads into the second and final round of its presidential election on Sunday, a number of observers have compared the choice between the far-right candidate Marine Le Pen and centrist neoliberal Emmanuel Macron with the Trump-Clinton contest of 2016. There are similarities: Le Pen, who is politely called xenophobic, like Trump represents an anti-immigrant, right-wing nationalism combined with some populist appeals. Macron, a former investment banker, was economy minister under the current Socialist government who, like Clinton, is widely seen as too close to powerful financial interests.1

But one significant difference is that if Clinton had won the US presidency last year, she would most likely have tried to win some net improvements in the living standards and economic security of the majority of the electorate—including working-class and poor people—who voted for her. The same cannot be said for Macron in France. His public platform has been vague, but insofar as it has a discernible trend, it is the same as the direction the country has moved over most of the past decade. That has included large public-pension cuts, labor-law reform that has weakened the bargaining power of unions and made it easier for employers to dismiss workers (including the “Macron Law,” as it is called, of 2015), and spending cuts.2

How does France, a country with an advanced welfare state that provides nearly free university tuition, universal health care, and free child care, end up with less of a choice than what Americans faced last year? (And don’t get me wrong: I think it’s still an important choice to make, given the special dangers that Le Pen, like Trump, represents.)3

The short answer is that there is a structural problem in the eurozone, and the EU. The European Central Bank, the European Commission, and the International Monetary Fund (which is not an independent entity but generally answers to its European directors for decisions affecting Europe) are the European authorities that have increasingly constrained the economic decision-making of European governments. We can also include the Eurogroup of finance ministers, which has tormented poor Greece and helped prolong that country’s interminable economic crisis.4

These people have shown that they are committed to creating a different kind of Europe. This can be seen in a paper trail of thousands of pages of documents, called Article IV consultations, in which the IMF and EU government finance ministries hammer out their views on economic policy. These documents represent an elite consensus that can differ greatly from public opinion within the countries. A review of 67 of these agreements for the four years from 2008 through 2011, for 27 EU countries, showed a clear pattern of policy choices: cutting government spending, including on health care and pensions; increasing labor supply; reducing public-sector employment; and changes in labor law that would reduce the scope of collective bargaining.5

This is the kind of economic program that any politician or political party who does not want to be labeled as “anti-Europe” must adhere to, and it can be seen in the most recent (July 2016) IMF Article IV consultation for France, as well as the Stability Program that France has agreed to with the European Union. These documents insist that France freeze real spending and commit to reducing its budget deficit to zero by 2021. These commitments imply that the French government can do nothing to reduce mass unemployment, which has averaged about 10 percent over the past year.6

Although the major Western media portray the EU authorities’ policies as the only sensible course, in economic terms, it is anything but. With France’s real borrowing costs near zero and inflation well below target, it makes sense for France to implement an economic stimulus, for example by increasing public investment. Fears of increasing the French public debt are unfounded; annual interest payments on that debt are currently at about 1.7 percent of GDP, a modest burden by any historical or international comparison.7

In the presidential debate Wednesday night, Macron rightly accused Le Pen of a “campaign of fear,” for her manipulation of the threat of terrorism and her anti-immigrant positions. But he also played on public fear and misunderstanding in arguing for neoliberal, regressive reforms. For example, he said that reversing the two-year increase in the retirement age would cost 30 billion euros. He didn’t say over what time period, but 30 billion euros is about 1.3 percent of current annual GDP, and it would presumably be spread over a very long period. In 2009, just before the Sarkozy government raised the retirement age by two years, the European Commission projected a 1 percent increase in pension costs over 60 years. With GDP expected to more than double over this period, it’s hard to see how this could be a problem.8

Since the 2008–09 world financial crisis and recession, the project of the eurozone, and to some extent that of the EU, has created a destructive feedback loop that led directly to the dysfunctional politics now unfolding in France. It is one thing to give up some national sovereignty for a common project that can raise common living standards; it is quite another to surrender a country’s most important macroeconomic decision-making (monetary, exchange rate, and, increasingly, fiscal policy) to unaccountable authorities who have demonstrated their commitment to a regressive agenda. The center-left’s collaboration with this program—including President François Hollande’s in France—has given the far right opportunities not seen since the 1930s.9

Europe’s hope resides with a left that can become strong enough to change the EU’s economic course.

Le Pen’s complaints about this loss of sovereignty and even of democracy, mixed as they are with racist nationalism, are about as politically useful as the Batman archvillain Bane garbling the populist slogans of the Occupy movement. The same is true for the National Front’s clever switch from a traditional right-wing economic program to a Keynesian, pro-welfare-state posture. Whether she means it or not, she is the wrong messenger.10

Europe’s hope resides with a left that can become strong enough to change the economic course that EU authorities have charted. If the voters who chose the leftist Jean-Luc Mélenchon and the Socialist Party candidate Benoît Hamon in the first round had cast their ballots for a single candidate, that person could have been in the runoff, offering a progressive alternative. Such an alternative won’t be on offer this Sunday, but the day that it will be is getting nearer.11