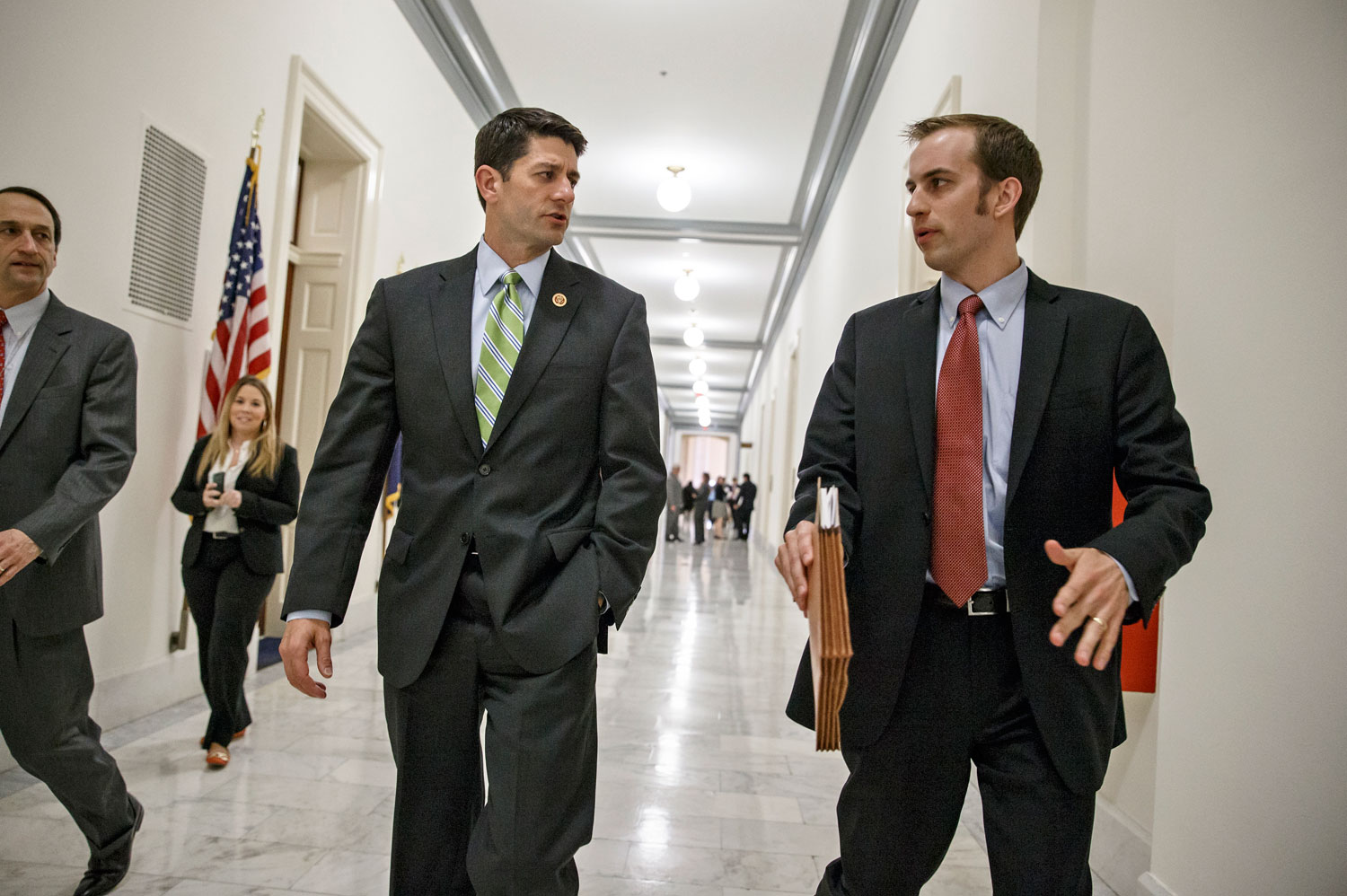 Representative Paul Ryan released his budget blueprint this week, and fans of his work were no doubt pleased: it called for $5 trillion in spending cuts over the next decade, focused heavily on domestic, non-military spending. Safety net programs like Medicaid and food stamps would face savage cuts, and the Affordable Health Care Act would be repealed entirely. Meanwhile, both corporate and individual tax rates would be lowered.

It is easy to make the case that the rich get richer and the poor get poorer under Ryan’s so-called “Path to Prosperity” plan: one needs only to look at the literally trillions cut from Medicaid and food stamps while the rich pay much less in taxes.

But it’s important to refine that point and note that the financial sector in particular gets many special favors in the Ryan plan. After all, it is one of Ryan’s leading benefactors and he can even be spotted sipping $350 bottles of wine with industry leaders from time to time. And his budget is no doubt a path to prosperity for them.

Cutting the Securities and Exchange Commission budget: Already, the head of the SEC is complaining that her agency’s budget is not nearly adequate to police the country’s massive financial sector. In a speech earlier this year at SEC headquarters, director Mary Jo White said, “our funding falls significantly short of the level we need to fulfill our mission to investors, companies and the markets.” The SEC has only 4,200 employees, but must regulate eighteen different stock exchanges and over 25,000 different market participants—and the agency’s responsibilities are growing thanks to new mandates from the Dodd-Frank financial reform legislation.

Ryan has a much different take in his budget: he thinks the SEC is just too big. He doesn’t apply a dollar figure, but makes it clear the agency’s already meager budget should be substantially “streamlined.”

“In the run-up to the financial crisis and its aftermath, the SEC repeatedly failed to fulfill any part of its mission,” his blueprint notes, ticking off a familiar list of whiffs, from the unsound nature of Bear Stearns and Lehman Brothers to the Ponzi schemes run by Allen Stanford and Bernie Madoff.

So far, so good. But Ryan goes on: “These failures have taken place despite significant increases in funding at the SEC, which has seen its budget increase almost sixty-six percent since 2004.”

Apparently, the extra money was the problem. “This resolution questions the premise that more funding for the SEC means better, smarter regulation. Adding reams of regulations to the books and scores of regulators to the payrolls will not provide greater transparency, consumer protection and enforcement for increasingly complex markets. Instead, the SEC should streamline and make more efficient its operations and resources.”

In short: since the SEC failed to adequately police Wall Street at a time its budget was increasing, the magic solution would be to cut the agency’s budget, because ipso facto the agency’s performance would get better.

This line of thinking would not be unfamiliar to those who follow Ryan’s recommendations for federal anti-poverty programs, and it’s just as wrong here as it is there. As the agency’s director herself pointed out (on several different occasions), the SEC plainly needs more resources to conduct better regulation of a huge financial sector. Ryan provides no evidence, aside from that odd logical twist, that reducing the number of SEC staffers poring over filings from hedge funds would somehow increase oversight of those outfits.

Transferring the Consumer Financial Protection Bureau budget to Congress: Here Ryan resurrects a longstanding GOP proposal: that Congress, not the Federal Reserve, should fund the CFPB.

As it stands now, the bureau’s budget is essentially guaranteed. It can ask the Federal Reserve for funding up to a certain cap, and that request cannot be denied. The caps are fixed percentages of the Fed’s operating expenses. This guarantees autonomy from a Congress where many members (like, say, Ryan) are elected thanks to campaign contributions from the big financial institutions the CFPB polices.

Ryan claims to have a problem with this arrangement only because the Federal Reserve’s profits are supposed to be returned to the Treasury to reduce the deficit, but instead a portion of them are siphoned off to a new bureaucracy—one in which he suggests via scare quotes is ineffective. “Now, instead of directing these remittances to reduce the deficit, Dodd-Frank requires diverting a portion of them to pay for a new bureaucracy with the authority to write far-reaching rules on financial products and restrict credit to the very customers it seeks to ‘protect,’” says the blueprint.

CFPB funding would thus be transferred to Congress under the Ryan plan, and subject to annual appropriations. He doesn’t say what Congress should do with that budget once its under legislators control, but one needs only to look to his SEC budget proposals to get a sense of what would likely happen.

Ensuring Taxpayer Bailouts of Big Banks: This is another up-is-down situation where a lot of unpacking of Ryan’s language is needed. His budget says:

Although the proponents of Dodd-Frank went to great lengths to denounce bailouts, this law only sustains them. The Federal Deposit Insurance Corporation now has the authority to access taxpayer dollars in order to bail out the creditors of large, ‘‘systemically significant’’ financial institutions. This resolution calls for ending this regime, now enshrined into law, which paves the way for future bailouts. House Republicans put forth an enhanced bankruptcy alternative that—instead of rewarding corporate failure with taxpayer dollars—would place the responsibility for large, failing firms in the hands of the shareholders who own them, the managers who run them, and the creditors who finance them.

Sounds good! But that would actually accomplish the exact opposite.

Indeed, Dodd-Frank gave the FDIC the power to wind down too-big-to-fail banks, which is called “resolution authority.” In a crisis, if a failing bank is deemed too big for traditional bankruptcy, a panel of bankruptcy judges can place it in receivership under the FDIC. That FDIC in turn then makes a plan for winding down the institution safely—something Barney Frank called a “death panel” for big banks.

Crucially, under this structure, taxpayers can’t end up paying for this wind down—Dodd-Frank explicitly forbids it. Any taxpayer money used upfront to ease the firm into bankruptcy would be recouped by a structured sale of the bank’s assets. (Note that Ryan sneakily says the FDIC has the authority to “access taxpayer dollars,” eliding the fact that in the end it has to pay them back.)

Ryan’s alternative is to end FDIC’s resolution authority and simply “place the responsibility for large, failing firms in the hands of the shareholders who own them, the managers who run them, and the creditors who finance them.”

That’s akin to just saying “it will all work out.” It is unlikely in the extreme that the shareholders and managers can somehow bail out a failing big bank, especially in a crisis. Inevitably, Congress and thus taxpayers would have to step in, without any of the established authority like asset sales that the FDIC now possesses.

Ryan’s plan would lead to more taxpayer bailouts of failing big banks—and by stripping down the budgets of the agencies meant to oversee those institutions, make failure more likely in the first place. But in the meantime, his friends on Wall Street could enjoy less regulation, less oversight, and more comfort that taxpayers will someday come to the rescue.