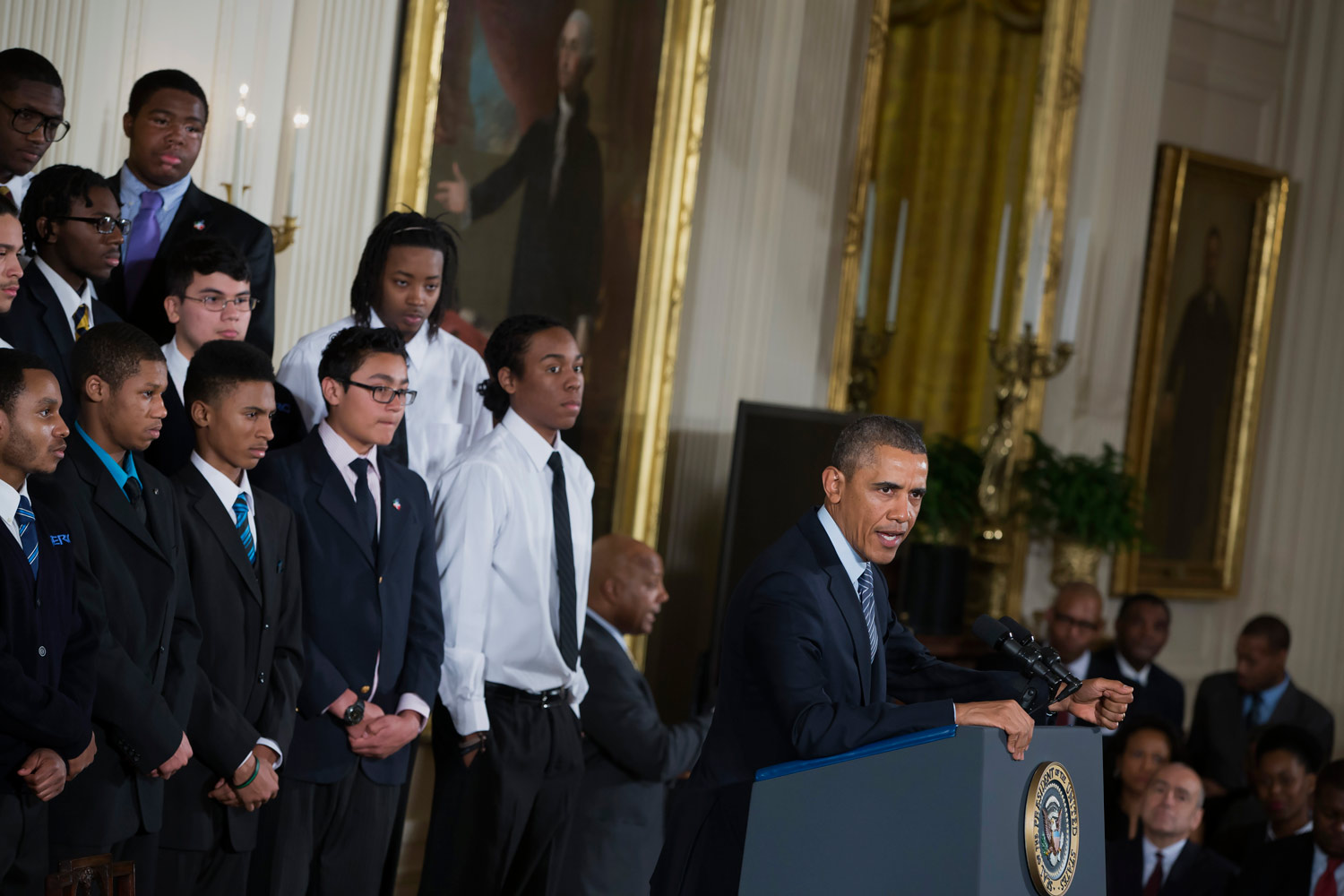 President Barack Obama during an event in the East Room of the White House to promote his "My Brother's Keeper" initiative, on Thursday, February 27, 2014 (AP Photo/ Evan Vucci)

Black males are in the news. For a constituency that is a mere 6 percent of the population, they occupy a position that is unique in its visibility and vulnerability. On any given Sunday, like modern gladiators, they display their athletic prowess before audiences composed largely of wealthy white ticketholders at basketball and football arenas throughout the country. They are similarly ubiquitous among the talent in the music industry, supplying a steady stream of singers and producers, from Quincy Jones and Berry Gordy to Jay-Z and Pharrell Williams.

Yet the quality of life for most black men in America is overwhelmingly negative. Across a broad array of indicators, the social and economic patterns are stark: in almost every aspect of life associated with success, black males are underrepresented, and in those aspects of life associated with failure and hardship, they are vastly overrepresented.

In education, the patterns are most disturbing. Black males have the highest dropout rates (50 percent or higher) in most cities and the lowest college enrollment, and they are more likely to be referred to special education or subjected to punitive discipline (suspension and expulsion) than any other group. They are more likely to be unemployed (and for longer periods), trapped in low-wage jobs or underrepresented in the professions. Finally, black and Latino men make up more than 50 percent of the US prison population. One out of thirty-five black men are behind bars, and one out of three can expect to be incarcerated at some point in his life.

These trends are not new. In fact, they have been around for so long that one could argue that the marginal status of black males has been “normalized”—like homelessness and cancer, accepted as an unpleasant but unavoidable fact of life. It may well be that the success of a small number of black men in sports and entertainment (and, perhaps, the ascension of one to the presidency) has obscured and overshadowed the dire hardships that beset the vast majority.

The lack of official response to this crisis finally came to an end in late February, when President Obama announced his My Brother’s Keeper initiative, an as-yet-undefined plan focused on addressing the plight of black males, which is designed to keep them in school and out of the criminal justice system. The initiative will bring foundations and private companies together to invest in a variety of strategies to support young black and Latino men. Already, hundreds of millions have been raised from private foundations (no public funds have been committed).

The initiative marks a departure for President Obama, who has largely avoided matters of race in his political career, well aware that his opponents would accuse him of “playing the race card” if there was even a hint that he was showing racial favoritism. Speaking at a press conference before a large group of young black men, the president made it clear that this is an issue he cares about deeply. He spoke in personal terms about his own challenges growing up: his marijuana use as a teenager, his lack of consistent effort in school, and the challenges he faced growing up without a father.

Some have expressed concern, based on Obama’s rhetorical emphasis on personal responsibility and his exhortations to young black men (“Brothers should pull up their pants”), that the president’s initiative will reinforce the notion that something is inherently wrong with young black men and not the society that has kept them isolated on the margins. And indeed, if the struggles of this group are defined as an attitude problem that can be fixed by exposing young black men to positive role models and admonishing them to display “grit,” we are unlikely to see the kinds of programs that concretely improve their lives.

To have an impact, the president will first have to recognize the structural barriers facing black and Latino males—lack of jobs in the inner city, persistently failing urban schools, mass incarceration and concentrated poverty—and then advance a set of policies aimed at removing them. This will not be easy. To call for a new series of education reforms would be an admission that his initiatives, like Race to the Top and the Common Core standards, have done little to improve academic outcomes for males of color. Moreover, making the labor market more accessible to black and Latino men who are chronically unemployed and locked out of the labor force is a huge and complicated undertaking.

But there are ways that My Brother’s Keeper could make a difference. It could, for example, invest in the small number of educational and employment initiatives that have proven effective at meeting the needs of black and Latino men. Youth Build provides job training and channels young men who have dropped out of school into construction jobs; Homeboy Industries has been successful in reducing violence and placing gang members and ex-convicts into jobs in Los Angeles, Milwaukee and the other cities where it operates; and Year Up, a private training program, has been able to help young people with just a high school diploma or GED find well-paid jobs in the finance and high-tech sectors.

These programs have been successful because they work at the nexus of education and employment and make it possible for those who have been shut out of the labor market to get jobs. Such programs won’t solve a problem that’s been centuries in the making, nor will they address the source of black male marginalization, frustration and despair. Still, by expanding opportunities for hundreds of young men, the president could show that his administration is capable of more than empty gestures. By taking meaningful action to help a constituency that has been counting on him (and that he is part of, at least theoretically), he can begin to restore the faith that has been eroding even among his most loyal supporters.