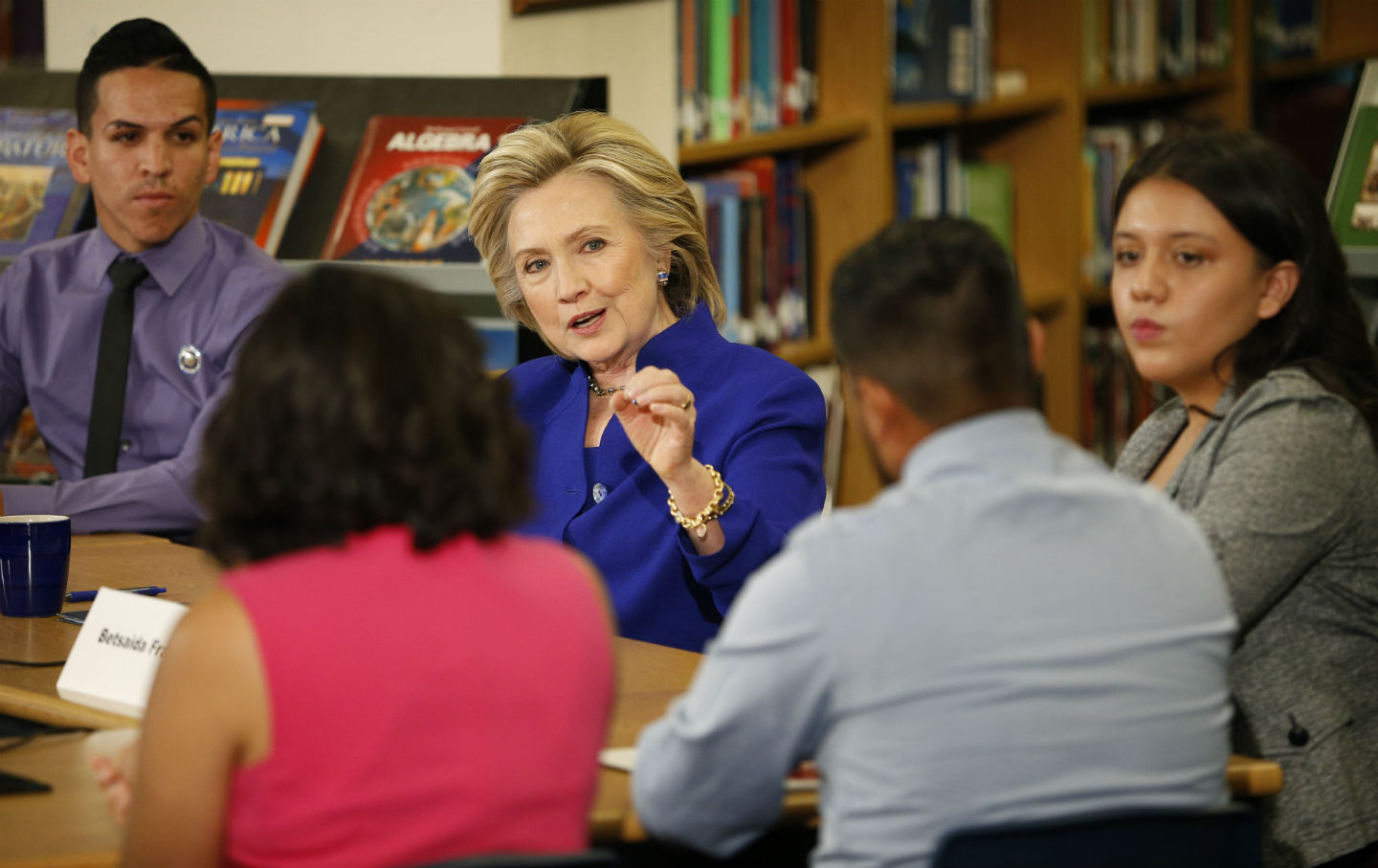 Hillary Clinton speaks with students about immigration during an event at Rancho High School in Las Vegas. (AP Photo/John Locher)

What a difference a disastrous midterm election makes. Before the 2014 vote, conventional wisdom in the Democratic Party still counseled political caution on immigration reform. Last summer, few were surprised when President Obama delayed announcing deportation relief until after the November vote; it was the kind of reluctant leadership the modern party has shown consistently on immigration. But less than a month into her campaign, Hillary Clinton struck a markedly different tone.

Clinton met with a group of undocumented students on May 5 and described an agenda that reflects just how much has changed since 2008. Young immigrants, in particular, are done waiting for politicians to catch up to the reality of their lives, and their rightful impatience fuels a movement that’s forcing the issue for Democrats and Republicans alike.

Clinton staged her meeting at the same Las Vegas high school where Obama announced his executive actions last November. These would grant legal status to as many as 5 million people, including some parents whose children were born as US citizens. A federal judge in Texas blocked those moves pending the outcome of a challenge to the president’s authority. Clinton said she not only supports Obama’s actions but would extend relief to parents of undocumented children, too. She called for the reunification of families already split up by deportation, questioned the safety of for-profit detention centers, and made a full-throated case for understanding immigration reform as a family-values issue. She stuck to the Democratic line that the first, best answer is a comprehensive reform law, but she was bullish about the authority she’d wield in the absence of congressional action.

Clinton’s remarks suggest that she’s now more concerned about losing Latino voters than pandering to xenophobic ones. That’s a welcome evolution from her 2008 bid, in which she alienated Latinos with tough talk on enforcement. “Anybody who committed a crime in this country or in the country they came from has to be deported immediately, with no legal process,” she said in South Carolina back then.

Clinton has moved significantly, but a core assumption must still be challenged: that new pathways to citizenship have to be balanced with aggressive enforcement. Much of the damage to families that Clinton discussed can be attributed to President Obama’s efforts to prove how tough Democrats can be. Last year, the administration crossed the threshold of 2 million deportees, prompting critics to call him the “deporter in chief.”

Obama has drawn a rhetorical line between good and bad immigrants. In announcing his November actions, he repeated his familiar argument that enforcement must target “felons, not families. Criminals, not children. Gang members, not a mom who’s working hard to provide for her kids.” One problem is that the deportation machine is difficult to control once set in motion: Repeated analyses have found that two-thirds of the people Obama has deported had either no criminal record or only misdemeanor violations. But a deeper problem is the notion that a punitive system can distinguish between felons and their families, gangbangers and their moms. The futility of this task can be seen in the human toll behind another law-enforcement statistic: An estimated one in 28 kids has a parent in prison today.

Both Obama and Clinton have been shoved forward by an increasingly insistent movement. That pressure must continue—and grow—until our leaders question the deportation system itself, not just parse who can be pulled from its maw.