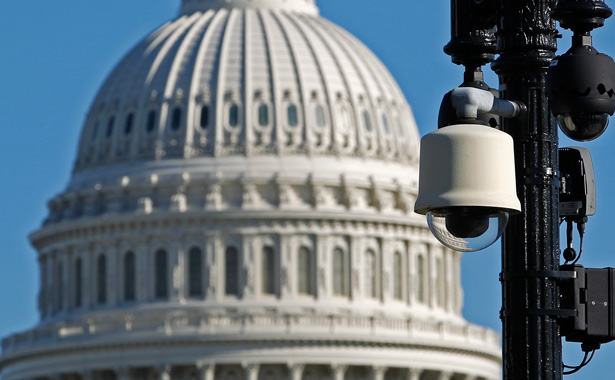 Surveillance cameras are visible near the U.S.Capitol in Washington Saturday, Oct. 26, 2013. (AP Photo)

Early in 2013, before Edward Snowden’s revelations, the Supreme Court turned aside a challenge by this magazine and other organizations to a 2008 law that permitted the National Security Agency to conduct dragnet surveillance of Americans’ international communications. The plaintiffs claimed that the law was unconstitutional, but the government argued that the plaintiffs lacked standing to pursue their challenge because they had failed to show that the law would be used to intercept their communications. In a 5-4 vote, the Court agreed with the government.

Over the past six months, we’ve learned a great deal about the way the NSA has been using and abusing its surveillance powers, including the powers that were at issue in the Supreme Court case, Clapper v. Amnesty. And we’ve learned something else as well: that the government’s representations to the Court were incomplete in some respects and altogether false in others.

The law that the plaintiffs challenged in Clapper, the FISA Amendments Act (FAA), authorizes mass acquisition of Americans’ international communications for foreign-intelligence purposes. It is the same law, we now know, the government relies on when it compels Google, Facebook and other companies to turn over customer e-mails, text and video chats, and photographs as part of the NSA’s PRISM program.

But long before PRISM came to light, the plaintiffs in Clapper argued that the FAA permitted the NSA to read Americans’ e-mails and listen in on their phone calls without a warrant, violating the Constitution. Rather than seriously engage this argument, the government contended that the plaintiffs had no business being in court at all. The dragnet surveillance described by the plaintiffs, it said, was mere “speculation” and “conjecture.”

The government also assured the courts that dismissing the plaintiffs’ challenge would not forever insulate the law from court review. The solicitor general told the Supreme Court that while the plaintiffs could not show that their communications had been intercepted, another group could: criminal defendants who were prosecuted based on evidence acquired under the surveillance law. These defendants, the government said, would be notified that they had been monitored by the NSA—and they would be able to challenge the law’s constitutionality. When the Supreme Court ruled against the plaintiffs in Clapper, Justice Samuel Alito repeated almost verbatim the government’s assurance that such defendants would receive notice.

Thanks to Snowden, we now know that the government’s arguments were misleading or worse. First, we know that the NSA is engaged in dragnet surveillance under the very law the plaintiffs challenged. The agency uses that law to monitor Americans’ communications with foreign-intelligence targets abroad—targets who may be journalists, academics or lawyers. A leaked copy of NSA procedures shows that the agency also conducts keyword searches of virtually all Americans’ international communications. As The New York Times reported in August, the NSA examines the contents of almost all text-based communications entering or leaving the country.

While the government’s claims about dragnet surveillance were misleading, its claims about the “notice” provided to criminal defendants were simply false. Since the Supreme Court’s decision in Clapper, the government has conceded that at the time the case was argued, in October—and for the five years preceding—it did not provide notice to criminal defendants who had been monitored under the surveillance law.

The ACLU, as well as three members of the Senate Intelligence Committee, has called on the solicitor general to correct the record in the Supreme Court, but thus far the government has failed to do so.

The government will not be able to insulate the law from constitutional review forever. Recent disclosures have finally forced the government to provide criminal defendants with notice of surveillance under the 2008 law—the notice that the government should have been providing all along. Those defendants will now have a chance to challenge the law in court.

Their cases will raise issues of significance for all Americans, and it’s crucial that judges scrutinize the government’s claims in them more searchingly than they have in the past. The Snowden revelations have been a watershed, exposing practices that the public—and the courts—should have known about long ago. The outcome in Clapper, which hinged on a single vote, might have been different had the Supreme Court known then what we all know now.

In December, Federal District Court Judge Richard Leon invalidated the NSA’s call-tracking program in a careful ruling that treated the government’s arguments respectfully but skeptically. Other judges should follow Leon’s lead. For too long, the extraordinary deference accorded to national security officials has allowed misleading claims to stand uncorrected, and abusive and unconstitutional practices to flourish.