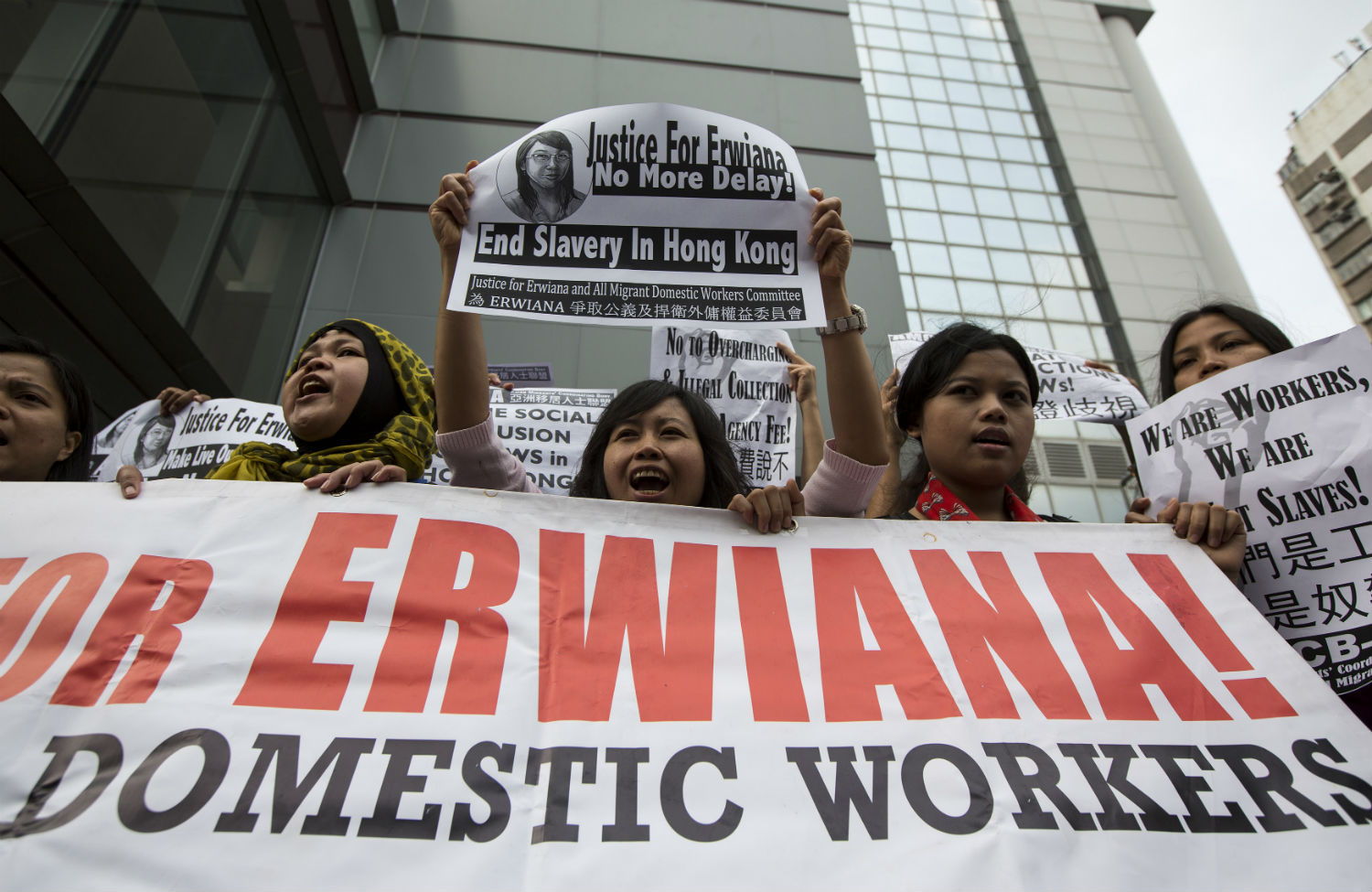 The horror story of Erwiana Sulistyaningsih, the young Indonesian domestic worker who suffered months of captivity and torture, splashed across Hong Kong’s front pages and sparked public outrage. But although Hong Kongers were shocked by the reports of brutal enslavement and photos of her battered body, residents seemed less perturbed about the systematic wage theft and fraud that pervades the migrant contract labor system. Or the fact that Erwiana had worked for a seemingly normal urban family, and tried to escape before, but no helping hand ever reached her in this hyper-modern metropolis.

For most of Hong Kong’s roughly 320,000 migrant domestic workers, it’s not sadistic torture that they worry about every day, but rather, day-to-day abuses and indignities they suffer that together add up to a massive labor crisis. Within this neoliberal city-state, caught between embryonic post-colonial democracy and authoritarian capitalism, migrant household service workers have developed solid labor organizations, but policymakers still exclude them from residency rights and treat them as indentured servants.

Current laws essentially tether contracted domestic workers to their employers: they cannot live outside the home, and under the “two-week rule,” cannot leave their job without immediately finding new work, or else risk losing their legal status. These strictures, combined with exclusion from standard minimum wage protections for citizens (though domestic workers make up some eight percent of the workforce), put Hong Kong at odds with the International Labour Organization’s Convention on Domestic Workers’ Rights, a 2011 accord guaranteeing basic labor protections and rights, and which has not been adopted by China’s central government.

Though Hong Kong is known for its sophisticated legal system, justice remains largely inaccessible to migrant workers who are cheated by employment agencies. Shady links between agencies and lending companies, along with government’s tendency to side with business, allows the system to bilk workers from all sides.

Although there is a mediation program run by the Philippines consular authorities, according to research published in 2012 by Migrant Workers Mission, the process is rigged to pressure victims to settle for partial rewards, so that “workers receive as settlement a relatively small percentage (45.39%) of the amount that they paid to the agencies in order to work as domestic workers.”

One account in a Mission newsletter describes the endemic corruption faced by a Filipina domestic worker who was pressured to take a fraudulent loan, which “went directly to the HK agency manager.” When she later sought recompense in the conciliation process, “the long and demanding times required of her to attend meetings with agency forced her to agree to a settlement of HK $1,500 (out of HK $7,900)!” (about US$200 out of $1020).

Though the torture Erwiana experienced was an extreme case, everyday violence and degradation is virtually an open secret in the “maid trade,” facilitated by the workers social isolation. A 2013 survey of Asian domestic workers showed that about 18 percent of respondents reportedly experienced physical abuse, more than half experienced verbal abuse, with much higher rates reported by Sri Lankan, Thai, Indonesian and Nepalese workers. Under the live-in policy, one in four reported “they do not feel safe in their sleeping space/quarters.”

Collective action is the only grassroots channel for holding employers accountable and educating workers about their rights, but they are heavily constrained by the workers’ lack of basic civil rights. Still, according to a 2012 analysis of migrant trade unionism, Hong Kong presents a laboratory for migrant union organizing, which “enhances [their] identity as workers regardless of their position in the formal or informal sector of the economy.” But a keystone of unionism, collective bargaining is not yet possible for domestic workers.

Cynthia Abdon-Tellez, head of the service organization Mission for Migrant Workers, explains via e-mail from Hong Kong, even with unions, “there is no collective bargaining because it is generally a one employer, one employee situation among migrant workers, especially the foreign domestic workers. However, through their advocacies, unions collectively call and work for policy changes.” Absent a viable legal framework for real collective bargaining, she adds, “legislation is the only way at present. That is why submissions, positions and at times mass actions are the forms used to [pressure] the Legislative and Executive Councils of the HK government.”

One promising worker-led organizing model is the Indonesian Migrant Workers’ Union (IMWU), a formally recognized union that seeks to protect migrants by building community. According to a report by the Asia Pacific Mission for Migrants, members recruit workers through recreational programs on their day off, and then engage them politically through a “‘Know Your Rights’ campaign, which teaches the migrant worker about her rights as a worker and about broader human rights issues.” This draws them toward grassroots campaigning, often coordinated through mobile networks.

But attending organizing meetings is impossible for many workers. Some 60 percent of workers report being denied even their day off, according to the IMWU, and “Even with the facilitation of communication online, sometimes employers do not allow the domestic workers to use their cell phones.” Some workers can only meet while their bosses are asleep, so “weekly meeting begins at 11pm and goes until 2am.”

In Abdon-Tellez’s view, the government insists, like many other countries that have refused to ratify the Convention (including the United States and Hong Kong’s former colonizer Britain) that it is exceptional:

The Hong Kong government, through its Labour Department, makes the claim that the territory already has one of the best policies and legal environments for [foreign domestic workers] anywhere in the world. It cites the right to self-organize and redress to justice as cases in point, while ignoring demands by migrant organizations to reform restrictive policies and laws that coexist alongside the more liberal ones.

Even the landmark case of Erwiana Sulistyaningsih is being downplayed by the HK authorities in order for the policies to not be put in question.

Sadly, this supposed exceptionalism helps buttress a medieval system of labor alongside an impeccably modern legal structure. Erwiana’s story showed the extremes that these rules allow, but to rewrite the rules, Hong Kong must listen to what workers have been saying all along—while their bosses slept, stealing precious moments alone to share their stories.