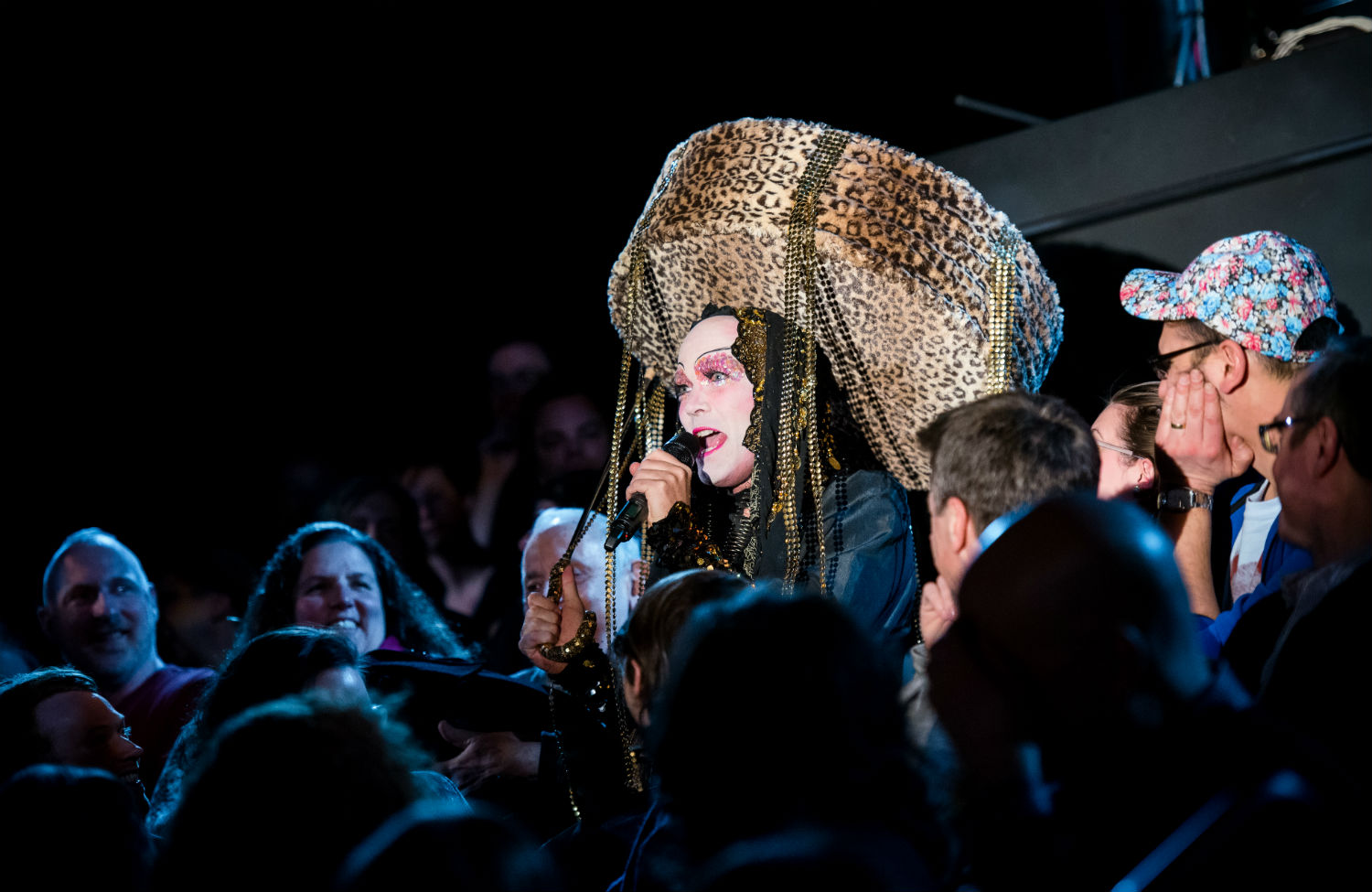 When I was teenager, obsessed with music, my father gave me a scrap of what passed for him as inside information: a gay man could once ascertain if another man was companionably disposed by asking if he was “musical.” My dad was trying to forewarn me that any mention of my obsession to other boys could be taken as gay sex talk. I was under-equipped to process his unnecessarily unsettling paranoia, and responded by blurting out, “Music is not gay!”

A loud and proud rebuttal of my younger self can be heard this month at the Under the Radar Festival at New York Live Arts in Chelsea, where Taylor Mac is staging the latest iteration of the mind-twisting rumination on musicality and gayness that he has been developing for several years and testing on stages around the country. It’s an expansive, malleable, and madly ambitious project called “A 24-Decade History of Popular Music.” The bland faux-encyclopedism of the title belies the radical strategy of the work—an intent, as Mac has put it, to unearth queer agency in the whole history of American pop.

In each of the project’s various incarnations, Mac performs a selection of hit songs from a given time period. Two years ago, at the Public Theater in New York, I saw him do a show of music from the twentieth century. Mac has performed versions devoted to the music of the late eighteenth century and the hits of the nineteenth century. (Yes, there were hits—bona fide smashes—in the 1800s, sold by the millions as sheet music for an entertainment-deprived populace to sing and play on their parlor pianos.) At Under the Radar, Mac has been presenting a string of shows, beginning with a three-hour performance of songs from the first three decades of the twentieth century, which I attended. It will be followed by a three-hour presentation of music from the next three decades of that century, and both of those shows will be combined in a six-hour event to be staged on January 25. Mac’s plan is to have the series culminate in an epic twenty-four-hour performance of songs from the twenty-four decades spanning from 1776 to 2016, to take place at some point next year.

Mac, who cites his gender as “performer,” does his act in a deliciously preposterous drag straight out of the Greenwich Village of the 1970s, when drag queens like Rollerena exploded the conventions of gender normativity in the name of shameless showbiz. Mac’s stage persona, bedecked in grotesquely frou-frou gowns and headwear fashioned from ostrich feathers and party balloons, is a classical drag amalgam of old-Hollywood glamour, pissy queen schtick, and sly, winking intelligence. Mac is performing a character that would have seemed wildly subversive a few decades ago but now comes across as cutely, almost quaintly nostalgic.

The shows, titles be damned, are anything but scholarly surveys of pop-music history. Yet they are driven by ideas, most pointedly the proposition that a hit song is a window onto its time, and that what we can see through that window, if we look hard, is lots of gay goings-on—stories of same-sex attraction, suggested in hints or code, and expressions of feeling misunderstood, unaccepted, lost, or confused. In one show of Mac’s that I saw at Joe’s Pub at The Public, he performed the first monster hit of the sheet-music era, Charles K. Harris’s “After the Ball.” A sentimental ballad set to an Irish folk tune, the song is the lament of a sad old man who had lived his whole life alone. Mac, explaining the tune, gave a glance to the audience and said, drolly, “We know why he never married for all those years—they didn’t call it the Gay Nineties for nothing.”

The show at Under the Radar concluded with a set of songs that Mac strung around a story he spun about two men, Barry and Larry, veterans of World War I who are lovers. Mac brought two members of the audience on stage and assigned them to portray the men, standing on either side of him as he sang “Singin’ in the Rain” and “Tiptoe Through the Tulips.” Mac uses audience participation to collapse the categories of performer and public almost as deftly as he breaks down gender classifications. In one of the Under the Radar shows, he led rows of people into the aisles to simulate the migration of immigrants to America. At another point, he divided the audience into two groups, one pro-war and one anti-war, and led the groups in simultaneous performances of antithetical World War I songs, “It’s Time for Every Boy to Be a Soldier” and “I Didn’t Raise My Boy to Be a Soldier.”

By end of the show’s three hours, I realized that what I was experiencing was less a drag show than a revival meeting. There was the charismatic, fancy-dressed leader and the sing-along music employed to ingrain doctrine during the come-to-Jesus ritual of the attended, converted through the epiphany of performance, rising from the aisles. Mac often ends the show by leading the whole audience in a conga line, purling out of the theater. He did that in the Joe’s Pub show I saw, and I jumped right in and wiggled my butt to the beat. It was only later, when the giddy, dizzy feeling passed, that I thought it was a good thing my father wasn’t there to say, “I told you so.”