April 27, 2018, was a historic day for Korea, and for the millions of people on both sides of that tragically divided peninsula. In a meticulously planned event, Kim Jong-un, the 34-year-old hereditary dictator of North Korea, stepped carefully over the border running through the truce village of Panmunjom and clasped hands with Moon Jae-in, the democratically elected president of South Korea.2

Kim’s action marked the start of a remarkable day in which the two nations “solemnly declared” an end to the Korean War, which ripped the country apart from 1950 to 1953. “When you crossed the military border for the first time, Panmunjom became a symbol of peace, not a symbol of division,” said Moon, the son of two North Korean refugees who fled south in 1950. A former student activist and human-rights lawyer who was chief of staff to former president Roh Moo-hyun, Moon ran for office in 2017 on a pledge to make that moment of reconciliation possible.3

Over the next few hours, accompanied by top aides and diplomats, generals and intelligence chiefs, the Korean leaders discussed an agreement that would lead to what they both described as the “complete denuclearization” of the peninsula. The two also “affirmed the principle of determining the destiny of the Korean nation on their own accord,” a signal to both the United States and China that the days of great-power intervention in their divided country may be waning.4

The full Panmunjom Declaration, signed that Friday during an elaborate ceremony broadcast live in South Korea and around the world, included strong commitments to be taken “at all levels” of both societies to forge a lasting peace, including rebuilding key rail and road links, opening a permanent liaison office in the border city of Gaesong, and organizing civic and sports exchanges as well as the reunion of divided families. It marks a huge leap past the tensions of the previous year, when the United States and North Korea appeared to be lurching disastrously toward war, with South Korea caught in the crosshairs.5

To alleviate that possibility, Moon and Kim agreed to “actively pursue trilateral meetings” involving the United States, and later China, “with a view to declaring an end to the War and establishing a permanent and solid peace regime.” The participation of the United States (which led the UN Command during the war) and China (which subsequently pushed US forces out of the North) is necessary because they, along with North Korea, are the only signatories to the armistice that ended the fighting in 1953. (South Korea’s then-leader, the right-wing autocrat Syngman Rhee, refused to allow his generals to sign it.)6

The inter-Korea summit was designed to pave the way for the upcoming meeting between Kim and President Trump, which the White House now says will take place by the end of May, with Panmunjom a possible venue. (Singapore and Mongolia are also in the running.) Trump accepted Kim’s invitation to meet after hearing through Moon’s representatives in Washington that the North Korean leader had promised to discuss ending his nuclear and missile programs in a negotiated process. His guarantees were later confirmed directly by then–CIA director Mike Pompeo during an unprecedented meeting in Pyongyang in early April.7

Pompeo, who was sworn in on May 2 as Trump’s new secretary of state, said the upcoming meeting offered a “real opportunity” to negotiate an end to North Korea’s nuclear program. Kim, meanwhile, has already made some unilateral concessions. Before his summit with Moon, he announced that he had ended all nuclear and missile tests; was closing the country’s only nuclear-testing facility, under a mountain called Punggye-ri; and would accept the presence of US military forces in South Korea as part of a peace agreement.8

Over the weekend, Moon’s press secretary revealed that Kim had further pledged to abandon his nukes if the United States promised not to invade North Korea, and said he would allow international inspectors and journalists into the country in May to witness the dismantling of the test tunnels at Punggye-ri.9

“Through talks it will become clear that I am not someone who will fire nuclear [weapons] on the South, or over the Pacific, or target the US,” Kim was quoted as saying by South Korean officials. And much to the shock of Washington experts—who have long maintained that it could never happen—the day after the historic meeting, North Korea’s official media accorded prominent coverage to the summit and publicly affirmed Kim’s commitment to a nuclear-free peninsula.10

South Koreans, even those who fear and loathe the North because of its invasion during the Korean War, were moved to hear Kim speak for the first time. “We, who live so close by, are not enemies that must fight against each other, but are more families that share the same bloodline, who must unite,” the Swiss-educated Kim said in his short speech at Panmunjom. Many observers, even cynical Americans and journalists, noted that he had greatly softened his tone to communicate his desire for reconciliation.11

South Koreans were also touched by Kim’s gesture after he crossed the demarcation line. “I wonder when I can cross to the North,” Moon said in greeting him, according to Korean press reports. “Do you want to cross over now?” Kim replied, taking Moon’s hand as they stepped together into the North. “They made impromptu and casual crossings of the border that were unthinkable in the past,” Hyuk-Kyo Suh, a Korean-American activist in Virginia, told The Nation.13

But almost from the moment of that first handshake, the pundits who shape the US media’s coverage of North Korea were spinning the summit, and Kim’s outreach in particular, as a dangerous, even ominous, event. The groupthink was similar to the pundits’ initial freak-out in March, when Trump first said that he would meet with Kim.14

“Yada, yada, yada,” the perennial hawk Max Boot wrote disparagingly in The Washington Post about the “Korea summit hype,” adding that “there is very little of substance here.” Similar hot takes were offered by Nicholas Kristof and Nicholas Eberstadt in The New York Times, Jennifer Rubin in The Washington Post, Robin Wright in The New Yorker, and Michael O’Hanlon in The Hill. Their doubts were repeated and amplified as gospel by the usual critics on cable TV.15 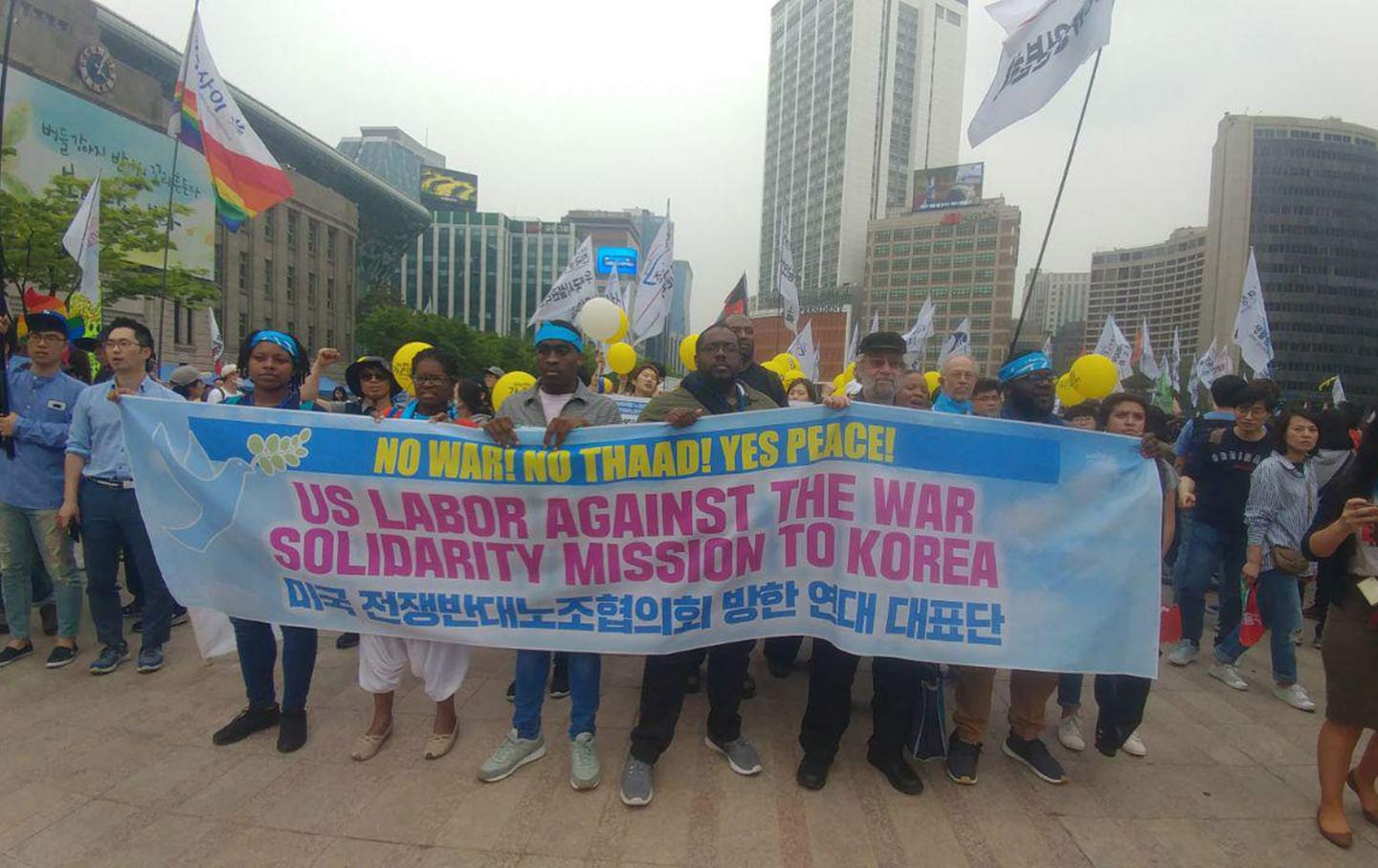 Members of US Labor Against the War demonstrate on May Day in Seoul in solidarity with Korean workers and unions. (Wol-san Liem)

The kicker came on Sunday, April 29, when the Times’ Mark Landler painted the Korean summit as an affront to US national-security interests. Citing every establishment pundit he could find, Landler argued that a resumption of diplomatic ties between the Koreas “will inevitably erode the crippling economic sanctions against the North,” while making it hard for Trump “to threaten military action against a country that is extending an olive branch.” It was depressing to see such overt cheerleading for US imperial control over Korea in the media.16

“We have a responsibility as US citizens to end this war.”

There is, of course, plenty of hard negotiation to come in order for the settlement by Kim and Moon to be realized. But if peace does come about, it won’t be due either to Trump’s hard-line policies or to the wailing of the Washington intelligentsia. Instead, it will be because of Moon’s diplomacy, as well as support from the mass movement that swept him into power in the “candlelight revolution” that toppled the hawkish government of Park Geun-hye last year. In a poll taken after the inter-Korean summit, a stunning 88.4 percent of South Koreans applauded Moon’s agreement with Kim, while the president’s own approval rating hit a whopping 85.7 percent. Koreans, it seems, have much more faith in the peace process than do their would-be allies in Washington.17

American activists played an important role as well. Women Cross DMZ, an international women’s collective led by its founder, Christine Ahn, along with feminist Gloria Steinem and US Army veteran and former diplomat Ann Wright, put the acute need for diplomacy on the table in 2015, when they traveled across the border with their South Korean allies to meet with their counterparts in the North. Korean-American civic and faith-based organizations have pressed strongly for a treaty to end the war. Peace groups like the Ploughshares Fund, the American Friends Service Committee, Win Without War, and Peace Action have taken the Korea issue to Congress, the White House, and the public.18

Meanwhile, the growing ties between South Korean citizen groups and US peace and antiwar organizations such as Code Pink, Veterans for Peace, and US Labor Against the War (which sent a delegation of trade unionists to Seoul after the summit and demonstrated with Korean workers on May Day) are creating a transpacific network that supports the Korean peace process and has melded into a strong voice to counter the hawks and naysayers in Washington.19

“We’ve learned from the South Korean movement about the awesome power of the people to mobilize,” Ahn told The Nation. “We have a responsibility as US citizens to end this war. After all, the US had a hand in Korea’s division, totally destroyed North Korea during the war, and since then has fueled a state of war on the peninsula. It’s on us to end the Korean War and help the Koreas come together.”20