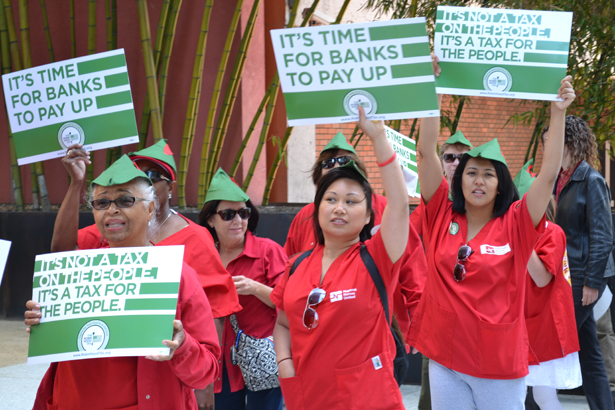 It’s 2024, and a group of four European bankers appears on a talk show to assess the impact of a financial transaction tax (FTT) enacted by eleven European Union nations in 2014. On the host’s right, representatives from France, Spain, and Germany tout the benefits of this “miracle tax”: money to fight extreme poverty, adapt to climate change, combat HIV/AIDS. And on the left, representing the UK (which currently opposes the tax), is a stodgy Brit, undoubtedly miffed that his country has missed out on the Continent’s decade of progress.

The star-studded, three-minute video, directed by David Yates (the Harry Potter series), features Javier Cámara (Talk to Her), Andrew Lincoln (The Walking Dead), Heike Makatsch (Love, Actually), Bill Nighy (The Best Exotic Marigold Hotel), and Clémence Poésy (Love, Actually). Nighy, who plays the frustrated Londoner, offers a succinct commentary: “This tiny tax that could do so much good is on the verge of becoming a reality. France, Germany and nine other European countries are about to introduce it. It would be deeply regrettable if the rest of the world were caught on the wrong side of history.”

At a news conference in Paris on February 19, German Chancellor Angela Merkel and French President François Hollande reiterated their support for the tax, announcing that they’d like to see the tax implemented before European Parliament elections in late May.

It’s refreshing to see European governments take steps to benefit the many at the (eminently reasonable) expense of the few. “Will the tax be borne by ordinary citizens?” Algirdas Semeta, European Commissioner for Taxation, asked rhetorically in The Guardian last year. “We have taken every measure to ensure that it isn’t. This is a tax on the financial sector, and 85% of liable transactions are purely between financial institutions. Day-to-day financial activities of citizens and businesses are outside its scope. Even if the financial sector passed on some costs to clients, the outcome would not be disproportionate.”

Also known as a “Robin Hood Tax,” a properly implemented FTT can benefit the economy from top to bottom. At the top of the financial food chain, the per-transaction fee offers a necessary check on speculation of the trade-for-the-sake-of-trading variety (“There’s considerable evidence suggesting that too much trading is going on,” writes The New York Times’s Paul Krugman). And an instrument that puts the brakes on rampant speculation and hyperactive trading—by raising the price of such behavior, in this case—is a good thing. In a 1936 analysis of the Great Depression, John Maynard Keynes noted that “the sins of the London Stock Exchange [were] less than those of Wall Street” in part because “the high brokerage charges and the heavy transfer tax payable to the Exchequer” made financial transactions more expensive in London than in New York. “It is usually agreed,” Keynes wrote drolly, “that casinos should, in the public interest, be inaccessible and expensive.”

And for the 99 percenters, the tax provides a much needed stream of revenue that can be used to combat poverty, climate change, our crumbling national infrastructure and more. Archbishop Desmond Tutu has written, “I urge G20 leaders…to introduce a tax on financial transactions to help low-income countries hit by the economic crisis and to protect poor people from climate change.”

Notably, such a tax is not unheard of in this country: Between 1914 and 1966, the United States levied a 0.04 percent tax on stock trades via a Stock Transfer Tax. While a handful of bills (all sponsored by Democrats) that include some form of an FTT are currently before Congress, the process (and progress) is obviously much farther along in Europe. In January 2013, eleven EU nations—Austria, Belgium, Estonia, France, Germany, Greece, Italy, Portugal, Slovakia, Slovenia and Spain—were authorized to proceed with the introduction of a coordinated FTT. A final agreement between the eleven participating governments is expected on May 6, 2014. It will be a sweet victory for Europe, and the spoils are manifold, not least of which is the estimated €31 billion ($42 billion) that the tax is expected to generate each year.

So can we duplicate the victory here? Can we replace some of the Liar’s Poker ethos that got us into this mess? One idea, Senator Tom Harkin (D-Iowa) and Rep. Peter DeFazio’s (D-Oregon) Wall Street Trading and Speculators Tax Act, “would target financial trading and complex transactions undertaken by financial and investment firms,” and the Congressional Joint Tax Committee has estimated that a similar proposal would bring in over $350 billion over ten years. Says Harkin, “[T]here is no question that Wall Street can easily bear this modest tax. This Wall Street tax is a simple matter of fairness and fiscal sanity.”

What can people do to promote a Sweet Victory here in America? Sarah Anderson, Global Economy Project Director at the Institute for Policy Studies in Washington, urges citizens to ask their representatives in Congress to co-sponsor the Harkin/DeFazio bill or Rep. Keith Ellison’s (D-Minnesota) Inclusive Prosperity Act. The White House, heretofore unsupportive of FTT proposals, could be spurred to action if it perceived some real momentum building on Capitol Hill. Anderson also encourages people to sign a petition in support of a Robin Hood Tax. The goal is to collect 1 million signatures (There are currently about 640,000 so far), leading to what might be the most popular tax in the history of the world.