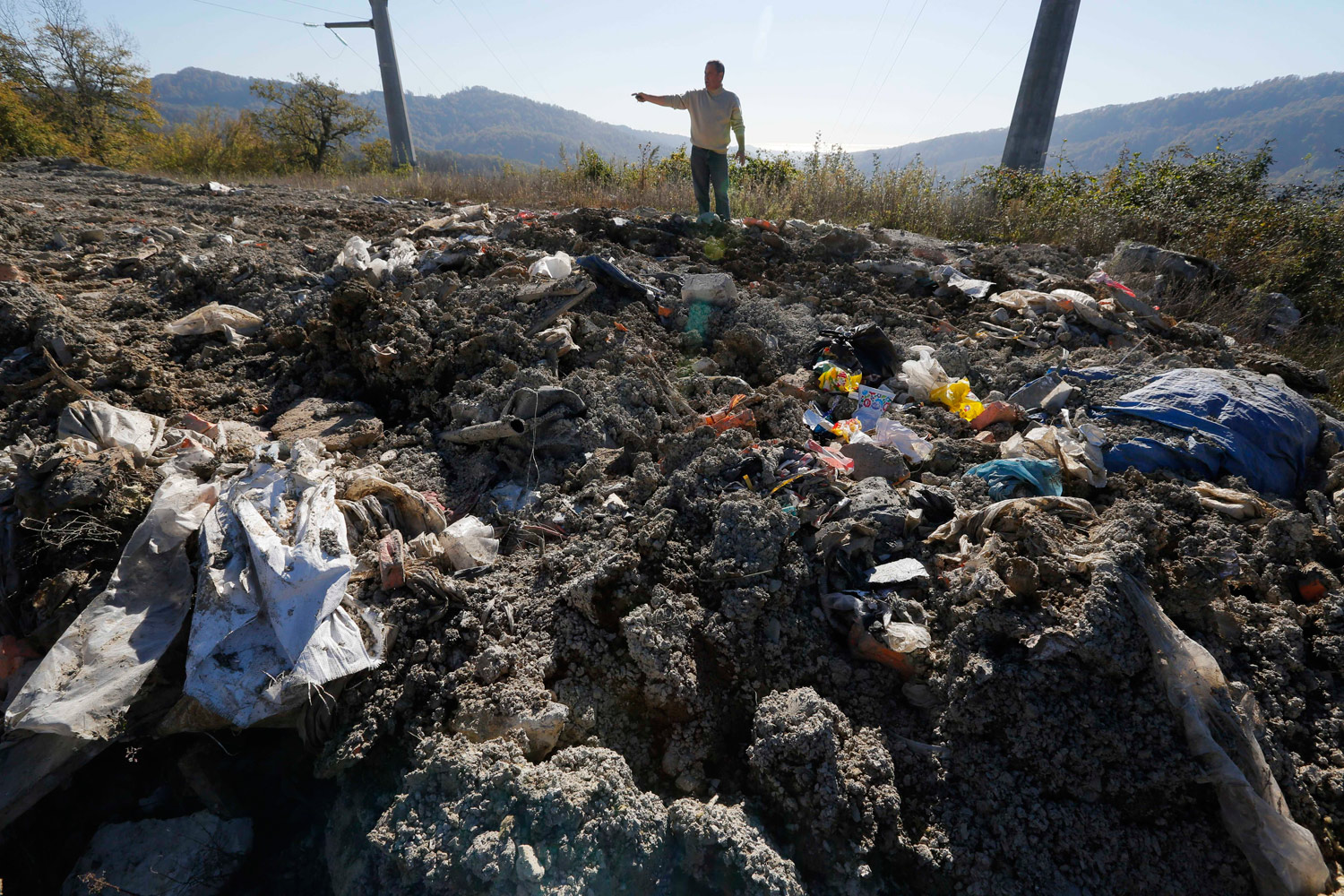 The sochi olympics are already infamous for being the most expensive in history. But corruption-inflated construction contracts aside, there is also a huge environmental and human cost to building the Games from scratch, at breakneck speed. It can’t be calculated in a single figure, but it’s found in places like the Sochi-area village of Uch-Dere, where smoke from underground fires pours out of a sprawling construction waste dump polluting the neighboring river; in the village of Akhshtyr, where limestone quarrying has dried up the wells and covered residents’ fruit in dust; and in the village of Vesyoloye, where construction waste dumping triggered a landslide that ruined homes. The activists who try to fight these abuses have been harassed, jailed and, in the case of at least one environmentalist, looking at prison time.

“The Russian government took on an obligation to protect the environment and it didn’t fulfill it, along with many other obligations to the residents of Sochi. That’s the worst part,” says Yevgeny Vitishko, an activist with Environmental Watch on North Caucasus (EWNC). In its Sochi bid, Russia pledged to hold the cleanest Olympic Games ever under a “Zero Waste” program, a promise that now rings hollow.

Much has been made of the fact that the Winter Olympics will be held in subtropical Sochi, which stretches ninety miles along the Black Sea in Russia’s warmest region. Despite having virtually no stadiums or ski hills, the location was championed by President Vladimir Putin, who has staked his reputation on the Games’ success. Nearly everything was built from scratch, at tremendous cost.

Besides its warm climate, the Sochi area is known for its ecological richness and diversity. In 1999, UNESCO declared the Caucasus State Biosphere Nature Reserve and parts of the Sochi National Park a world heritage site, noting natural phenomena including caves, high-altitude lakes, rivers, waterfalls, and abundant flora and fauna. Many types of orchids have been cataloged here, and dolphins are a common sight along the beaches.

But the Worldwide Fund for Nature Russia, Greenpeace Russia, EWNC and others have been warning of the harmful ecological effects of Olympic preparations, including recent legislative changes easing regulations on construction in environmentally protected areas. “We thought that the Games were inappropriate in the places they chose,” Vitishko says.

The coastal cluster of venues was built atop the Imeretinskaya Lowland, renowned for its rich bird life. With the start of Olympic building, much of it was filled in with construction waste, and now the 40,000-seat Fisht Olympic Stadium, which will host only the opening and closing ceremonies, sits in the lowland.

Meanwhile, EWNC activist Vladimir Kimayev says the group has found eight quarries of questionable legality around Sochi, including limestone quarries in Sochi National Park that the prosecutor general confirmed had partially filled in a stretch of the Psou River. In a 2011 letter, the prosecutor general’s office said it had brought charges over two illegal quarries there. One was operated by state-owned Russian Railways on land rented by the state Olympic construction company Olympstroy, as part of the highway and railroad project Russian Railways was building between the coastal and mountain clusters. As of mid-January, these quarries were still operating, according to Kimayev.

EWNC also knows of 1,500 unsanctioned waste dumps around Sochi, of which about two dozen are large-scale, and has been able to document four illegal dumps receiving Olympic construction waste, Kimayev says.

Despite promises from the mayor of Sochi and the head of Olympstroy that “not one resident” of Sochi would suffer in the lead-up to the Games, Human Rights Watch estimates that about 2,000 families have been displaced. Although most received compensation, HRW says that many were under-compensated for the loss of their homes and the income they had earned growing vegetables or renting rooms. Others were not compensated at all, including Andrei Martynov and Natalya Martynova, who like many had never been able to obtain the proper documentation for the land they had lived on near the beach since 2005. After a long legal battle, their home was bulldozed to make way for the coastal cluster. The pair now share a room in a Soviet-era hotel.

The unfortunate poster child of Olympic destruction is the village of Akhshtyr, in the hills above Sochi. According to locals, the opening of two limestone quarries, a construction dump and a road caused their wells to run dry five years ago, leaving them dependent on semiweekly water deliveries. The village road was paved for a near-constant stream of dump trucks, one of which struck and killed an area man, locals say. Thick dust churned up by the trucks covers the fruit in the orchards, making it unfit for sale and depriving many of a key source of income, including resident Alexander Koropov. He and others say they can’t sell their houses because of Olympic preparations. “I curse the Olympics because I became poor. I became an Olympic bum,” Koropov says.

Russian Railways, which is building much of the Olympic infrastructure, has been dumping waste in the illegal landfill in Akhshtyr. Waste is prohibited in the area because it could contaminate the nearby Mzymta River, the source of much of Sochi’s drinking water. “The tea plantation became a waste dump. They spit on us,” resident Viktor Kalinin tells The Nation. The regional Environmental Protection Agency reportedly fined Russian Railways $3,000, but the dump was still in use as of mid-January, according to Koropov.

On a recent afternoon, Andrei Antonyan was waiting for his daughter to return from school at the end of a path leading from the new highway between the coastal and mountain clusters. That project cost $8.7 billion—more than the entire Winter Olympics in Vancouver. Although Russian Railways had, according to a letter seen by The Nation, planned a road connecting the busy highway to the village, it built only a twisting footpath surrounded by barbed-wire fences and a crosswalk that Human Rights Watch has called unsafe.

“The Olympics are not bad, but they are violating the rights of the people who live here,” Antonyan says. “They didn’t build a connecting road, but instead cut us off.”

Human Rights Watch, which has been making complaints about conditions in Akhshtyr to the International Olympic Committee since 2009, says the Sochi 2014 Organizing Committee has repeatedly and falsely claimed that the water supply problem has been resolved. Koropov says it hasn’t.

The problems in Akhshtyr are common in other parts of Sochi, Human Rights Watch researcher Yulia Gorbunova told The Nation. “We have heard many complaints from residents over dust, constant noise and unsanctioned waste dumps,” she says. “There has been significant damage to the environment.”

Another unsanctioned landfill is in Uch-Dere, according to local activist Margarita Kravchenko. The trash in this village—once the location of holiday homes for the Russian royal family—pollutes the nearby Bitkha River. “It’s our resort city, and they’re destroying it. We need to protect what’s left,” Kravchenko says. “The Zero Waste program has broken down.”

Kravchenko says she lost her job as a sales manager last year when local police inquired about her at work, and many other activists have also suffered retribution. In October, EWNC leader Andrei Rudomakha was detained on his way to Sochi and later prohibited from leaving the Krasnodar region in connection with a year-old investigation, which was opened after he was quoted criticizing a judicial decision against a fellow activist. Alexander Valov, editor of the site BlogSochi, which features posts by local activists, was sentenced in December to fifty hours of corrective labor for allegedly planning a protest that never took place.

In November, police stopped Vitishko twice between Krasnodar, the regional capital, and Tuapse, near Sochi, and accused him of violating his curfew, which stipulates that he must be home by midnight and notify authorities in advance of any trips out of town. In December, a judge ruled that Vitishko must serve his three-year suspended sentence, which he received for vandalism charges brought against him after a 2011 protest at a mansion in a forest preserve on the Black Sea, allegedly built by the governor of the Krasnodar region. (Fellow protester Suren Gazaryan fled Russia after the action under threat of attempted-murder charges and was granted political asylum in Estonia.)

Human rights lawyer Alexander Popkov, who is defending Vitishko, says the ruling is part of a larger intimidation campaign by the authorities. “They are pushing us more often, pressing our activists, and it’s probably connected with the Olympics,” he says.

“We’ve absolutely documented, for over a year now in the run-up to the Games, deliberate actions to target, harass and intimidate critics of the Olympics and Olympic preparations,” says Jane Buchanan, associate director of the Europe and Central Asia Division of Human Rights Watch, who has been traveling regularly to Sochi for the past five years.

On a train to a recent court hearing for Vitishko, an Olympic construction contractor who would identify himself only as Igor overheard activists talking about environmental damage. “It’s not possible to build this from nothing in five years without some violations,” he argued.

But the “you can’t make an omelet without breaking a few eggs” defense doesn’t appease those who have already felt the human and environmental costs of the Games. “Sochi was a health resort for all of Russia,” Yulia Naberezhnaya, an EWNC activist and member of the Russian Geographic Society, told Igor. “Now I don’t see any prospects for the city as a health resort.”

Many activists and locals said they won’t be attending the games because of the high ticket prices—or as a matter of principle. Kravchenko asks, “What respect can I have for this after what the authorities did to our people?”