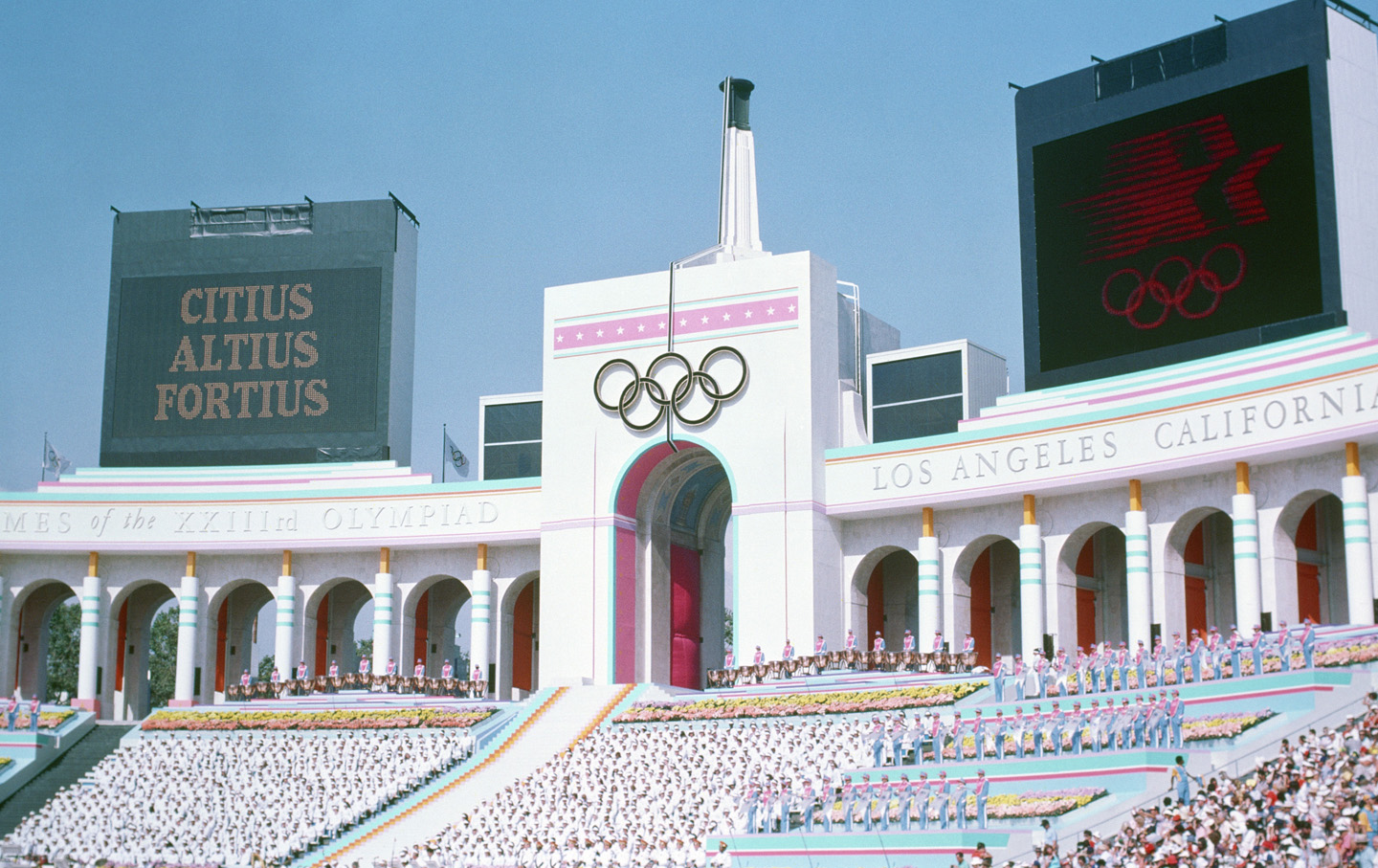 The opening ceremonies of the 1984 Los Angeles Summer Olympics

On Friday, the Los Angeles City Council is expected to vote on whether the city should advance with its bid to host the 2024 Summer Olympics. Things move quickly in the world of the Olympics. Just last month, Boston became the first American city in almost 45 years to say no to hosting the Games. When International Olympic Committee (IOC) President Thomas Bach announced that he still expected a US city to submit a bid for the 2024 Games, the US Olympic Committee (USOC) scrambled for an alternative and soon settled on Los Angeles.

Earlier this week, the city’s organizing committee, LA2024, released a copy of its bid. LA2024 projects that the Games will cost $4.1 billion ($4.7 billion with contingency and insurance), but will bring in $4.8 billion from ticket sales, corporate sponsorships, and broadcast rights, netting a projected $161 million surplus. The proposal outlines an Olympics that would rely on many existing venues, such as the Coliseum and the Staples Center, while building an Olympic Village on the LA River waterfront that would be converted into residential housing after the Games.

Despite these sunny projections, economic experts are far less sanguine about the benefits of the Olympics. According to Philip Porter of the University of South Florida, an economist who studies such mega-events, “every time we’ve looked—dozens of scholars, dozens of times—we find no real change in economic activity.” Robert Barney, founding director of the International Centre for Olympic Studies at the University of Western Ontario, has argued that, when you count for indirect costs, “there has never been an Olympic Games that has made a profit.” And Andrew Zimbalist of Smith College, an outspoken critic of Boston’s bid and the author of the new book Circus Maximus, has described the idea of hosting the Olympics without a massive infusion of public funds nothing but a “pipe dream.”

Boston just rejected the Olympics. LA, it’s your turn. Los Angeles residents, you should say no to the Olympics. And, just as importantly, you can.

Olympic boosters often cite the economic success of the 1984 Summer Olympics, also hosted in Los Angeles, when arguing for why the Olympics are a great opportunity for host cities. This will surely be brought up as why LA should host again. However, this was a unique case: Los Angeles was the only bidding city that year, giving officials the leverage to reject the taxpayer guarantee that the IOC requires, which ensures the host city will pick up the tab for any cost overruns.

In the 2024 bidding war, with cities like Paris, Hamburg, Budapest, Rome, and Toronto competing to give the best deal to the IOC, that leverage no longer exists. “If you’re the only bidder, you can tell the I.O.C. how it’s going to be,” Stefan Szymanski, a professor at the University of Michigan who conducted an independent audit of London’s 2012 Olympics, told the Los Angeles Times. “If there are three or four bidders, the I.O.C. tells you how it’s going to be.” Los Angeles—and any other city in the running—will have to agree to protect the IOC from cost overruns and serve as a guarantor for any Olympic construction. What’s the chance of such cost overruns? 100 percent.

The IOC doesn’t merely want control of your city’s public purse: It wants control of your city. The IOC asks for a network of designated “Olympic lanes” on streets and highways so that the corporate titans and aristocrats of the IOC can cruise from venue to venue while residents are stuck in traffic. They also want control of all public advertising space in the vicinity of the Games—on buses and trains, in airports and on highways—draining funds from already weak transportation budgets. The IOC even demands that local bid committees have the authority to sign contracts on behalf of the city, a stunning outsourcing of governance to a private organization. (A senior aide to Mayor Eric Garcetti has already left to work for the bid committee).

Perhaps the most troubling way the Olympics will take over your city is through the militarization of public space. Over the past year, as police violence against the African-American community has dominated national media, politicians have taken to talking about “community policing,” which promotes having police get to know the residents in the communities in which they work in order to work in partnership. However, the National Security Special Event designation that comes with the Olympics means handing over control of local policing to the Secret Service, the Department of Homeland Security, and the FBI. Increased patrols and use (and abuse) of stop-and-frisk will exacerbate the problems of over-policing, and the immense budgets for Olympic “security” will provide police forces and security officers with new weapons and surveillance tools that will leave a legacy far beyond the three weeks of the Games.

Local politicians and business leaders will talk about the “legacy” that hosting the Games can offer. But legacy for whom? Like Boston, Los Angeles is facing a gentrification problem, with low- and middle-income residents being increasingly priced out of their neighborhoods. The Olympics will only exacerbate the problems that currently exist. During past Games, landlords have kicked out their tenants in order to profit from short-term rentals to Olympic tourists. (Airbnb’s recent deal with Rio2016—it will provide 20,000 rooms for the 2016 Summer Olympics—signals that this phenomenon is very likely to continue). Promises of affordable housing regularly fail to materialize, and neighborhoods around Olympic venues have historically seen rent spikes. Moreover, cities use the Olympics as an opportunity to engage in social and economic “cleansing,” criminalizing poverty and homelessness instead of providing necessary social services.

It’s important for activists to say “no” to the Olympics early and often because the acceleration of gentrification occurs even with failed bids. When a group of developers, real estate moguls, financiers, construction CEOs, and other elites get together to form their vision for a city, that vision will be propelled forward—Games or no Games. We already see this in Boston; despite the utter failure of Boston 2024, Mayor Marty Walsh plans to go full speed ahead with parts of the Boston 2024’s elite vision for the city, including the creation of two new upscale neighborhoods, aided by heavy tax breaks for developers, where the Olympic stadium and Olympic Village would have been. (Widett Circle, which had been designated as the site home for the Olympic Stadium, is already home to a business co-op that provides 800 good-paying jobs. To the mayor and the developers that have eyed the land for decades, that means it’s “underutilized.”) Moreover, the head of the mayor’s “Office of Olympic Planning” was just appointed director of the city’s master-plan process, Imagine Boston 2030.

Beating back the Olympics will take a variety of tactics. Here are a few that proved useful to us.

Social Media: During Mayor Walsh’s press conference the morning before Boston’s Olympic bid was pulled, he derided the opposition as “10 people on Twitter.” The opposition—as any poll would show—was far greater than 10 people, with 53 percent of Metro Boston opposing hosting the Games. But by democratizing the media landscape, tools like Twitter and Facebook were essential to us and other Olympic opponents. Through social media, you can connect with other anti-Olympics activists in your own city as well as those from past host cities (who are always happy to help). You can open up event spaces to include those who are not physically present, and you can debunk misinformation from Olympics boosters in real time. You can use social media to challenge false narratives put forward by the press, show the force of opposition, or simply build community, something vital for any movement to succeed.

Public Records Requests: The decisions that went into the creation of each cities’ bid, like Boston’s, happened—and are happening—behind closed doors. If public officials will not be transparent, then you can and should force transparency on them. Massachusetts public records law is among the weakest in the country, but activists were still able to use public records requests to shape news coverage and public debate. Notably, public records requests here have been able to catch Boston 2024 in lies, most notably their claim that no public funding would be used for the construction of Olympic venues. They also exposed the blurred lines between Boston 2024 and the Mayor’s Office, as the Mayor’s Office deferred to Boston 2024 on how to respond to public records requests and questions from the press. Traditional news outlets will have some solid investigative journalism, but activists can and should dig deeper.

Protests: Online activism is important in today’s media landscape, but so is being present. If and when your city starts having meetings about the bid, be there. When LA 2024 has its own events, be there. When your city council has a hearing, be there. Make your presence known both inside and outside any event and any meeting. Be early, be vocal, and be direct so that dissent is strong and unambiguous.

Since the USOC pulled Boston’s bid, there has been a wave of news articles about how cities are increasingly seeing through the scam of the modern Olympics. LA activists, it is up to you to keep the momentum of this movement going. And we’ll be here, on the other coast, standing with you.