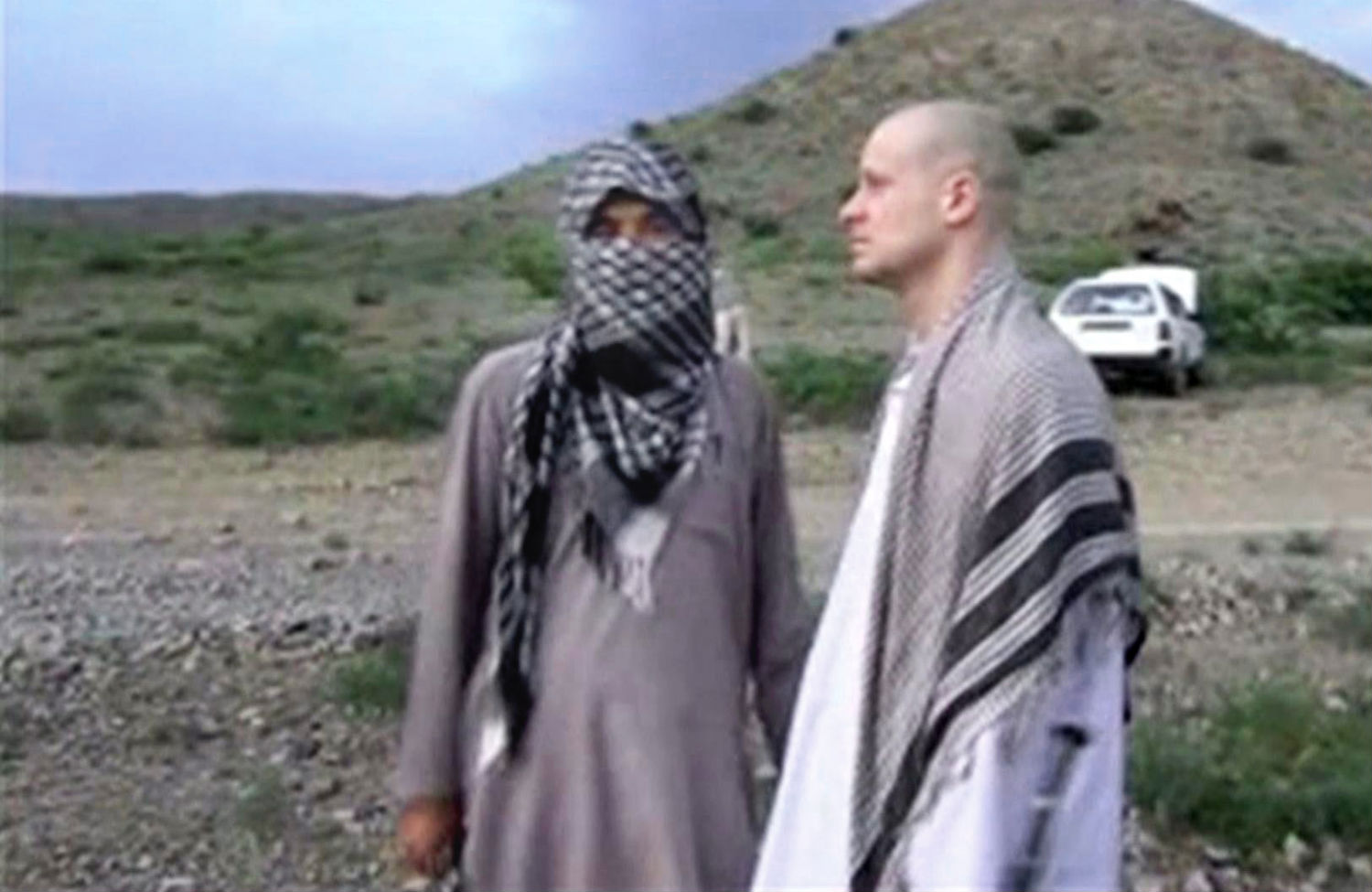 One question about the controversy over the release of Sgt. Bowe Bergdahl in exchange for five Taliban prisoners held at Guantánamo is: If it’s clear that various GOP hawks, including the irrepressible and irresponsible John McCain, will go all out to use the story to paint President Obama as an appeaser, a negotiator-with-terrorists, and worse, then will former Secretary of State Hillary Clinton join them? Because back when she was secretary of state, Clinton opposed the exchange for Bergdahl, and on the same grounds that Republicans are blasting the deal now.

Fact is, talking to the Taliban—indeed, negotiating with them, freeing some prisoners and perhaps offering them some power in a rebalanced government of Afghanistan—is the smartest strategy for making sure that Afghanistan can be stabilized by 2016. And if the Bergdahl deal leads to that outcome, then it will have been a very, very smart thing. In the meantime, if Bergdahl—assuming that he isn’t permanently traumatized by his years of captivity—speaks out about the craziness and illegitimacy of the war since 2001, then he might become a hero to and spokesman for the antiwar forces in the United States.

Already, the nonsensical furor over Bergdahl’s release, after five years of being held as a prisoner by the Taliban in Pakistan, has done the impossible: it’s eclipsed another nonsensical non-scandal, the one over Benghazi. And if the Benghazi flap is designed to undermine Clinton’s presidential posture, the Bergdahl flap may boost her image—even though Clinton has now come out defending the deal that she opposed, privately, to support it publicly.

The best place to start in understanding the Bergdahl story—and, after all, both he and the efforts to free him have been in the news for half a decade—is with Michael Hastings’ brilliant piece in Rolling Stone back in July 2012. (Disclosure: I knew Hastings, who died tragically in a car accident, and we both wrote for Rolling Stone about Gen. Stanley McChrystal’s insurrection against the White House. It was Hastings’s piece, of course, that brought McChrystal down.) As Hastings makes clear—in a piece called “America’s Last Prisoner of War”—Bergdahl was a questioning, home-schooled Idahoan who joined the army and went to Afghanistan because he thought he’d be doing good, but when he arrived he was quickly disillusioned by the brutality he witnessed, by the sheer incompetence and witlessness that he experienced by American officers and others.

Once Bergdahl gets home, gets treatment and counseling, and recovers from his harrowing captivity, we may learn more about him and about his story. Clearly, he hears the beat of a different drummer—and what he expected or hoped to accomplish by walking off base in 2009 into the hands of the Taliban—who apparently captured him while he was defecating—isn’t known, exactly. Whether he was simply a quirky loner who snapped, or whether he was carrying out some sort of protest aimed at bringing home the insanity of the Afghan war, or something else, isn’t clear. But, in emails to his family, quoted in the Rolling Stone article, Bergdahl fairly explicity denounces the war and America’s military. In one, worth quoting at length (edited slightly for grammar), he wrote:

The future is too good to waste on lies. And life is way too short to care for the damnation of others, as well as to spend it helping fools with their ideas that are wrong. I have seen their ideas and I am ashamed to even be American. The horror of the self-righteous arrogance that they thrive in. It is all revolting.… In the US army you are cut down for being honest… but if you are a conceited brown nosing shit bag you will be allowed to do what ever you want, and you will be handed your higher rank…. The system is wrong. I am ashamed to be an American. And the title of US soldier is just the lie of fools.… The US army is the biggest joke the world has to laugh at. It is the army of liars, backstabbers, fools, and bullies. The few good SGTs are getting out as soon as they can, and they are telling us privates to do the same.…

I am sorry for everything here.… These people need help, yet what they get is the most conceited country in the world telling them that they are nothing and that they are stupid, that they have no idea how to live.… We don’t even care when we hear each other talk about running their children down in the dirt streets with our armored trucks…. We make fun of them in front of their faces, and laugh at them for not understanding we are insulting them.

Indeed, from the start Berghdal told family and fellow soldiers that he might just walk off into the mountains one day. And so he did.

That Bergdahl was apparently a disillusioned, angry soldier who had come to believe that the war was crazy didn’t dissuade President Obama and the White House from seeking to arrange his release before the American force draws down to a small presence next year and disappears entirely in 2016—nor has it endeared Bergdahl to some in the military command, the Pentagon and Congress. The controversy over whether to trade prisoners to win his release has raged from the start. Indeed, in one hilarious passage in Hastings’ piece, he recounts how McCain, fuming at the idea of letting the five Taliban officials go, said: “They’re the five biggest murderers in world history!” To which then-Senator John Kerry replied, incredulously: “John, the five biggest murderers in the world?”

Now, partly spurred by claims from some in the armed forces that several US troops died seeking to find and perhaps free Bergdahl, McCain is feigning outrage—even though it appears that in the end McCain ended up, privately, supporting the idea of trading for the release. Now, though McCain said of the deal, “It’s done,” he called it “ill-founded,” a “mistake,” and “unacceptable,” adding that those released are killers and the “hardest of the hard-core,” a charge that has been at least disputed.

In the most extreme case, as Hastings reported, some hawks urged the Taliban to dispense with Bergdahl:

Ralph Peters, an action-thriller writer who serves as a “strategic analyst” for Fox News, took to the air to condemn Bowe as an “apparent deserter.” The Taliban, he declared, could save the United States on “legal bills” by executing him.

Obama, to his credit, isn’t waffling. Of the deal, he said:

[We have a] pretty sacred rule and that is we don’t leave our men or women in uniform behind and that dates back to the earliest days.… Regardless of the circumstances, whatever those circumstances may turn out to be, we still get an American soldier back if he’s held in captivity. Period. Full stop. We don’t condition that.

Still, The New York Times portrays the White House as “on the defensive” about the Bergdahl story, thanks to the fury unleashed by Republicans and conservative radio and TV blabbers.

The Washington Post, in its behind-the-scenes account of the internal debate over the swap, notes that in the White House the idea of a deal was explicitly linked to the notion of encouraging reconciliation with the Taliban—and that Hillary Clinton was against it:

During the same debate, officials were considering the emerging prisoner-exchange proposal. White House advisers believed that a successful exchange would not only free Bergdahl but would also encourage moderate Taliban members to take an Afghan-led reconciliation process seriously.

But Panetta and other officials—including Defense Secretary Robert M. Gates, Secretary of State Hillary Rodham Clinton and Director of National Intelligence James R. Clapper Jr.—opposed the terms of the proposed prisoner exchange, according to the official.

Clinton replied in writing to the written concerns of lawmakers in between the various meetings, according to House aides. The contents of her responses were deemed classified and were not available for review by reporters, the aides said Tuesday. Clinton, now considering a run for president in 2016, on Tuesday publicly endorsed the deal to free Bergdahl that the official said she once privately opposed.

Let’s hope that as Clinton does her nonstop book tour after the release next week of Hard Choices, she’ll be grilled on exactly that flip-flop.