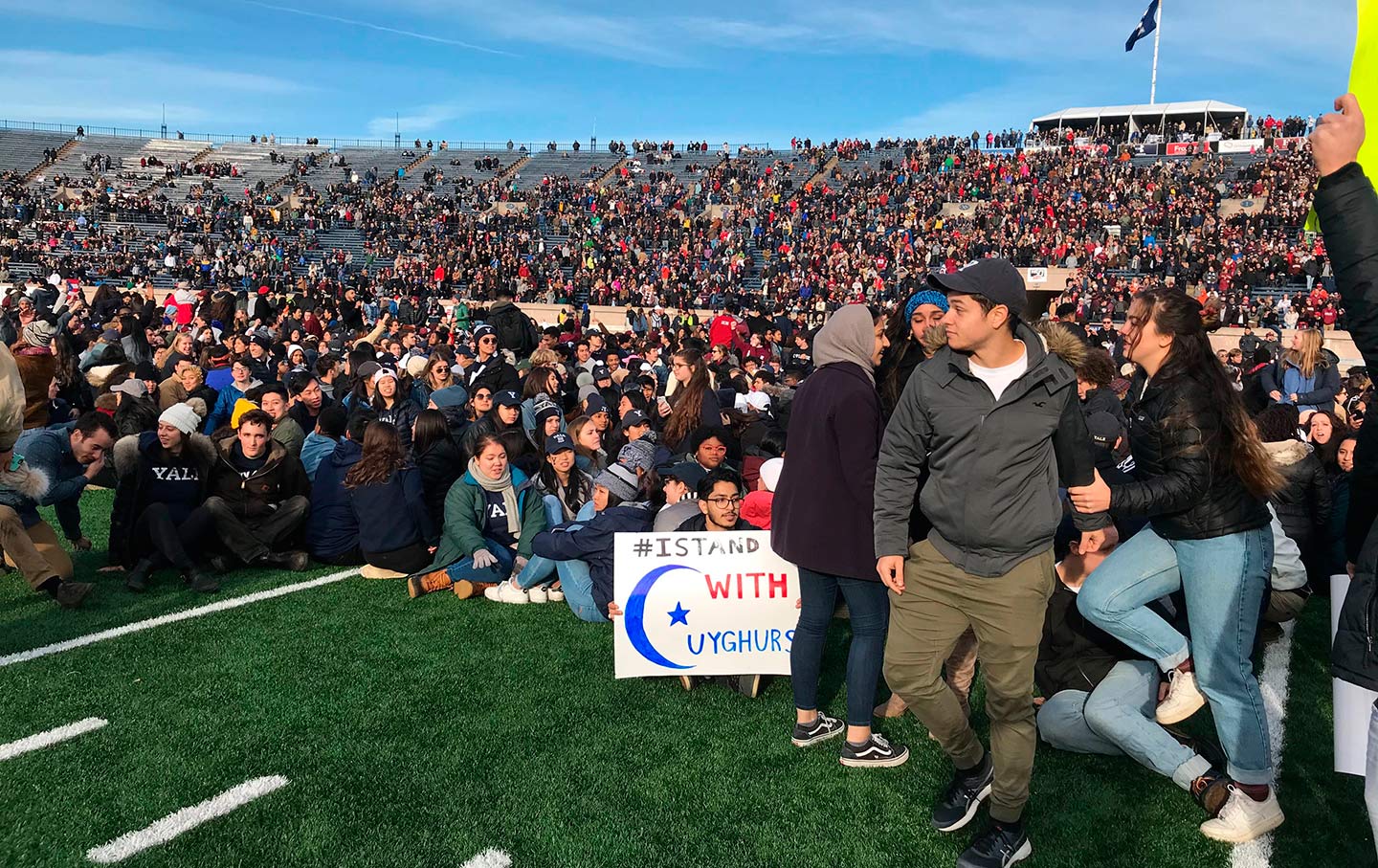 The oldest rivalry in college football took a back seat to a 21st-century movement aimed at saving the future on Saturday. Hundreds of students stormed the New Haven field at this year’s Harvard-Yale game, aka the Yale Bowl, delaying the second half by roughly an hour. The students, who represented both schools, were protesting the universities’ investments in fossil fuels and Puerto Rican debt holdings.

This occupation of the football field started with fewer than 100 students, but then more protesters joined from the stands, creating a visual of more than 500 young people filling the gridiron, chanting in defiance as security encircled them. The crowd responded with a mix of cheers and extremely angry boos. After a rush by security, many students dispersed. Some remained and were arrested. As the on-field action continued, ESPN (which was broadcasting the game) cut away from the protest. That didn’t stop it from making international news.

The protest enjoyed the support of some of the football players, who wore orange armbands in solidarity with the struggle. Harvard’s captain, defensive back Wesley Ogsbury, filmed a viral statement of solidarity that said:

Today, we faced off in the game, competing with our great rivals from New Haven, Yale. But at this moment, both our institutions continue to invest in the industries destroying our futures. And when it comes to the climate crises, no one wins. Harvard and Yale can’t claim to truly promote knowledge while at the same time, supporting the companies engaged in misleading the public, smearing academics and denying the truth…. That’s why we’re joining together with our friends at Yale to call for change. In solidarity with my friends at Fossil Fuel Divest Harvard and Fossil Free Yale, who disrupted today’s proceedings, many of my teammates and I are wearing orange wristbands, the color of the Divest movement…. We’re coming together to call on Presidents [Lawrence] Bacow and [Peter] Salovey, to divest from the fossil fuel industry now, for the sake of our generation.

Josephine Ingall, a protesting student at Yale university, told The Nation that this was part of “a long term strategy of escalation” of struggle at both universities. “Harvard and Yale are complicit in the climate crisis and have never instructed their fund managers to divest from Puerto Rican debt. We believe that business can’t go on as usual. Nobody wins when we’re complicit in crisis…. We have thousands of people sitting here in the Yale Bowl ready to enjoy a game and continuing to go about their daily lives as if the climate crisis is not actively encroaching, that it’s not already having a disparate impact on marginalized folks all over the world, especially people of color, especially people in the Global South, especially in places like Puerto Rico whose precarious position is being exploited by institutions seeking to profiteer off their debt—like Harvard and Yale are. We know we can do better. We see an opportunity to do better and we need to pressure our universities to do that.”

As for the scattered boos in the stands, another student protester from Yale, Jordi Bertrán, said, “I definitely expected to have mixed reactions, for sure, but I think it’s a sacrifice that I know I’m willing to make because I think our message is important and clear. Even though we’re privileged enough to not feel the effects of climate change to the extent that people in the Global South do, we want to bring this to attention to people who maybe won’t feel affects with climate change until much, much later.”

Both students wanted to make clear that this was not a protest for “weekend activists.” It was an event part and parcel with a much broader struggle to disrupt “business as usual” on campus, and they would be back. Sports, beware: This is far from over.

Dustin Foote contributed the on-the-ground reporting and quotes for this article.