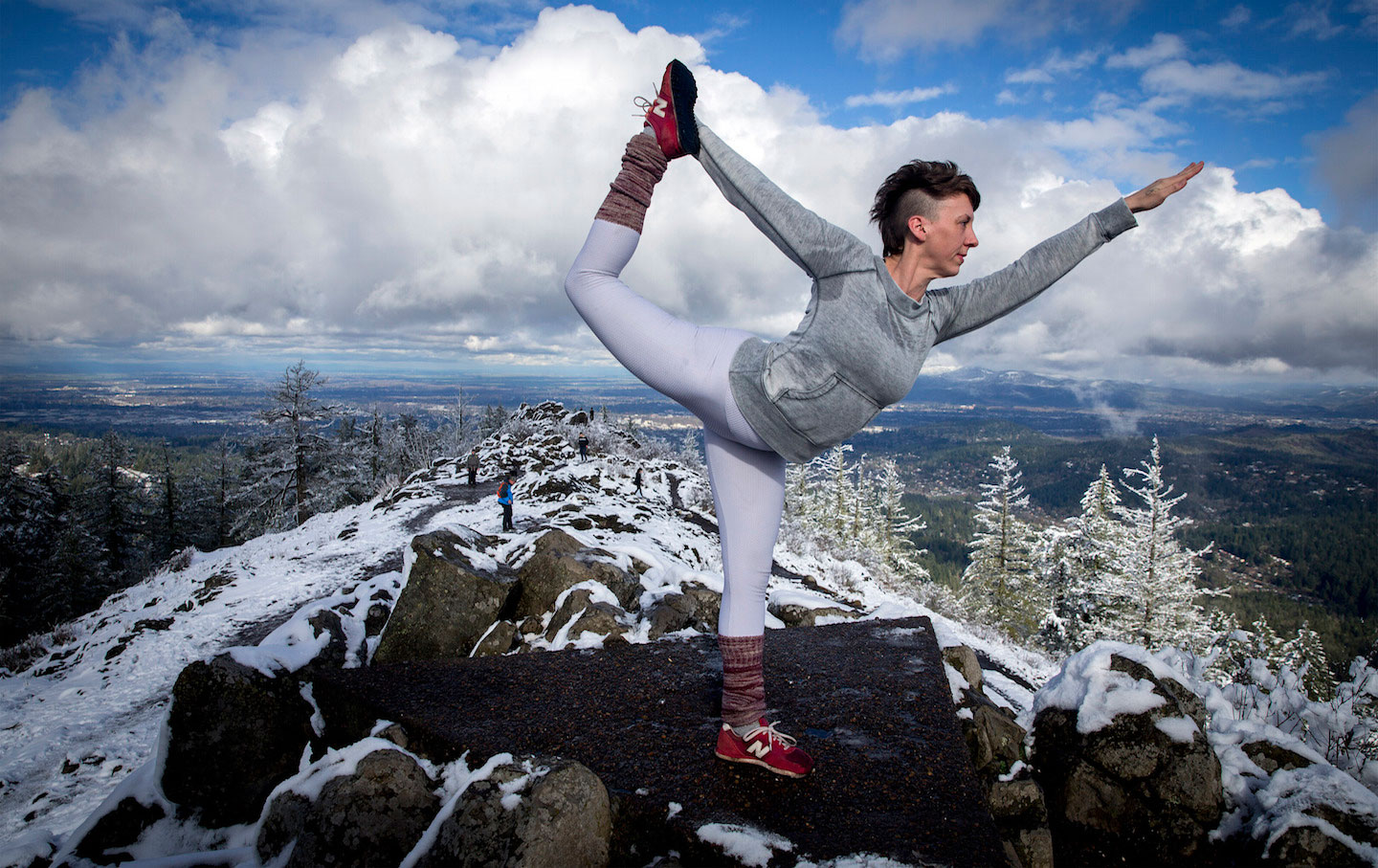 A woman practices yoga at the top of Spencer Butte, Oregon, 2019. (Photo by Andy Nelson / The Register-Guard via AP)

In eras that long for salvation, hucksters are likely to flourish. It can be difficult, after all, to tell a savior from a con man. Fraz Penzig, the most prominent in an ensemble cast of protagonists in Sam Lipsyte’s latest darkly comic novel, Hark, lives in such an age, which is basically our own, give or take a few years and a fresh world war. Before the events of the novel begin, Fraz wanders into a bookstore, “depressed about the political situation” and seeking solace in the form of “a book that was either about the political situation or not about the political situation at all.” He finds no such thing. Instead, he discovers something even better: Hark Morner.

Hark is the inventor and practitioner of “mental archery,” which isn’t an answer to the world’s woes so much as a practice for coping with them. Or, as Hark puts it repeatedly, generally to the frustration of whomever he means to convince: “I’m trying to help people focus.” (“Focus on what?” asks Meg, a waffle-manufacturer employee soon to become a disciple—to which Fraz, now a devoted Harkist, responds, “He doesn’t do what. What drives hearts apart.”) Hark isn’t interested in division, though he’s not too concerned with unity, either. His is a message fit for all people, in part because it’s not a message at all. “The message, which does not officially exist, is pure,” Lipsyte writes.

Mental archery consists of a series of yoga-like poses with names like “Priapic Centaur,” “Arc of Totality,” and “Moonlight Diana Number Three.” The bows are metaphorical, though Hark does use a real one as a prop to engage audiences. Accompanying the poses and the archery-based lingo and presentations (“unstring your bow”; “Apple, yes. Boy, no”) is a hodgepodge mythology—drawn from sources as disparate as the ancient Assyrian and Greek pantheons, Mongolian history, and Swiss folklore—that Hark employs to hawk his program. Like any good would-be messiah, he makes use of the potentially transcendent vernacular of his time, the argot of self-help mindfulness, and spins banality and pseudo-history into stirring prophecy. His speeches show off Lipsyte’s linguistic gifts, which thrive when tasked with animating a potentially comic syntax.

Hark’s sales pitch proves irresistible to many who hear it, and before long he has amassed a devoted following, which includes Fraz as well as Kate Rumpler, an orphaned heiress who has been devoting her days to the “virtuous hobby” of ferrying organs for transplant and now funds the mental-archery operation; and Teal Baker-Cassini, fresh off a prison sentence for embezzling funds from a former employer, “a major online retailer” whose founder, she discovered, “funneled his profits into a fascist think thank.” These drifters have found a source of hope in Hark, and they wish to spread the good word. Never mind that Hark insists that all he has to offer are, as Lipsyte writes on the first page, “a few tricks, or tips, to help people focus.” The Harkists know better than to take their leader entirely at his word, and they’re happy to proselytize as they await whatever revelation is still to come. 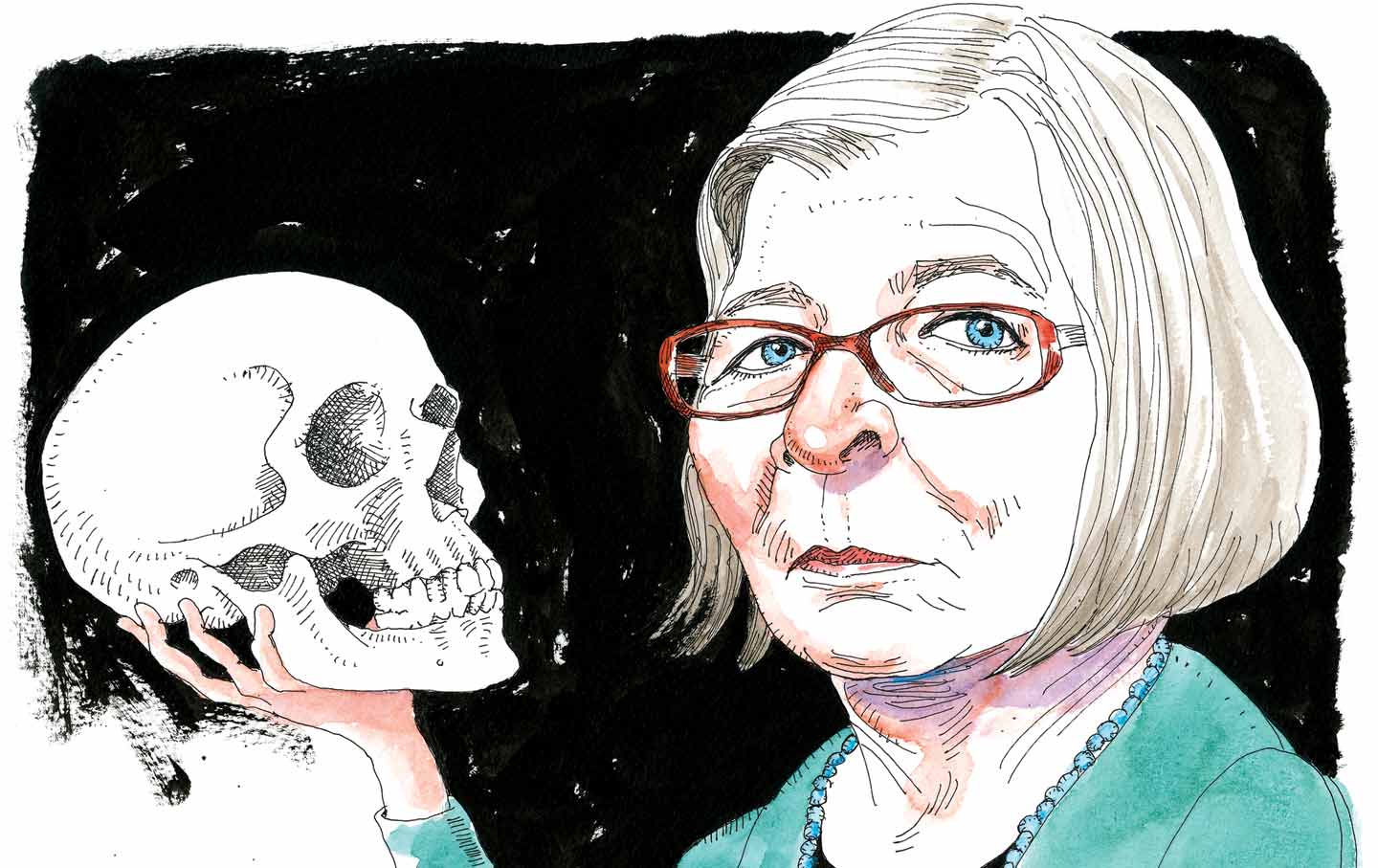 This premise proves to be fertile ground for Lipsyte’s masterful satirical style. The attempted idea-free ideology of mental archery, as the cipher at the novel’s center, is the black hole around which orbits the delightfully, manically maximalist prose, as well as the world of ever-multiplying anxieties it conveys. Hark’s performances before corporate audiences serve as vicious lampoonings of late capitalism, as do the inevitable absorption and redeployment of his mental archery by them for financial gain. With short chapters that shift abruptly in time and perspective, Hark barrels forward in what is less a plot’s steady progression than a series of digressive, accumulating riffs.

The form works, not least because it mirrors the activity of Hark himself, whose whole routine began as a comedy act performed at company retreats. The laughing stopped when Hark accidentally came to believe in his own bit. This was perhaps inevitable, given Lipsyte’s description of what gave the original act its humor: “He told jokes as though they were some alien and deathless gospel and grievous fates awaited those who paid no heed. This made his routines funnier.”

The same can be said of Lipsyte’s own reverence for the comic, which in his hands sits in close proximity to the profound. At his best, Lipsyte’s jokes can be side-splitting—but not every joke lands. There’s a reactionary throughline of clunky quips about the culture of political correctness that all fall flat: The owner of a strip club that Fraz visits describes the performances there as “post-cis neo-vaudeville burlesque”; when Fraz uses the word “stupid” in front of his son, he gets chided for using “hurt speech”; at an art museum, a legally required plaque encourages attendees not to appreciate an artist’s work without recalling “that he was distant with his family in later years and once considered having an affair with a neighbor.” Such gibes seem like idle wisecracking at best. At worst, they extend Hark’s satirical viciousness to undeserving targets, which neutralizes its political force.

The novel itself provides a framework for understanding why these jokes fail. In an early scene, Fraz, who has taken a part-time gig as a tutor, briefly debates a student on the subject of irony:

“Do you know what irony is?”

“Who told you that?”

For the most part, the novel bears out Fraz’s position. Irony arises from care; its eviscerations are ultimately reparative, if only in a preparatory way. But the novel’s lazier jokes seem more in line with the student’s bleaker assessment.

These missteps aside, the increasingly madcap absurdities of Hark—which include visitations from a talking catfish and a possible resurrection—are in service of a moral vision. The novel asks, in all earnestness: Where, in a world ravaged by capitalism, is redemption to be found? For Lipsyte, one answer is in language itself. Hark’s name, as he explains to Fraz, originated in an error. His mother, who was not a native English speaker, loved the carol “Hark! The Herald Angels Sing” and mistook the first word for a proper name. “That’s nice,” Fraz says. “It’s asinine,” Hark rejoins. But it’s neither. It’s redemptive; by chance, Hark is given a name that means “listen,” as in what someone might say before delivering some useful tips on focusing—or something much more radical. So he makes a life’s mission out of a mistake, the same way that he transforms a comedy routine into what eventually amounts to a religion.

Language, for Lipsyte, contains this kind of prophetic power, even and especially when vocabularies are degraded. Lipsyte’s trick, then, rather than attempt a retreat to some imagined, untarnished way of writing, is to shamelessly elevate the debauched to the level of the undeniably lyrical. But a danger lurks here, too. Language thus wielded can easily deceive and ensnare—as Hark does, however possibly pure his intentions. The subtlety of Lipsyte’s treatment lies in his sensitivity to the ways in which the noblest and the basest uses of language cannot be easily distinguished. Moreover, each can appear in the other’s guise. What’s needed, then, is not a guileless devotion to language, but rather a rigorous attentiveness to it. One might even say that what’s needed is focus.

Back in the bookstore where Fraz happened upon Hark, Lipsyte writes that the book he was seeking “would either explain with unerring exactitude the intractable shittiness of the political situation, or it would transport him to another place, a magical forest of shittinesslessness.” Hark does neither, but it does do something better: It sculpts the shittiness into something both transporting and exacting, if not unerring. Of course, this won’t save us. But it’s a start.