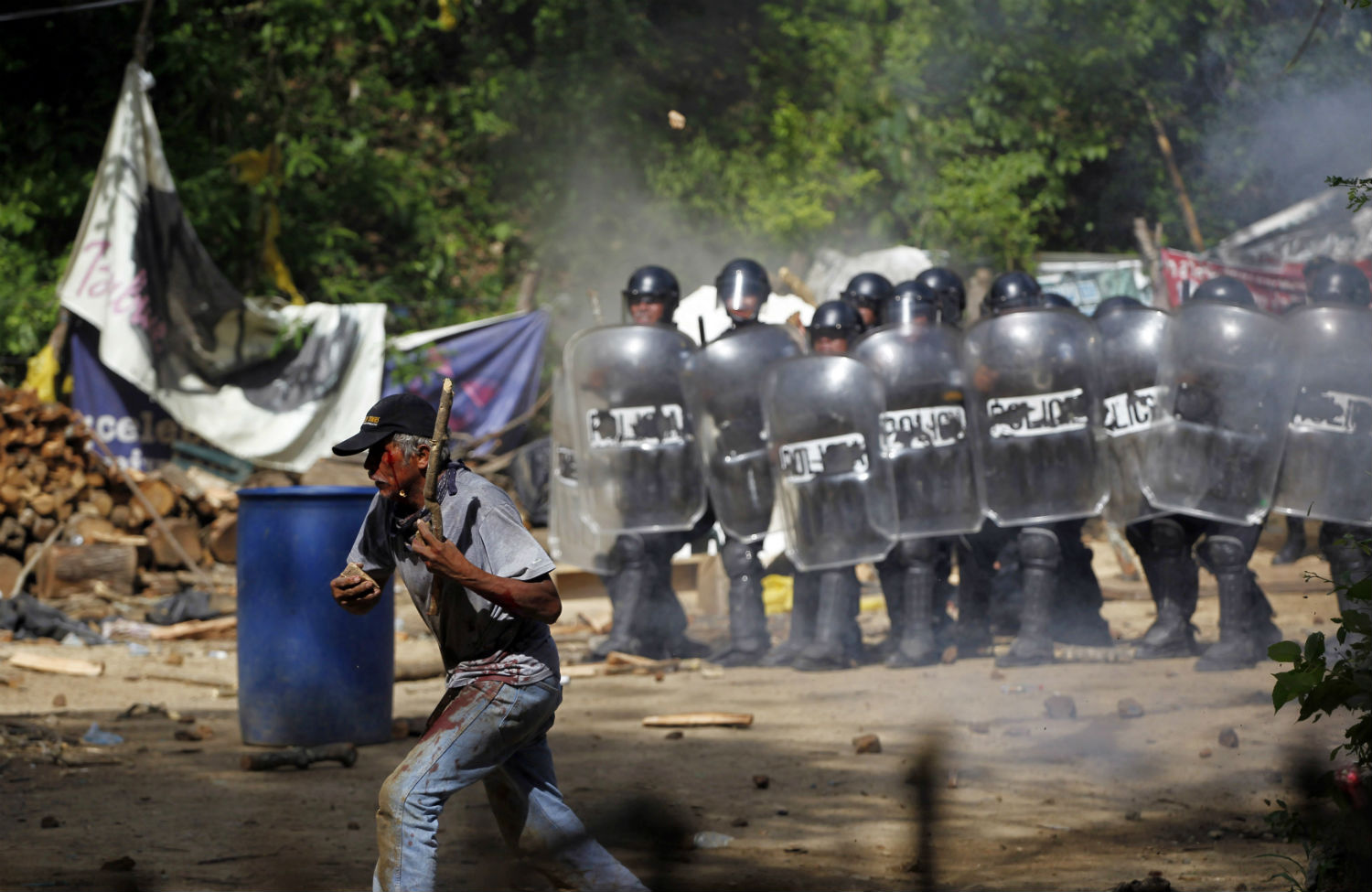 Protests at the Tambor mine in Guatemala in May, 2014 (Reuters/Jorge Dan Lopez)

The temperatures are rising and so is the body count. Every year, more and more environmental activists—many of them first peoples on the front lines of the new global resource extraction wars—are killed. In 2010, the number was 96. In 2011, 106. Last year, 116 people were murdered defending their farms, community, or livelihood in land, logging, dam, or mining disputes, according to a new report out just in time for Earth Day by Global Witness.

Two-thirds of the killings take place in Latin America, according to the report, How Many More? Brazil at 29 murders and Colombia with 25 are the highest in total numbers. But Honduras, with 12 assassinations, is the most dangerous place to be in the world for a grassroots environmentalist, in terms of per capita killings. Global Witness highlights Honduras as a case study in its report, and the chapter is well worth a read.

The 2009 Honduran coup (which was pushed by the neoconservative right in this country and eventually sanctioned by the Obama administration, with Hillary Clinton as secretary of state legitimating the putsch) was about many things, as Dana Frank and I wrote about at the time in The Nation: a reforming president, Manuel Zelaya, who apologized for the security forces’ social cleansing (that is, murder) of “delinquents”; who signaled his tolerance and support of LGBT activists; who began to make the morning-after pill legal; and who tried to raise the minimum wage.

But one of the main flashpoints of the conflict that led to Zelaya’s ouster was his efforts to regulate resource extraction, namely mining, hydro-electricity, logging, and biofuels. Central America, particularly Honduras, El Salvador, and Guatemala, is caught in a new cycle of rural dispossession, as sweeping as the twentieth-century heyday of coffee, cotton, banana, and sugar export. Under the Wild West terms of post–Cold War “free-trade” treaties, land that might be used for subsistence farming, or to grow crops for the local market, or kept as bio-diverse forest, is being ripped up and dug into. Water is poisoned or diverted. In the midst of neoliberal abundance—with Walmarts, or Walmart-owned megastores, sprouting up in every major city—children are dying of malnutrition, as land that used to provide basic staples is put to multinational profit.

People are fighting back. A friend, a longtime activist in Guatemala, reports that conflicts over mines and dams in the country’s Western Highlands, especially in the department of Huehuetenango, remind her of the mobilization that drove the country’s civil war of the 1970s and 1980s. In El Salvador, “the most water-stressed country in Central America,” the FMLN-led government has tried to issue a moratorium on mining, since mining companies pour toxic chemicals into drinking and farming water. (So far, Sandinista-governed Nicaragua has been spared fatalities, though plans to build a new, China-financed inter-oceanic canal is meeting resistance.)

And Zelaya, six years ago, tried to regulate rural resource extraction, allying with peasants and environmentalists (such as José Andrés Tamayo, a Catholic priest who in 2005 won the Goldman Prize for environmental activism for his work with rural communities to oppose commercial logging; this year, the prize went to another Honduran, Berta Cáceres, who helped the indigenous Lenca oppose a mega-dam). For that, among the other reasons cited above, Zelaya was felled in what New Yorker writer William Finnegan aptly called an “old-fashioned coup.” Today in El Salvador, the powers-that-be are opting for a more modern solution: mining interests are suing El Salvador for its mining ban in international trade courts, since under the terms of the Central American Free Trade Agreement, “corporations can sue governments if they perceive that government actions threaten their future profits.” Some will rob you with a six gun, others with a fountain pen (the Obama-pushed Trans Pacific Partnership would extend such corporate power over nearly the whole Pacific rim, making the trade treaty as destructive an instrument as bulldozers and guns).

That’s the context. Here’s Global Witness’s report on the current situation in Honduras:

Killings only reflect the most extreme manifestation of attacks on environmental and land defenders. In 2014 Honduran activists were subject to violent acts, stigmatization, intimidation and threats to their life. Powerful economic interests, often through the use of private security companies, are suspected as the main perpetrators of abuse. There are reportedly 5 times as many private security guards as police officers in Honduras and most security companies are owned by former high-ranking police or military officers. The Honduran police and army themselves have also committed human rights violations against activists. Criminalization of human rights defenders by the state is especially acute. The NGO COFADEH (The Committee of Relatives of the Detained-Disappeared in Honduras) has recorded 3,064 cases of the improper use of criminal law against defenders since 2010 [emphasis added]. This situation is particularly severe for environmental and land activists as the ex-UN Special Rapporteur on the situation of Human Rights Defenders Margaret Sekaggya remarks: “[Honduran] defenders who denounce environmental issues and educate citizens about their rights to land and food have been branded as members of the resistance, guerrillas, terrorists, political opponents or criminals.”

The Honduran government recently passed, in 2013, a new “general mining law” which removed a moratorium on new mining project. Since then, Global Witness points out, “4 activists have died due to their opposition to mining projects.” Since 2009, the fertile, lush Aguán Valley, home to small scale peasant communities, has become a war zone: 82 campesinos fighting agribusiness have been executed between 2010 and 2013.

During the Cold War, a large degree of political repression in Latin America was carried out by an alliance of rural landowners and death squads—an alliance that was nurtured, encouraged, and financed by Washington. In this new cycle of accumulation and dispossession that alliance has, in a way, been resurrected and updated: the “landlords” now are much more directly integrated into multinational resource extracting corporations. The “death squads” are now above board, legal private security firms (many of them staffed with former Colombian paramilitaries) hired to “protect” private property. Global Witness:

Although information on the perpetrators of violence against defenders is hard to verify, in many cases private security companies used by mining, hydropower and agribusiness have been suspected of involvement. Private security guards were implicated in 13 of 29 killings of campesinos in Bajo Aguán investigated by Human Rights Watch between 2009 and 2013, for example. Similarly, the 2013 visit to Honduras by the UN Working Group on the use of mercenaries voiced concern about the alleged involvement of private security companies hired by landowners in serious human rights violations, including killings, disappearances, forced evictions and sexual violence.

And instead of being funded directly by Washington, the alliance is capitalized by multinational “development” institutions. Again, here’s Global Witness: “The World Bank’s private lending arm, the International Finance Corporation (IFC), loaned US$30 million to Dinant, a palm oil company tainted by assassinations and forced evictions of farmers in Bajo Aguán and owned by one of Honduras’s richest and most powerful businessmen [and 2009 coup plotter], Miguel Facussé.” (In 2009, Teo Ballvé in The Nation reported on USAID funds used to finance biofuel plantations on land stolen by paramilitaries).

To keep track of the blood spilled in this new phase of intensified dispossession and resource extraction, along with all of Latin America’s diverse food sovereignty, anti-GMO, and environmental activists fighting for a dignified life, these websites and organizations are indispensable: Upside Down World, the Americas Program of the Center for International Policy, Rights Action, NACLA, CISPES, the Network in Solidarity with the People of Guatemala, and La Via Campesina.