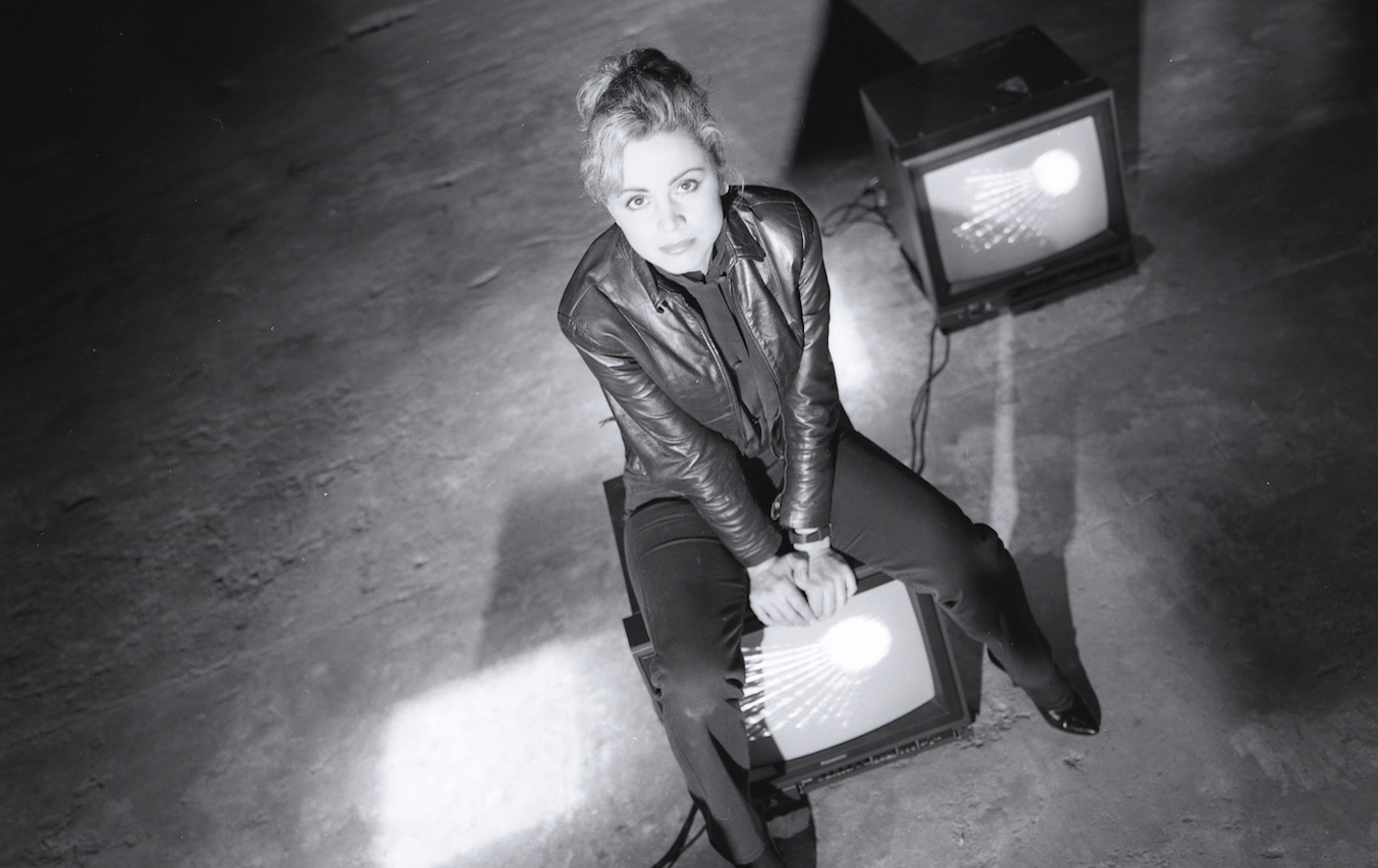 When the artist Gretchen Bender was born in 1951, there were only four television networks in the United States. All of them stopped broadcasting by midnight, filling sets across the country with dead air and static. When she died in 2004, Americans had access to hundreds of channels, most running 24 hours a day. Her art, showcased in her first posthumous retrospective, “Gretchen Bender: So Much Deathless,” registers the shock waves of this transformation and does so with a healthy dose of skepticism. Her multichannel installations from the 1980s and ’90s, the focus of the exhibition, feature rows and stacks of bright and raucous TV monitors. Unapologetic migraine inducers, they cycle live and recorded footage in often jarring sequences. TV for Bender is hostile and unrelenting, impossible to escape or ignore—not an accessible well of information or entertainment, but a portal leading to states of heightened confusion and exhaustion.

Bender was raised in Delaware and studied art at the University of North Carolina at Chapel Hill before moving to Washington, DC, where she led the Marxist-feminist silkscreen collective P Street Paperworks. She took her politics to New York City, where she relocated in 1978, and there quickly fell in with the Pictures Generation crowd, a group of artists (primarily photographers) who cut up, repurposed, or replicated mass advertising to create their own anti-consumerist, anti-sexist slogans and images. She exhibited in the same downtown galleries and venues as Cindy Sherman and Robert Longo, her long-term boyfriend and collaborator; despite this pedigree, Bender never achieved widespread commercial success or fame, in part because of her untimely death from cancer at the age of 53. “So Much Deathless”—named for a large-scale video work left unrealized when she died—is the second recent exhibition that attempts to correct her work’s relative neglect (after a smaller reappraisal of her art in 2013 at the Kitchen). Curated by Max Wolf with Kenta Murakami for Red Bull Arts New York, the show argues that Bender’s output is too smart to continue ignoring and rightly reclaims her as one of the sharpest critics of TV’s first golden age.

Like the Pictures artists and many others of the postwar boom, Bender was interested in the influence of commercialism and mass media on everyday life and aesthetics. The oldest series included in the exhibition, “The Pleasure Is Back” (1982), draws on her printmaking training and borrows from the Pictures cohort’s techniques of pictorial remixing, harnessing corporate imagery to showcase its limitless and polluting reach. The suite of silkscreens on enamel meld print advertisements for Dial soap, Chanel clothing, and Aramis cologne with reproductions of work by Sol LeWitt, A.R. Penck, and Isamu Noguchi, suggesting that even the most pristine and masculinist high-art abstractions are not safe from the corrosive influence of the market.

By the mid-’80s, these early and art-world-centric experiments in appropriation gave way to broader and more original critiques, as Bender began using video to emulate the 20th century’s primary medium of commercial imagery rather than just its messages. In an interview with Sherman in a 1987 issue of Bomb, Bender described the shift from print as “a natural evolution…. It seemed obvious to me that the next area was television which is an incredible goldmine for the flow of the pulse, the permutations that happen daily, in the culture.” Bender did more than lift images from TV; she sought to create something like her own extreme version of it, one whose dialed-up intensity might warn viewers about the format’s capacity as a vehicle for corporate manipulation and control. And her later works are less exercises in appropriation than attempts at simulation, as the critic Ben Davis recently observed in Artnet.

An early stab at two-channel video shown in the exhibition, Wild Dead I, II, III (Danceteria Version), was produced in 1984, the same year AT&T was forced to start divesting its holdings after an antitrust lawsuit begun in the 1970s, and includes splices from David Cronenberg’s Videodrome (1983) with images of AT&T’s new Earth-shaped logo. In Cronenberg’s dystopian horror, TV viewers are unwittingly brainwashed by their sets, consuming seemingly banal broadcasts that later induce violent hallucinations and desires. Bender’s mashup presents Cronenberg’s fiction as reality, as scenes from the film are punctuated by menacing flashes of the AT&T globe—an indication of the company’s vast ambition and a symbol Bender derided as the “Death Star.” The ensemble, set to a frenetic, pulsating score by postpunk musicians Michael Diekmann and Stuart Argabright, comments on the outsize power of telecommunications companies over the American public—a power that is arguably greater today, in light of antitrust’s unraveling in the ’90s and new forms of Web monopoly.

TV’s dark and manipulative possibilities are best conveyed in Total Recall (1987), a massive 11-channel masterpiece of “electronic theater,” as Bender described it, consisting of 24 monitors on a multistage platform with three projection screens above and flanking it. Total Recall moves to another Argabright score, showing clips of a few seconds surging and splintering across the work’s many surfaces. The images are too varied and fast-moving to possibly identify in one sitting, though recurring motifs include advertisements for General Electric, a maker of home appliances and military-grade weapons, and scenes from Oliver Stone’s Hollywood take on the Salvadoran civil war, Salvador—a pairing that hints at the violence of seemingly benign entertainment and the complicity of commercial TV in militarism. In its pace and content, the piece highlights TV’s subliminal capabilities and forces us to question whether we are truly able to recognize and critically comprehend the pictures and sounds that flicker by us on a daily basis. Like Paul Verhoeven’s blockbuster about memory implantation from which the piece takes its name, Total Recall proposes that the human mind is vulnerably, dangerously impressionable.

As is evident in works like Total Recall and Wild Dead, Bender saw past the fiction that the expanded consumer choice and 24/7 availability of cable would leave Americans more empowered or better informed. Her compositions induce deliberate screen fatigue, demonstrating how readily we absorb mass communications, how the rapid churn of scripted shows, newsreels, and commercials on TV blurs entertainment and information, fiction and truth. 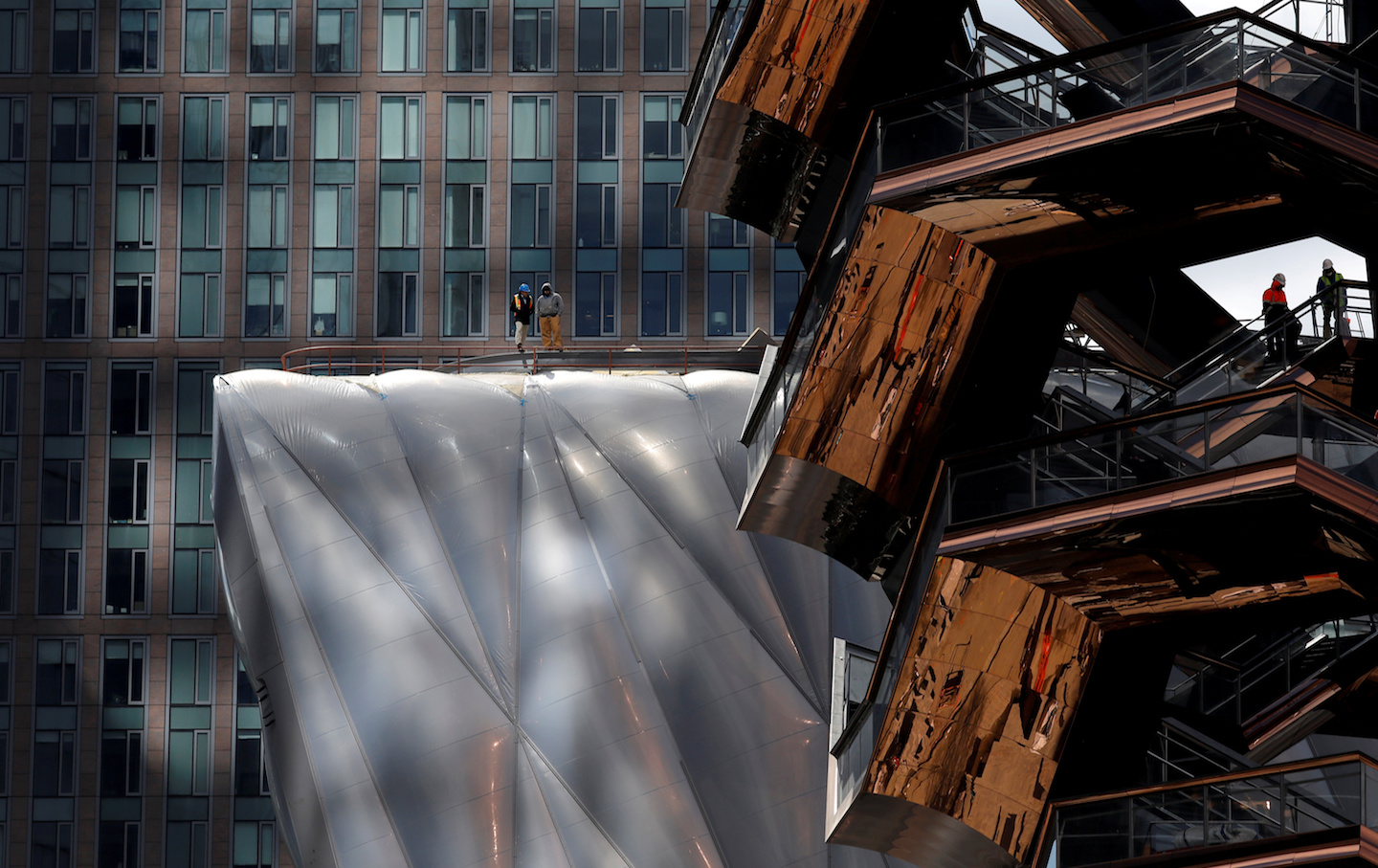 It is this largely cynical take on TV’s segmentation and rapidity that explains the renewed interest in her work today, as the Internet proves itself more and more adept at sowing disinformation and discontent. And the curators of “So Much Deathless” impute to Bender’s work a visionary quality—reading in it a prediction of contemporary screen anxiety and malaise, as well as an anticipation of the deluge of images and data in today’s Web-saturated world. Her art, they suggest, is worth resuscitating not only for what it can say about TV but also, more important, for what it might caution about new media. As they write in the show’s booklet, she “responded to her historical moment by getting decades ahead of it.” The photograph selected for the show’s press release, taken by Hans Neleman, hits this point home: A young Bender appears before a black backdrop, her body partly obscured behind glittering jets of blue light evoking screen glow—a postmodern techno-prophet, gazing knowingly back at us.

As with many contemporary shows of older multimedia work, the curators of “So Much Deathless” cannot avoid succumbing to the temptation of finding a hint of prescience in the art, wishing to see the seedlings of the Internet in art from decades past. Bender, more so than others, is a convincing candidate for such a reading, given her emphasis on media speed and acceleration. But for this very reason, I imagine that it is a reading she would have been dissatisfied with.

In the Bomb interview with Sherman, Bender spoke of the situated, immediate nature of her material and her belief that good art had to be constantly evolving, lest it become stale or “neutralized.” That Bender’s work remains so compelling and unneutralized suggests that we are too quick to assume that we have moved past the challenge of TV, itself a large part of Web content, to face the greater challenge of Internet culture. Perhaps it is not that Bender predicted the future but rather that we are still learning to live with the past—not yet able to cope with the Pandora’s box of TV unleashed in Bender’s sets and presumptuous to think we are prepared to face an even greater demon.