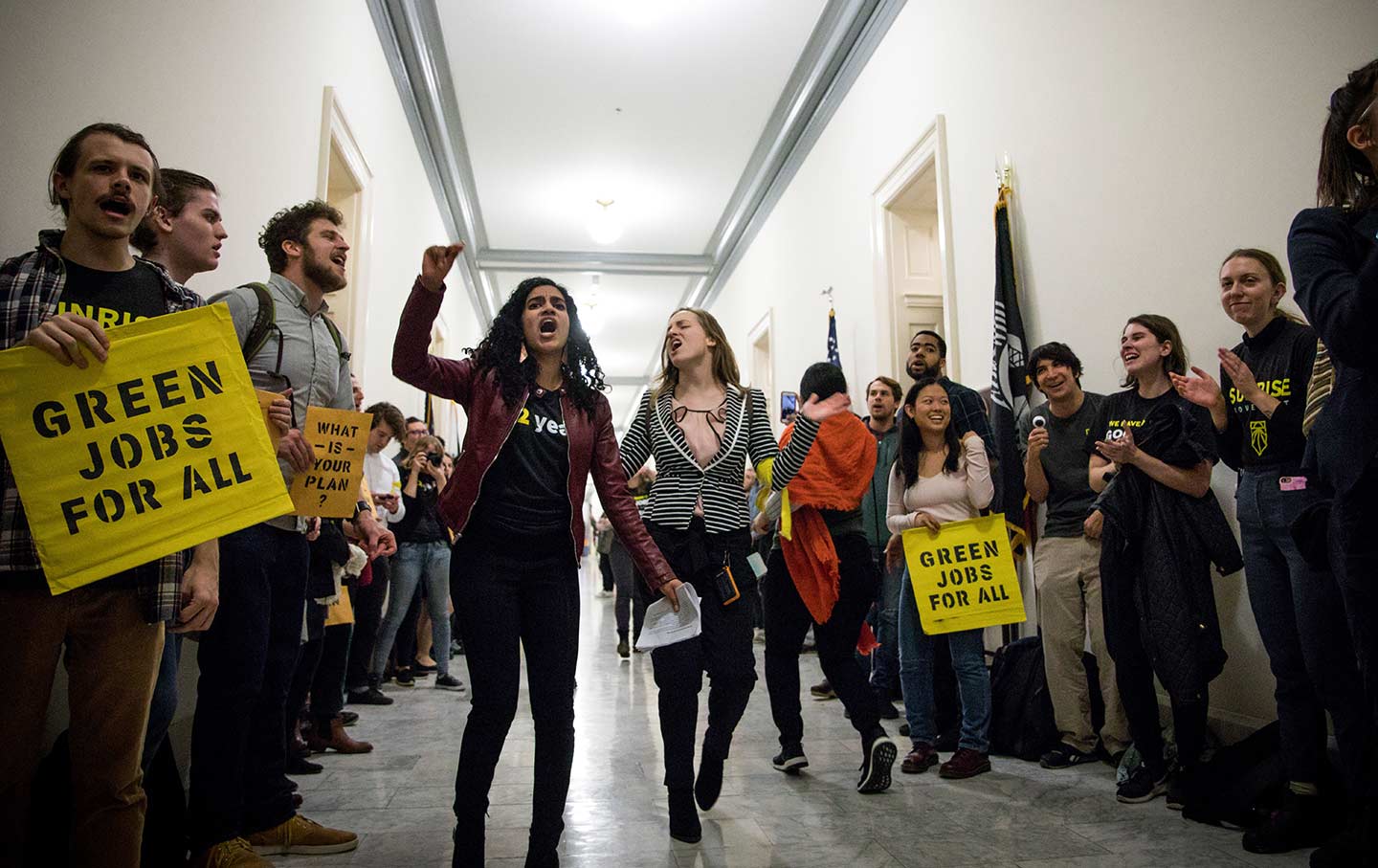 Activists with the Sunrise Movement—including Executive Director Varshini Prakash—occupy Nancy Pelosi’s office to demand that she and the Democrats act on climate change. (Rachael Warriner / Shutterstock)

What is it about the left and the space program? Back in the summer of ’69—long before he became The Nation’s lead editorial writer—the late Andrew Kopkind pointed out the inextricable ties between American militarism on earth and our country’s higher aspirations.

“We Aim at the Stars (But Hit Quang Tri),” he wrote, decrying a system “that swells the profits of the biggest military/space corporations without changing the system of distribution of those profits one whit.” Critics might say we’re still at it, still harshing the national buzz by noticing those on whose backs that giant leap was launched—just as we did at the time, when The Nation impertinently remarked that amid all the talk about “the blackness of space,” the faces on the screen were uniformly white.

So perhaps this is an odd place to confess my lifelong love affair with space. On that July Sunday, I’d just returned exhausted from a Boy Scout camping trip yet somehow prevailed upon my parents to wake me up in time to watch Neil Armstrong going down that ladder. It was thrilling then and, despite all we’ve learned—and published—still sends a chill down my spine. As did the realization, some 30 years ago, that the auto mechanic I was interviewing in Harlem was the father of Ronald McNair, the African American astronaut who died in the 1986 Challenger disaster.

Which doesn’t mean those who pointed out the irony—and political misdirection—permeating that ‘69 landing in the Sea of Tranquility while cities burned back home (and were being bombed to cinders in Vietnam) were wrong.

Unions Are Finally Learning to Love the Green New Deal

It has always been a question of priorities. The Cold War—and the blow to America’s collective ego struck by Sputnik—made the space race into a well-funded national obsession. Yet even those most critical of recent attempts to revive that apocalyptic antagonism might cheer a renewed rivalry aimed not at conquering new worlds but at saving this one. Why not make the Green New Deal this generation’s moon shot? Why not invite Russia—and China and India—to join us in a race to save Spaceship Earth?

NASA once estimated it took over 400,000 scientists and technicians to land human beings on the moon. That’s a huge backup team—and if applied to the basic research, applied science, and engineering that would be required to end America’s fossil fuel addiction, could also be a course correction for our economy in ways that might satisfy even NASA’s longtime critics. Like Eisenhower’s National Defense Education Act, the massive investment required to educate and train such a workforce would have consequences far beyond the Green New Deal. Likewise the millions of jobs involved in building energy-efficient public housing, a 21st century rail network, and all the other components of a truly comprehensive response to climate change. Only instead of ignoring or exacerbating racial and economic inequality, the Green New Deal would directly address those problems. (That’s the “New Deal” part.)

It’s not a new idea. In 2003 the Apollo Alliance tried to bring labor and environmental groups together around a $300 billion 10-year program to speed up the transition to clean energy. Five years later, in these pages, Van Jones argued for a green capitalism that would unite environmentalists, social justice activists, and organized labor. Yet neither was nearly ambitious enough. The Apollo lunar program cost $288 billion in today’s dollars.

The Green New Deal won’t be easy to pass—or to deliver. As President Kennedy said, “We choose to go to the moon in this decade and do the other things not because they are easy but because they are hard.” Building the postcarbon economy we desperately need while unraveling the noose of inequality around our necks will be a gigantic undertaking. That’s the good news. The bad news is that unlike going to the moon, saving the earth isn’t an option. It’s a necessity.