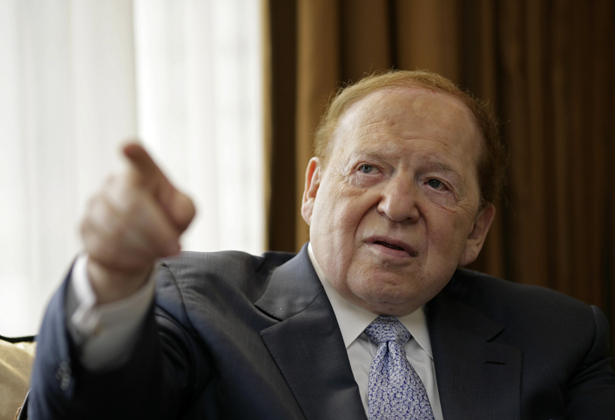 Nearly one-third of anti-Iran pressure group United Against Nuclear Iran’s 2013 budget came from the country’s foremost Republican megadonor, a man who invested a reported $98 million to defeat Barack Obama in the 2012 election, casino magnate Sheldon Adelson. Adelson routed his $500,000 donation to UANI through his family foundation, according to tax documents.

Over the past six months, a number of unanswered questions have swirled around UANI. The Justice Department continues to shield information about the group’s internal workings from coming to light; the group hasn’t accounted for a mysterious funder who stands to profit from a confrontation with Iran; and UANI’s own president is out of sync with the group’s hardline positions.

But now we have some partial answers as to who supports the group’s vociferous opposition to negotiations with Iran, de facto advocacy for blockades on food and medicine to the Islamic Republic, and characterizations of the White House’s November 2013, interim agreement with Iran as a “disappointment” that “[provides] disproportionate sanctions relief to Iran.”

Adelson and UANI’s public positions don’t always match up but hostility for Iran and doubts about the efficacy of diplomacy are shared between the organization and its funder. UANI, despite issuing vocal oppositions to the White House’s negotiations with Iran, has avoided calls for military action; Adelson is far more outspoken.

Adelson, as reported by Connie Bruck in a June 2008 issue of The New Yorker, commented, “I really don’t care what happens to Iran. I am for Israel.” That message stands in sharp contrast to UANI’s claims of supporting human rights in Iran and seeking a diplomatic resolution to the dispute over Iran’s nuclear program.

The Las Vegas Sands CEO also told an audience at Yeshiva University in October 2013 that Obama should launch a pre-emptive nuclear attack on a swath of uninhabited Iranian desert (the first use of a nuclear weapon against another country since the nuclear bombings of Nagasaki and Hiroshima) and threaten that Iran will be “wiped out” if the country’s leadership doesn’t dismantle their nuclear program.

So how does UANI—a group which denounces Iran’s “incitement to genocide” for its threatening comments toward Israel—respond to their own funder’s calls for the nuking of Tehran, a city of 7.8 million people?

The organization’s leadership did not respond to requests for comment.

Adelson’s position as the GOP’s top donor in the past presidential election cycle may put him above criticism in many circles. But his support has come at a political price for groups enjoying his largesse.

Even the Foundation for Defense of Democracies, a hawkish think tank that received $1.5 million from Adelson and whose “Iran experts” have pushed for aggressive measures—including pre-emptive military strikes against Iran, found itself in an awkward situation when confronted by NPR’s Andy Carvin with Adelson’s proposal for pre-emptively attacking Iran with nuclear weapons at an October 2013 Capitol Hill forum.

FDD’s Mark Dubowitz, perhaps fearful of offending his billionaire donor, deflected the question and Reuel Marc Gerecht—who has advocated for attacking Iran so many times that, according to him, “even my mom thinks I’ve gone too far”—responded only that deploying a nuclear weapon against Iran “wouldn’t be my first suggestion.”

Indeed, both UANI and FDD have fallen short of publicly endorsing Adelson’s proposal for escalating, preemptive nuclear attacks on Iran.

But Bruck’s 2008 article hinted that a group or individual’s position on taking military action against Iran has guided Adelson’s philanthropic decisions at least once in the past. Bruck wrote that Adelson declined to lend his support to one Iranian anti-regime activist because, in the words of an interlocutor, “he doesn’t want to attack Iran.”