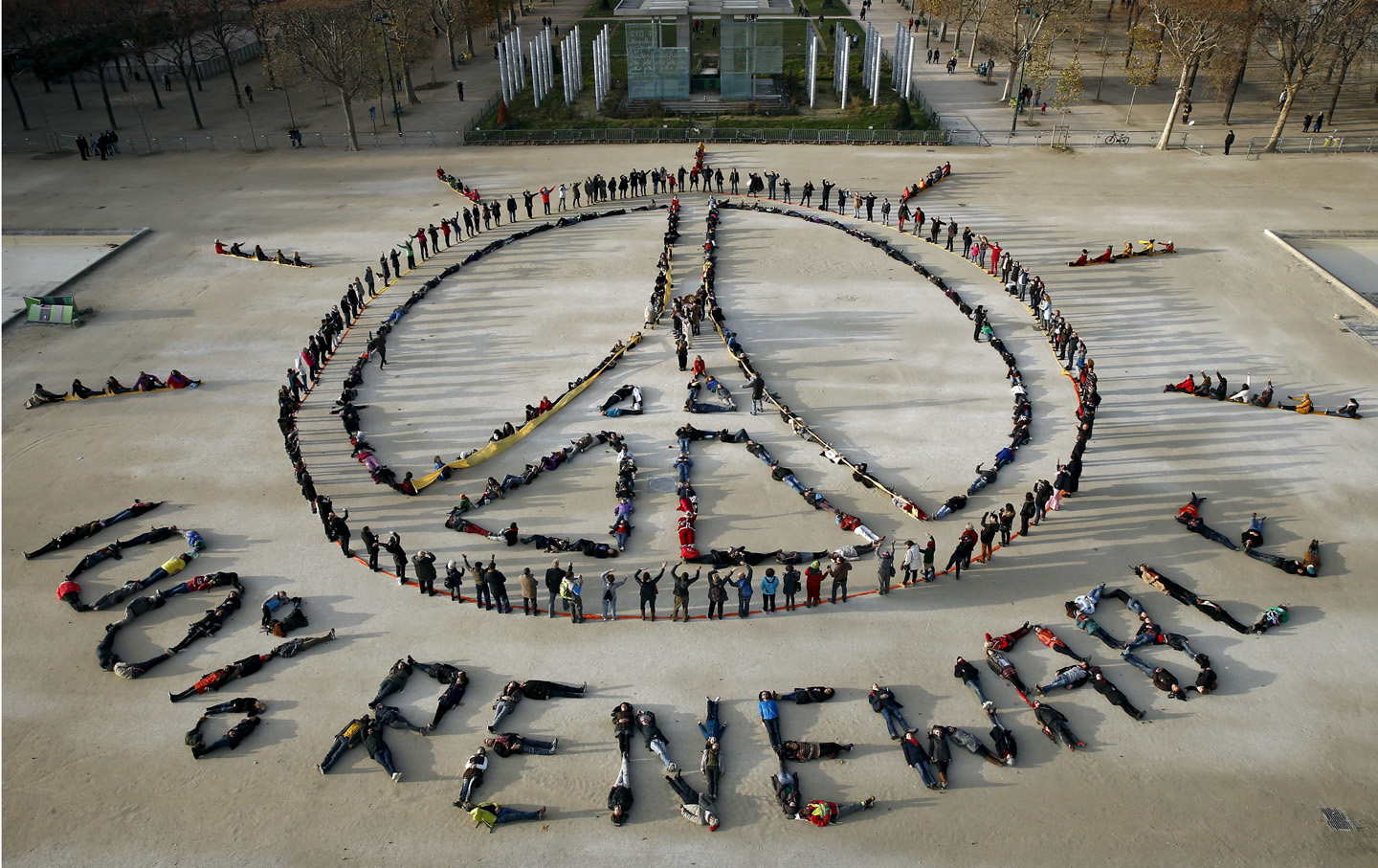 Hundreds of environmentalists arrange their bodies to form a message of hope and peace in Paris, France, as the World Climate Change Conference 2015 (COP21) continues near the French capital. (Reuters / Benoit Tessier)

With a nod to Dickens, are these the best of times or the worst of times in the battle to prevent climate chaos? There’s plenty of evidence both ways, starting with the potential game changer that humanity’s greenhouse-gas emissions may have peaked, at least in the all-important energy sector. And who can doubt that revolutionary changes are afoot when even Saudi Arabia declares that it will wean its economy from oil over the next 20 years? The kingdom is establishing a $2 trillion sovereign-investment fund, much of which seems destined to finance solar energy. Meanwhile, however, global temperatures are increasing at record speed, threatening a gargantuan sea-level rise within the lifetimes of children born today and causing normally reticent scientists to employ words like “alarming,” “emergency,” and even “insane.”

Welcome to the post-Paris era of climate change. Now, everything depends on how quickly activists, investors, and the rest of global civil society can turn the lofty rhetoric of last December’s Paris Agreement into concrete actions that will, as the activists demand regarding fossil fuels, “Keep It in the Ground.” Governments pledged in Paris to limit the global-temperature rise to “well below 2 degrees” Celsius and to “pursue” a target of 1.5°C—an astonishing diplomatic breakthrough that heartened the representatives of low-lying and other particularly vulnerable countries. But the “national plans” submitted for cutting emissions fell far short of these goals. Thus, the challenge now is to push governments to bring their actual policies—in energy, agriculture, forestry, and more—into line with the Paris Agreement’s temperature limits.

“We will give our blood and our lives—but not the Sundarbans.”

This will provoke titanic political struggles, as it requires choosing not to burn most of the planet’s remaining oil, coal, and natural gas. Such a choice amounts to heresy for many entrenched interests—the Koch brothers and ExxonMobils of the world, but also oil workers in Louisiana and coal miners in China. But other economic interests—centered around solar, wind, energy efficiency, and other climate-friendly technologies—are challenging the status quo, and they too have money and popular support. The question now is whether these ascendant clean-energy interests will prevail over their fossil-fuel rivals—and prevail soon enough to avert climate catastrophe. The news from Saudi Arabia gives cause for hope.

Civil-society pressure has already moved “Keep It in the Ground” from the margins of mainstream discourse to the contested center. And global elites are responding, though there’s still a long way to go. The Obama administration has announced a three-year moratorium on new coal mining on public lands and a five-year ban on oil drilling off the Atlantic coast. Activists are now pushing the administration to rule out drilling in the Arctic and Gulf of Mexico as well. “We’ve come so far,” Anna Aurilio, director of the Washington office of the NGO Environment America, told The Nation. “The president has gone from ‘all of the above’ to ‘keep some of it in the ground.’ Now we have to convince him to keep all of it in the ground.”

One hugely encouraging tipping point may already be behind us. The International Energy Agency (IEA) calculated that global emissions from the energy and transport sectors peaked in 2014 and 2015, even as economic growth continued. Mainstream and progressive US media alike missed the implications of this news: In effect, it means that the 1.5°C target is still within reach.

An all-star panel of climate scientists at the Paris summit said that total global emissions had to peak by 2020 to keep the temperature rise to 1.5°C. Thus, if the current emissions peak is validated by further data—and followed by rapid, continuing reductions—a 1.5°C rise might still be achieved, which could prevent millions of deaths and related suffering in vulnerable communities the world over. There are caveats: Official data from China may prove unreliable, and the IEA may have overlooked the sizable boost in methane emissions associated with fracking, as Bill McKibben recently argued [see “Global Warming’s Terrifying New Chemistry,” April 11/18]. Still, the overall trend seems positive.

More good news: This apparent emissions peak was led by the world’s two climate superpowers, suggesting that other nations will follow suit. The United States and China both appear to have reached a peak in energy-related emissions in recent years, largely by scaling back coal in favor of renewable energy. (Again, the mainstream media missed the significance of this development; some even wondered whether it was entirely positive. After all, if China was already peaking in 2015, wasn’t the 2030 target it had promised in Paris misleading—giving Beijing a license to keep polluting, and gain a competitive advantage, for 15 years longer than it should?)

Now the bad news: The latest temperature data indicate that we may already have hit the 1.5°C limit. The data are provisional, and El Niño is partly to blame. But it is undeniable that 2016 has already witnessed the hottest January and February on record—and February registered the single-largest temperature increase in history, thereby nudging the global temperature slightly above 1.5°C. That will decline later this year as El Niño wanes, which in theory leaves the 1.5°C goal still attainable. Nevertheless, the challenge is steep. “This is the true climate emergency: It is getting more difficult with each passing year for humanity to prevent temperatures from rising above 2°C,” warned two climate scientists, Steve Sherwood of Australia and Stefan Rahmstorf of Germany.

The momentum of Earth’s climate system means that at least 10 feet of eventual sea-level rise are already locked in. The big question now is how soon this occurs—over centuries, which could be manageable, or over decades, which would be catastrophic. New studies have warned that sea levels could rise six to nine feet by 2100—or even sooner, according to retired NASA climate scientist James Hansen. This would inundate hundreds of coastal communities throughout the world, including New York City, Miami, and Washington, DC, as well as London, Hamburg, Lagos, Tokyo, Hong Kong, and Shanghai. In theory, protective barriers could be erected, and wealthier locations will surely attempt this. But it will be financially impossible to protect all of the endangered areas—which is one more reason to accelerate emission reductions, as well as to prioritize efforts to extract carbon dioxide from the atmosphere by shifting to cover crops, biochar, and other organic methods in agriculture and forestry.

A final encouraging note: These mega-trends are unfolding as the global climate-justice movement is increasingly mobilized, winning local and international battles and launching a new round of militant activism. This spring, a series of worldwide actions called “Break Free” is focusing on specific fossil-fuel infrastructure projects that must be stopped to honor the Paris temperature goals.

One action in particular symbolizes what’s at stake. Bangladesh, with its low-lying topography, vulnerability to cyclones, and pervasive poverty, is perhaps the most climate-threatened major nation on Earth. But Bangladesh boasts an active civil society that is increasingly focused on the climate challenge. Recently, NGOs organized thousands of people to march over 100 miles, from the capital, Dhaka, to the Sundarbans tidal forest on the coast, a UNESCO World Heritage Site whose mangroves provide crucial protection against cyclones. The marchers were protesting an absurd relic of 20th-century thinking: plans to build two giant coal plants, which would not only make climate change worse but would occupy land certain to be flooded by the rising seas.

“We will give our blood and our lives,” chanted the Bangladeshi marchers, “but not the Sundarbans”—a motto for all of us in the post-Paris era.