Late on Wednesday night, the suspense ended. We learned that MSNBC will renew Lawrence O’Donnell’s contract, which was due to expire this Sunday. At least for now, the network’s increasingly conservative tilt—new show hosts include Greta Van Susteren, Nicolle Wallace, Hugh Hewitt, and, on sister network NBC, Megyn Kelly—will not be bleeding into the primetime liberal line-up of Chris Hayes, Rachel Maddow, and O’Donnell. At the end of Wednesday’s The Last Word, O’Donnell congratulated an intern starting a new job next week and added, “You know where I’ll be next week? I will be sitting right here talking about the James Comey hearing and everything else that happens next week and everything that happens for the next couple of years.” Later he confirmed by tweet that he won’t get bumped from his 10 pm perch: “Yes I will be saying hi to Rachel @maddow at 10 pm for the foreseeable future.”

Earlier that day, when the outcome of his negotiations with MSNBC over his contract was still in doubt, a small group of O’Donnell fans staged a rally at Rockefeller Center in his support. Fenced off on a slice of 49th St. across from NBC News, they carried signs like “Keep Lawrence, Dump Trump” and “america needs lawrence o’donnell calling out trump lies nightly at 10 pm.” One sign implied that if his contract weren’t re-upped, MSNBC, NBC, and their parent company Comcast would face boycotts.

The small rally (with just 10 people at its peak) and one a week earlier at the same spot were organized by Annie Salas, an entertainment-TV producer. The participants drew questions from passersby, some friendly kibitzing from NYC cops who joked that they should get more rowdy, and attention from a Canadian couple who seemed confused as to what the protest was all about. “We like Trump,” the woman told Annie, who patiently tried to explain the pros of having a free press and the cons of having autocrats. 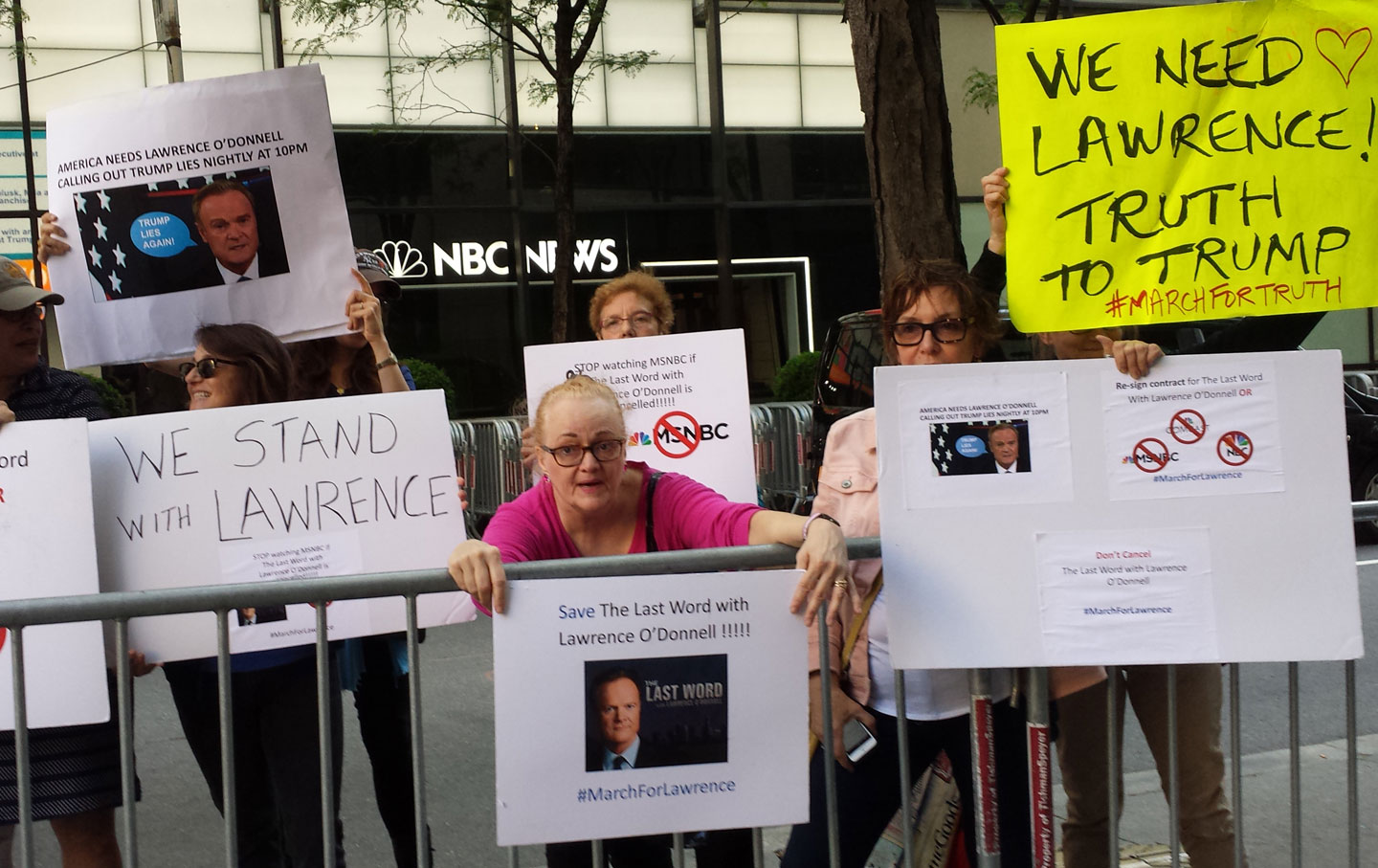 After the news of O’Donnell’s contract renewal, Salas told me she didn’t believe that Comcast “was swayed by a loyal fan base.” But maybe MSNBC was: “It’s been MSNBC and [NBC News and MSNBC chairman] Andrew Lack that were on the front line,” she said. “If ad revenues started to diminish in that block, they’d have their names attached to it. We’re living in a time when everything reflects what side you are on, and the decision you make will be the legacy you live with.”

The rallies, together with a much larger social-media effort—including the hashtags #TheLastWord and #MarchforLawrence—did at least garner the attention of some NBC brass. Salas says a senior vice president of communications for NBC Universal sent her “a very upbeat e-mail,” asking to speak with her by phone. (On the advice of a friend who works in PR—who said there was “nothing on your end to gain from it”—she didn’t call back.)

Though O’Donnell will remain at MSNBC, it’d be a mistake to think that protesters were overreacting. MSNBC, long considered the liberal answer to Fox News, is doling out valuable TV time to any conservative Never Trumper or ex-Foxer who bats an eyelash at them. The former Fox anchor Van Susteren has been hosting an hour-long weekday show at 6 pm since September. Wallace, a former communications director for George W. Bush and a top adviser for the McCain/Palin ticket (which she famously didn’t vote for) took over the 4 pm slot from Steve Kornaki just a few weeks ago. Right-wing radio host Hugh Hewitt—who never-Trumped for a nanosecond—will reportedly get his own show on Saturday mornings. And to top it off, climate-change denier George Will, recently booted from Fox News for opposing Trump, has signed on as a contributor to MSNBC and NBC, where former Fox News star Megyn Kelly will debut her Sunday night show this weekend. In September, Kelly will also take over the third hour of NBC’s Today show.

O’Donnell supporters aren’t crazy to believe that MSNBC could be as ruthless as the next corporate media outlet. Just the day before O’Donnell announced his good news, we learned that CBS had fired Scott Pelley as the anchor of its nightly news show. Pelley has been outspoken about Trump—saying stuff like “It has been a busy day for presidential statements divorced from reality”—something unheard of for a network-news anchor. (Pelley will remain with CBS, however, returning full-time to 60 Minutes.)

MSNBC, of course, has its own history of unceremoniously shedding talent. In February, Tamron Hall quit both NBC and MSNBC after being told—just minutes before going live on air for her daily MSNBC news show—that Megyn Kelly would be bumping her from Today. That followed the purges of 2015, when Andrew Lack, the MSNBC executive, let go of, or moved to obscurity, some of the channel’s more progressive daytime voices—Ronan Farrow, Alex Wagner, Al Sharpton, and Ed Schultz—in an effort to make MSNBC look more like NBC and its straight-news approach. In early 2016, Melissa Harris-Perry quit her weekend show over disputes about editorial control. “They wanted us to cover politics in the narrowest sense,” Harris-Perry said at the time.

But even if Lack lusted for a more centrist prime time, it may not have made business sense to ax O’Donnell, as a number of the protesters pointed out to me. During the month of May, MSNBC earned its highest prime-time ratings ever, topping CNN and Fox in the desirable demographic of 25- to 54-year-olds for the first time in 17 years. And in terms of total viewers among MSNBC shows, also for the month of May, O’Donnell has had ratings second only to Maddow. Like CNN and Fox, MSNBC has Trump to thank for the ratings boost, but it has improved over the last year at far higher percentages than its rivals.

We don’t know what concessions either side may have made, but for now MSNBC issued a statement that portrays O’Donnell as just one of the five amigos: “Each weeknight, Chris Matthews, Chris Hayes, Rachel Maddow, Lawrence O’Donnell, and Brian Williams provide insight and perspective that lets you know you’re in the know.”

But in truth, many viewers consider only some of those hosts to be the last bastion of progressive TV news. “Lawrence O’Donnell and Rachel Maddow are essential to what’s left of my sanity,” Beverly Bullock told me at the rally. “A true, honest, crusading press is needed more than ever. The press is the only sector that’s really standing up for our country.”

And as much as anyone may or may not love O’Donnell, for some, the anxiety is not really about him. Claire Dillingham, a semi-retired teacher who attended the rally, said, “This is what I’m scared of—not of this or that individual losing a job so much as the whole attempt to tell the press to ‘Shut your mouth.’”