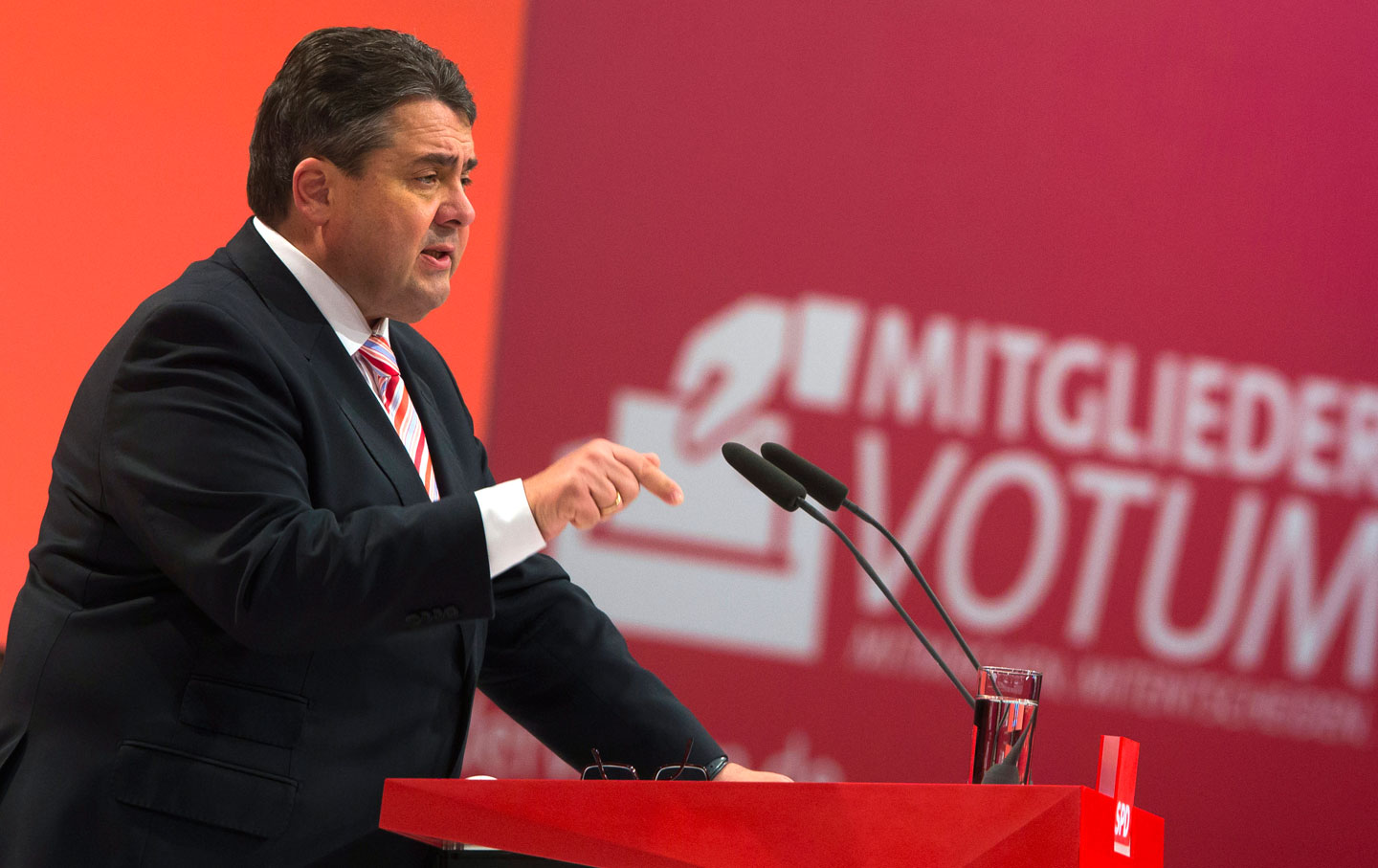 I’ve been a member of the SPD since the age of 13. As you’ll know, that is not supposed to happen: You have to be 14 to sign up. But I was so impatient for Helmut Kohl’s conservative government to come to an end, and admired the history of social democracy so much, that I begged the comrades in Munich until they said: “You could always make a little mistake and write that you were born in 1981 rather than in 1982.”

Since then I’ve often had my disagreements with the SPD. But I never regretted being a member. Until now.

After a long process of alienation from the party, the last days and weeks have made me lose all hope that the party, in its current shape and with its current leadership, is going to stand up for the grand traditions of social democracy.

The SPD has no plan for how to make a comprehensive welfare state sustainable for the future.

The SPD is lacking a true political vision. You have been pursuing some important short-term goals, like the introduction of a minimum wage. But you have no plan for how to make a comprehensive welfare state sustainable for the future. And you are committed to liberal values that are dear to my heart. But, as your reluctance to force a real political debate about same-sex marriage once again demonstrated, you don’t dare to fight for these values even when a majority of Germans would support you.

More than anything else, though, my alienation from—and, yes, my anger at—the party is rooted in the fact that you have forgotten one of the oldest and most foundational principles of social democracy: the promise to fight for all human beings, regardless of whether they happen to be German—or Syrian or Ukrainian or Greek.

My conscience will not stand for making the lives of immigrants even worse. Germany already treats refugees and asylum seekers in an intolerable way. People without papers are turned away from German hospitals, even if they are seriously ill. For months on end, asylum seekers are not allowed to leave a small radius around their randomly assigned shelters. As though all of that weren’t bad enough, you just voted for new legislation that classifies refugees desperate enough to hand their savings over to dangerous smugglers as criminals—or simply locks them up. At a time when prospective homes for refugees are going up in flames all over Germany, you are making life worse for immigrants, not standing up for our principles. The innumerable comrades who had to find refuge in other countries because they steadfastly fought racism and fascism during the SPD’s darkest, and most noble, hours would be ashamed.

My conscience will not stand your indifference towards the victims of Russian aggression. Over 5,000 civilians have died in Ukraine in the last two years. Frank-Walter Steinmeier, the foreign secretary, seems to me to be too optimistic about the prospect of solving this crisis without confronting Putin—but at least he knows the identity of the true aggressor. Helmut Schmidt and Gerhard Schröder, the last Social Democratic chancellors of Germany, by contrast, have dismissed Russia’s annexation of the sovereign territory of another state as a minor matter, or even defended it. That is a deep violation of the internationalist principles of the SPD. And yet their stance is popular among the party’s base, where a clichéd anti-Americanism is often accompanied by a delusional preference for Russia

The SPD's short-sighted, nationalist policy toward Greece is the immediate trigger for my alienation from the party.

But it is your short-sighted, nationalist policy toward Greece—which is also to say, your betrayal of the social democratic dream of a united Europe—that is the immediate trigger for my alienation from the SPD. My conscience, dear Sigmar, just will not stand for that.

For weeks, the SPD has willingly participated in Germany’s self-righteous campaign against Greece. A social democratic policy would have meant fighting for the long-term interests of ordinary people in both Germany and Greece. How can we create equitable growth in the eurozone even as we offer Greece a future worthy of that name? But instead of going in search of pragmatic answers to those difficult questions, you have joined Wolfgang Schäuble, the conservative finance minister, and Bild, the country’s biggest tabloid, in cheap moralizing. Like them, you bullied and lectured, telling Greeks to leech themselves to health by spending less. No matter that leading international economists have long called austerity part of the problem, not part of the solution. And no matter that the deal that has now been struck can—as even the IMF acknowledges—neither ensure that Greece will ever repay its debts, nor solve the eurozone’s deep structural problems.

The SPD has once again made common cause with the gravediggers of a noble internationalist idea.

In a joint article with Martin Schulz, the president of the European Parliament and a member of the SPD, you say that, in these days, we have “passed an historic test.” What cheek. In truth, you have helped to destroy the last hope for a common, democratic, solidaristic Europe. For that is what last weekend’s decision of the Eurogroup, which a great majority of “our” MPs will obediently shepherd through the Bundestag in the next few days, actually represents. After this ugly week of German moralizing and Greek humiliation, the idea of an ever-closer union of European nations is a thing of the past. The SPD, running scared of the supposed force of the people’s nationalist mood, has once again made common cause with the gravediggers of a noble internationalist idea.

The history of social democracy contains both moments of indescribable courage and of abominable cowardice. I admire the comrades who were steadfast enough to remain true to the SPD when Hitler took power in 1933—but also those comrades who had the clairvoyance to leave the SPD in 1914, when the party supported Germany’s entry into World War I. Thankfully, we live in less dramatic times. But a leadership that betrays the party’s principles—principles I still hold dear—at the first sign of crisis no longer speaks in my name. That is why I am resigning my membership today.

I lost the little book that is sent to all new party members when I moved a few years ago, so I cannot return it with this letter. Perhaps that’s for the best. The ideals it contains would be cause for all too obvious, all too bitter irony. And perhaps I still hold on to a shred of hope that my former party might, one day, remember its internationalist principles. If that happens, I might once again go in search of the book I had been so proud to call my own back when I was a 13-year-old in awe of social democracy’s history and promise.