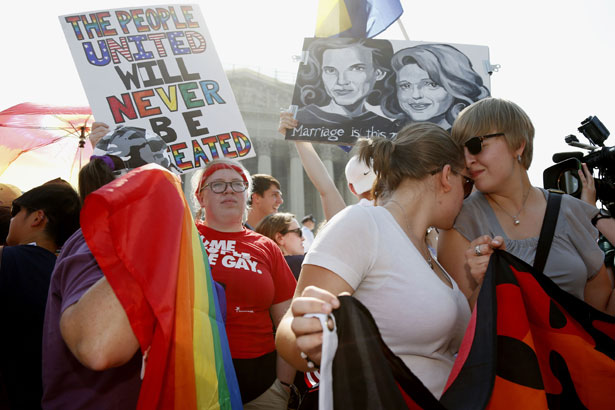 Protesters rally for marriage equality at the Supreme Court on the day DOMA was ruled unconstitutional. (AP Photo/Charles Dharapak)

​The US Supreme Court decided on Monday not to review any lower-court rulings that allowed same-sex marriage in Indiana, Oklahoma, Utah, Virginia and Wisconsin. It’s likely the final word on the matter in those states, and marriages are expected to begin there immediately.

Lower courts have unanimously struck down bans in those states, and since the Supreme Court denied petitions for review, it’s the end of the legal road for opponents of gay marriage in those states. Accordingly, marriage licenses to same sex couples can now be issued. County clerks in Indiana are preparing today to sign them, and Virginia Attorney General Mark Herring tweeted that marriages can begin at 1 p.m. there:

The 4th Circuit says their mandate will issue at 1 PM & marriages can then begin. What a momentous & joyous day for thousands of Virginians.

The appeals courts that decided the cases in those five states also have six other states in their judicial districts: Colorado, Kansas, North Carolina, South Carolina, West Virginia and Wyoming. That means gay marriage is essentially a foregone conclusion there. Once that happens, thirty states will allow same-sex marriage.

The Court’s decisions surprised some analysts who expected the justices to take up the issue. But Justice Ruth Bader Ginsburg said recently the Court was unlikely to get involved until lower courts were conflicted on gay marriage, and as noted, the lower courts were unanimous in striking down the bans in those six states.

In United States v. Windsor, the Court struck down part of the Defense of Marriage Act and asserted some logic suggesting banning gay marriage was unconstitutional, but as Chief Justice John Roberts noted in his dissent, the Court didn’t actually take up the question of whether states could ban it. It may yet—and until it does, gay marriage isn’t cemented into the nation’s laws—but it’s increasingly looking like American jurisprudence is moving in that direction.