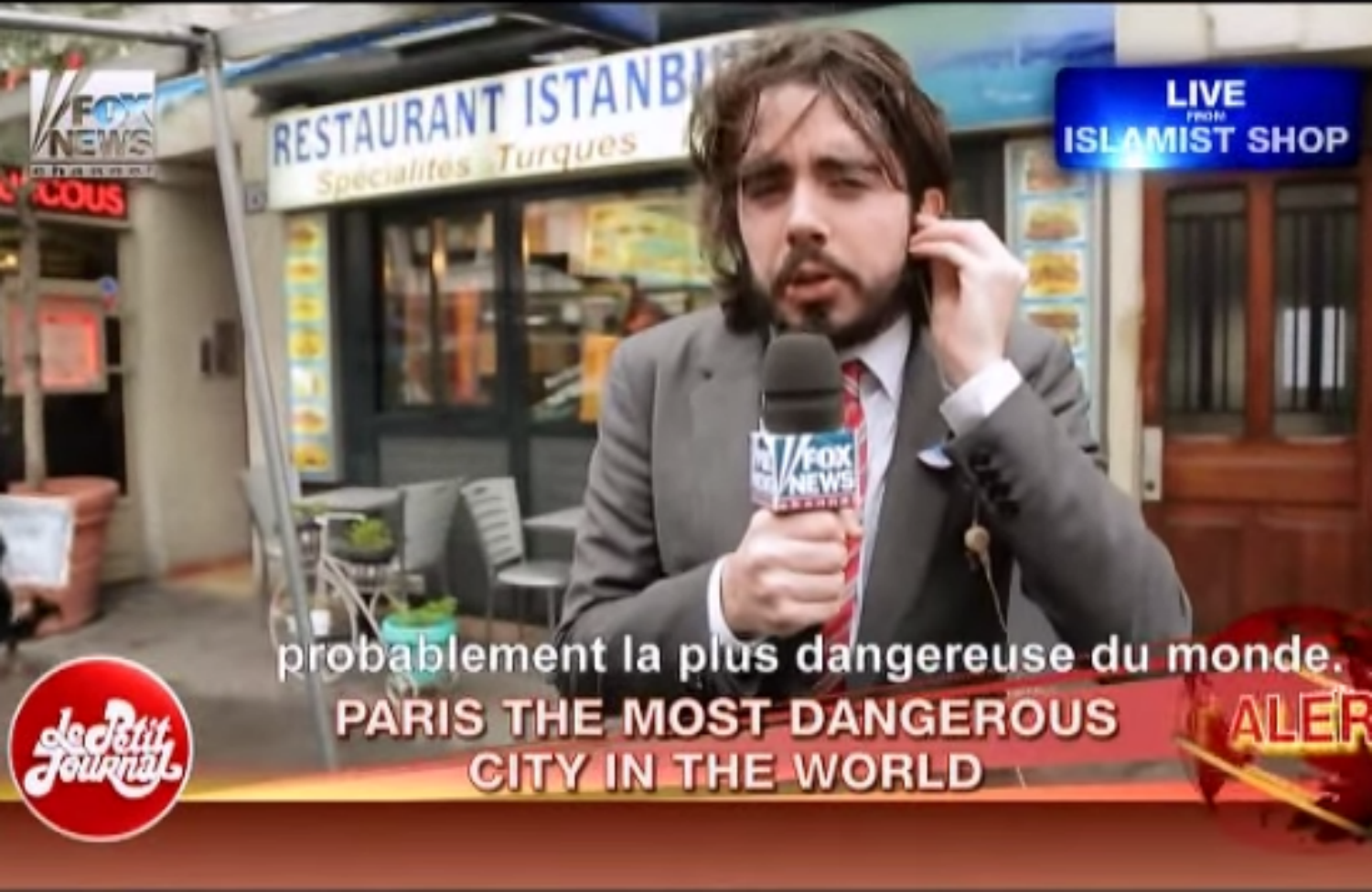 It’s a true clash of civilizations: France vs. Fox. Fox and the right have been deriding France as a left-banky, “old Europe,” weak-sister nation ever since it refused to support George W. Bush’s Iraq war. But now, in a turnaround, the French are pummeling Fox—with savage satire and threats of lawsuits, and gleefully transforming Roger Ailes’s bully boys into a bunch of Bianca-spraying surrender monkeys.

It’s Fox’s penchant for no-facts zones, not to mention its Islamophobia, that led to this fix. Paris Mayor Anne Hidalgo said this week that she may sue Fox News over its false portrayal of her city as full of frightening “no-go zones,” where only Muslims are allowed and police dare not tread. “The image of Paris has been prejudiced, and the honor of Paris has been prejudiced,” she said. And in the sort of dig you might expect from Russell Brand, she tweeted something about the “stigmatizing stupidity of Fox News.”

The lawsuit, if Hidalgo goes through with it, would seem to have almost no chance of succeeding in the United States, given that libel law here requires proof of “actual malice” and Fox’s actual stupidity could fall short of that. Plus, there’s no real precedent for a city suing for libel. If, however, a suit were filed in France, where standards for proving libel are different, it could, Gawker speculates, make life a little tougher for Fox.

Whether or not Hidalgo sues, she was probably emboldened by the truly breaking news! that Fox had apologized not once but four times recently for its repeated claims that France and much of Europe are pockmarked with areas where Sharia, not local law, rules—“like a caliphate within a particular country,” as Fox’s Judge Jeanine Pirro eagerly pointed out.

Pirro was one of the apologizers, which she did almost with a smirk. She previously had “terrorism expert” Steve Emerson on her show, where he claimed that Birmingham, England, was a city-sized no-go zone and was “totally Muslim.” (In fact, the population is closer to 22 percent Muslim.) British Prime Minister David Cameron called Emerson “a complete idiot,” and Fox soon released a statement saying he was unlikely to appear on air again. (Emerson apologized, profusely, on his website.)

Maybe even more embarrassing was journalist Nolan Peterson telling Fox & Friends’s Elisabeth Hasselbeck that there are “741 no-go zones throughout France.” He said his own past trips to Paris were “pretty scary. I’ve been to Afghanistan and Iraq and Kashmir, India, and at times, it felt like that, those places in these no-go zones.”

Turns out, as Snopes found, the “no-go zones” are an international urban myth based on a bad translation for “zones urbaines sensibles” (ZUS) or “sensitive urban zones,” areas that “are not exempted from policing or French law, and are simply targeted for renewal initiatives.”

Fox left it to host Julie Banderas to give a surprisingly detailed mea culpa:

Over the course of this last week, we have made some regrettable errors on air regarding the Muslim population in Europe, particularly with regard to England and France.

Now this applies especially to discussions of so-called no-go zones, areas where non-Muslims allegedly aren’t allowed in and police supposedly won’t go. To be clear, there is no formal designation of these zones in either country and no credible information to support the assertion that there are specific areas in these countries that exclude individuals based solely on their religion.

Meanwhile, Sean Hannity has been one of the more vociferous zone-truthers, squawking, “Why would France or any other country allow Muslims that have come into the country to basically take over portions of the country? That is madness to me!” I pre-apologize if I’m wrong, but I don’t recall seeing an apology from him, or, for that matter, from any of Fox’s name-brand males. (Several guests and hosts on CNN had also mentioned no-go zones, though far less egregiously than Fox, and yesterday Anderson Cooper apologized for that.)

But why would Fox News apologize at all? Other than the rare “we regret if anyone was offended” non-apology, substantial sorries aren’t in their DNA. CNN media reporter Brian Stelter figured maybe it’s that Fox owner Rupert Murdoch has such “big interests in England.” Then, of course, Murdoch is still trying to live down his massive hacking scandal, as well as his tweet that even if most Muslims are peaceful, “they must be held responsible” for “their growing jihadist cancer.” (This led J.K. Rowling to Voldemort him, tweeting: “I was born Christian. If that makes Rupert Murdoch my responsibility, I’ll auto-excommunicate.”)

But it’s also nice to think that, coming full circle after the Charlie Hebdo attacks, Fox is apologizing because it’s been the target of merciless satire. Not necessarily from US satirists like Jon Stewart, but from France’s version of The Daily Show, Le Petit Journal. Its host, Yann Barthès, has been making Fox, heretofore barely known in France, into a laughingstock. “The credibility of the Fox News clowns disappeared,” he said, “when they show a map of Paris with some ‘no-go zones’.”

Barthès followed up with the hilarious gag of sending “Fox reporters” “Mike” and “John,” armed only with American flag pins, into the wilds of Paris, where they freak out over couscous signs and bearded men (blatantly ignoring their own beards). It’s a little Jerry-Lewis-with-an-anvil, but they nail Fox hysteria with “massive alerts!” and animated fires in the corner of the screen. And whenever Mike and John get scared, they nervously spray their mouths with breath freshener.

Which itself says something about how Fox operates.