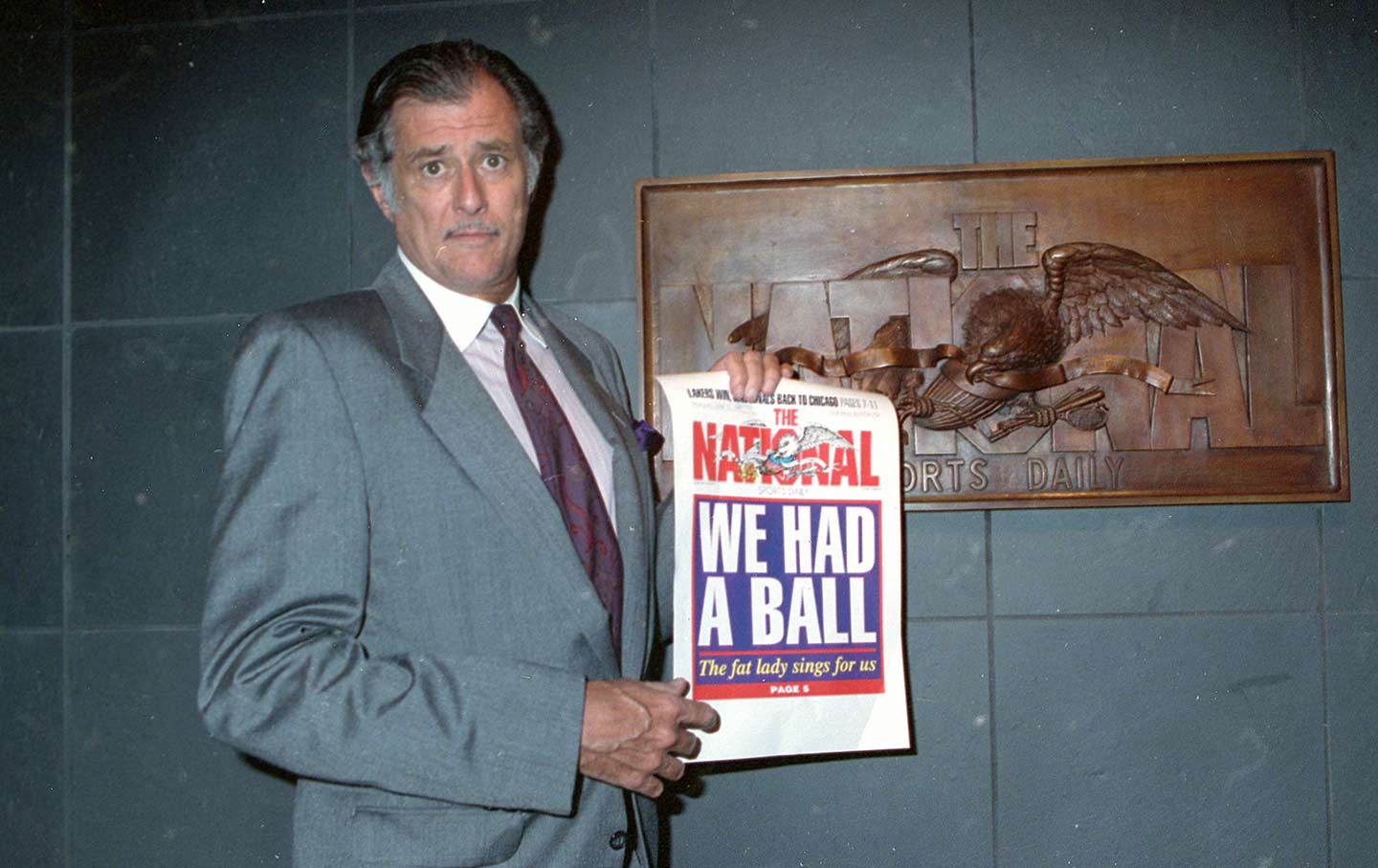 Frank Deford holds a copy of The National Sports Daily at the newspaper's offices in New York on June 12, 1991. (AP Photo / Susan Ragan)

Frank Deford was a part my family lore years before I was born. My father was a student reporter in 1958 and had a young running buddy from Baltimore named Frank Deford.

The story my dad still loves to tell, perhaps more than any other, was about the time in 1960 when they covered Elvis Presley’s return from the army, and Elvis was aggressively courted in full view of the press by a young starlet named Tina Louise (later Ginger on Gilligan’s Island). My dad—a terrifically detailed storyteller—always brought the Elvis/Tina Louise spectacle to life and would speak Frank Deford’s name with a terrific pride that they were colleagues, a pride the young me didn’t understand. (I barely knew who Elvis was either.)

Then, when I was 12 years old, I understood the gleam in my dad’s eye. I was slumped down in my school library skimming a back issue of Sports Illustrated and found The Rabbit Hunter, an incisive, elegant article by Deford that explored a decidedly inelegant person, Indiana University basketball coach Bob Knight. To learn that sports writing could also be storytelling about flawed, three-dimensional people was life-altering.

Soon I read everything by Deford I could find, from his long-form (before it was called long-form) articles in Sports Illustrated to his page-turner paperback novels, to the devastating memoir Alex: The Life of a Child, about his daughter’s struggle with cystic fibrosis and her death at the age of 8.

Deford, to my young wonder, could write about the shattering tragedy of his child’s death, or a boxer’s lament over a lousy fight, or a sudsy, fictional sports epic like Everybody’s All American, and immediately make you feel like you were entering some kind of virtual-reality zone, viewing the story from the inside.

This was my only connection to Frank Deford for 15 years: my dad’s stories and my own insatiable need to read all he put to the page. Then, in 2005, trying slowly to build my own sportswriting career, I wrote a book called What’s My Name, Fool?, with a then-fledgling, now-ubiquitous radical press, Haymarket Books. My publisher asked me to find a blurb that could make some ripples in the sports world. I contacted Deford via e-mail with a great deal of trepidation. He responded to me almost immediately with his phone number and asked me to call. When I did, I punched all of the numbers but the last one about five times before finding the nerve, my hand and ear slick with sweat. When I finally made contact, the first thing he said to me was, “Dave Zirin… Jim Zirin’s son, my goodness… Did you know that your dad and I covered Elvis Presley?” He then told me his version of the story, which was exactly like my dad’s, shaming a son who thought his father maybe had a penchant to gild the lily.

Deford gave me the blurb, and his public endorsement, where he lauded the idea of someone “taking sports to task in a manner we haven’t seen in some time,” opened doors for me I had always assumed would remain closed.

Over the years I was able to get to know Frank. It was a joy. He was a throwback, with his pencil mustache, effortless charm, and easy grace. He did not walk into a room so much as glide, wearing a suit that looked freshly pressed even if he had been caught in the rain. Frank was tall with large shoulders and a narrow waist, so every coat and tie on his frame looked like a zoot suit, making it seem even more like he came from a different era, a time when you could be cool without being an asshole. Put another way, imagine if the Kevin Kline of your dreamy imagination was a sportswriter. That was how Frank Deford projected himself onto the world.

Beyond the superficial, he was always kind, with sharp advice that never came with a hint of condescension. And most importantly, he shared his passion for the written word. It is difficult to find a sportswriter under 50 who wasn’t influenced by his ability to provide nuance and shading to sports heroes who previously lived in a purgatory of one dimension.

This sportswriting legacy wasn’t conscious. As he said to me in a 2013 interview, “I just wanted to write. I wanted to be a writer as soon as I learned how to write. It didn’t have to be sports, but sometimes life takes you by the scruff of the neck and you go with it. And sports had everything to me: the characters, the drama, the settings.… if you can’t write sports, get out of the business.”

In 2012, we shared a stage in Charlottesville at the Virginia Festival of Books. This gave me the opportunity to tell him in front of a couple hundred people, with a catch in my voice, “You are the reason I wanted to be a sportswriter.”

He answered rakishly, without missing a beat, “My apologies.” After the laughter died down, he looked out to the audience and said directly to the crowd, “If you want to know how I know this guy, let’s start by talking about his dad. His dad and Elvis Presley.”

He then spun that yarn of Elvis Presley and Tina Louise into velvet. The crowd loved it. Frank spoke to those 300 people like he had a drink in one hand and they were a circle of five.

Frank showcased the finesse and power of the written word and, yes, he made me want to read. Now that Frank is gone, without his prose to amplify what flashes in front of our eyes, the world is a decidedly duller place. But he would roll his eyes at the idea of us in mourning, with dour looks affixed to our mugs. Instead, he would want us to carry the torch of storytelling, and aspire to the wicked grace that he reached for with every article. The best tribute to Frank Deford, in a world of emojis, would be a commitment by writers to never stop writing, and always make the effort to color the world more brightly by exploring shades of gray.