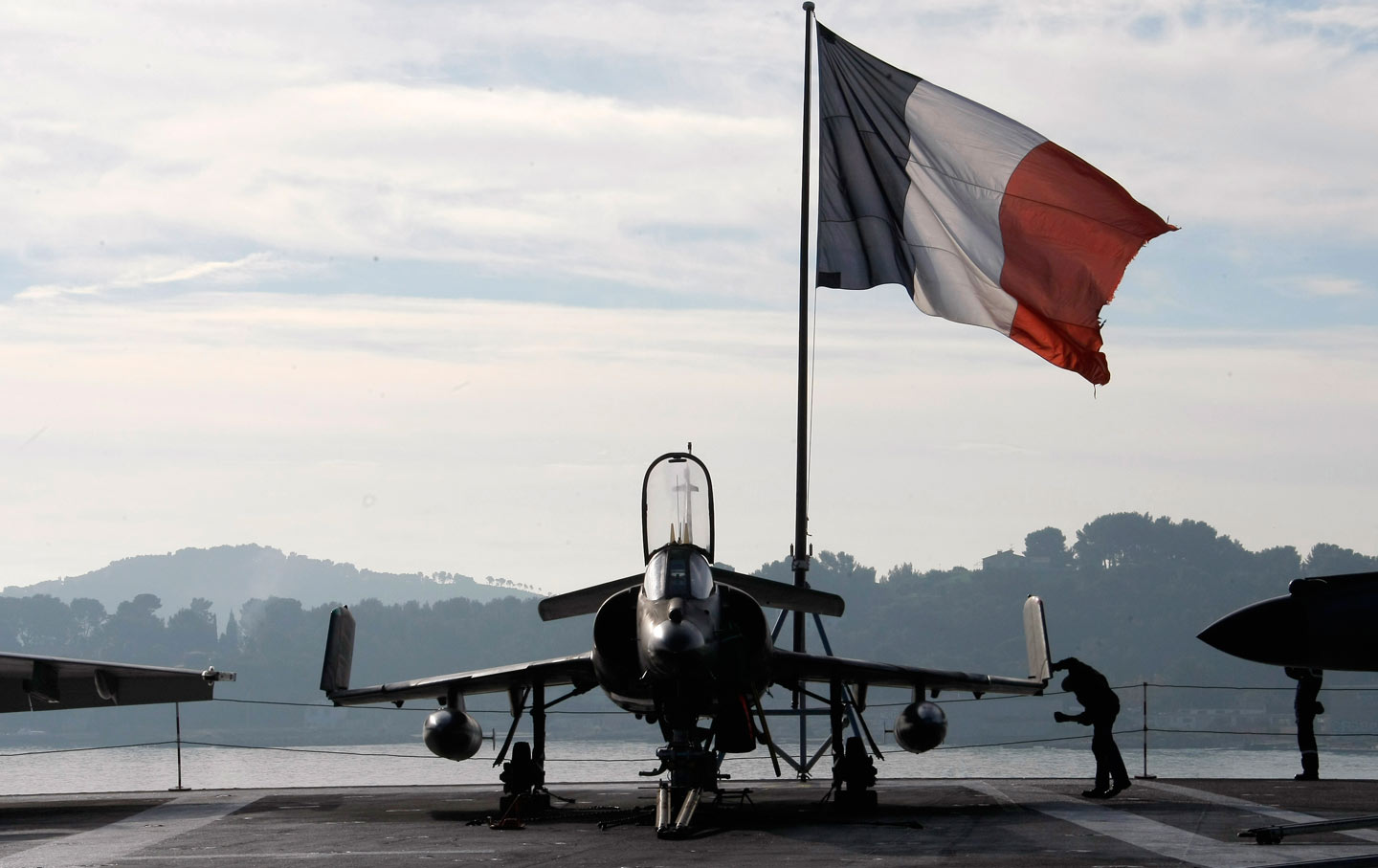 When a foreign terrorist organization launches an attack on another country’s soil, it seems inevitable that the targeted nation responds by some military force. It’s a perfectly logical path forward: One must “do something,” it goes. And yet, looking at France’s response to the horrific attacks over the weekend in Paris, one must be forgiven for wondering what such a response seeks to and can accomplish. France, after all, was already flying bombing sorties over Syria directed against the Islamic State (ISIS)—the very justification for the Paris attacks—when the group, as nearly all the evidence indicates, orchestrated the deaths of at least 129 people in coordinated attacks on Paris. It was left, therefore, to France to not launch a new military attack but to ramp one up.

The early returns from Islamic State’s self-proclaimed “caliphate” are in: according to a report in The New York Times, the increased bombings—dozens of sorties in a matter of days against the terrorized town of Raqqa, the caliphate’s designated capital—resulted, thankfully, in no civilian casualties, but not many blows to ISIS either. Here’s the Times:

Several people in Lebanon, Syria and Turkey who have been able to make contact with relatives in Raqqa say the recent French airstrikes—a barrage of about 30 on Sunday night and seven more on Monday—did not kill any civilians. But neither did they inflict serious military damage, those people said, instead hitting empty areas or buildings, or parts of the territory of factory complexes or military bases used by the Islamic State.…

More French airstrikes, reaching 25 to 30, struck Raqqa late Tuesday, according to the Syrian Observatory for Human Rights, a monitoring group in Britain that has a network of contacts in Syria. Many of the strikes hit deserted areas that had already been struck, but casualties were reported in addition to property damage, the group said.

Without putting too fine a point on it, the French response, so far, is something of a hollow “shock-and-awe”: lashing out with overwhelming force, but not in a manner that accomplishes much. That would seem to be a break from what RAND Corporation analyst Michael Shurkin, writing in Politico, called the “French way of war”: “an insistence on modest objectives, on limiting strictly the aims of a military invention in line with a modest assessment of what the military can accomplish.” Perhaps, as Shurkin says, the bombing runs are merely the opening salvo of a more well-thought-out broader intervention—remember, France was already bombing—but it’s difficult to see what the modest military goals going forward would be.

Shurkin points to two relatively successful recent French interventions, in the Central African Republic and Mali. Both were notably different from the fight against the Islamic State, but the latter, for its part, fits the basic bill of seeking to unseat jihadi forces from territory they had seized in the northern part of the country. But that, too, was different, at least to what has been floated so far for a French intervention in Syria: beating back jihadis in Mali involved units from more than 25 regiments of the French military. (What’s more, the Malian insurgency continues to simmer.) In other words, there were plenty of, as the ubiquitous descriptor goes, boots on the ground. Is France prepared to mount a similar effort in Syria?

That’s a question for the “do something” chorus in America, too. Many American politicians so far have shied away from putting significant numbers of troops on the ground in Syria—though the usual suspects, the Lindsey Grahams of the world, have called for it and others have begun to discuss it as an inevitability. Here comparisons seem more apt to the Iraq and Afghanistan wars than to France’s foray into West Africa. If ground troops go in to unseat the Islamic State, what can we expect next? Like the two wars launched more than 10 years ago—both of which we are still engaged in to one degree or another—and unlike Mali, where a central government in Bamako stood at the ready (if incapable of retaking territory on its own), those part of Syria and Iraq dominated by the Islamic State are likely to be devoid of any centralized authority.

If the French are indeed thinking in their traditional “way of war,” perhaps they will offer answers; we can all hope such an effort could be successful without the costs entailed in Iraq and Afghanistan, where the costs of such lack of foresight are still being paid. For the meantime, doing something for the sake of doing something doesn’t appear to be doing much at all.