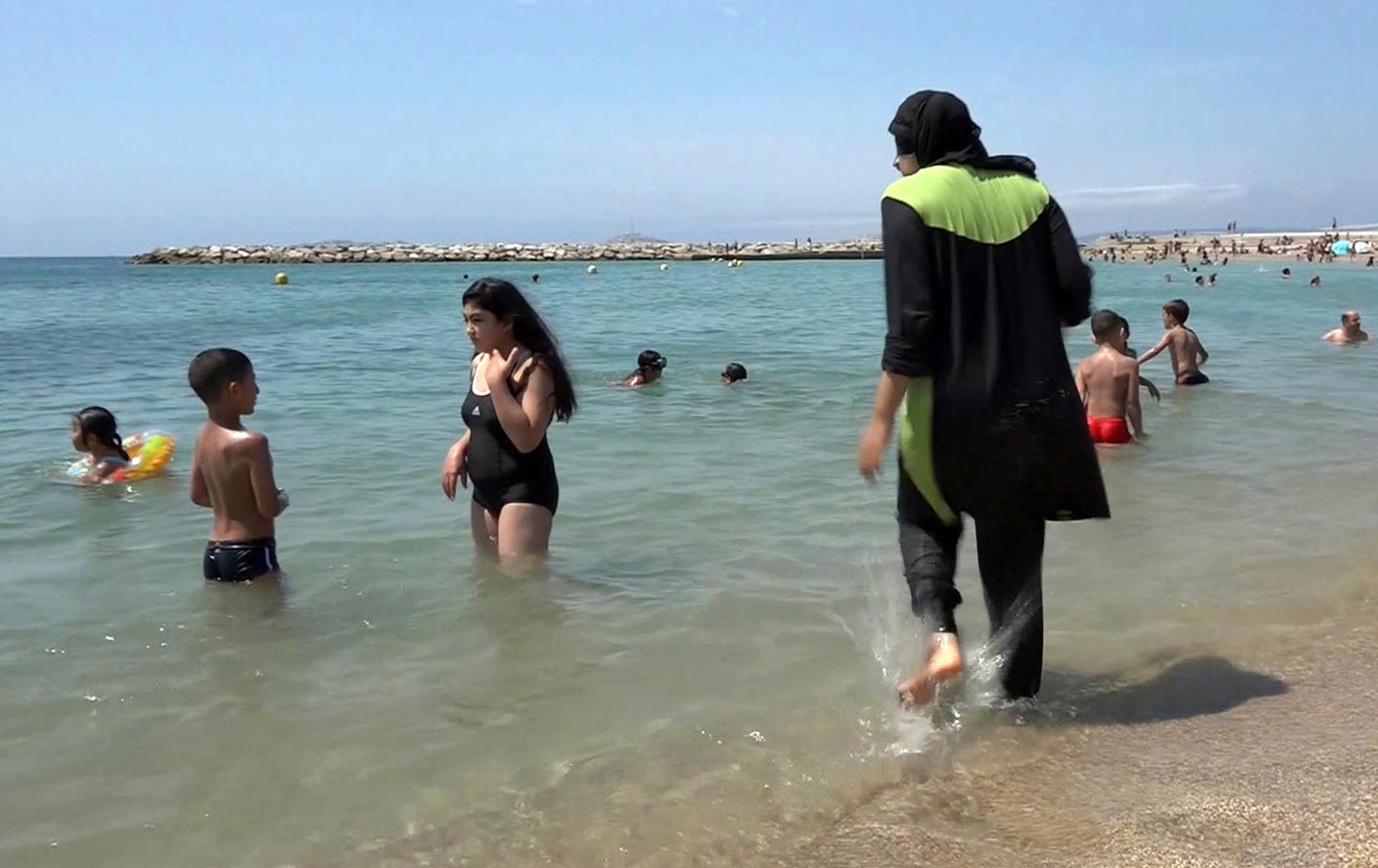 Oh, France, what is the matter with you? In the wake of the Bastille Day massacre of 84 by a Tunisian truck driver who plowed through a crowd in Nice, followed by the murder of a Catholic priest by jihadis in Normandy, Nice, Cannes, and several other beach towns have banned the “burkini,” the top-to-toe bathing suit for Muslim women. Never mind that few actually wear this religious wet suit, although it’s becoming more popular as more retailers market them. And never mind that the Tunisian truck driver seems not to have been particularly devout. Or that there’s something strange about insisting that women wear revealing swimwear against their will. Some Muslim women bathe in their clothes and hijab—will that be illegal too? What if you don’t go in the water but just sit on a beach chair fully dressed? (In fact, police officers just forced a woman on the beach in Nice to remove an ordinary tunic.) Speaking in Marseille, Prime Minister Manuel Valls declared: “The burkini is not a new swimwear fashion; it’s the transmission of a political project, against society, founded notably upon the subjection of women. Some people try to portray those who wear them as victims, as though we were calling liberty into question. But there is no liberty to subjugate women.” Laurence Rossignol, the minister for women’s rights, chimed in: The burkini “has the same logic [as the burqa]: hide women’s bodies in order to better control them.” (This is a comparatively reasonable comment from Rossignol, who last spring compared women who wear Muslim garb to “American Negroes who were in favor of slavery.”)

I actually agree with the critique of veiling. Whatever else it may be, it’s inextricably bound up, like the Orthodox Jewish dress code, with notions of female-only “modesty”—i.e., the acceptance of the female body as the site of sexuality, which must be concealed as a danger and provocation to men. If covering is just about faith, why don’t men do it too? Moreover, there are valuable aspects to France’s much-criticized policy of laïcité, the rigorous denial of a public role for religion, especially as compared with our own country. In France, for example, the Catholic Church doesn’t control one-sixth of all hospital beds and use government funds to deny women modern reproductive-health care. Public schools do not bring in religious zealots to lecture the students on the evils of birth control. You won’t find creationist propaganda in the bookstore at a national park. We could learn something from France about our own First Amendment, which seems to be morphing from the separation of church and state into the enabling of all sorts of religious bigotry and backwardness.

Even if you think Islamic garb is a fashion prison, it doesn’t follow that banning it is a path to liberation.

But how do bans on Islamic dress—the head scarf, the niqab, and now the burkini—free women? That would be true only if wearing them were enforced by Muslim communities regardless of women’s own preferences. This is the case in Saudi Arabia and Iran, where covering is the law, and in parts of many Muslim-majority countries by social custom. When France instituted its ban on head scarves in public schools in 2004, it was justified as necessary in part to protect schoolgirls from male relatives keen to control them. (Those views now seem overblown.) The same theory explains why the ban on wearing the niqab (the two-part full-face veil) in public calls for a €150 fine for the woman, but a whopping €30,000 fine and a year in jail for any person who forces a woman to wear it. (No one has yet been convicted.) As Ed Vulliamy points out in The Guardian, though, the penalty for wearing a burkini (€38 in Cannes) falls on the woman alone. Are those women subjugating themselves? “It is my choice to try and cover whilst poolside so I can feel comfortable and make the most out of my love for swimming, and my faith,” writes Shereen Malherbe on Muslimah Media Watch.

The apparent fact that some Muslim women want to wear burkinis doesn’t mean that the garment isn’t sexist. Sexism would never have become the powerful social force it is if women didn’t buy into it too. That’s why it’s easy to find women who think that a woman who won’t wear a burqa—or a knee-length skirt—is asking to be raped. Still, it’s hard to see pathbreaking Muslim Olympic athletes like the hijab-wearing American fencer Ibtihaj Muhammad or Egyptian volleyball player Doaa Elghobashy as lacking agency. Even if you think Islamic garb—or Orthodox wigs, or fundamentalist-Mormon prairie dresses—is a fashion prison, it doesn’t follow that banning it is the path to liberation.

In fact, it does the opposite: It fetishizes Islamic covering as a communal identity marker and turns it into a way of poking the majority culture in the eye. It also further marginalizes Muslim women. Not men, who dress as they please with no awkward questions about whether they truly want to sport that beard or crocheted skullcap. In France, street attacks on women in Muslim dress have increased since the niqab ban. A Muslim woman in a head scarf can’t work in a government job. According to a recent legal ruling, she can even be denied a job in a day-care center lest she give toddlers the wrong idea about a woman’s place. Prime Minister Valls even wants to ban the head scarf from universities. This isn’t feminism; it’s cultural panic.

Why not trust Muslim women to figure all this out for themselves over time, as other immigrants from patriarchal cultures have done? Why not make the effort to integrate them, rather than exclude them? Internet wags are laughing at a photo going around showing nuns on the beach in full billowing habit. Will French nuns be forced into bikinis too? (Obvious answer: Of course not, they’re French!) But nuns are a dying breed in France, and many orders abandoned the habit for modern dress decades ago. So if a few thousand want to stay full-medieval and swelter on the beach in their starchy robes, what’s wrong with that? Certainly, it’s not the government’s job to prevent them.

Listen to Katha Pollitt discuss the burkini ban on this week’s episode of the Start Making Sense podcast.