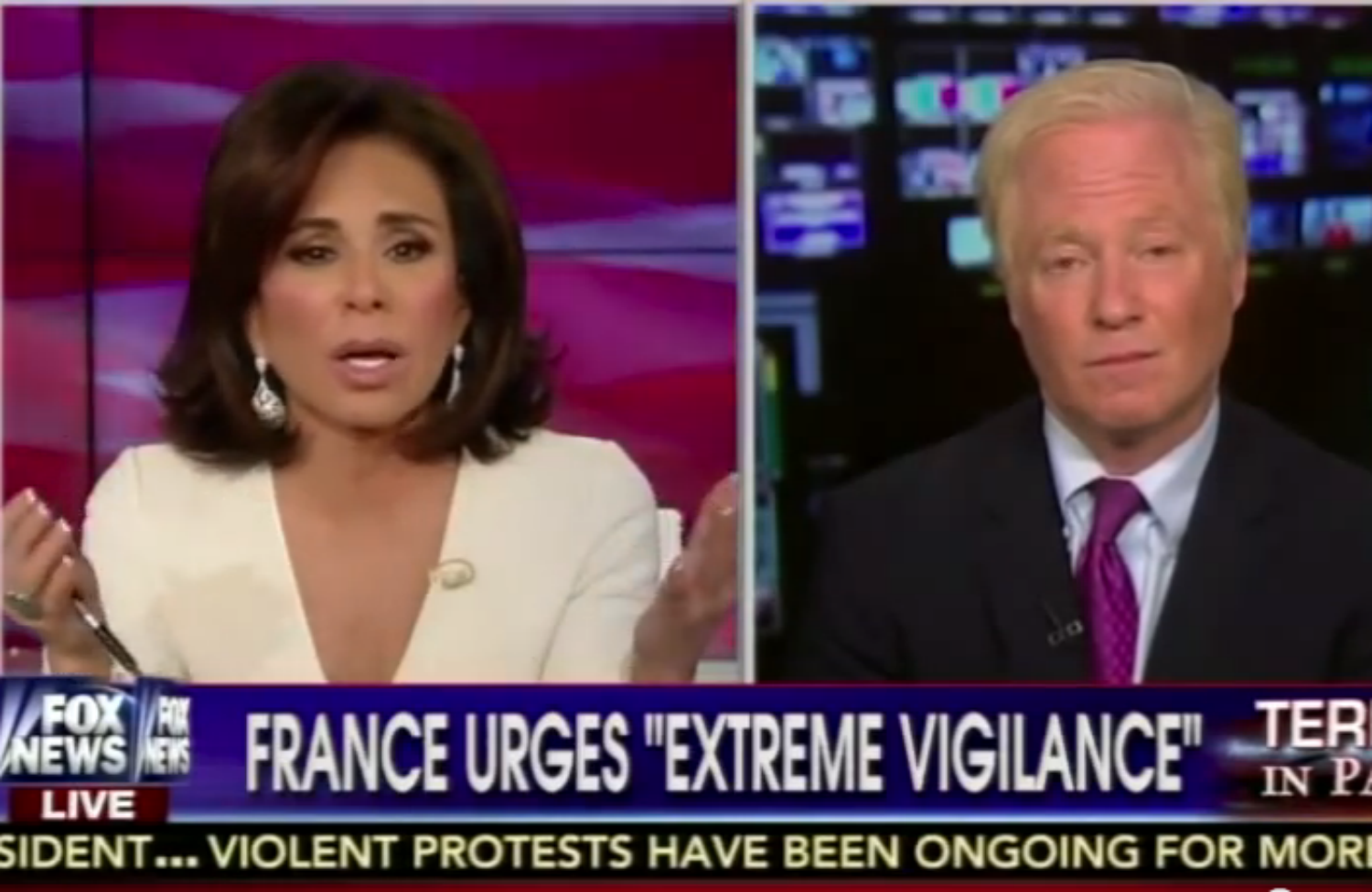 Fox News had what should be its defining moment recently. During an interview with host Jeanine Pirro—a failed Republican politician once married to a criminal tax evader—the self-credentialed terrorism expert Steven Emerson spouted a bunch of easily refutable nonsense designed to inspire even greater Islamophobia than is typically the norm on the network. “There are actual cities like Birmingham [England] that are totally Muslim, where non-Muslims just simply don’t go in,” he pretended, adding: “In parts of London, there are actually Muslim religious police that actually beat and actually wound—seriously—anyone who doesn’t dress according to Muslim, religious Muslim attire.”

This was just another day at the races for Fox News, a network that regularly pollutes our politics with a mixture of pernicious lies, purposeful ignorance and absurdly aggressive stupidity. On a different broadcast, Nolan Peterson, another self-credentialed expert, insisted that certain neighborhoods in Paris were governed by Islamic law to such a degree that French police feared to enter. “It was pretty scary,” he said. “I’ve been to Afghanistan, Iraq, Kashmir, India, and at times it felt like those places in the no-go zones.” Yet another expert suggested that the proper response to this problem was to “put razor wire around” the alleged “no-go zones” and catalog their terrorist-loving residents.

As per usual, this combination of xenophobic animosity and pompous idiocy barely raised an eyebrow in the so-called cable-“news” media. To the contrary, CNN offered its guests airtime to spout similar stories, and, equally typically, right-wing politicians took it and ran with it. Louisiana governor and likely Republican presidential hopeful Bobby Jindal warned that certain groups of immigrants are seeking “to colonize Western countries” by “setting up [their] own enclave[s] and demanding recognition.”

Again, not much new here to anyone who followed the conspiracy theories about President Obama’s birthplace, his religion, his actions (and those of Hillary Clinton) during the attack on the US embassy in Benghazi, the alleged attack by the IRS on conservative groups and, of course, Obama’s open invitation to ISIS terrorists to enter the United States via Mexico so they could infect God-fearing Christian Americans with the Ebola virus. What was different this time was that after the attack on Charlie Hebdo, the rest of the world was paying attention, and noticed that lunatics rule our political discourse. British Prime Minister David Cameron observed that Fox’s terrorism expert, Mr. Emerson, was “clearly a complete idiot.” The French television show Le Petit Journal visited the alleged “no-go zones” in Paris in search of bin Laden wannabes. And while the mayor of Paris did announce plans to sue Fox—thereby prompting that rarest of media phenomena, an actual apology—it was the widespread ridicule of Fox inspired by the incident that made it genuinely newsworthy.

True, we have Jon Stewart (and, until recently, Stephen Colbert), but the real secret to Fox’s success has been its ability to get the rest of the journalism and political world to take it seriously. Emerson, for instance, should never have been allowed near a TV camera in the first place. While his website might brag that he is “recognized as one of the first terrorism experts to have testified and warned about the threat of Islamic militant networks operating in the United States and their connections worldwide,” it fails to point out that his specialty is warning about the “threat” even when it has no connection whatever to the incident at hand.

Emerson first came to widespread attention twenty years ago, when he announced, after the bombing of the Alfred P. Murrah Federal Building in Oklahoma City that killed 168 people: “This was meant to inflict as many casualties as possible. That is a Middle Eastern trait. Oklahoma City is probably one of the largest centers of Islamic radical activity outside the Middle East.” A.M. Rosenthal, then a columnist for The New York Times—who called Emerson “America’s never-resting antiterrorism journalist, bless him,” and credited him with the “skill, determination and risk-taking (physical and professional)” that “helped shake government awake”—went on a similar journalistic jihad in the “paper of record” against the alleged “Mideast terrorist” nations responsible for the bombing, before it was discovered to have been homegrown on the American far right. He then went on to prescribe a series of official undertakings designed to “inform states that have helped terrorists that the era of forgiveness is over.” (Oddly, Rosenthal did not deploy this demand when the Reagan administration was regularly funding and arming terrorists in Central America and Southern Africa, and training them on US soil.)

Rosenthal quickly became a joke to most Times readers and was eventually forced out, despite his fifty-four-year career at the paper (with nine as executive editor). Fox, on the other hand, is still the undisputed powerhouse in cable news and perhaps television news, period. In prime time, it claims over 60 percent of the cable-news audience, bringing in a reported $1.2 billion in profits in 2014. Legitimate academic studies of Fox’s effect on its viewers demonstrate that it not only makes them more conservative but also less informed. However, instead of recognizing Fox for what it is—a danger to our democracy and a cancer to the cause of journalistic credibility—competing journalists have treated it as just another news organization, albeit one with a bit of a political bent. So, too, do most politicians—even the liberal ones who often find themselves accused of treason on its programs.

The French and British have shown what happens when the world pays attention to Fox, and demonstrated that mockery and derision are the only appropriate reaction to the nonsense it sells. Fox is the Nigerian prince/penis-enlargement pill of the American news landscape. It ought to be a genuine “no-go zone” for anyone who cares about truth in politics.