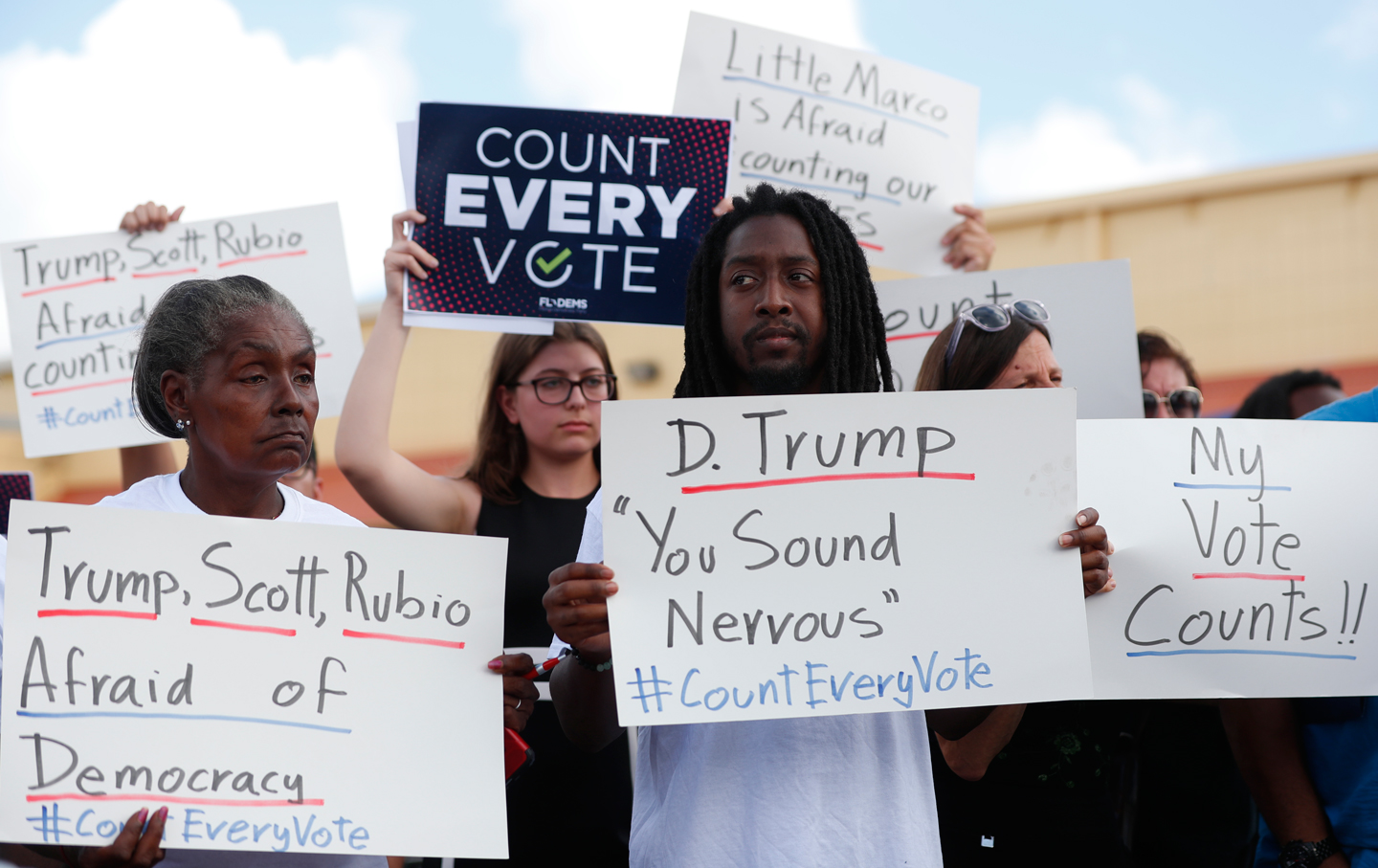 Eighteen years ago, I was sent with other union organizers to Florida to help prevent a political coup. We failed. By a 5-4 partisan decision, the Supreme Court stopped a recount that might have put Al Gore in the White House. Instead, we got George W. Bush—and with him the war in Iraq, huge tax cuts for the wealthy, and eight years wasted doing nothing to stop climate change. Now, as recounts are underway in Florida and Georgia for elected offices that may decide who sits on the Supreme Court and who gets to vote in 2020, we are at a similar crossroads. We cannot fail again.

In November of 2000, the people of Florida were ready to take action to defend democracy, but they were met with scorn, along with strict orders from leaders in the Democratic Party to not make trouble. Instead of marching in the streets and engaging in civil disobedience, they were put on lockdown, as the recount was put in the hands of high-powered lawyers. At the heart of the matter was a question fundamental to any democracy—whose vote counts? But instead of meeting this challenge at the right scale, the Democratic Party leadership shrank the strategy to a legal effort limited to collecting affidavits and mounting procedural challenges. This was a total disaster.

This year, the recounts in Florida and Georgia need to be different. The race for Senate between Democrat Bill Nelson and Republican Rick Scott looks like it’s headed to a manual recount, and the gubernatorial contest between Democrat Andrew Gillum and Republican Ron DeSantis could be headed to the courts. In Georgia, the Stacey Abrams campaign has successfully sued to have previously rejected absentee ballots counted.

These legal and procedural efforts are important—but they can’t be where the fight for a fair election begins and ends. It’s time to defend the freedom to vote in a way that stands a chance of working. This will require grassroots organizing and nonviolent direct action on a massive scale, with concurrent actions from people in other states aimed at crippling the economies of Florida and Georgia until African Americans, and all citizens, get their votes counted.

In this fight, the Democratic Party leadership needs to get out of the way. Instead, the people of Florida and Georgia should turn to the moral leadership of the faith community, who should occupy both states like a Woolworth lunch counter. The trade-union leadership should act independently from the party and have the nerve to encourage workers to unleash walkouts and strikes in key sectors (think West Virginia last spring). And does anyone doubt that the Parkland youth can lead giant student walkouts, double teaming with education unions to put hundreds of thousands of nonviolent freedom-to-vote marchers on the streets in less than 48 hours? Laws, including strike laws, will have to be broken—because the system is fundamentally broken.

Large organizations planning conventions in either state should threaten to take their business elsewhere. Pension funds could vote to divest from the companies behind the largest campaign contributions to Scott, DeSantis, and Georgia’s Brian Kemp. Consumer boycotts should target the same corporations until there is enough pressure to demand that all the votes get counted, no matter what the mishmash of arbitrary deadlines under Florida or Georgia law stipulates. Suspend all legal deadlines until all votes have actually been counted. In fact, in Georgia, there’s a serious case to be made for a redo of the entire election, removing Kemp from overseeing the process entirely, unlike the role he played as secretary of state the first time around.

When the Supreme Court handed George W. Bush the presidency, that action had dire consequences for all of us, especially the working class whose family members went to fight in what has become America’s longest war. Working people in this country had their savings ravaged as a result of his reckless handling of the economy, plundering the value of people’s homes and draining their retirement accounts. And Bush appointed a labor board that delivered endless blows to working people as they tried to build new unions or exercise their right to strike.

Today, the same minorities who had their votes stolen in Florida in 2000 are in the crosshairs again, in no small part due to a president who encourages right-wing extremism. Jews are being shot in synagogues, African Americans in churches and grocery stores; women are being shot in yoga studios.

There’s no more time to wait. The Republicans have their eyes are on the prize. They understand that the outcome of these recounts will profoundly affect the 2020 elections, including whether or not 1.4 million people recently given back the vote in Florida will actually get a chance to exercise that right. Sometimes to make democracy work, we have to slow it down. What happens in Florida and Georgia will have consequences for our democracy, the country, and the planet. This is a job for the Resistance, not the Democratic Party leadership.