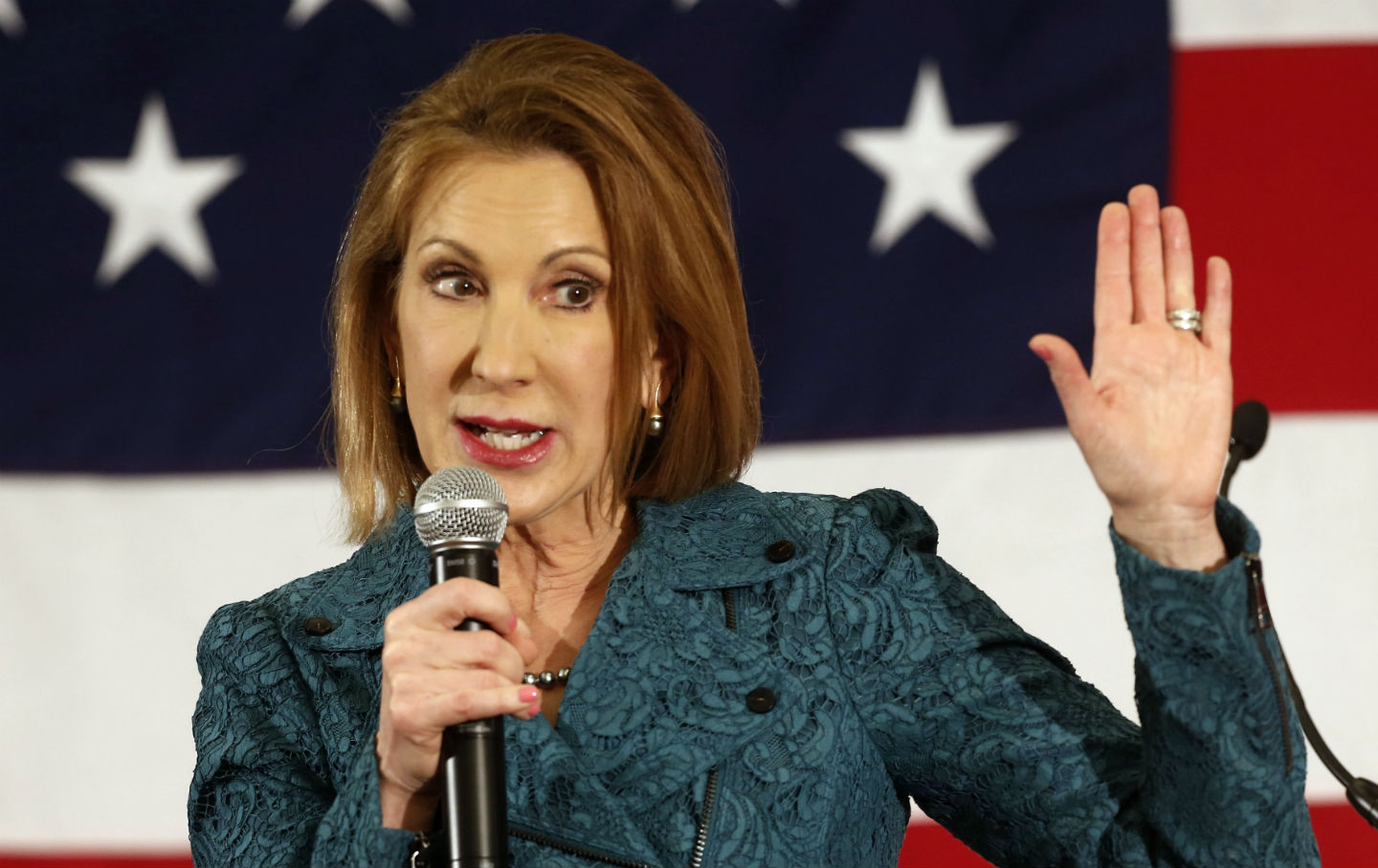 At the Republican debate last week, Carly Fiorina delivered what right-wing pundits deemed “the most affecting moment” of the night: a grisly description of undercover videos taken by anti-abortion activists during a sting operation against Planned Parenthood. “Watch a fully formed fetus on the table, its heart beating, its legs kicking while someone says, ‘We have to keep it alive to harvest its brain,’” Fiorina said, blinking forcefully with each syllable.

It was a stunning, visceral narration, one that helped boost Fiorina to second place in the polls—and a false one. Nothing in the 12 hours of tape edited and released by the Center for Medical Progress shows what Fiorina said it does. What Fiorina was referring to, presumably, was a clip of a woman who claimed to have seen an aborted fetus with a beating heart and talked about “procur[ing] brains”; CMP overlaid the interview with gory stock footage. But Fiorina has been adamant that she’s “seen the images” she referred to in the debate; the most charitable interpretation is that she was duped by CMP’s misleading editing. Asked on Sunday whether she acknowledged that the footage doesn’t exist, Fiorina responded, “No, I don’t accept it at all. This argument is about whether or not we as a nation are going to stand by while taxpayer money is being used to fund this kind of butchery.”

If Planned Parenthood’s misconduct is really so self-evident, why is Fiorina trying so hard?

Since it’s not actually possible to watch the footage Fiorina described, the PAC supporting her recently tried to create it. A heavily-edited one-minute video posted to YouTube on Saturday and emailed to her supporters contains clips of Fiorina at the debate, interspersed with images and audio cobbled together from a variety of sources. There’s an image that seems to be a fetus with its limbs moving, but it’s not from Planned Parenthood; it’s from the Grantham Collection and Center for Bio-Ethical Reform, two anti-abortion groups known for creating misleading graphics. The audio, meanwhile, was taken from an unrelated clip from CMP. The video then cuts to an image of a stillborn baby that again has nothing to do with Planned Parenthood, and was used without the permission of the parent.

On Wednesday, Planned Parenthood sent a letter to the Fiorina campaign and the PAC responsible for the clip (the two are legally distinct), arguing that the “fraudulent video is beneath a serious candidate for the presidency, and you should take it down immediately.” To get a sense of how much the footage had to be manipulated to get something close to what Fiorina described at the debate, here’s a clip-by-clip breakdown, provided by Planned Parenthood:

TELL CONGRESS: NO SHUTDOWNS, NO CUTS TO PLANNED PARENTHOOD

Even conservative anti-choicers admit that the “exact scene” that Fiorina describes does not exist. But that doesn’t matter, according to National Review’s Jonah Goldberg, because “anybody who has watched the videos would find Fiorina’s off-the-cuff account pretty accurate.” By “accurate,” Goldberg seems to mean in line with his pre-existing beliefs about Planned Parenthood and abortion. It’s okay that the image that “strike[s] a chord” is of a stillborn, not aborted, baby, because it’s being used as a “dramatic device” to highlight what to Goldberg is the moral affront of late-term abortion.

As Goldberg indicates, Fiorina’s distortions probably won’t matter to people who desperately want to believe that Planned Parenthood is in the business of “butchery” instead of providing essential healthcare. But if Planned Parenthood’s misconduct is really so self-evident, one has to wonder—why is Fiorina trying so hard?