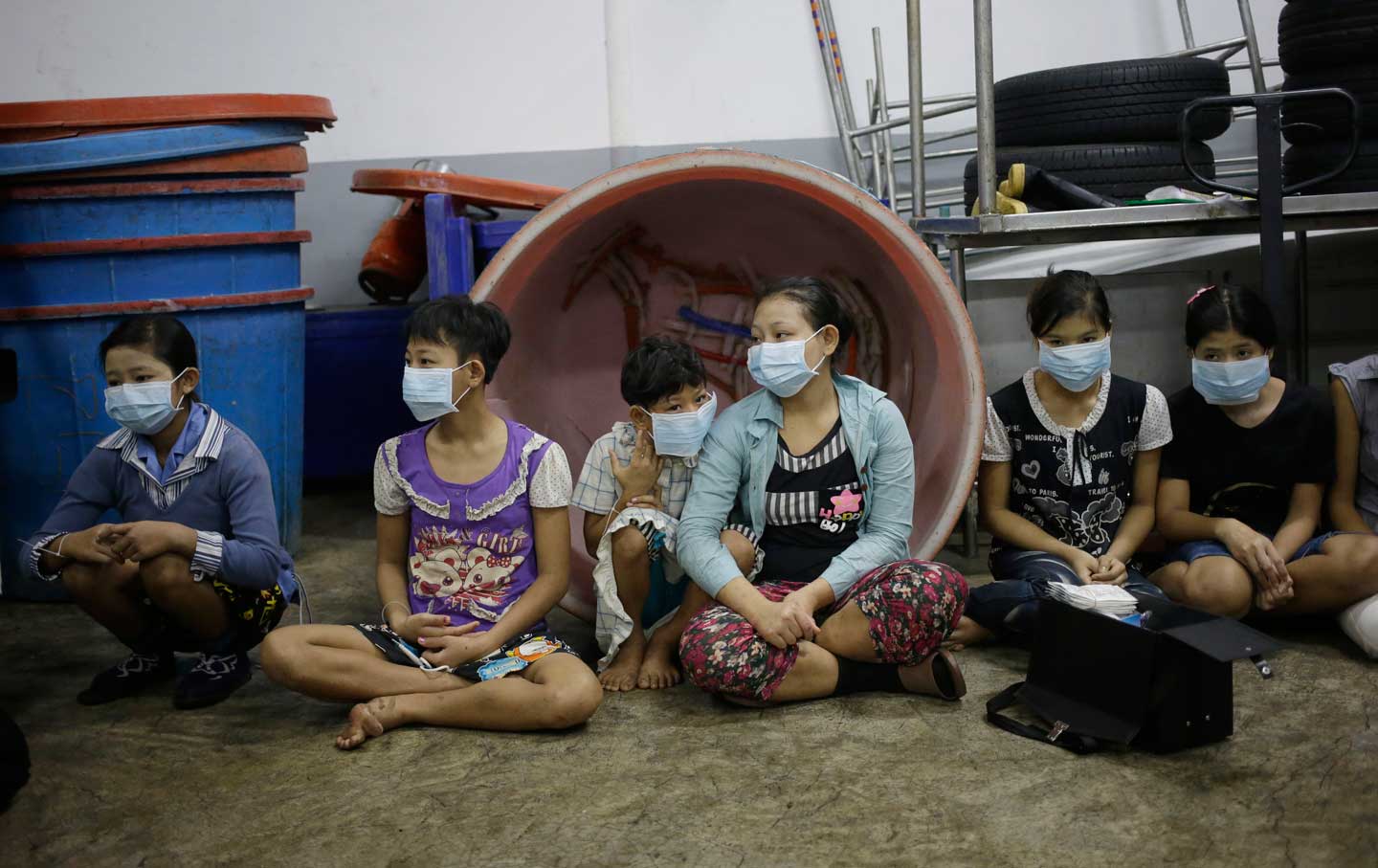 Children and teenagers wait to be registered by officials during a raid on a shrimp shed in Thailand. (AP Photo / Dita Alangkara)

In a rare moment of bipartisan unity, Congress and the president have finally reached a consensus: They agree that slavery is a bad thing.

Lawmakers just approved a measure aimed at getting slave labor out of free trade. The legislation—passed not a day too soon, even by Washington standards—closes a loophole in trade laws that had for decades quietly permitted the exploitation of forced labor in supply chains of imports. The 1930 Tariff Act, which generally barred imports that regulators determined were made with enslaved, coerced, or child labor, allowed a glaring exemption for products that were needed to meet US consumer demands. Reflecting America’s peculiar market exceptionalism, the policy explicitly prioritized the “rights” Americans to unbridled consumption, over the human rights of people in bondage abroad, as long as they were producing something we really, really wanted.

Over time, this exemption has effectively been broadened to facilitate the import of goods ranging from seafood to sneakers, one of many obstacles to government oversight over exporters profiting directly or indirectly from coerced labor.

The reform follows critical reports exposing systemic labor violations, including enslavement, in major export industries—particularly complaints about migrant-labor trafficking on Southeast Asian fishing vessels raised by officials, labor organizations, and international media. Tucked into a trade bill the president is expected to sign soon, the provision empowers Immigration and Customs Enforcement (ICE) to block incoming shipments of goods tied to forced labor. The task of investigating firms linked to forced labor would be handled by the Department of Homeland Security. According to the Associated Press, Homeland Security agents in 46 countries would be charged with monitoring supply chains.

Erasing the loophole has been hailed as a political milestone by advocates. Businesses have often bristled at such humanitarian-focused trade restrictions, preferring instead private, voluntary (and often toothless) efforts. Still, there is no guarantee of adequate enforcement resources for halting contraband products at the ports. Nor is it clear how investigators can effectively detect concrete evidence of coerced labor in product inspections, which will be primarily driven by individual complaints.

In the long term, enforcement power hinges on the convoluted structure of global manufacturing chains. Would imported chocolate that was made with cocoa sourced from child laborers in the Ivory Coast be intercepted through a customs check? How would a customs inspector evaluate Vietnamese-made sneakers imported from a law-abiding supplier, but with laces stitched by subcontractor that employed 12-year-olds? How many degrees of separation is required to hold a supplier, a multinational fashion brand, or a whole government accountable? (To say nothing of the forced labor systems that exist within US borders.)

According to Eric Gottwalt of the International Labor Rights Forum, another major hindrance to enforcement is the fact that ICE investigations would have to originate with a public complaint—many steps removed from the source:

ICE investigates only when a third party (civil society or, possibly, another part of the US government) makes an allegation that warrants investigation. If ICE’s investigation finds that there is a “reasonable suspicion” that a product was produced with forced labor…CBP [Customs and Border Patrol] then decides whether to issue a detention order to hold the goods at the port pending further investigation.… CBP rarely issues detention orders; the last one is from 2000.

Federal authorities could also issue a permanent exclusion order upon finding “probable cause” linking a certain product to forced labor. That provision has not applied in two decades, according to Gottwald.

Logistics aside, there’s a sad insularity to the idea of a ban, considering the socioeconomic context of the problem. The basic mechanism of enforcement ensures that intervention will only come at the end of the supply chain, after the labor has already been exploited. In supply chains that runs through dozens of factories or processors, slavery is the “accident” of malign neglect in a system rigged to obscure corporate liability and to distance consumers from labor.

A symbolic ban on “slave made” products does reflect a growing consciousness among the public and multinational corporations about human rights violations in their supply chains. Vivid media depictions of Bangladeshi children in sweatshops and migrant fishery workers trapped on the South China Sea has brought home the savage realities of globalization.

But without the empowerment of labor organizations or strong preventive regulations, symbolic gestures will not change the material conditions driving workers into positions of extreme vulnerability. Aside from reactive import bans, various programs have targeted forced labor more locally, and with spotty success. For example, organizations seeking to move children out of illicit work and place them in school are challenged by the structural forces of children’s basic economic necessity.

One analysis of child carpet-weavers in Nepal, showing the ineffectiveness of schooling-incentive programs, noted that “selection into hazardous child labor may be such that the most desperate participate. Subsistence concerns may lead to labor supply that is especially inelastic to changes in net returns to schooling.”

Inelastic. The seeming stubbornness of forced labor attests to capitalism’s vicious success. It is no coincidence, moreover, that the areas where forced labor and related violations are rife also happen to hot spots of aggressive economic liberalization, and in fact, the countries that used trafficked and coerced workers to produce lucrative agricultural goods, apparel, and other high-demand consumer exports have “healthy” trade relations with the United States, often facilitated by free-trade regimes (most recently codified in the hotly debated Trans-Pacific Partnership trade pact involving Pacific Rim countries).

Interventions focused on the most extreme violations produce feel-good kudos for nonprofit humanitarian enterprises in the short term, but not the wages families need to eat tomorrow. So while abhorrent forms of forced labor shock the conscience, they emanate less from rank cruelty than from the criminal poverty that the Global South economy makes flourish. But enslavement is not inherent to all economic markets, just as not all industries are inherently exploitative. The task is shaping a modern economy that is harmonized with evolving concepts of social progress. Erasing offensive legislation opens room for debate—and invites both state and society to articulate a different set of values instead.