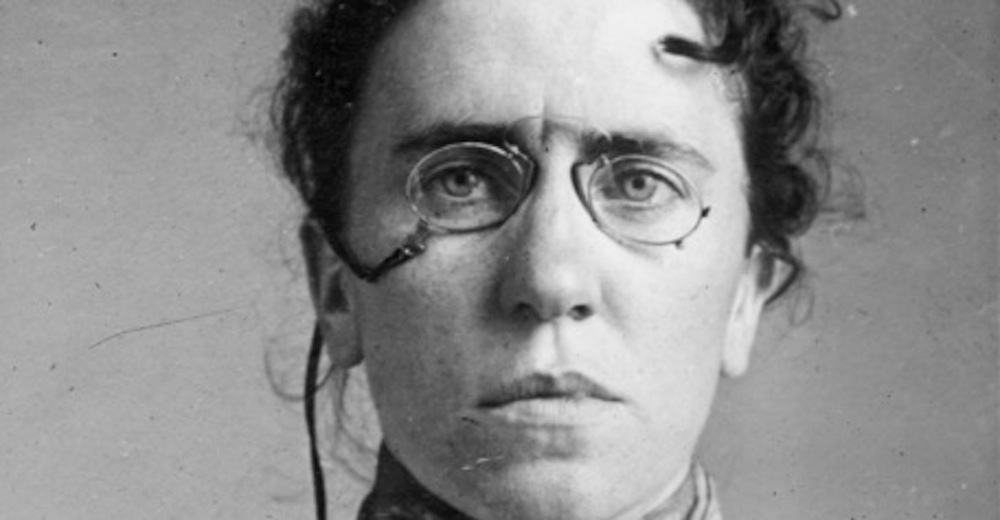 Emma Goldman in a mugshot from 1901, when she was implicated in the assassination of President McKinley. Photo via Wikimedia Commons.

On this date in 1916 Emma Goldman was arrested for distributing information related to what her compatriot, Margaret Sanger, had called in the title of a pamphlet Family Limitation. She was imprisoned for two weeks. Less than a year earlier, The Nation had profiled her in an ongoing series called “Notes from the Capital” (June 28, 1917). Goldman would later be deported to Russia on the charge of inciting people to avoid the draft for the World War, but she quickly grew disillusioned with the Bolshevik regime. Later, in the early 1930s, Goldman became a Nation contributor herself.

Recent events in Petrograd and Kronstadt must have brought rare comfort to the soul of Emma Goldman, prophetess of anarchy—the real article, warranted one hundred per cent, pure, name stamped on every package…. In the United States, whither she came with relatives as a young woman, she first emerged from obscurity in 1893, when she was arrested on a charge of inciting to riot by a speech made at a gathering of habitual miscontents in Union Square, New York….

The trial served to bring out in a most illuminating way her vagaries on various subjects, including the facts that she was an atheist and a disbeliever in all government and law, divine or human; that her pet hobby was that the rich are the oppressors of the poor and the ultimate cause of all the suffering and crime in the world, against which the poor are justified in revolting…and that her mission in life was to make the poor understand that the well-to-do are accountable for their poverty, and thus to promote the social revolution….

Most newspaper readers are so accustomed to thinking of Emma Goldman as simply a human firebrand that it is hard to make them realize that by calling she is a dress-maker and a trained nurse. She is a small, wiry woman, about fifty years old, who might be passed anywhere in a crowd without notice. Her sharp black eyes, intense expression, and rather coarse mouth have nothing distinctive about them at the first glance, though they become more significant with familiarity, and her eyeglasses, framed in part by sharply marked brows, give her an air of active mentality which is lacking in some others of her general type. Her face is too symmetrical to be classed as that of a natural “crank,” but you have only to talk with her for five minutes in order to discover how strong an appeal the theatrical side of social chaos makes to her. Smiles she reserves mostly for sneering purposes.