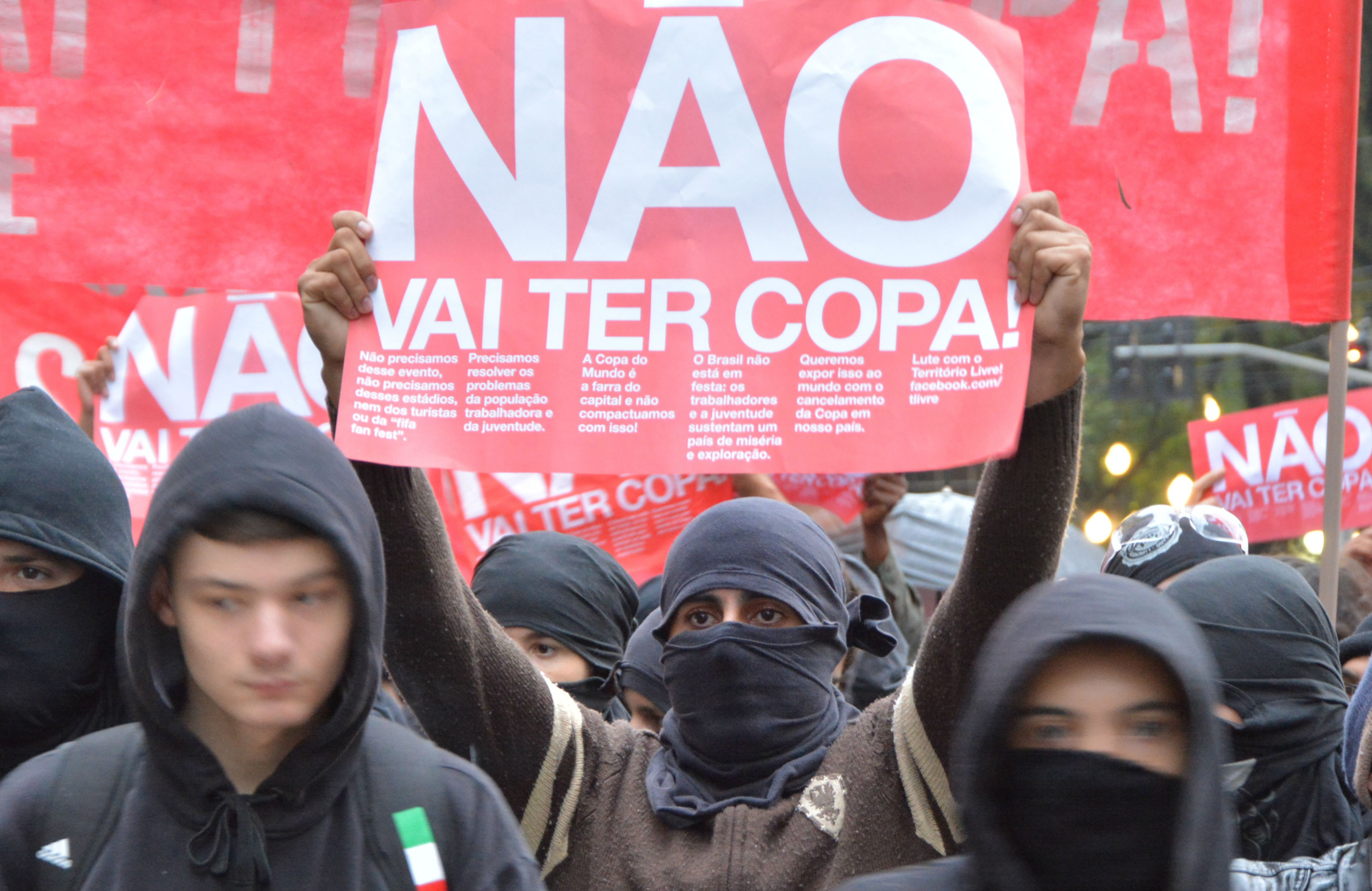 When I was in Brazil for those first days of the World Cup, I was—with many other journalists—tear gassed by military police. I saw sleek, urban-outfitted tanks in the streets and I felt concussion grenades send subsonic shrapnel crashing into my eardrums. I didn’t see the drones flying overhead, but then again, no one without a Hubble telescope is supposed to see the drones.

I also saw militarism that was less high-tech, and more of the traditional boots-on-the-ground variety. Several of the favelas—precarious communities of the poor that were once sanctuaries for both outlaws and revolutionaries—are under full-scale occupation. This has sparked protests by favela residents against the violence of living under constant police subjugation

The level of high-tech hardware on display is hardly different from what we have seen at previous World Cups and Olympic games. Gunships and missile launchers have over the last dozen years become as much a part of the scenery as the FIFA Fan Park and Olympic Village. The problem, though, is not really how the media has yawned past these kinds of post 9/11 security imperatives (although this is a problem). It’s the way that in too many host countries the militarization does not go away when the mega-events end. Instead, it becomes the new reality. If you buy a drone you are not, as a security official in London told me in 2012, “going to just put it back in the box.” Surveillance culture becomes normalized, and through the Trojan horse of sports, a fresh Orwellian reality is born.

Brazil’s leaders are unashamed of this overwhelming show of force. The state has expressed grave concern, at different times, about protesters, crime and terrorism. Tragically, if not predictably, they have also chosen to see protest as an act of crime and even an act of terrorism unto itself. I witnessed this repeatedly, with the effect of turning the World Cup host into, as one activist said to me, “a facsimile of the old dictatorship.”

Concern about protesters, crime and terrorism have all undoubtedly played a role in the security buildup, but Brazil has also built up its armed forces dramatically in recent years as a way to show the world that its new global economic might would be matched militarily. Yet the presence of such overpowering—not to mention high tech—weaponry raises a critical question: Who is arming Brazil? Who supplies—and profits—from their new normal?

The answer is found in Haifa, Israel, at two different multibillion-dollar weapons and electronics manufacturers: Rafael Advanced Defense Systems and Elbit Systems. Rafael is a for-profit company owned by the Israeli state, while Elbit is a private corporation. Elbit’s earnings are up dramatically, with its drone airplanes providing crowd surveillance during the World Cup. As Chief Executive Officer Bezhalel Machlis said in an interview with Bloomberg, “The intelligence-gathering electronic and optics technologies of Elbit and our Brazilian partners are perfectly suited for the homeland security challenges at these events.” The providing of high-tech militarism caused their second-quarter net income to “rise 30 percent to $50 million.” Bloomberg News wrote antiseptically that Brazil’s desire to increase purchases of Elbit’s weaponry was “given fresh impetus after the Confederations Cup soccer tournament in June [2013] prompted record numbers of people to take to the streets in protest at a range of issues including spending on state-of-the-art stadiums.”

As for Rafael, it was founded in 1948 by the newly established state of Israel to arm the country against those who once resided in its territory. Rafael has an even stronger foothold in Brazil than Elbit. As Flavie Halais, writing for Open Democracy reported last year, “Rafael Advanced Defense Systems has bought a 40 percent stake in Brazilian GESPI Aeronautics. Back in 2010, Brazil and Israel signed a security cooperation agreement, with news reports stating the agreement dealt specifically with the World Cup and Olympics. Since then, officials from both countries have met to develop partnerships for mega-events and Israeli security experts have given several conferences and workshops for Brazilian officials and members of the Municipal Guard.”

This flow of arms from Israel to Brazil has sparked a movement in Brazil led by the Frente em Defesa do Povo Palestino–SP (Front in Defense of the Palestinian People–São Paulo), which is composed of dozens of Brazil’s civil society organizations and unions, and is a part of the Boycott, Divestment and Sanctions movement. Last year they protested at the Latin American Aerospace and Defense fair in Rio attended by arms manufacturers from around the world all competing—with the help of scantily clad models—to arm Brazil for the World Cup and the Olympics. The event was seen as a triumph for the thirty Israeli arms manufacturers who were, according to an insider,given special access to Brazilian Vice President Michel Temer and Secretary of Defense Celso Amorim.

“What Rafael, Elbit and Global Shield are doing is exporting the very tactics used on the Gaza Strip,” said one activist to me in Rio. “They are taking neighborhoods of poverty and anger and creating Gaza in the favelas of Brazil. The goal of anyone who sees themselves as a part of civil society should not be more Gazas.” From even the most basic humanitarian perspective, this is unassailable, particularly given the events of this week, as collective punishment, bombings and demolitions, have been the state response to the discovery of three dead Israeli teenagers in the West Bank. We should be figuring out how to demilitarize Gaza so the 1.8 million people who call that strip of land home have freedom of movement and opportunity without the constant specter of military incursion. Exporting the “Gaza security model” to the cities of the future is a recipe for dystopia. Using the World Cup—and our collective love of soccer—to create that new normal is both frightening and enraging. This sport, created and nurtured by the poor across the world, is now being played in exclusion zones under the watchful eyes of drones in the skies and boots on the ground. We may be rejoicing in the beautiful game right now, but we also need to fight to reclaim it.