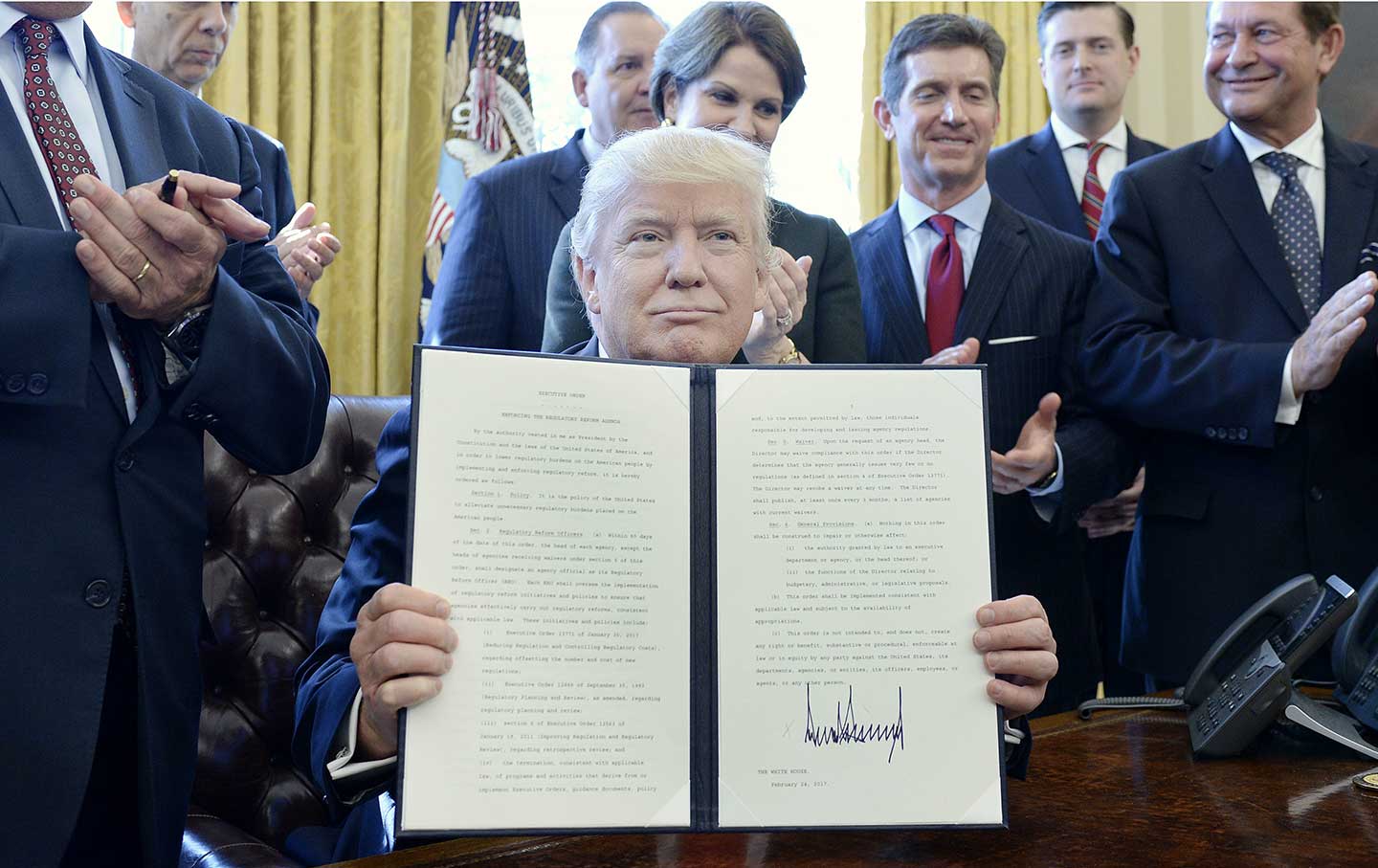 Donald Trump is still laying the groundwork for the next four years, as he continues to fill key administration slots and rescind Obama-era rules. Here is what he did this week, which will have huge implications for transgender Americans, immigrants, and the regulatory state as Trump’s term unfolds.

Withdrew federal protections for transgender students. As a presidential candidate, Trump promised to protect gay, lesbian, bisexual, and transgender Americans from discrimination. But on Wednesday his administration rescinded a directive issued under President Obama that required schools to allow students to use whichever bathroom they chose. That directive, the Justice and Education Departments wrote, was issued “without due regard for the primary role of the states and local school districts in establishing educational policy.” The administration’s move raises the stakes of a case, brought by 17-year-old Gavin Grimm, soon to be heard by the Supreme Court.

Appointed a new national-security adviser. Lt. Gen. H.R. McMaster, Trump’s pick to replace Michael Flynn, is a military strategist and a veteran of the Persian Gulf war and the second Iraq War. According to the The New York Times, McMaster is considering making changes to the National Security Council, which was reorganized last month to elevate Trump adviser Steve Bannon to a top position on the council.

Released an implementation plan for immigration enforcement. On Tuesday, the Department of Homeland Security released two memos calling for a huge increase in the number of immigration agents; the deputizing of local law enforcement agencies to enforce immigration laws; and expanded use of “expedited removals,” a deportation procedure that skirts the court system. As Julianne Hing writes, the memos make it clear that “the United States is undertaking an aggressive deportation agenda targeting nearly every person who is or is suspected of being undocumented.”

Signaled support for private prisons. On Thursday, Attorney General Jeff Sessions withdrew Obama-era guidance to reduce the use of private prisons. Sessions’s order “directs the Bureau of Prisons to return to its previous approach to the use of private prisons,” according to a DOJ spokesman. It’s not clear how much difference the Obama-era guidance was really making, but Sessions sent a powerful signal, David Dayen wrote, and one that’s likely to boost a corporation with which he has close ties.

Asked the FBI to dispel stories about Russian connections. The administration acknowledged that White House Chief of Staff Reince Preibus asked the Federal Bureau of Investigations to push back on reporting over communications between Russian officials and Trump campaign staff last year. John Dean, White House counsel to Richard Nixon, tweeted, “I have expertise on this matter. Push back on an FBI investigation of the White House is better known as a COVER UP.”

Staffed economic team with right-wing ideologues. Trump made a critical appointment Friday, naming Kevin Hassett as chair of his Council of Economic Advisers. Much like climate-change deniers, Hassett could be considered a denier of income inequality. (Though Paul Krugman tweeted, “friends have been urging me to got easy on Hassett, saying that Trump could well have done much worse. And they’re right. Sad!”) Trump also appointed James Sherk to advise him on labor and employment issues. (This actually happened several weeks ago, but wasn’t announced at the time.) Sherk opposes increases to the minimum wage and expanded union power.

Another vague executive order on regulatory “reform.” After his speech at CPAC, Trump signed an order on “government-wide regulatory reform.” The order doesn’t appear to do much beyond creating task forces to “evaluate existing regulations and identify candidates for repeal or modification.” But it’s another signal that Trump aims to dismantle the regulatory state, as his top adviser, Steve Bannon, essentially said at CPAC on Thursday.