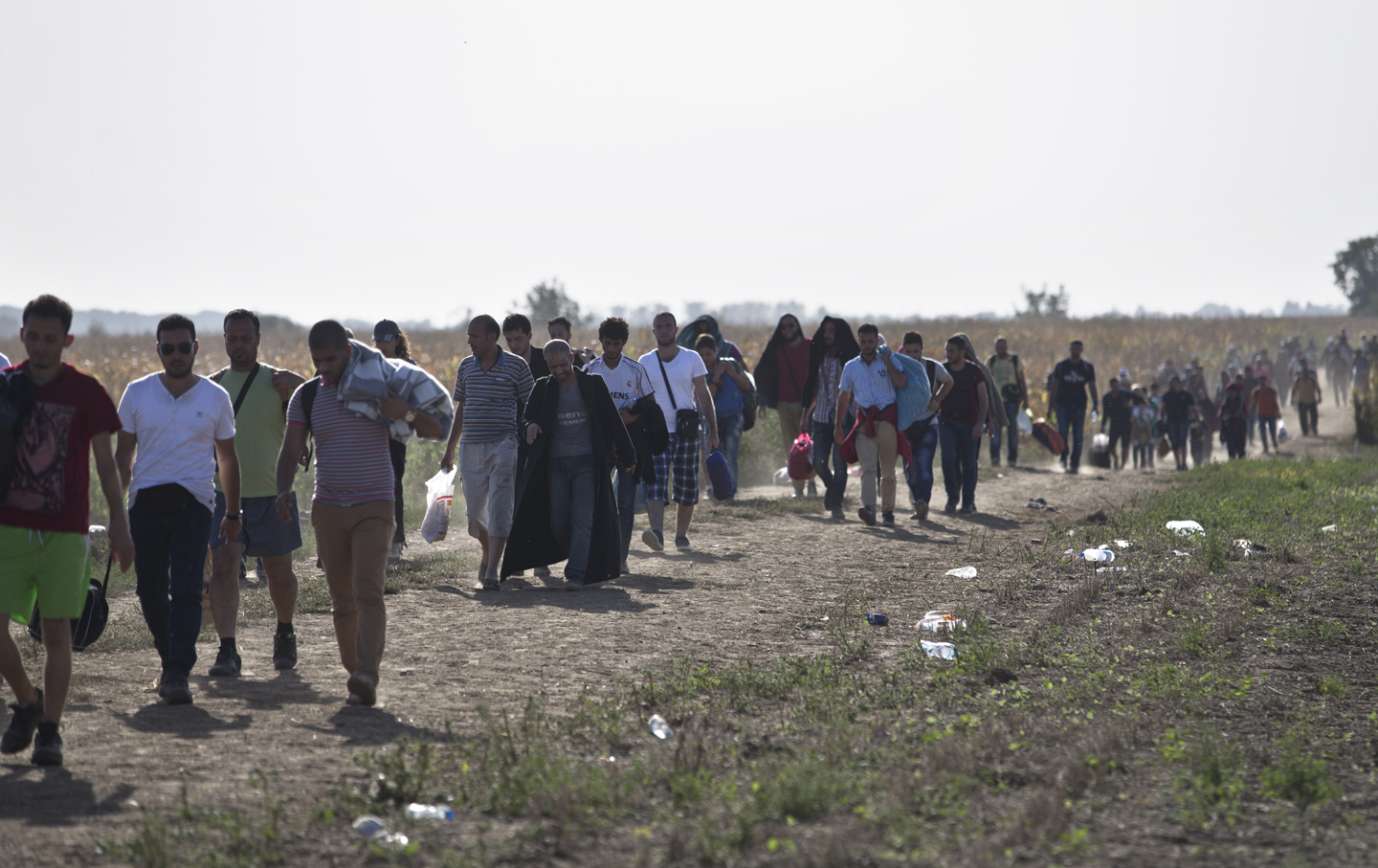 This week, Hungary attempted to seal off its border to throngs of desperate refugees with a crudely constructed wire fence. A flimsy prison gate cordoning off Fortress Europe: There could be no clearer metaphor for the absurd small-mindedness of a political bloc that once prided itself on its humanitarian vision.

Families scrambled at the gates at the stroke of midnight. Security forces tried to push back crowds who had traversed continents and oceans, only to see their last hope for sanctuary dissolve in an acid hail of riot police and tear gas.

It’s not as if Europe has no experience with these obligations. Sixty years ago the continent was awash in refugees created by social upheaval and two world wars. But the 20th-century humanitarian regime has failed the refugees produced by today’s social calamities, leaving Europe unraveling at the seams.

Iverna McGowan, acting director of Amnesty International’s European Institutions Office, tells The Nation, “People should not be in a situation where they should have to leave everything they own and take deadly, perilous undignified journeys across water on unseaworthy boats, across land [while] facing this violence. They’ve already survived war. They should be provided safe and legal passage to protection.”

Although EU law enables freedom of movement generally within European borders, asylum seekers are bound by the Dublin Regulation, which typically forces people to seek asylum in the country they are first registered, with few exceptions. The system has led to wildly contradictory border policies, with Germany erratically trying to let more migrants in (though it recently instituted ad hoc border checks), and front-line states like Greece, Hungary and now Croatia trying haphazardly to contain or restrict border crossings.

On Tuesday, Hungary announced it would require migrants to be fingerprinted and screened, and that illegal entry would now carry a potential penalty of several years in prison. The government also devised what appears to be a kangaroo asylum court, milling migrants through 20-minute hearings (though many other asylum courts impose comparably draconian assembly-line justice.)

Ironically, the migrants are basically just as eager to pass through the border states as those governments are to push them out. Yet officials expend enormous resources to criminalize migrants, instead of simply letting them leave or enabling them to resettle and work.

“We are not here to take your jobs, or to behave badly. We know we are guests and we are grateful for your help...”

While traumatized families remain stranded at the edges of the continent, ministers in Brussels are gridlocked over an agreement to relocate just 120,000 migrants, without any long-term plan for resettlement or coordinated EU-wide immigration reform. More than 380,000 migrants have crossed EU borders this year.

Amnesty’s analysis notes the EU Council’s “relocation proposals more generally include no allowance for the will of the person who is being relocated. This raises serious concerns around potential detention and coercive measures… to force people to move to member states where they may have no family and limited integration prospects.”

Amnesty’s policy blueprint calls on EU member states to “offer at least 300,000 in resettlement and humanitarian admission places over the next two years.” Globally, to absorb the roughly 1.38 million refugee admissions and resettlements that will be needed, a coordinated international response will be critical, including the United States and Gulf nations. Amnesty also calls on governments to “provide more safe and legal routes for refugees to reach EU countries” and deliver more humanitarian aid directly to the most impacted regions of the Middle East, before refugees embark on perilous trafficking routes.

The failure to handle the current migrant influx marks the consequences of years of social policies that have left Europe less democratic, more politically and economically polarized, and cynically fearful of outsiders. The Greek financial crisis revealed the cannibalization of democracy by market forces; the migration crisis reveals the fallout of neoliberal trade and development schemes, along with militarism, beyond Europe’s borders.

While public attention fixes on the refugees fleeing warzones to the wealthiest bloc of nations, a darker, more revealing narrative of displacement is unfolding at the Port of Calais in France. There, many migrants from the Middle East, Africa and Asia languish in dilapidated shanties, desperate to cross into Britain. They receive markedly less political sympathy than Syrian refugees. They are often dismissed as mere “economic migrants”—supposedly coming for work, not asylum. Their institutionalized marginalization foreshadows where Europe’s migration crisis is heading.

As Amy Corcoran observes, while the Calais camp is becoming a quasi-society, with its own healthcare institutions and markets, the disturbing sense of alienation is starting to calcify: “Are we admitting that this is to be a permanent situation—a never-ending stream of people desperately escaping war and poverty forced to live on France’s northern shores in a forgotten and isolated ghetto, so close to the life they desire but just out of reach?” Calais’s itinerants are slowly “acknowledging that this may not be the temporary measure first anticipated—this might just be one’s new ‘life.’”

The false dichotomy between “economic migrants” and refugees fleeing war and persecution—proxies for “worthy” and “unworthy” outsiders—speaks to the moral bankruptcy rotting the core of the European project: the cruel triage of human desperation that divorces the issue of human rights from material needs. Inside and outside Europe, people are dislocated when political institutions separate questions of democracy from the crisis of social inequality.

And those who ignore senseless rules are always the ones who uphold the ideals their governments have abandoned—the waves of volunteers mobilizing direct aid, and the migrants themselves who maintain their dignity despite being stripped nearly everything else. As one migrant from Damascus wrote in The Guardian, after finally landing in Britain following six months of displacement, violence and impoverishment while crossing the Middle East and Europe: “We are not here to take your jobs, or to behave badly. We know we are guests and we are grateful for your help…. I just wanted to get somewhere I could live with a bit of dignity.”

At the checkpoint where refugees are transformed into trespassers, we see the real borderline emerge: the artificial wall that has historically excluded the Other from the right to a dignified existence. And this is the line that shows just how little truly separates “us” and “them.”