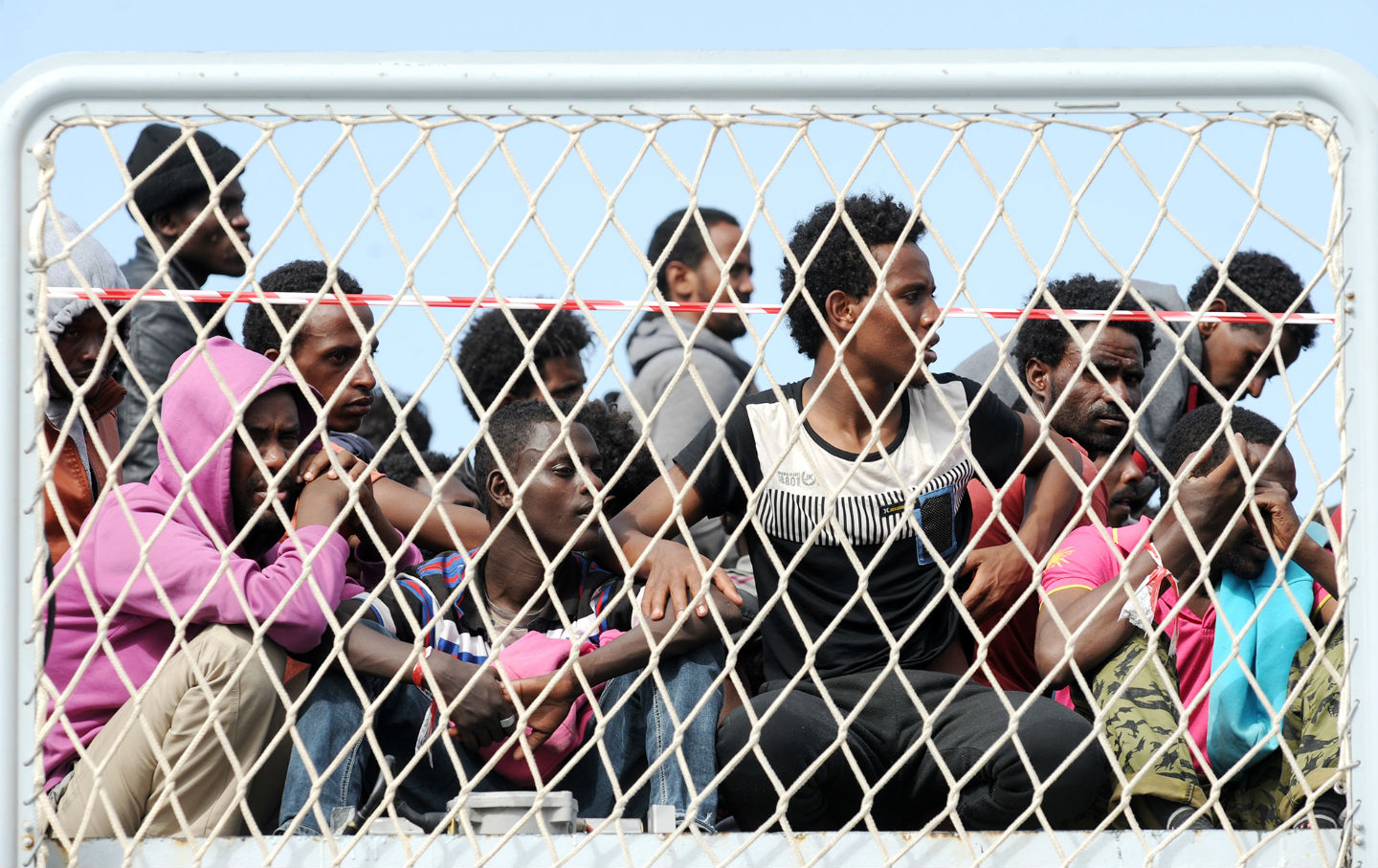 Migrants wait to disembark from an Italian Navy vessel in the harbor of Italy, Tuesday, May 5, 2015. (AP Photo/Francesco Pecoraro)

Just days after European Union ministers floated a proposal to rescue African migrants on the Mediterranean, the plan is already sinking amid a political impasse on the question of “sharing the burden” of the crisis. Meanwhile, thousands are facing death and torture on the perilous trail to Fortress Europe.

The proposed measures include expanding joint search-and-rescue patrols, establishing resettlement quotas, and sending military forces to Libya to keep migrants as far away as possible. But France, Spain, and the United Kingdom have rejected the idea of quotas for distributing migrants across member countries. The UK cites national sovereignty issues. Spain claims its high unemployment rate makes it unethical to accept migrants (though Italy, Greece, and Malta, which currently absorb the bulk of migrants, face similar or heavier social strains). Yet keeping borders sealed won’t truly deter anyone, because across the sea in Libya, there are no quotas, and no limit to the misery people endure as they seek refuge.

Drawing from recent testimonies of migrants from various African countries and within Libya, Amnesty International reports that the Mediterranean route is rife with “widespread abductions, torture, theft and physical assaults by criminal gangs and human smugglers.”

The smuggling trade across North Africa runs on a ferocious system of extortion. Many migrants are held hostage by criminal gangs or smugglers, who terrorize and demand thousands of dollars in ransom from their families back home. Migrants are sometimes “exploited and often held effectively as slaves—forced to work without pay, physically assaulted and robbed.”

Some migrants had been long-term residents of Libya but were displaced by the ongoing civil conflict following the fall of the Gaddafi regime. African migrant workers have suffered especially severe abuse, fueled by an explosion of underlying racism and xenophobia, along with a lack of migrants’ legal rights.

Christian migrants reportedly face “abductions, torture, theft and physical assaults by criminal gangs and people smugglers, in addition to abuses perpetrated by armed groups such as IS and Ansar al-Shari’a.”

Many other “third party nationals” are trafficked through Libya from Somalia, Sudan, Eritrea and Ethiopia, or from West Africa via Niger or Algeria. They are shunted into makeshift encampments in private houses, then routinely subjected to rape, forced labor or physical assault. Mohamed, a Somali refugee, recalled the ransom process: “In the desert, Libyan men were forcing, torturing us, beating us with swords, guns, stones, Kalashnikovs. … I stayed one month, then paid. My mother’s brother is in Holland; he paid.”

A 30-year-old Nigerian migrant, driven from Tripoli to the coastal city of Zuwara in 2014, stated:

They would come steal our money and flog us. As a black man, I cannot go to complain to the police. I went to complain at the police station twice but they did not believe me. … They call us slaves. I am a Christian and that’s why the men would always come to our house and attack us.

These horrors imposed by criminal forces are rivaled by the desperate conditions at official detention centers, which Libyan authorities have largely neglected in recent months and left without adequate food or medicine supplies. One former detainee recalled:

There were women from Tunisia, Gambia, Ghana, Cameroon, Somalia and Nigeria. They used to beat us with pipes on the back of our thighs; they were even beating the pregnant women. At night, they would come to our rooms and tried to sleep with us. … During the day, they would force us to come out of our rooms to clean or cook. They used to touch our breasts when we were working. They would beat us if we dared to shout.

And those who manage to survive these abuses may still face a high risk of dying on a capsized fishing boat. And now yet another kind of brutality may await them on the coastline. Reflecting xenophobia roiling in their countries’ domestic politics, European officials are now considering military strikes to destroy smuggling vessels before they leave Libya. Activists and the Italian coastguard warn that the last thing refugees need is more bombing—especially not from the same countries that refugees would presumably want to petition for asylum.

According to Amnesty’s Libya researcher Magda Mughrabi, due to instability and the tightening of the borders in neighboring Egypt, Algeria, and Tunisia, “focusing only on smugglers…could potentially lead to thousands of people being trapped in Libya without any means of escaping conflict and serious human-rights abuses.”

Amnesty International has called on the collapsed Libyan government to address these conditions by releasing people unjustly imprisoned and providing for detainees’ basic needs. Mughrabi also stresses that neighboring countries should keep their land borders open to “anyone fleeing persecution regardless of their nationality, regardless of whether or not they have travel documents.” More importantly, human-rights activists demand that the EU match the efforts of those (much poorer) countries with a comprehensive plan to accommodate refugees and migrants, including “resettlement places, humanitarian admissions and visas for people in need of international protection and [to] ensure that refugees have effective access to asylum at land borders,” so people do not have to resort to the trafficking routes. Instead of attacking the Libyan coast, border authorities should expand its severely underfunded search-and-rescue missions, which the EU cut last year in hopes that the prospect of mass death would deter them.

It hasn’t, because too many migrants know they’ll face death wherever they turn—so they keep moving forward.

The outcry over migrant deaths at sea reflects human-rights concerns that European governments are usually on the other side of. But the global inequality and instability that Europe helped instigate in the Global South couldn’t stay contained forever. Much of the Libyan crisis can actually be traced back to the 2011 military strikes that NATO claimed would give rise to a new democracy. Instead, it gave rise to a new humanitarian catastrophe.

“The international community, especially the nations that took part in the NATO intervention…do have a responsibility towards addressing the situation in Libya [and accepting] the refugees and asylum seekers that this conflict has produced,” Mughrabi says.