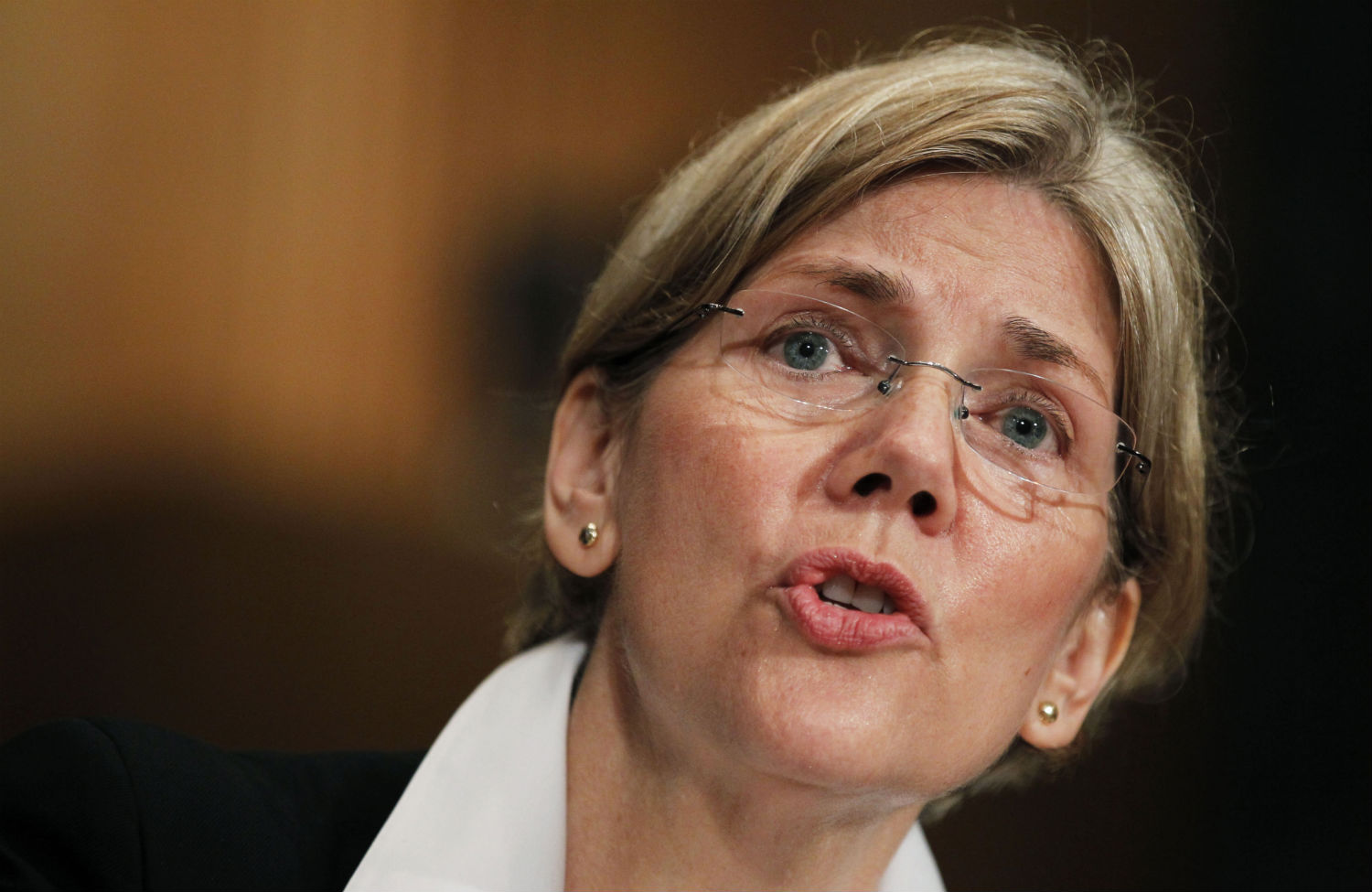 The measures of books written by politicians are never simply literary.

Books written by the women and men who might, maybe, just possibly run for president are invariably judged by electoral standards.

So it is that Massachusetts Senator Elizabeth Warren’s fine new book, A Fighting Chance, will be assessed both for its composition and for its potential to spark the popular uprising that might make a reasonably populist Democrat a contender for the presidency, the vice presidency or a top cabinet post in a next administration.

Warren says she is not running for president in the 2016 Democratic nomination contest that too many pundits have already decided will be won by former Secretary of State Hillary Clinton—just as they had already decided the 2008 nomination fight for Clinton. Warren’s statements have been consistent in that regard. On the CBS Sunday Morning program this week, she was pressed repeatedly on the issue. “I’m not running for president,” Warren reiterated, cutting her interviewer off with a warning that “you can ask it lots of different ways” and still get the same answer.

Warren has a reputation as a straight shooter. But even straight shooters have been known to resist entreaties to seek the presidency, or to accept an invitation to join a national ticket, right up to the point at which they hear the siren call.

Candidates and potential candidates write books for two reasons. At their worst, they seek merely to advance their own ambitions. At their best, they seek to frame the debate—not necessarily with a precise platform; often with an ably developed premise, as was the case with the two best-selling books that a young Barack Obama wrote before launching a presidential bid that in its early stages was grounded at least in part on a stack of favorable reviews.

But reviews, and even sales, do not necessarily translate into votes. The finest “idea” book written by a political figure who was angling for a presidential run, Wendell Willkie’s 1943 text One World, got him precisely nowhere in his 1944 run for the Republican nod. Folks showed up at Willkie events seeking autographs on their copies of the enormously popular book and then voted for Tom Dewey or Franklin Roosevelt.

It was different with John Kennedy’s Profiles in Courage, the Pulitzer Prize–winning 1957 book that positioned a very young Massachusetts senator as both an intellectual and as something of a bipartisan prospect for the presidency. And his impressive collection of foreign policy observations, 1960’s Strategy for Peace, helped Americans to imagine how the Democratic nominee would chart a course through Cold War politics. The first book was critical to getting Kennedy into the 1960 race as a serious contender, the second provided him with foreign-policy credibility for a contest with Vice President Richard Nixon.

Warren’s text is a relatively standard political book, as least in comparison with those by Willkie, Kennedy and Obama. But it strikes the right ideological tone for a moment in which Warren’s long-term issues—income inequality, middle-class misery, Wall Street excess and accountability—have finally gotten notice from a traditionally neglectful media, and from a Democratic Party that is in need of a new playbook.

It is with all of these understandings that the professor-turned-senator’s tenth book enters the long list of political tomes that will be read not only for their ideological insights but for hints about practical politics.

Let’s begin by stipulating that, apart from any political calculus, Warren has written a good book. It’s appropriately biographical, relatively frank and quite strong with regard to the pathologies of our politics and our economics. The book is at its best when it explores those pathologies, as when Warren recounts her effort to establish and lead what would become the Consumer Financial Protection Bureau.

Recalling a meeting with Congressman Michael Grimm, R-NY, she writes: “When I launched into an enthusiastic description of what we were trying to get done at the agency, the congressman looked surprised. After a bit, he cut me off so he could make one thing clear: He didn’t believe in government.” Warren wryly observes that Grimm believed in a lot of government—including the Federal Bureau of Investigation, for which he worked before embarking on a political career, and the “government-paid health insurance [he got] when he joined Congress”—“but not other forms of ‘big government’ and certainly not a consumer protection agency.”

Warren’s book is tougher on Republicans than Democrats, despite the fact that Democrats were responsible for many policies and approaches she opposed as a crusading Harvard Law School professor and ally of the late Senator Paul Wellstone. She generally goes easy on the Clintons and is gentle with Barack Obama—though she does do some damage to Larry Summers, whose Diet Coke–drenched seminar on how to be an insider Warren recounts to devastating effect.

The senator seems most comfortable in the realm of ideas and debate, especially when she goes after those who would have the government stand down as a regulator and enforcer of the rules.

“We can’t bury our heads in the sand and pretend that if ‘big government’ disappears, so will society’s toughest problems,” she writes. “That’s just magical thinking—and it’s also dangerous thinking. Our problems are getting bigger by the day and we need to develop some hardheaded, realistic responses. Instead of trying to starve the government or drown it in the bathtub, we need to tackle our problems head-on, and that will require better government.”

With knowing references to right-wing dogma, those lines are being read as a shot at Tea Partisans such as Ted Cruz and sort-of-libertarians like Rand Paul. But Warren goes a good deal deeper, pressing the point that government is needed. It’s a personal message, rooted in her experience as a girl growing up in a working-class Oklahoma family.

The biographical sections of the book are the most poignant, especially as the senator recalls her mother, shaken after Warren’s father suffered a heart attack and afraid about losing the family home, pulling on a best dress and heading out to take a low-wage job. Warren makes the right connections, arguing in conversations about this story that, “we came right to the edge of losing our home. My mother saved our home with a minimum wage job. But in the 1960s, a minimum wage job would support a family of three above the poverty line. Not today. Not even close.”

The reasons why it is “not even close” are highlighted throughout Warren’s book, in which one chapter is titled “Bailing Out the Wrong People.” But the real heart of the matter was summed up in the working title of this book, Rigged—“It refers to how the economic system’s too often rigged against families who work hard and play by the rules—and how it’s loaded in favor of those with money and power,” she told an interviewer last year.

Book titles change for a lot of reasons.

But no one should miss the point of the title change for this book. Warren and her publisher decided that Americans don’t need another bummer book about a broken economy. They need some hope that a rigged system can be fixed so that it doesn’t always favor “those with money and power.”

A knowing optimism is better for book sales.

It is, as well, better for presidential bids.

There is little reason to disbelieve Elizabeth Warren when she says that “right now” she is focused on electing populist Democrats like Iowa’s Bruce Braley and South Dakota’s Tim Weiland to the US Senate, and on keeping that chamber in Democratic hands. But should Democrats find themselves casting about for a populist in 2016—either because a front-runner stands down or because economic justice issues take precedence—there is good reason to believe that they might be drawn to a potential candidate whose book announces, “I’m here to fight for something that I believe is worth absolutely everything: to give each one of our kids a fighting chance to build a future full of promise and discovery.”

Editor’s Note: Click below to listen to Elizabeth Warren read from the prologue to the audiobook version of A Fighting Chance.