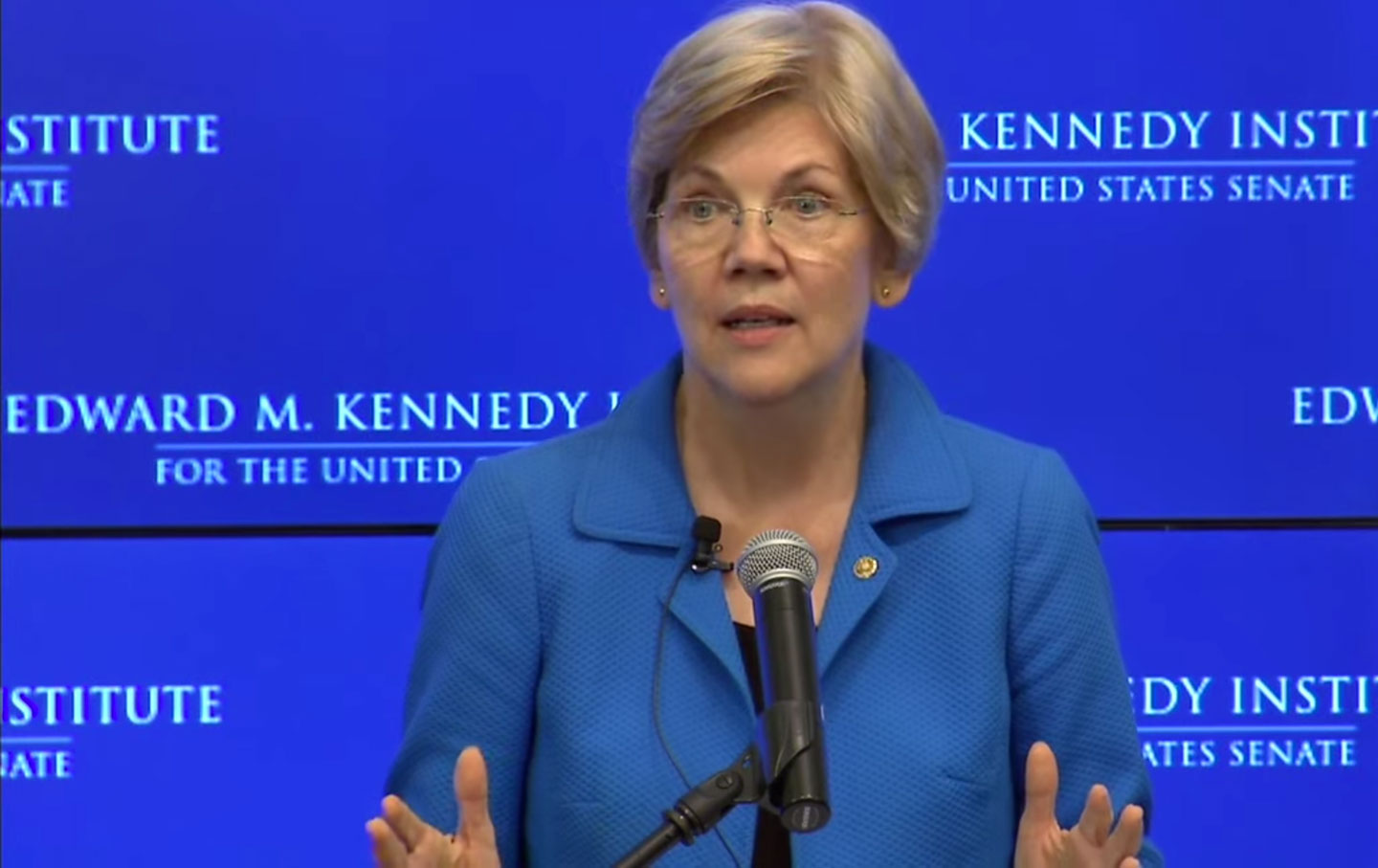 Elizabeth Warren is not the leader of the Democratic Party in any formal sense. She is not the 2016 presidential nominee, nor even a contender for the spot—at least for now. She is not the head of the party’s caucus in the Senate. She does not even chair a key committee.

Yet, she is setting the course for the party as it approaches the 2016 election. She is focusing its agenda and exciting its base at a point when the question of leadership is a critical one for Democrats who are in the process of selecting a nominee, choosing new congressional leaders and framing an agenda for post-Obama era.

That was evidence over the weekend as she delivered a striking speech on racial justice and hit the campaign trail for an old ally who hopes to join “the Elizabeth Warren caucus” in the next Senate.

The speech on racial justice was presented as a part of the Edward M. Kennedy Institute for the United States Senate’s “Getting to the Point” series. And Warren did, indeed, get to the point.

“Economic justice is not—and has never been—sufficient to ensure racial justice,” declared Warren, as she addressed the accomplishments of the civil-rights struggle of the 1960s, of how her predecessor, Massachusetts Senator Ted Kennedy, embraced that struggle, and of how she sees the work that is yet to be done. “Owning a home won’t stop someone from burning a cross on the front lawn. Admission to a school won’t prevent a beating on the sidewalk outside.”

Like Vermont Senator Bernie Sanders, who has spoken on the presidential campaign trail of parallel struggles for racial and economic justice, Warren noted that the Rev. Dr. Martin Luther King Jr. wrote of the “the inseparable twin of racial injustice was economic injustice” and marched in 1963 for “jobs and freedom.”

Warren argued that the great strength of the civil-rights movement and the legislation that extended from it was an awareness that the need to struggle on many fronts: “In the same way that the tools of oppression were woven together, a package of civil-rights laws came together to protect black people from violence, to ensure access to the ballot box, and to build economic opportunity. Or to say it another way, these laws made three powerful declarations: Black lives matter. Black citizens matter. Black families matter.”

Unfortunately, she explained, the need to struggles has not passed, explained Warren, who said:

Fifty years later, we have made real progress toward creating the conditions of freedom—but we have not made ENOUGH progress.

Fifty years later, violence against African Americans has not disappeared. Consider law enforcement. The vast majority of police officers sign up so they can protect their communities. They are part of an honorable profession that takes risks every day to keep us safe. We know that. But we also know—and say—the names of those whose lives have been treated with callous indifference. Sandra Bland. Freddie Gray. Michael Brown. We’ve seen sickening videos of unarmed, black Americans cut down by bullets, choked to death while gasping for air—their lives ended by those who are sworn to protect them. Peaceful, unarmed protesters have been beaten. Journalists have been jailed. And, in some cities, white vigilantes with weapons freely walk the streets. And it’s not just about law enforcement either. Just look to the terrorism this summer at Emanuel AME Church. We must be honest: Fifty years after John Kennedy and Martin Luther King, Jr. spoke out, violence against African Americans has not disappeared.

And what about voting rights? Two years ago, five conservative justices on the Supreme Court gutted the Voting Rights Act, opening the floodgates ever wider for measures designed to suppress minority voting. Today, the specific tools of oppression have changed-voter ID laws, racial gerrymandering, and mass disfranchisement through a criminal justice system that disproportionately incarcerates black citizens. The tools have changed, but black voters are still deliberately cut out of the political process.

Violence. Voting. And what about economic injustice? Research shows that the legal changes in the civil rights era created new employment and housing opportunities. In the 1960s and the 1970s, African-American men and women began to close the wage gap with white workers, giving millions of black families hope that they might build real wealth.

But then, Republicans’ trickle-down economic theory arrived. Just as this country was taking the first steps toward economic justice, the Republicans pushed a theory that meant helping the richest people and the most powerful corporations get richer and more powerful. I’ll just do one statistic on this: From 1980 to 2012, GDP continued to rise, but how much of the income growth went to the 90% of America—everyone outside the top 10%—black, white, Latino? None. Zero. Nothing. 100% of all the new income produced in this country over the past 30 years has gone to the top ten percent.

Today, 90 percent of Americans see no real wage growth. For African-Americans, who were so far behind earlier in the 20th Century, this means that since the 1980s they have been hit particularly hard. In January of this year, African-American unemployment was 10.3 percent—more than twice the rate of white unemployment. And, after beginning to make progress during the civil rights era to close the wealth gap between black and white families, in the 1980s the wealth gap exploded, so that from 1984 to 2009, the wealth gap between black and white families tripled.

The former Harvard professor identified the challenges, and then she got specific. As Sanders has begun to do on the presidential campaign trail, Warren outlined policing reforms that are needed and argued that the police “are not occupying armies. This is America, not a war zone—and policing practices in all cities—not just some—need to reflect that.” She outlined strategies for defending voting rights. And she detailed plans “to come down hard on predatory practices that allow financial institutions to systematically strip wealth out of communities of color.”

Perhaps most importantly, Warren urged her party and America to “Listen to the brave, powerful voices of today’s new generation of civil rights leaders. Incredible voices. Listen to them say: ‘If I die in police custody, know that I did not commit suicide.’ Watch them march through the streets, ‘hands up don’t shoot’—not to incite a riot, but to fight for their lives. To fight for their lives.”

Warren’s speech is an essential statement for a party in search of itself. Others have touched on many of the same themes. But the senator is weaving them together, building bridges and making connections that the Democratic Party must make. She recognizes and embraces new demands, while integrating them with historical memory. In many senses, she has given the party its marching orders.

Yet Warren is not simply framing a fresh and focused political agenda.

She is putting it into practice, traveling the country—on a separate track from the presidential race, often with little notice—on behalf of Senate candidates who she believes will be essential players in the next Congress.

On Saturday, she was in Madison, Wisconsin, with former US senator Russ Feingold, with whom she worked almost two decades ago in fights against credit-card companies and banks. Feingold, who shares Warren’s economic populist vision and her deep commitment to racial justice (having aligned more than a decade ago with Michigan Congressman John Conyers to develop national legislation dealing with police profiling and practices), is running again for the Senate and weaving together issues in a way similar to the senator from Massachusetts. That’s given Feingold a leading position in most polls, but he faces a millionaire opponent (Republican incumbent Ron Johnson) with billionaire backers (such as brothers Charles and David Koch).

Warren fired up hundreds of young people on the University of Wisconsin campus with specific advocacy for student-debt relief, labor rights and economic and racial justice—as well as a broader call for a new politics that puts voters ahead of campaign donors.

“Ron Johnson believes that the Koch brothers are going to buy this race,” she declared. “He thinks that billionaires will decide who’s going to be the senator from Wisconsin. And all I can say is, we’ve got news for him. The people will decide who the senator from Wisconsin is gonna be, and that’s gonna be someone who won’t be there just for the millionaires, just for the billionaires, just for the big corporations. It will be someone who will stand up and fight for the people of Wisconsin, and that is Russ Feingold.”

For his part, Feingold says, he wants to be part of a new wave of senators—elected in 2016 from states across the country—“who can work with Elizabeth and Bernie Sanders and [Ohio Senator] Sherrod Brown, [Oregon Senator] Jeff Merkley and others. I think we have a chance to have one of the best combinations of progressive senators since the era we were just talking about—the progressive era.”

Warren is defining the agenda of that new progressive era: framing the debate, outlining a bold agenda, boosting that next wave of progressive senators. The Warren vision includes the economic-justice agenda with which she is closely associated. And it includes the equally vital component of a racial-justice agenda. Most importantly, it recognizes the necessity that those who would lead the Democratic Party must weave agendas together and again make “the powerful declarations: Black lives matter. Black citizens matter. Black families matter.”