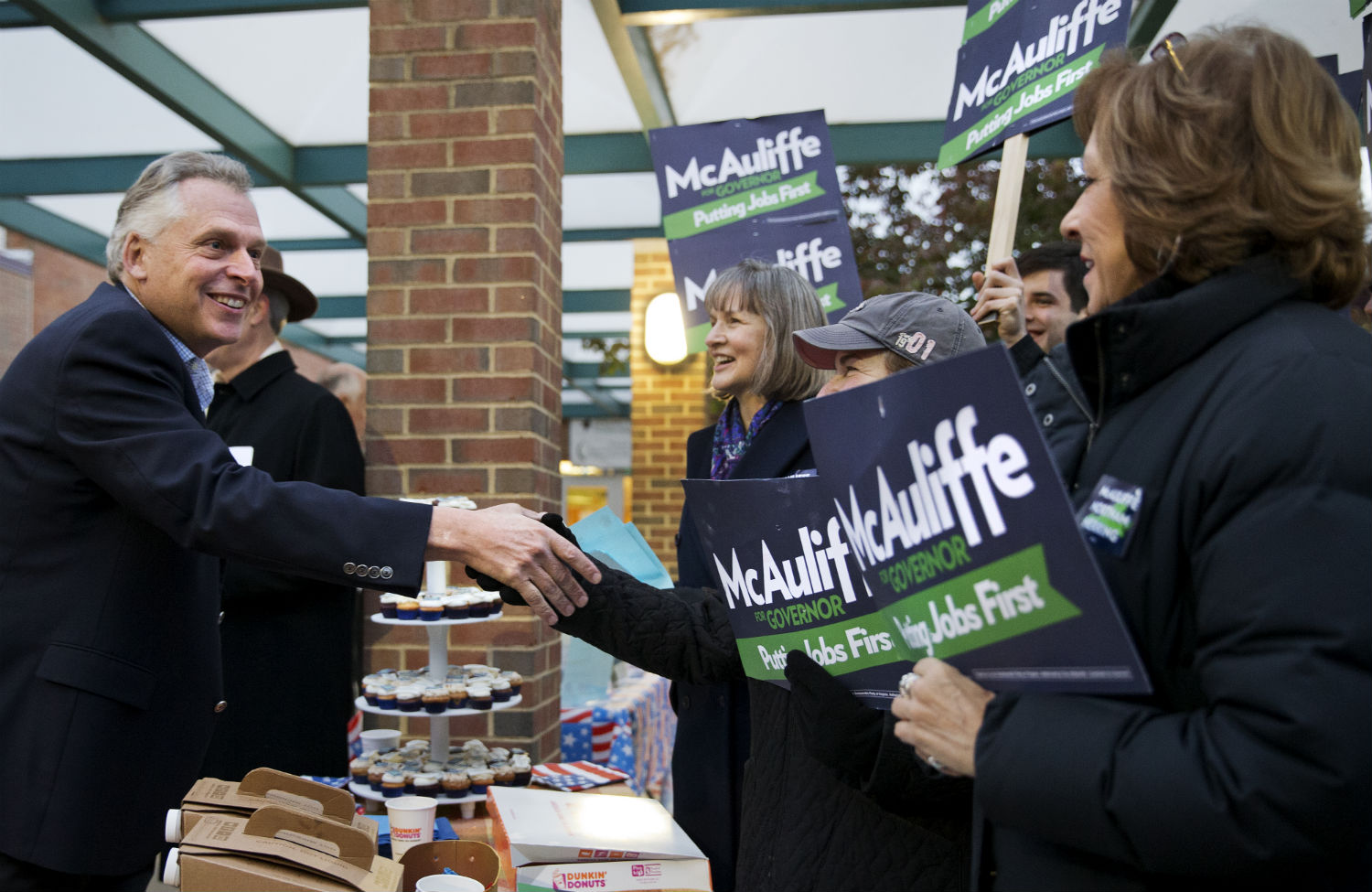 Two states will elect governors Tuesday, and one of those governors could emerge as a 2016 presidential contender. The nation’s largest city will elect a mayor, as will hundreds of other communities. A minimum-wage hike is on the ballot. So is marijuana legalization. So is the labeling of genetically-modified foods. And Seattle might elect a city council member who promises to open the fight for a $15-an-hour minimum wage.

Forget the silly dodge that says local and state elections don’t tell us anything. They provide measures of how national developments—like the federal government shutdown—are playing politically. They give us a sense of whether the “War on Women” is widening the gender gap. They tell us what issues are in play, and the extent to which the political debate is evolving.

Here are some signals to watch for as the results come in tonight:

Since the Republican Party became competitive in Virginia, no Democrat has ever been elected governor when a Democrat was in the White House. Indeed, the last Democratic president to see a Democrat take charge in the Old Dominion state was Lyndon Johnson.

So if Democrat Terry McAuliffe is elected Tuesday, there’s a message there—and it could tell us a lot about the evolving politics not just of Virginian, but of the United States as it heads toward the critical mid-term elections of 2014.

It has something to do with the extremism of Republicans at the state level when it comes to social issues. The Republican nominee for governor of Virginia, Attorney General Ken Cuccinelli, is pretty much the embodiment of the social conservatism that has the potential to create a permanent gender gap. But past Republican nominees in Virginia have been opposed to abortion rights and marriage equality. What made things even rougher for Cuccinelli was a mid-campaign government shutdown shocked and outraged Virginians—a lot of whom happen to be federal employees. President Obama made that point in a pre-election campaign swing on behalf of McAuliffe. “You’ve seen an extreme faction of the Republican Party that has shown again and again and again that they’re willing to hijack the entire party and the country and the economy and grind progress to an absolute halt if they don’t get 100 percent of what they want,” the president told Virginians. “You cannot afford to have a governor who is thinking the same way.”

If McAuliffe, a first-time candidate with plenty of baggage as a veteran campaign fund-raiser and fixer, wins big on Tuesday, the message Democrats will take away from the election is that Ted Cruz and the shutdown caucus have handed them a political hammer. And they will use it again and again and again in 2014.

The Republican governor of New Jersey has mounted a reelection campaign that reaches out not just to Republicans but to Democrats and independents. He’s even made nice with Barack Obama. Why? Not because he likes Obama. What Christie likes is winning—big. And he knows that a big enough win could make him a serious contender for the 2016 Republican presidential nomination.

But how big is big? A mid-October Quinnipiac survey gave the governor a thirty-three-point lead over Democrat Barbara Buono, and a Richard Stockton College survey from a week before the election had him up twenty-four points. Yet, despite a massive fund-raising advantage, despite all the advantages of incumbency, on the weekend before the election, a Fairleigh Dickinson University poll had Christie’s margin at nineteen points.

If Christie wins under 60 percent, he’ll have a hard time convincing the Republican base in states such as Iowa, New Hampshire and South Carolina—which does not trust him—that he’s their man. If he goes over 60 percent, he can start making his argument. And he will. But, even then, his cynical campaign in New Jersey will have to be taken into account. Christie has not run for reelection as who he is—a socially and economically conservative Republican. He’s run as an all-things-to-all-people incumbent, who has used a 6-1 money advantage to buy his margin. If it’s not that much of a margin, Christie will be stuck in the job he wants to get out of. And if Christie were to lose, well, then all bets are off—or on—for 2014.

3. Is This the End of Urban Republicanism?

Lhota was not running in a city where Republicans never win. He was running in a city where Republicans won the mayoralty in 1993, 1997, 2001 and 2003, and a Republican-turned-independent won in 2007. And while New York Republicans have always been different from Arkansas Republicans, there used to be room in the party for both camps. No more. The Republican Party has been moving to the right since the late 1970s, but that move accelerated after the election of Barack Obama in 2008. The new GOP is obsessed with right-wing ideological purity. And that comes through loud and clear—not just inside Republican caucus meetings but in communities that once elected Republicans.

If Lhota loses, as the polls suggest is likely, his defeat will come after a steady pattern of loses for Republicans in cities that once elected GOP mayors—from Los Angeles to Dallas to Houston to Cleveland to Toledo to Jacksonville to Phoenix—will be the latest indication that Republicans are no longer serious contenders in urban America.

“In the year 2000, Republican mayors governed half of the country’s dozen largest cities by population. Some of the party’s most provocative leaders had come out of city hall, including New York’s Giuliani, Los Angeles Mayor Richard Riordan and Indianapolis Mayor Stephen Goldsmith, the celebrated policy wonk and George W. Bush adviser,” explains Politico’s Alexander Burns. “Today, you have to go all the way down to Indianapolis—the country’s 13th-largest city—to find just one Republican mayor.”

It’s not just the conservative stances on issues such as marriage equality, and a host of other LGBT concerns. It’s also the opposition to infrastructure improvements and jobs programs, and the relentless assault on public education, social services and Food Stamps. The trouble with the GOP today is that, instead of focusing on the practical concerns of people who live in cities, Mesa, Arizona, Mayor Scott Smith says party leaders “put ideology above all.” Smith is the president of the U.S. Conference of Mayors. He’s also a Republican.

4. Are Voters Tired of Politicians who Pick on Unions?

When Wisconsin’s union-bashing Governor Scott Walker showed up to rally support for Jen Cuccinelli in Virginia, only 150 people turned out. In New Jersey, Governor Chris Christie forgot to invite Walker and instead sought private-sector union endorsements. In New York, labor-backed mayoral candidate Bill de Blasio told a closing rally in New York: “The reason we have become a middle-class nation is because of the labor movement. “

But the real test of labor’s renewed appeal will come in Boston.

Boston mayoral candidate Marty Walsh is a union man. And that does not sit well with much of media and political elites that have tried to suggest that a former union leader—as opposed to a corporate CEO—might bring biases to the job. In fact, Walsh brings strengths. He knows how to negotiate, he knows how to get a fair deal, and he actually think it’s important to respect workers.

But that hasn’t stopped his opponents—supporters of “school choice” experiments, corporate interests, traditionally Republican donors—from spending heavily to rip Walsh’s record as a labor activist, even going so far as to issue a video attacking the former head of the Boston Building Trades for rallying in solidarity with Wisconsin workers when Governor Scott Walker was attacking them in 2011.

Walsh was behind in the polls initially but he’s closed the gap as Bostonians have become aware of how his opponent, fellow Democrat John Connolly, has earned the backing of conservative Republicans. A recent Boston Globe headline read: “For Republicans, Connolly is the Democrat of choice. In Boston’s mayoral race, GOP donors shy from Walsh and his labor background.”

If Walsh wins as a proud union man, that victory will send a signal about the growing recognition on the part of voters that we need more leaders who are committed to protect the rights of working people, their unions, public services and public education.

5. Has the Time Come for Legalization of Marijuana? Or at Least Decriminalization?

Portland, Maine, will vote Tuesday on whether to become the first east-coast city to legalize marijuana. The test comes a year after Washington and Colorado voters approved the recreational use of marijuana by adults—and on the same day that Colorado takes the next step by considering whether to begin taxing pot sales.

In Brooklyn, the Democratic nominee for District Attorney, Kenneth Thompson, says that if he is elected he will no longer prosecute individuals arrested for possession of small amounts of marijuana. Thompson, who beat the incumbent DA in the September Democratic primary, has made decriminalization a major plank in his platform.

6. Doesn’t Everyone Deserve a Raise?

New Jersey voters will on Tuesday vote on whether to raise the state minimum wage by $1 dollar. Democratic legislators passed a bill to make the move earlier, but Chris Christie blocked it. So unions and the allies took the issue to the people. They are likely to win, proving a reminder that even if Christie does well, his policies do not.

States and cities across the country have embraced living-wage initiatives in recent years. But one of the most dynamic efforts comes in Seattle, where city council candidate Kshama Sawant promises that, if elected, she will push for a $15-an-hour minimum wage—along with a millionaire’s tax and an end to austerity cuts and assaults on public workers.

Last year, in California, massive spending—at least $46 million—by grocery manufacturing companies and their corporate allies beat back an initiative to label foods that have been genetically modified. The defeat for the proposal was a powerful reminder of how big money—in the early days of Citizens United and corporate personhood—can warp the debate. Now, a new test is coming in Washington state, where voters will decide Tuesday on Initiative 522, a plan to require groceries that have been genetically modified to carry labels.

More than thirty of the nation’s largest food manufacturers have poured money into various “No on 522” efforts. The corporations will spend at least $22 million, perhaps much more, to turn voters against what would otherwise be a popular proposal. The “Yes on 522” campaign has more than 13,000 small donors, but only a fraction of the cash.

This is how dollarocracy works—by seeking to “own” the debate with overwhelming spending. The question is whether democracy will prevail in Washington.