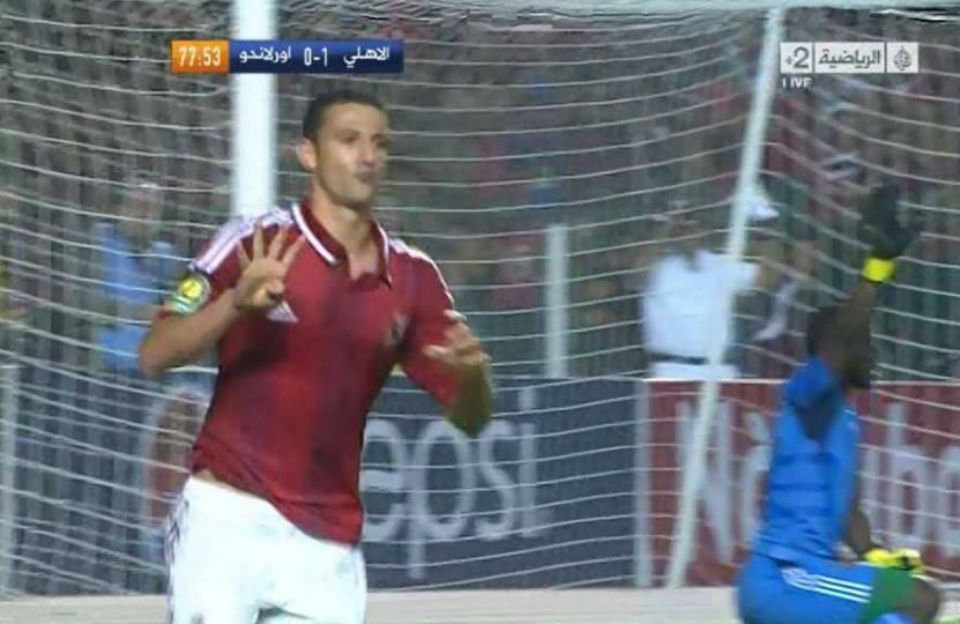 The New York Yankees of Egyptian soccer, Al Ahly, have officially expelled one of its top players, striker Ahmed Abdel Zaher. Did this extraordinary act take place in the aftermath of a heartbreaking loss? No, the team had actually just triumphed 2-0 and Zaher had even scored a goal. Was there an off-field scandal? Did Zaher find himself caught with steroids, or bullying teammates or running a dog-fighting ring? None of that. He was, by all accounts, a model citizen. Zaher’s crime was choosing to remember the massacred victims of Egypt’s dictatorship on the field of play, and in the Egypt of 2013, such an act will not go unpunished.

After Zaher scored in Ahly’s 2-0 win over South Africa’s Orlando Pirates in the African Champions League in Cairo on Sunday, he flashed four fingers while running back down the field. That simple gesture has changed his life, because flashing four fingers in today’s Egypt is a gesture as incendiary as raising a black gloved fist in 1968.

The Arabic word for “fourth” is Rabaa, and uttering the word “Rabaa”—like whispering the word “union” in nineteenth-century coal country—can get you in all kinds of trouble. It was just last August when hundreds of peaceful Egyptian supporters of ousted President Mohammed Morsi were killed by security forces at the Rabaa al-Adawiya Mosque. They were sitting in and demanding some kind of electoral justice after Morsi was deposed by Egyptian General Abdel Al-Sisi. After they had occupied the area for six weeks and with no end in sight, Al-Sisi had them summarily slaughtered. Once the blood had been washed away, the dictatorship has set about the project of erasing any memory that such an atrocity had occurred. Currently situated at the site of the massacre, a statue has been erected. It is not to commemorate the dead, but it’s a monument to the Egyptian military and police. And yet there are those throughout Egypt who choose not to forget. Their symbol is those four raised fingers: “Remember Rabaa.”

Ahmed Abdel Zaher in particular had a dear friend die in Rabaa. He wanted him to be remembered. Al Ahly however, would have none of it. The club already has a very precarious relationship with the current dictatorship. This stems from a match last year against Al Masri in Port Said where Al Ahly saw seventy-two of its fans killed. Most died of asphyxiation, as waves of Al-Masri fans pressed them against locked gates. It is widely believed, with ample supporting video evidence, that security officials did not intervene so as to punish the  hyper-intense Al Ahly ultra fan clubs who played a leading role in the ouster of President-for-life Hosni Mubarak. Since Port Said, the Al Ahly ultras have demonstrated, sat-in and fought in the streets, demanding justice for those killed. But management at Al Ahly seems desperate to not ruffle any more feathers, and Zaher will pay for that with his job, if not worse. He is also due to be “interrogated by the state-run Egyptian Football Association in the coming days.

Al Ahly may be the ones officially putting Zaher “up for sale”, but his release was clearly engineered by the Egyptian state. Only after sports minister Taher Abouzeid said that “dissuasive sanctions await the player by his club and the soccer association,” and that he was confident the team would make “the right decisions, ” did Al Ahly buckle and send him packing. They then released a statement, seemingly out of commitment to turn this tragedy into a farce, saying that “the club’s principles” were rooted in “its firm rejection of mixing politics with sports.”

At least Zaher is not being singled out. Last month, Egypt’s Kung Fu Association banned international star Mohamed Youssef from participating in international championships for two years after he wore a T-shirt bearing the four-finger sign at a tournament in Russia. Youssef was not wearing it while competing but during the medal ceremony where he was awarded the gold. Last week there was another kung fu tournament in Malaysia where Youssef’s replacement, Hesham Abdel Hamid, won the silver. He also flashed four fingers to both remember Rabaa and support his teammate. Abdel Hamid was also punished and stripped of both his medal and prize winnings. As one fan of the sport said to me, “Egypt has not won any medals for years. Yet they punish their champions.”

What is so informative about this crackdown is that Egypt’s dictatorship has committed not only to punishing athletes but punishing their best athletes. They are not only going after demonstrations of remembrance of Rabaa but doing so on the highest possible cultural platforms where they are fully aware it will engender the widest possible coverage. The message is clear: no one is safe, and you will remember Rabaa at your own risk and your own peril.

And yet despite the crackdown, the resistance continues. I spoke with Abdullah Al-Arian, a history professor at Georgetown University’s School of Foreign Service in Qatar and author of the forthcoming Answering the Call: Popular Islamic Activism in Egypt. He said, “Since the tragic events at Rabaa, the wave of protests has only grown across the country. The attempts to censure the actions of conscientious Egyptian athletes and artists who oppose the return to authoritarianism reflects a desperation on the part of the current regime due its failure to establish its legitimacy. Zaher’s demonstration in solidarity with the victims of the military is a clear sign that the leaders of the coup have not yet succeeded in their mission.”

This “mission” to establish legitimacy can take place only if people allow the dictatorship to control the memory of what was done to achieve power. That’s what makes the actions of Zaher, Youssef and Hamid so brave and so important in the quest to achieve democracy in the region. Their message is simply to never forget.