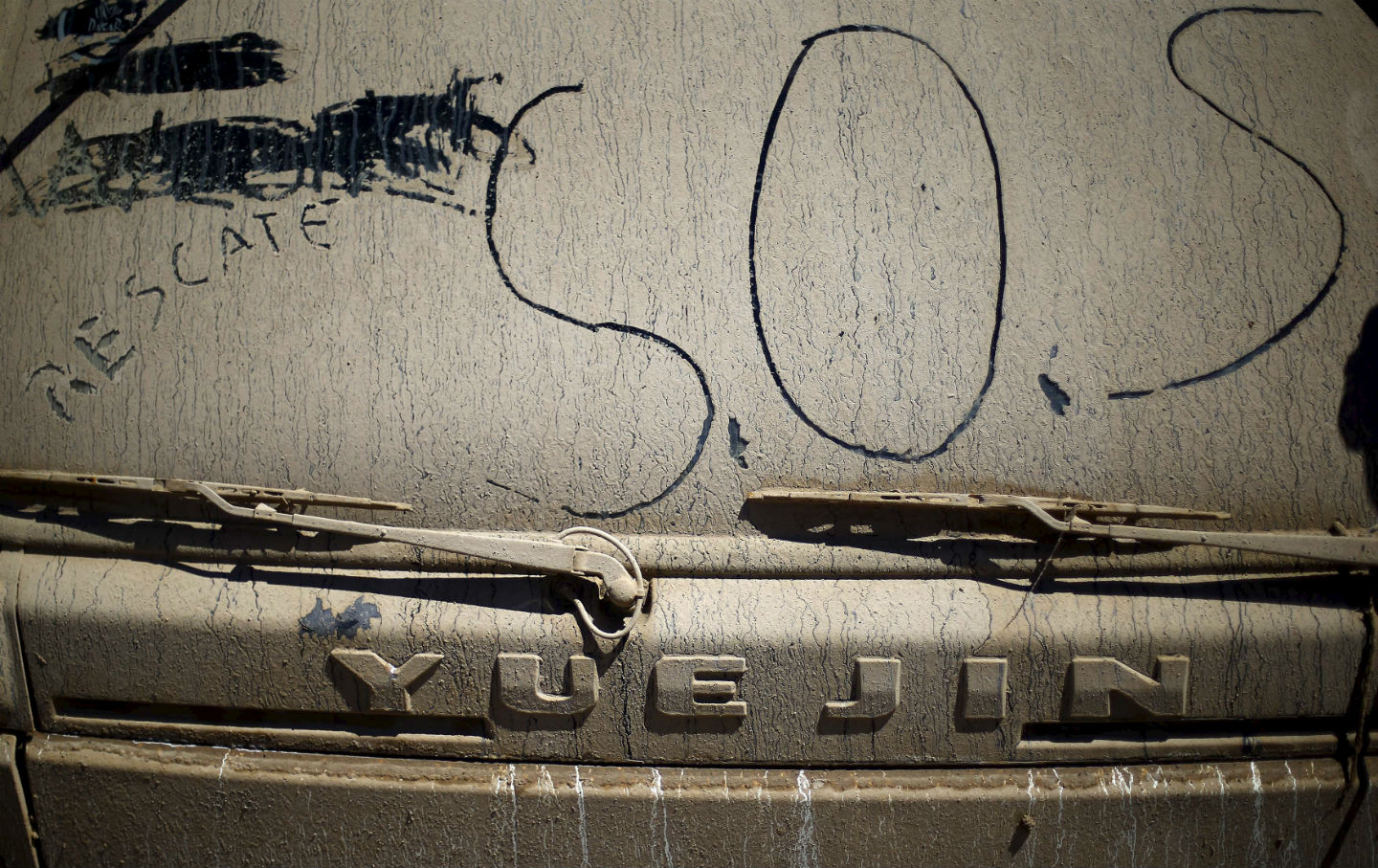 SOS is seen written on a truck at a flooded area at Diego de Almagro town on March 28, 2015. Senior meteorologists stated the cause of the flood was climate change. (Reuters / Ivan Alvarado)

President Trump’s troubled relationship with the truth has brought political crisis to Washington’s insiders, but it portends existential crisis for its scientists. Now the workers who form the brain trust of the federal bureaucracy fear their services may soon be no longer needed.

“I have had people call me and ask me to download certain things…in case they get deleted, just to preserve things,” says Kyla Bennett, a former Environmental Protection Agency attorney under the Clinton administration, now a regional advocate with the watchdog group Public Employees for Environmental Responsibility (PEER). As fossil-fuel ally Scott Pruitt takes the reins at the environmental agency he has repeatedly attacked in court, she says, many EPA employees (including younger staffers who have only worked under the more reality-based governance of the Obama administration) are now “preparing to either get laid off or get moved into another [unrelated] job entirely…. This change goes above and beyond anything that we could have possibly anticipated.”

As terror, along with subtle resistance percolate across core regulatory agencies, particularly the climate-focused EPA, Trump’s aggressively pro-business agenda and ethical slippages threaten to chill the intellectual and political climate. Meanwhile, the modest progress Obama made on climate science might vanish altogether.

While scientists within federal agencies are reportedly lying low, Rush Holt, head of the American Association for the Advancement of Science, spoke out at the organization’s conference in Boston last weekend, while scientists rallied for scientific integrity outside: “When officials use a phrase like ‘alternative facts’ without embarrassment, you know there’s a problem.”

Trump’s promises to withdraw from the Paris Climate Treaty, along with his executive orders to deregulate coal waste dumping and complete controversial oil pipelines, show Trump is hellbent on carrying out a broader agenda of “getting rid” of the EPA’s “job killing” regulations and rolling back Obama’s signature executive actions restricting carbon pollution. But it has yet to be seen how far Pruitt, a former climate-science denialist, will go in potentially alienating the scientific community to serve corporate exploitation of the environment.

An early signal of Trump’s censorship agenda emerged with reports that the administration had temporarily ordered a media “blackout” on EPA activities and suspended pending contracts.

In January the administration gagged the science division of the US Department of Agriculture from disseminating science-related “news releases, photos, fact sheets, news feeds, and social media content”—potentially violating the agency’s scientific-integrity policy and foreshadowing the administration’s designs to soften regulations on Big Ag.

Amid rising panic about suppression of science and regulatory work, EPA employees received a memorandum in February “clarifying” media policy, signaling that the administration was focusing its policing more on science workers than on industrial polluters. The memo warns that if staff communicate publicly about or publish their work:

The federal ethics rules continue to apply to you…. your expression of your views in the workplace needs to comply with agency orders prohibiting conduct that is “abusive or offensive,” or that constitutes harassment…. While you may express yourself, please remember that you can’t misuse your federal position when doing so.

Such behavioral guidelines might sound rich coming from a flamboyantly pugilistic, media-addicted White House. But the warnings also seem aimed at intimidating staff from either seeking to represent the agency while airing critical views, or simply from expressing themselves at all in the public sphere, in order to avoid possible retaliation.

The memorandum also references the Hatch Act, which restricts political and election-related communication in the workplace. PEER notes that this warning coincides with the spectacular launch of Trump’s 2020 campaign, suggesting the administration might invoke the rule to curb speech interpreted as “expressly advocating for or against his reelection.”

Underlying the scientific controversy, however, is a labor dispute. Currently, whistle-blower laws do not comprehensively protect against retaliation based on conflicts over scientific work, absent a full-fledged workplace misconduct violation.

But watchdogs warn that standard federal whistle-blower protections leave scientists extremely vulnerable under Trump. Ruch says that, outside of agency-specific scientific integrity guidelines, “the civil service law treats scientific and technical disputes as a matter of opinion, in which case the agency hierarchy always wins.” Since the policy does not extend standard free-speech protections for scientific data and research, “In practice, government agencies generally are entitled to their own set of facts.”

Still, Ruch believes Trump’s incompetence combined with sensitivity to negative press might backfire in science’s favor and, through leaks and underground communication, “spawn…a dimension of transparency that didn’t exist before” among workers:

I don’t believe that Trump—even if he wants to—can move the clock backwards. The public expectation, as well as the expectation of the workforce, in what they can communicate, has moved forward. And so the question is, whether [Trump] accommodates it or tries to fight against it. But if he does, he’ll be fighting against the tide.

Ruch notes that the White House backtracked after news about suspected science suppression hit the headlines, hinting that at least for now, officials are reluctant to stoke public outrage over censorship.

Meanwhile, the tide of resistance rises. Science-agency workers have organized public rallies as well as anonymous protests to defend scientific integrity. A flurry of rogue science agency Twitter accounts has built underground channels for knowledge transmission. To protect against censorship or staff purges under Pruitt, for example, Bennett says nervous EPA employees are now “forming partnerships with peers or each other to be able to raise issues or speak openly while the people who are still there can’t…. We’re trying to pass information onto nonprofit organizations who are involved in particular issues so that they can raise the comments and concerns that EPA…will no longer be able to bring forward under this administration. So in other words, we’re trying not to lose the message, trying not to lose the science.”

At the dawn of the Trumpocene, even under a regime fueled by contempt for truth, facts will still matter.