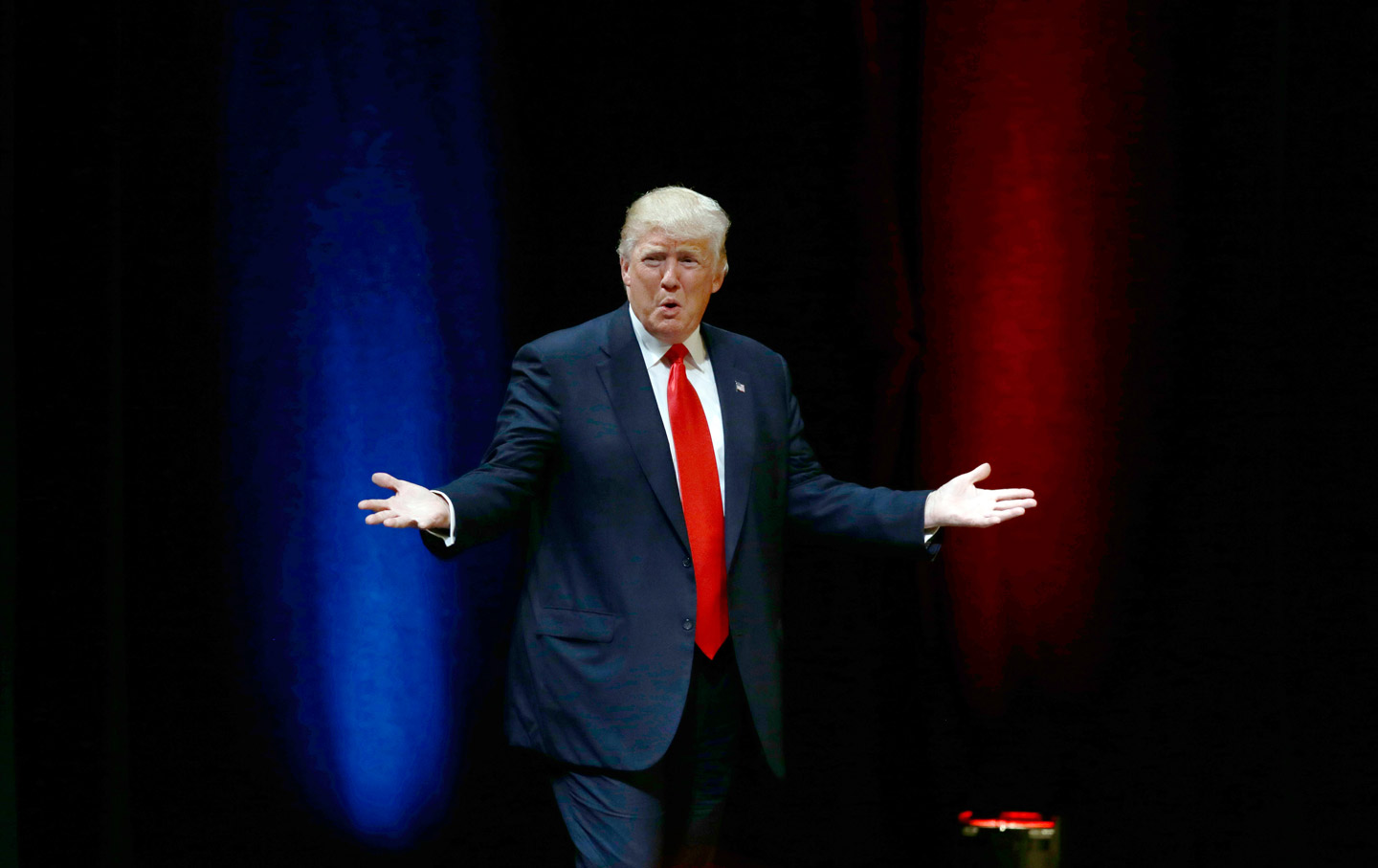 Yesterday, Donald Trump sent fingers a’wagging and tongues a’clucking by praising Saddam Hussein: “He was a bad guy—really bad guy. But you know what? He did well? He killed terrorists. He did that so good. They didn’t read them the rights. They didn’t talk. They were terrorists. Over. Today, Iraq is Harvard for terrorism,” he said.

How much longer can such faux outrage be maintained? By this point, is it really necessary to, yet again, trot out FDR’s applause for, say, the Dominican Republic’s Rafael Trujillo, responsible for, among other atrocities, the 1937 massacre that slaughtered over 10,000 Haitians? Roosevelt called Trujillo his “great and good friend.” “He might be a S.O.B, but he is our S.O.B,” Roosevelt reportedly said, not just of Trujillo but of any number of Latin American slaughterers. Does the pundit class really need to be reminded that US presidents have long been rapturous in their acclaim of Latin American dictators, including the Somozas in Nicaragua, Stroessner in Paraguay, Pinochet in Chile, Efraín Ríos Montt in Guatemala? The list knows no bounds.

Today, it would hard to find a top-tier Democrat—Barack Obama, John Kerry, Bill and Hillary Clinton—any less effusive in their praise of Saudi Arabia’s leadership, or any other Middle East ally, provided that they are on our side. Clark Mindock writes:

While secretary of state in 2009, Clinton praised Egypt’s then-dictator Hosni Mubarak, telling ABC News she considered the president “and Mrs. Mubarak to be friends of my family.” Last year, following the death of Saudi King Abdullah bin Abdulaziz, the Clintons released a statement through their foundation saying that they were “grateful” for the king’s efforts to bring peace to the Middle East, the close economic cooperation between Saudi Arabia and the U.S., and the “kingdom’s humanitarian efforts around the world.” On Syrian President Bashar Assad, the Intercept notes that the Democratic front-runner suggested in 2011, as the revolt against him began, that he had the potential “a reformer.”(She was referring to the thoughts of members of Congress who had been to Syria, though she was not challenging their assessment.) Clinton also praised Chinese President Xi Jinping in 2013, who she said appeared to be a pragmatic leader and a natural politician.

Another of Hillary Clinton’s pragmatic allies is Álvaro Uribe, who, funded by Bill Clinton’s Plan Colombia, presided over the paramilitarization of state and society in Colombia. Clinton, whose entanglements with Uribe are deep, considers the former Colombia president a friend. The US embassy in Colombia, in 2010, had to caution her not to be too gushing in her praise of Uribe. The US ambassador sent an e-mail advising that:

While in Colombia, the most important thing the Secretary can do is avoid effusive praise for President Alvaro Uribe, who leaves office in August,” the email told Clinton. The former ambassador told Clinton that “it is important to recognize” that “the Colombian president has been a solid backer of U.S. policy and U.S. interests in the region, and has achieved some important improvements in the country’s security situation.” However, the email advised, this recognition should avoid “repeating the tone of Defense Secretary [Robert] Gates’ April visit.

During that trip, Gates called Uribe a “great hero.” It is difficult to convey to US readers the degree of misery Uribe imposed on Colombia, using the power of the state to execute a massive program of land dispossession on behalf of his death-squad social base, largely funded, bipartisanly, by Washington. Clinton, fully briefed on the atrocities Uribe carried out, described him in her book Hard Choices much as Trump describes Hussein, as a “hard-nosed, hands-on leader.”

Ronald Reagan, who led the larger New Right project of re-sanctifying US foreign policy after its Vietnam disaccreditation, felt compelled to drape his support for Central American death squads in the rhetoric of American exceptionalism. The Contras in Nicaragua were the “moral equivalent of the Founding Fathers.” Guatemala’s génocidaire-in-chief, Ríos Montt, was “a man of great integrity” and “totally dedicated to democracy.”

But it’s Trump’s praise of similar hard-nosed, hands-on men that “earns bipartisan scorn,” Politico tells us. Trump’s real sin is that he strips US foreign policy down to its brutal base logic. He doesn’t moralize the monstrosity.