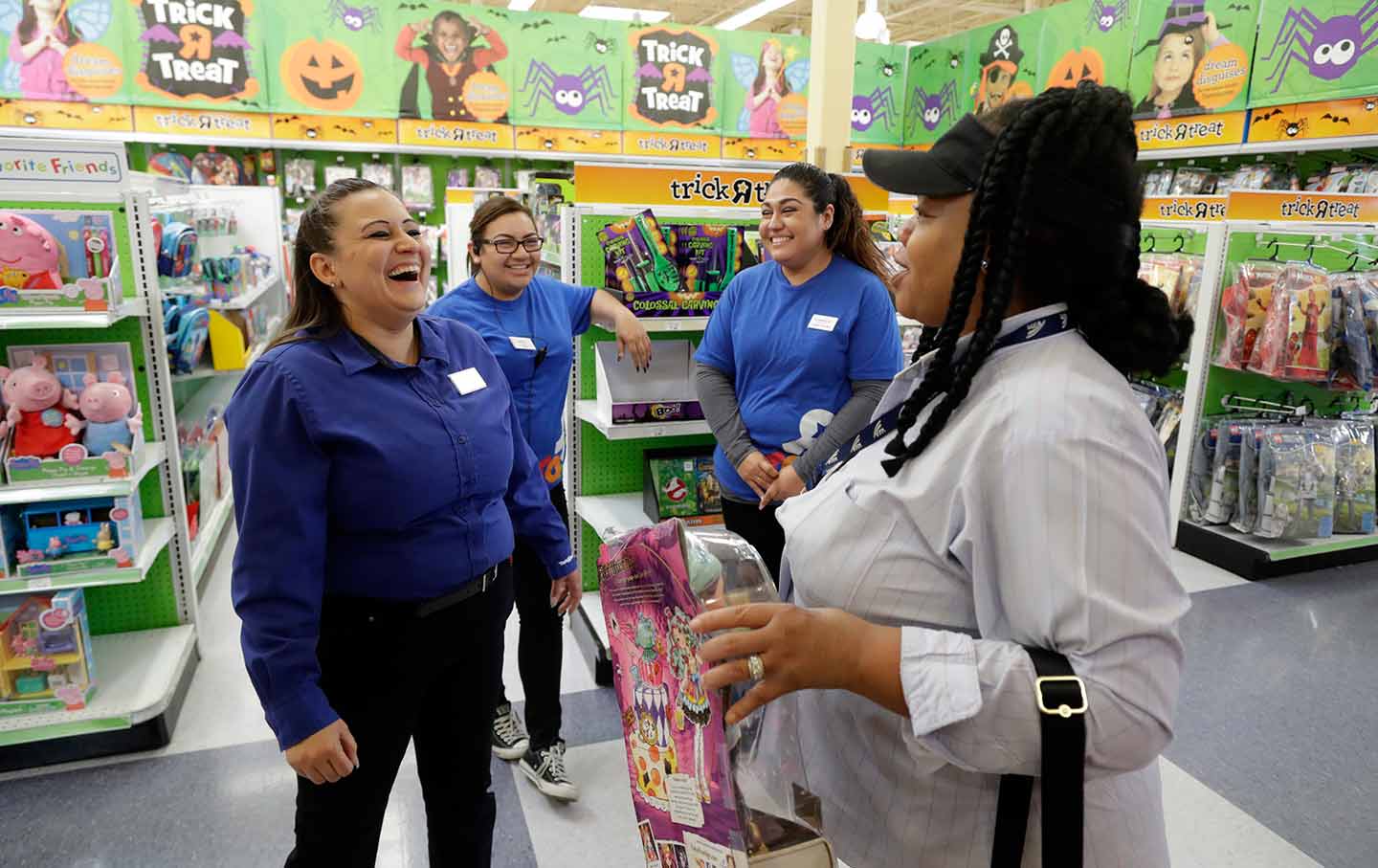 Just a few weeks ago, Donald Trump’s campaign was careening towards a crushing Election Day defeat, but as Americans head to the polls, the prospect of a Trump presidency remains possible. As Trump pushes towards the finish line, he continues his campaign of division.

Trump’s campaign has already been building a wall—not between the United States and Mexico but between American communities. He is building this wall with myths about white people under siege from black and brown “others”—immigrants stealing jobs, Black Lives Matter activists threatening “law and order,” or Muslim Americans undermining shared values.

I know firsthand how well this story plays. But I also know we have the capacity to tear down walls so that people can unite and build an economy and political system that works for all of us. I grew up in Southern Indiana. First in Seymour, the birthplace of John Cougar Mellencamp. We later moved to nearby Medora, a town of 800 people. I remember 40-mile drives that felt like hours just to get to a town of 20,000 people. We lived next door to the local lumberjack, Otis, and his wife, Flossy, and across from the landfill.

Medora was featured in a 2013 documentary film that chronicles the town’s high-school basketball team after it lost all 22 of its games during the 2008–09 season. In the background is a 25-year story of economic loss. In 1992, the Medora Brick Company, in business as far back as 1904, closed its doors, taking some 50 jobs with it. Around the same time, the United Plastics Company, employing 1,000 people throughout the region, shut down. As jobs disappeared, so did a significant percentage of Medora’s population. Like so many rural communities in America, there are few signs of economic investment. Instead, there’s a growing underground economy of meth labs and opioid dealers.

For the last year, neighboring Scott County has made national headlines. The Scott County town of Austin was the center of an HIV outbreak from people sharing needles while injecting Opana, a semi-synthetic opioid. In a town of only 4,295 people, over 190 cases of HIV have been reported in Austin alone. The economic and human crisis of what is happening in rural America is real. It makes sense that people are scared and angry.

As a young man I moved to Chicago to be a community organizer in West Humboldt Park, a Latino and African-American neighborhood on Chicago’s Northwest Side. One of the first things people in the community wanted to change was a vacant factory. Once a source of jobs and community pride, the building that had housed the factory literally began falling apart, forcing children to walk over bricks and debris on their way to school. Eight blocks over, neighbors were mounting a similar effort to determine the future of a boarded-up Schwinn factory. These were but two of the thousands of factories large and small that disappeared from Chicago in the last three decades, and with them, the economic opportunity they offered the surrounding communities. These closings compounded the challenges created by years of segregation, housing discrimination, and bank redlining that disadvantaged black and Latino neighborhoods in Chicago for generations.

While they seem to exist at opposite ends of American life—one rural and white; one urban, Latino and black—the median incomes of Medora, Indiana, and West Humboldt Park in Chicago are nearly identical. They are examples of what happens when capital flees, when government disinvests, when people and place are abandoned.

Donald Trump wants us to address this disinvestment by turning on one another, by having the people in Medora blame the folks in West Humboldt Park. But it wasn’t immigrants who brokered bad trade deals and undermined the right of workers to form a union. It wasn’t working-class black people who deregulated the financial sector and then crashed the economy, and who are now hoarding money in tax havens overseas. Those were the actions of wealthy CEOs and billionaire businessmen like Donald Trump, along with politicians who do their bidding. He, like so many in his party, encourage us to fight among ourselves so we won’t focus on what they are doing to us.

Conservatives laud our capitalist system as one that efficiently sorts out the economy’s “winners” and “losers.” Yet even its boosters are beginning to recognize that today’s brand of capitalism is particularly extreme, producing a handful of big winners while pushing the majority to the sidelines, in a continual struggle to make ends meet.

Racism is a system that also sorts out who wins and who loses, but based on race. From the genocide of Native Americans, to slavery, Jim Crow, and the near-daily killing of black people by police, you don’t need an eye for nuance to see the power of race in determining people’s quality of life—or even their right to live. While working-class white people benefit on many levels because of race, we ultimately lose because racism effectively divides the Medoras and Humboldt Parks of America, preventing us from coming together to address the mass inequality that marks today’s economy. As a result, the big winners are people like Donald Trump and others who are concentrating power to write the rules in ways that allow the rich to get much richer, at the expense of the rest of us.

For those who want to create an America where all people truly have real opportunity to prosper at work, home, and community, we have to be clear about what unites us and not be fooled by efforts to divide us. The increasing levels of disinvestment in people and place that marks rural Indiana or Chicago’s West Side will become the new normal absent a big intervention. That requires tearing down walls while acknowledging the differences. We must embrace a shared understanding of what forces created this moment, and then come together to advance an alternative. We can start by recognizing that we’ve found the villain in this story, and it’s not each other.