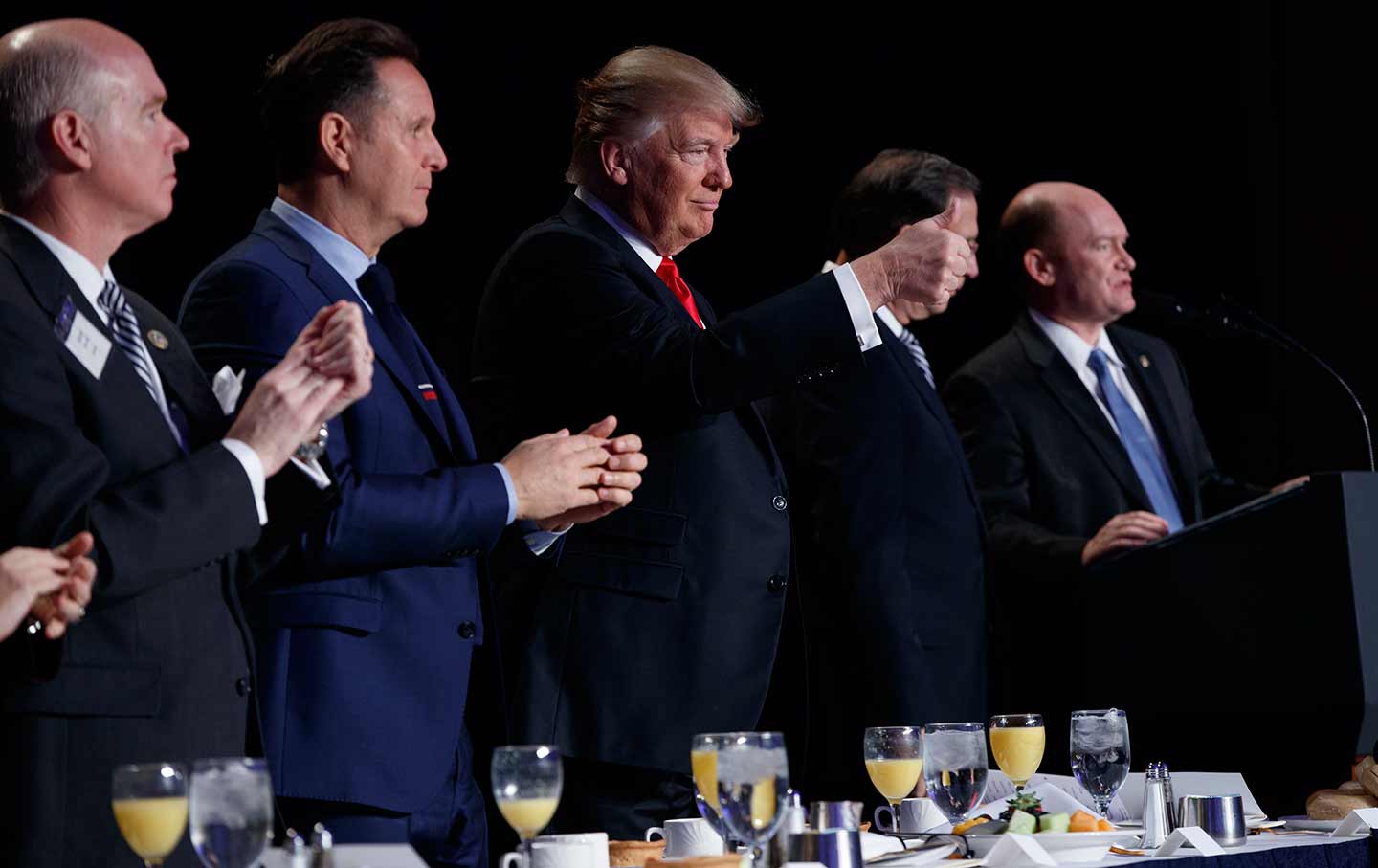 The religious right is more emboldened under Donald Trump’s presidency than it has been in recent memory, thrilled by his Supreme Court nomination, his cabinet appointments, and his parroting of claims that religious freedom is under siege by the forces of political correctness.

Based on his first few weeks in office, Christian-right activists are expecting that the president who owes them bigly for his surprise win will take a battering ram to the wall separating church and state.

The scope of their aspirations was revealed in a leaked draft executive order, obtained by the Investigative Fund at the Nation Institute and published at TheNation.com, that shocked constitutional scholars with its staggering breadth. The draft order—whose authenticity has not been disputed by the White House—would create unprecedented exemptions based on religious or purely “moral” objections to a person’s sexual orientation, gender identity, and even private activity, such as getting an abortion or having sex while unmarried. Such an order would be Hobby Lobby on steroids, creating an opening for almost anyone—government workers, federally funded social-service organizations, small-business owners, and more—to refuse to hire, serve, or provide public accommodations to others merely by citing one’s religious beliefs. By sanctioning such discrimination, the order would create a government rubber stamp for a particular religious view, in violation of the establishment clause of the First Amendment.

Religious-right leaders were quick to react with effusive praise, expressing confidence that Trump, despite progressive objections—or, perhaps, because of them—would sign the order. Ryan Anderson, a fellow at the conservative Heritage Foundation and a vociferous opponent of marriage equality, called on Trump to “stand up to the liberal outrage and hostility to ordinary American values that fueled his rise in the first place,” hailing the order as “good, lawful public policy” that fulfills Trump’s campaign promises to religious conservatives. Bryan Fischer, the incendiary American Family Radio host known for his unabashedly homophobic views, called the draft order a “masterpiece” and wrote that if Trump signed it, he would “flip the script” on the “radical homosexual agenda,” allowing “religious liberty [to] now triumph over sexual deviancy for the first time in nearly a decade.”

At his daily briefing for White House reporters, press secretary Sean Spicer danced around questions concerning if and when Trump would sign such an order, but his sympathies were clear: An employee’s ability to express his or her faith at work, Spicer asserted, is too often “pushed out in the name of political correctness.” The press secretary also painted the government itself as a regular violator of religious freedom, adding: “There’s clearly a lot of evidence in the last couple years of the government coming in with regulations and policies that have, frankly, denied people the ability to live according to their faith.”

The draft order also takes aim at another pet issue of Trump’s: repealing the Johnson Amendment, which was added to the Internal Revenue Code in 1954 to prohibit tax-exempt organizations, including churches, from endorsing political candidates under penalty of having their tax exemptions revoked. Trump’s promise to repeal the amendment was a centerpiece of his campaign outreach to the religious right; at the National Prayer Breakfast this month, he vowed to “totally destroy” it.

This could happen even without an executive order, raising the specter of churches becoming unaccountable de facto political-action committees. If the House and Senate pass a bill—introduced the day before the prayer breakfast—to repeal the amendment, Trump is certain to sign it into law. Such a change would create, in the words of Noah Bookbinder, executive director of Citizens for Responsibility and Ethics in Washington, “a massive loophole for dark money, allowing unlimited sums of money to flow to nonprofit organizations for expressions of political views—but only on one side of the issues—with no disclosure of the source of that money.”

Whether Trump and his allies can use these tactics to erode the separation of church and state will, of course, depend ultimately on the courts. But as with his travel ban on Muslims and refugees, Trump could sow chaos and inflict harm in the interim—and lash out at judges who rule against his policies. Neil Gorsuch, Trump’s choice to fill the Supreme Court vacancy, is admired by the Christian right for his opinions on religious issues, including in the Hobby Lobby case. Given the events of the last two weeks, senators should be pressed to examine the scope of Gorsuch’s embrace of religious exemptions—and his views on the use of executive power to unilaterally expand them.