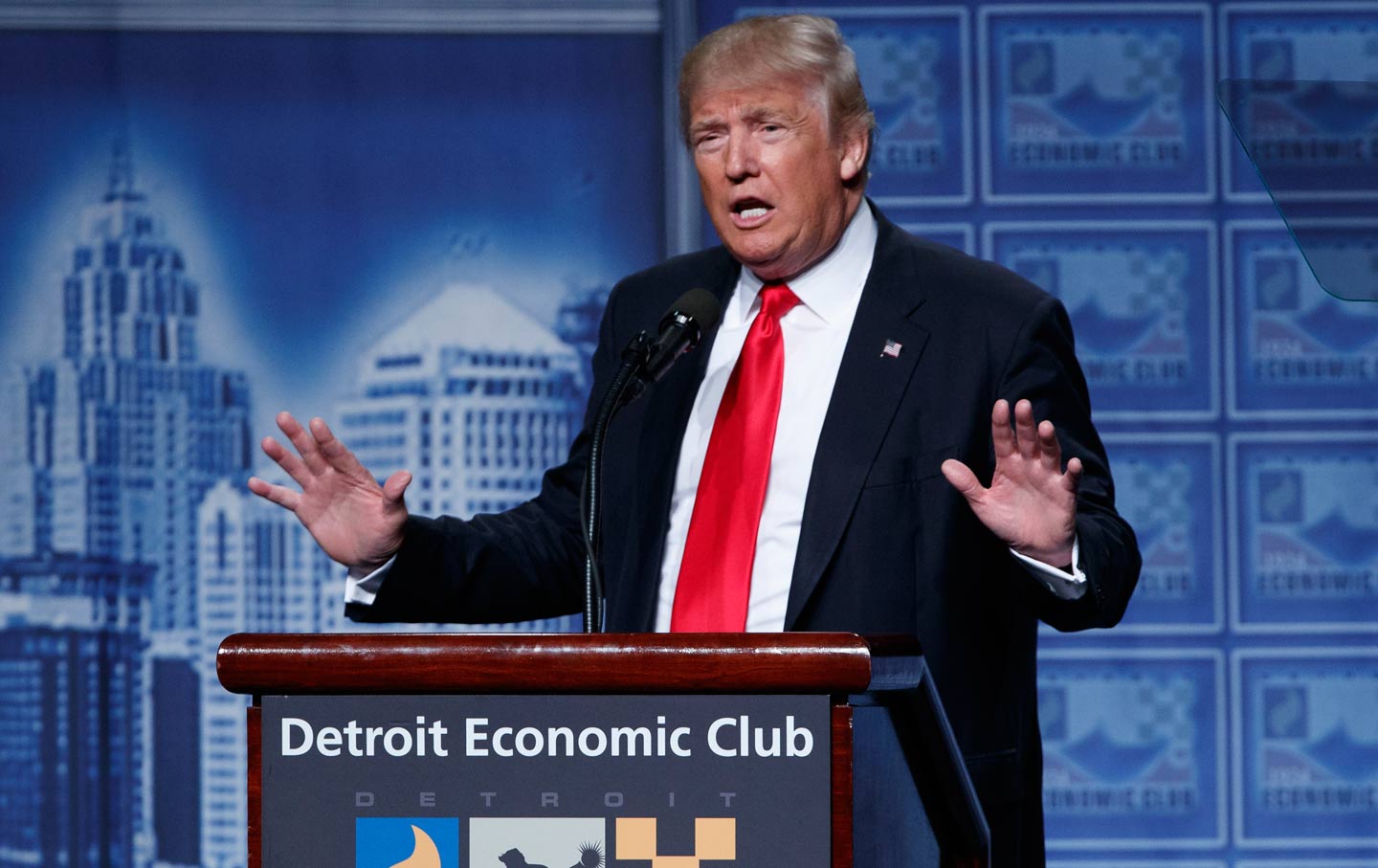 Earth to Trump: Reaganomics failed. But even for this man, who rarely shows any interest in evidence, his speech before the Detroit Economic Club on Monday was disappointing and even dismaying. He spread fairy dust over the audience, promising big tax cuts to the wealthy and easy solutions to complex problems, all the while citing the “Reagan revolution” as his model.

I was waiting eagerly for Trump to outline the details of his economic plan. The man who liked to scare people about America’s $19 trillion in debt was about to tell us how his promise of huge income tax cuts—estimated, before paring back some, at $10 trillion over 10 years—could generate enough economic growth and rising tax revenues to keep the deficit from exploding.

But Trump didn’t bother. He proposed cutting the nation’s seven tax brackets to three, and he now said the top bracket would follow Paul Ryan’s proposal and be cut only to 33 percent, not Trump’s original proposed 25 percent, as if this were reasonable. He said he wanted to reduce business taxes sharply, ending the incentive to move overseas, and do away with the estate tax (which he, like other Republicans, called the “death tax”), though it affects almost no one in America because taxes start on estates of roughly $5.5 million.

He gave us no details about the expected growth rate of the economy and the ability to maintain a reasonable deficit. Rather, Trump said with a straight face that he would roll out the details in coming weeks. Moreover, he’s promised not to cut Social Security or Medicare and has said he’ll spend much more than Hillary Clinton’s proposed $300 billion on infrastructure. Even Trump’s one moment of social awareness for the conditions of working women—a promise to make childcare expenses deductible—lacked sufficient details. This proposal, too, may mostly help the better off.

How will we get back to the future of America’s first industrial age, Mr. Trump? Details forthcoming.

In fact, Trump devoted most of his speech—targeted to voters in Michigan, Pennsylvania, and Ohio—to antediluvian ideas about bringing back an industrial age of big steel, big oil, and big auto so archaic that you may have thought you were watching a newsreel from the 1920s, if it hadn’t been in color. It was a world with no climate change, basically no international competition, and no Internet. How will we get back to the future of America’s first industrial age, Mr. Trump? The details will be forthcoming.

What the economy needs right now is some serious Keynesian deficit spending to pump demand back up to where it belongs. So Trump is moving in the right direction, although in the wrong way. America doesn’t need major tax cuts—especially not for the wealthy. It needs serious public investment in infrastructure and education, social programs to meet contemporary needs, and more help to the poor through job creation, housing subsidies, and, in my view, outright cash payments. This can be accomplished in the near term through deficit financing.

Monetary policy cannot do the job of stimulating economic growth alone, because interest rates are already so low. In truth, the double-barreled gun of simultaneous monetary and fiscal policy has always been the optimal path to fast growth. But the obsession with government deficits has led to austerity policies—deficit reductions through higher taxes and reduced social spending—that have dominated the rich world and is the primary reason for the disappointing economic recovery in Europe and North America.

The reason deficit spending can work here is that US GDP has a lot more potential to grow than policymakers, including many Democrats, fully understand. Even the non-partisan but very cautious Congressional Budget Office says the economy can be about 2 percent larger than it currently is. But the CBO has been reducing its estimate of future potential, as the growth rate of productivity, or output per hour of work, keeps falling. One reason for disappointing productivity is slow growth itself, which can undermine productivity because it leads businesses to invest less.

According to economist Josh Bivens, if the trajectory of the economy had continued in a straight line after 2007, unhindered by the Great Recession, GDP today would be 13 percent greater. The true potential is probably somewhere in between, which means the American economy could easily grow 3 to 4 percent a year for the next few years rather than the predicted, and accepted, 2.5 percent. That would produce an additional 3 million jobs and wouldn’t generate a flare-up of inflation. If inflation did spurt, the Federal Reserve could step on the brake by raising interest rates.

An injection of $300–400 billion in deficit spending–old-fashioned Keynesian stimulus—could push the US rate of growth up to the healthy levels of earlier decades, help raise wages, and stoke lagging capital investment. But Trump would create enormous deficits with his tax cuts, leading to the same trap Reagan found himself in, a growing economy fighting high interest rates and inadequate social spending.

Trump would do well to remember how badly Reaganomics fared. It was under Reagan when income inequality began to grow rapidly. Under Reagan, wages for typical workers stagnated and homelessness soared. Reagan’s biggest spending cuts to pay for his mammoth tax reductions were to subsidized housing and welfare. Reagan, Trump should be reminded, had to raise taxes a few years after his big cuts because the budget deficit was still out of hand. The promise of supply-side economics never came through.

In fact, Reagan never got the federal deficit down to the level it had reached under Jimmy Carter, who he so aggressively criticized for profligacy. Reagan left office with the deficit at 2.95 percent of the economy, compared to 2.58 percent under Carter, and debt as a much higher percentage of GDP than when he took office. The GDP growth he did get, in other words, was driven by debt.

Like Reagan, Trump is also promising deregulation on a massive scale. Reagan gutted the federal anti-trust departments, leaving us with damaging oligopolies controlling almost every major industry in the nation, from healthcare to travel to high tech. He also ushered in financial deregulation—a bipartisan policy, especially when Bill Clinton pursued it as well in the 1990s—culminating in a mammoth savings and loan crisis and the first of the major financial bailouts, setting the stage for the crisis of 2008.

There is good news in the world of economics, however: The obsession with austerity is in retreat.

There is good news in the world of economics, however: The obsession with austerity is in retreat. To be sure, it hasn’t and probably won’t go far enough. The Germans retain their disastrous iron lock on fiscal policy in the European Union, for example, arguably the most damaging set of government policies since the Great Depression.

But there’s growing evidence of the waning influence of austerity economics elsewhere. Most notably, in Japan, Prime Minister Shinzo Abe announced a 28 trillion yen ($265 billion) fiscal package this summer. In the wake of Brexit, Theresa May, Britain’s new prime minister, said she is abandoning David Cameron’s call for a budgetary surplus by 2020, and officials there say a new stimulus package may be forthcoming in the autumn. And in Canada, Prime Minister Justin Trudeau has implemented fiscal stimulus.

The People’s Budget proposed by America’s Congressional Progressive Caucus is a good model for a deficit-generated stimulus here in the States. In the short run, it proposes spending $500 billion over two years on public investment, including infrastructure, education, and social programs, which could spur higher growth and cut the unemployment rate to 4 percent. Down the road, the CPC proposes raising income taxes on the wealthy to control the budget deficit, leaving it smaller as a percentage of GDP than current policies will.

Democratic presidential candidate Hillary Clinton is not as bold as the CPC and still clings to bad austerity habits by promising to pay for almost all of her new programs by raising taxes. She plans to spend some $300 billion on infrastructure in coming years, and another $700 billion over ten years in such areas as early childhood education and free tuition for two years of community college. Her proposals for paid family leave and research and development investment would require another $500 billion over ten years.

While she is stuck in the rut of promising to raise taxes—leaving her vulnerable to jabs from Trump—it seems likely she is aware that hers is an indirect path to deficit increases in the short run, given the difficulty of getting tax increases passed if the Republicans, as is likely, maintain control of the House. According to economist Mark Zandi, her tax increases, including higher income taxes for high-income individuals and reforms for multinational corporations, would come to more than $1 trillion over ten years. They would mostly fall on the rich, leaving the tax code, as Zandi, says, significantly more progressive. Most heartening to me, however, is her call to end the austerity-inspired mandatory spending cuts agreed to by Congress and President Obama in 2011, which have had so much to do with tepid growth. She has promised to raise revenue to finance the end of this sequester, but hasn’t yet said how. Zandi figures this will require more than $500 billion. We should hope part of this will be deficit financed.

It looked for a while as if Trump would admit that higher deficits are tolerable as a pathway to faster growth. But he clings to the Reagan mythology that tax cuts will raise incentives to invest and work, not serve as the Keynesian source of demand America needs. In a new book called How Big Should Our Government Be, three colleagues (Lane Kenworthy, Peter Lindert, and Jon Bakija) and myself present strong evidence showing that higher taxes and more social spending do not deter growth. Trump’s tax cuts are so enormous it is impossible to make the numbers add up.

If the austerity iceberg is melting some, it may help explain the rising US stock market, despite a high dollar and uncertainties over Brexit. Annual growth rates of 3-4 percent could return the US economy to its past greatness, to paraphrase Trump. But his plan would create unmanageable deficits, skimp on investment, and not solve major social problems. And that’s leaving out his uninformed and extremist ideas about unshackling energy from environment regulations, undoing financial regulations, and imposing impractically high new tariffs on imports. America’s trade strategies need adjustment, but not this radically. For all his bombastic claims, the man who pretends to be courageous refuses to present us with the facts.