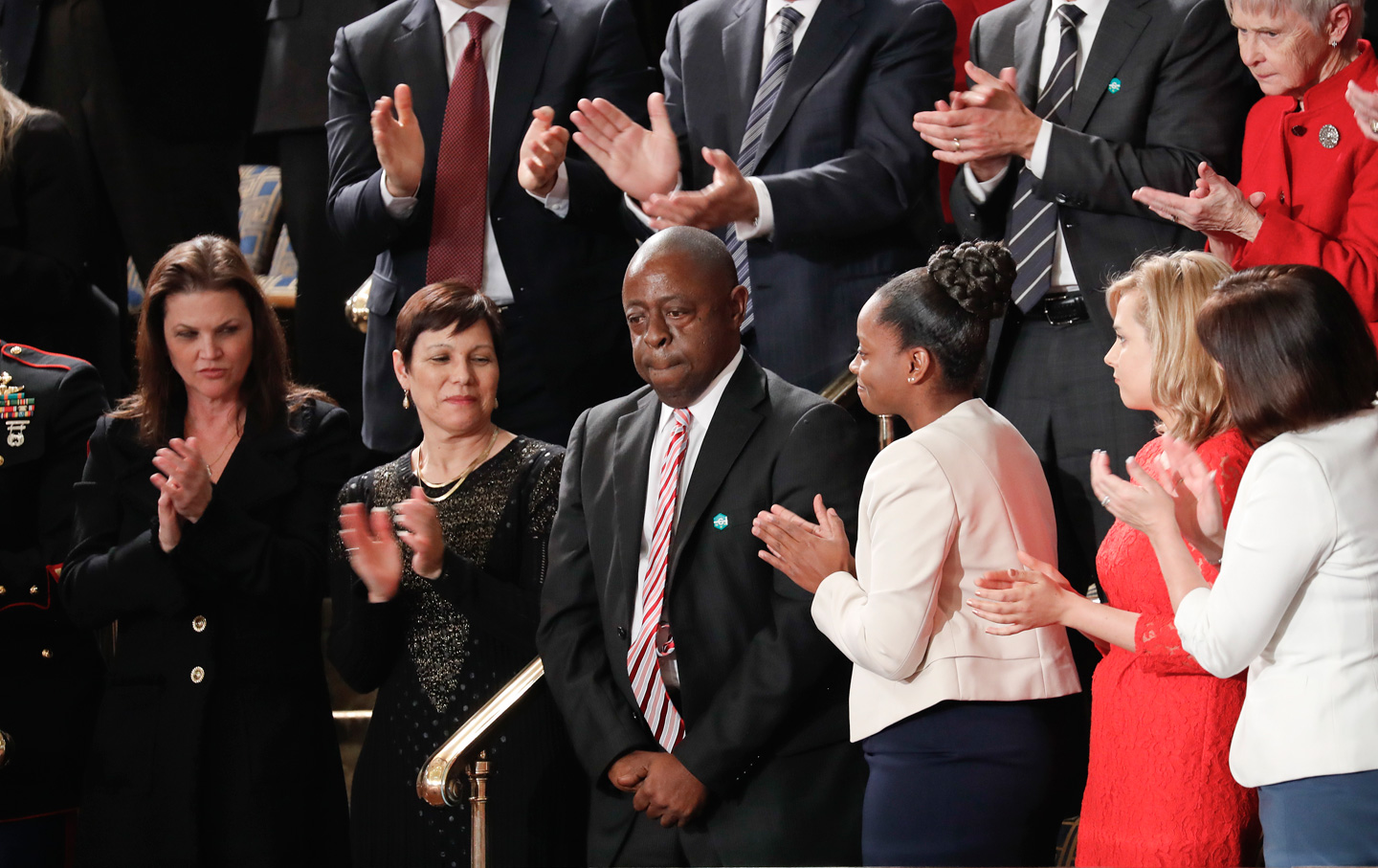 Last week, Donald Trump stood in front of a joint session of Congress and announced his guest, Jamiel Shaw Jr. As the camera zoomed in on him, Shaw smiled with humility, and those around him stood up and clapped in his honor. “Jamiel’s 17-year-old son was viciously murdered by an illegal immigrant gang member, who had just been released from prison,” Trump said. “Jamiel Shaw Jr. was an incredible young man, with unlimited potential, who was getting ready to go to college where he would have excelled as a great quarterback. But he never got the chance.”

The joint session wasn’t Shaw’s first appearance with Trump. He tagged along with him on the campaign trail and even appeared in a Willie Horton–style campaign ad that touted Trump’s tough-on-immigration approach. “Trump is the only one saying: ‘You’re gonna be dealt with,’” Shaw says in the ad. But, as Bustle pointed out, between 2010 and 2014 the Department of Homeland Security counted only 121 people charged with murder after having been previously held by immigration officials, about 0.001 percent of the total number of undocumented immigrants in this country.

The cynicism of this move comes into focus when we look at Trump’s actual agenda for black communities. Outside of the tragic stories like Shaw’s, black Americans don’t place quite as high on the chain anywhere else in Trump’s America. Take, for example, his recent executive order doubling down on and expanding protections for police officers. The order, Preventing Violence Against Federal, State, Tribal, and Local Law Enforcement Officers, will “enforce all Federal laws in order to enhance the protection and safety of Federal, State, tribal, and local law enforcement officers,” and “define new federal crimes, and increase penalties for existing federal crimes, in order to prevent violence” against officers. The order also aims to create definitions of “new crimes of violence” against officers and establish mandatory minimums for existing ones. Billed as a way to bolster safety and protection, the order is really a reaction against the Black Lives Matter movement and the Department of Justice’s agenda under President Obama, which investigated and scrutinized police departments across the country for infringing upon the civil rights of black and brown Americans.

There was also Trump’s “New Deal for Black America,” a last-ditch effort to appeal to black voters days before the election. One of its proposals, “Protection from Illegal Immigration” stated that “No group has been more economically harmed by decades of illegal immigration than low-income African-American workers.” But other than rhetorically setting these two communities against each other in a race to the bottom, Trump’s plan offers very little to actually create better jobs for black Americans, and many of his proposals—from school choice to beefing up policing to financial deregulation to ignoring climate change—would disproportionately hurt black Americans. In other words, Trump doesn’t want a new deal for black America—he just wants to fasten us in tighter to the old deal of low-wage, insecure, go-nowhere jobs.

The champion of black America Donald Trump is not. Instead, he is continuing to seize on the vulnerability of communities that are disenfranchised, that suffer from higher rates of joblessness, poverty, inadequate housing, and subpar education.

Donald Trump isn’t the first to pit Americans against one another for political gain. For a moment after reconstruction in the 1890s, a populist movement emerged, one that lead to some alliances between poor whites and blacks in the South, particularly among farmers. Tom Watson, a white Georgia politician, delivered a speech to a crowd of black and white farmers, highlighting their common interests. “You are made to hate each other because on that hatred is rested the keystone of the arch of financial despotism which enslaves you both,” he said. “You are deceived and blinded because you do not see how this race antagonism perpetuates a monetary system that beggars you both.” Watson’s was an economic message: “The colored tenant is in the same boat as the white tenant, the colored laborer with the white laborer and that the accident of color can make no difference in the interests of farmers, croppers and laborers.” The alliance didn’t grow large enough to change the course of American history. Powerful white landowners were able to convince poor whites of their racial superiority, and Jim Crow and the Ku Klux Klan would cement an America that privileges racial unity over class. Later, Watson himself turned on the black Americans he once supported.

Trump knows something, like Watson did, about black Americans: We will never stop seeking out first-class citizenship. But history has also taught us to be wary of the smoke and mirrors deployed by politicians like Trump. Baiting black people and trying to pit us against Mexicans won’t work when all of Trump’s other policies are ruinous to black communities. Trump touts a new deal for black America, but he forgets that while blacks benefited from the original New Deal—a set of economic recovery programs that lifted America out of the Great Depression—it was not intended for us. Trump is right about one thing: Black people do want a new deal. But not one that reinforces our place as second-class citizens with a pernicious mandate to trample on the backs of those without any citizenship at all.