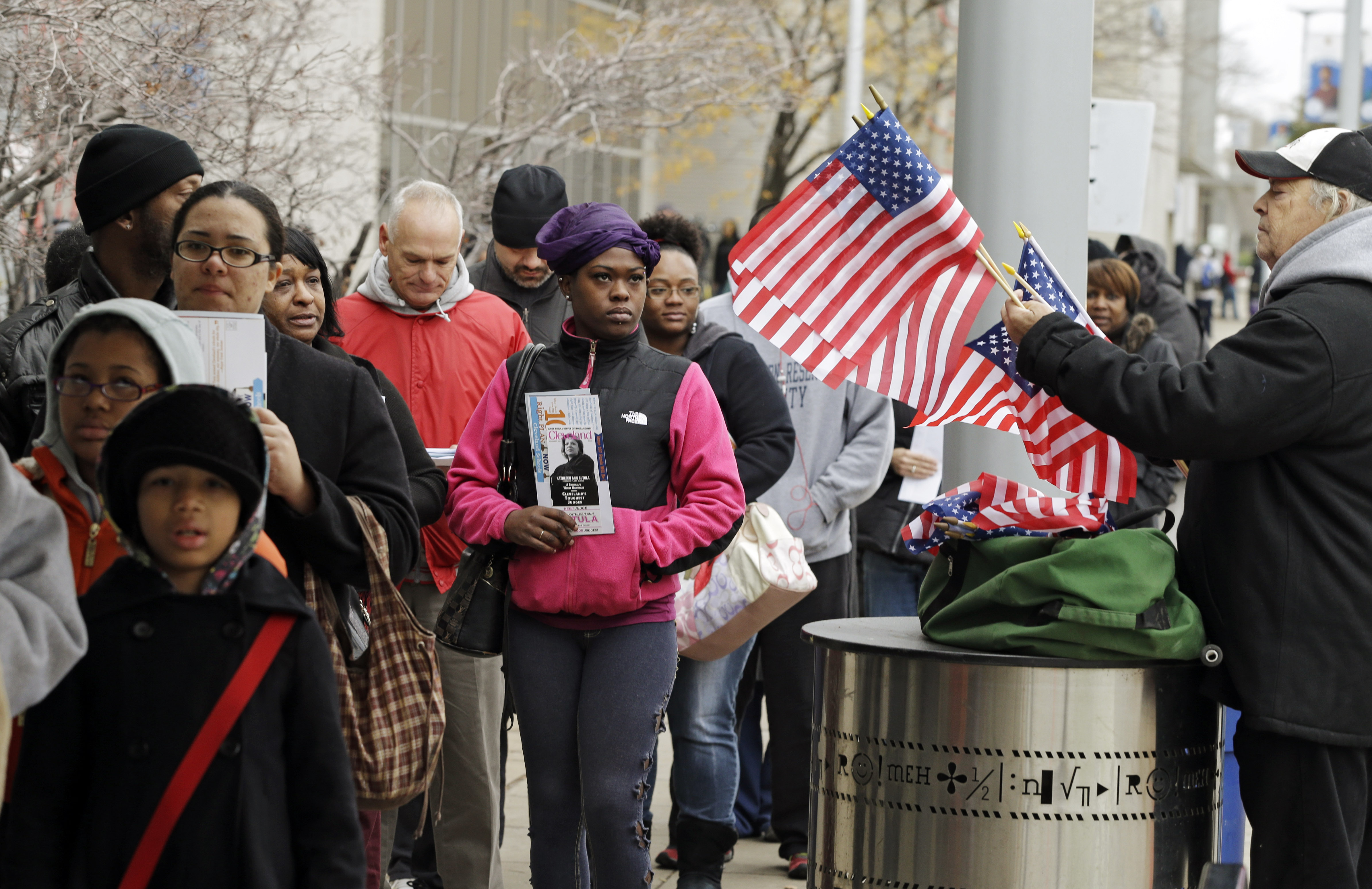 Voters wait in line outside the Cuyahoga County Board of Elections in Cleveland. (AP Photo / Mark Duncan)

In 1981, during a New Jersey gubernatorial election, the Republican National Committee launched a “Ballot Security Task Force” that sent sample ballots to voters in predominantly African-American and Hispanic precincts. When 45,000 letters were returned as undeliverable, the RNC tried to remove the voters from the rolls and hired off-duty cops to patrol polling sites in black and Hispanic neighborhoods of Newark and Trenton. Police carried firearms at polling places and wore armbands reading “National Ballot Security Task Force,” while the RNC posted large signs saying, this area is being patrolled by the national ballot security task force. it is a crime to falsify a ballot or to violate election laws.

After the election, the Democratic National Committee won a court settlement ordering the RNC to “refrain from undertaking any ballot security activities.” Now Donald Trump may be violating the consent decree against the GOP by asking his supporters to become a “Trump Election Observer” to “Stop Crooked Hillary From Rigging This Election.”

Trump unveiled the page on his website the same day he campaigned in Pennsylvania, where he claimed, “The only way we can lose, in my opinion—and I really mean this, Pennsylvania—is if cheating goes on…. And we have to call up law enforcement. And we have to have the sheriffs and the police chiefs and everybody watching…. The only way they can beat it in my opinion—and I mean this 100 percent—if in certain sections of the state they cheat, OK? So I hope you people can sort of not just vote on the 8th, go around and look and watch other polling places and make sure that it’s 100 percent fine, because without voter identification—which is shocking, shocking that you don’t have it.”

Let’s leave aside the fact there’s no widespread voter fraud in Pennsylvania or elsewhere and that Trump is losing Pennsylvania by nine points in the Real Clear Politics average. His election observer program mirrors the type of voter intimidation the courts have blocked the RNC from doing. And his call for law-enforcement officers to monitor the polls expressly violates Pennsylvania law. “No police officer in commission, whether in uniform or in citizen’s clothes, shall be within one hundred feet of a polling place during the conduct of any primary or election, unless in the exercise of his privilege of voting, or for the purpose of serving warrants, or unless called upon to preserve the peace,” according to Pennsylvania Title 25, Section 3047. “In no event may any police officer unlawfully use or practice any intimidation, threats, force or violence nor, in any manner, unduly influence or overawe any elector or prevent him from voting or restrain his freedom of choice.”

I predicted Trump would resort to these tactics, writing in The Nation in May: “Voter Suppression Is the Only Way Trump Can Win.” His terrible numbers among nonwhite voters have only dropped further since then—he’s winning zero percent of black votes in crucial swing states like Ohio and Pennsylvania—and now that Trump is sinking in the polls, his talk of “rigged” elections is growing more desperate.

Trump’s support in the primary directly correlated with racial resentment toward African Americans, Hispanics, and Muslims, which is why it’s not a stretch to imagine Trump’s election observers’ racially profiling and intimidating minority voters at the polls. His widely debunked claim that “people may vote 10 times” is his campaign’s latest racist dog whistle, on par with calling Mexicans “rapists,” proposing banning Muslim immigration to the United States, or vowing to deport 11 million undocumented immigrants.

Poll challenges have their roots in Jim Crow–era voter suppression, writes Nicolas Riley of the Brennan Center for Justice:

Challenger laws were historically enacted and used to suppress newly enfranchised groups, like African Americans and women. Many states originally enacted challenger laws to block minority voters’ access to the polls. Virginia, for instance, passed its first challenger law in the immediate wake of Reconstruction alongside a host of other suppressive measures, such as poll taxes and literacy tests, aimed at recently freed former slaves. Other states—like Florida, Ohio, and Minnesota—similarly passed challenger legislation during the nineteenth century to suppress turnout in black communities. Even in states where challenger laws were not enacted with an obvious discriminatory purpose, political operatives still often used challenges to discriminate against newly enfranchised groups of voters. For example, during a special election in Lisle, NY, in 1918—the first election after women won the right to vote in the state—every woman who attempted to cast a ballot was challenged at the polls.

Trump is taking a well-worn page from his party’s playbook. The RNC has repeatedly tried to disenfranchise minority voters through such tactics even after the consent decree was issued in the 1980s. From a decision by the US Court of Appeals for the Third Circuit:

In Louisiana during the 1986 Congressional elections, the RNC allegedly created a voter challenge list by mailing letters to African-American voters and, then, including individuals whose letters were returned as undeliverable on a list of voters to challenge. A number of voters on the challenge list brought a suit against the RNC in Louisiana state court. In response to a discovery request made in that suit, the RNC produced a memorandum in which its Midwest Political Director stated to its Southern Political Director that “this program will eliminate at least 60,000–80,000 folks from the rolls…. If it’s a close race…which I’m assuming it is, this could keep the black vote down considerably.”

In 1990, the DNC brought a lawsuit alleging that the RNC violated the Consent Decree by participating in a North Carolina Republican Party (“NCRP”) program. The DNC alleged that the RNC had violated the Decree in North Carolina by engaging in a program of the North Carolina Republican Party (“NCRP”) in which 150,000 postcards were sent to residents of predominantly African-American precincts. This program allegedly attempted to intimidate voters by warning that it is a “federal crime…to knowingly give false information about your name, residence or period of residence to an election official.” The postcards falsely stated that there was a 30-day minimum residency requirement prior to the election during which voters must have lived in the precinct in which they cast their ballot.

In 2004, the week before the general election for president, Ebony Malone, an African-American resident of Ohio, brought an enforcement action against the RNC, alleging that the RNC had violated the consent decree by participating in the compilation of a predominantly minority voter challenge list of 35,000 individuals from Ohio. Malone’s name was on the list. To compile the list, the RNC had sent a letter to registered voters in high minority concentration areas of Cleveland and the Ohio Republican Party sent a second mailing approximately a month later. Registered voters whose letters were returned as undeliverable were added to the challenge list.

Following an evidentiary hearing, the District Court issued an Order barring the RNC from using the list to challenge voters and directing the RNC to instruct its agents in Ohio not to use the list for ballot security efforts.

More recently, the Tea Party group True the Vote tried to recruit one million poll watchers in 2012, to make voting “like driving and seeing the police following you.”

The problem of voter intimidation is particularly worrisome in 2016 because after the Supreme Court gutted the Voting Rights Act, the Department of Justice “severely curtailed” the number of federal election observers who monitor voting discrimination at the polls.

The only election rigging occurring in 2016 is the GOP’s attempt to suppress the vote. It likely won’t succeed, especially with recent court victories, but that doesn’t mean Trump and company won’t try.