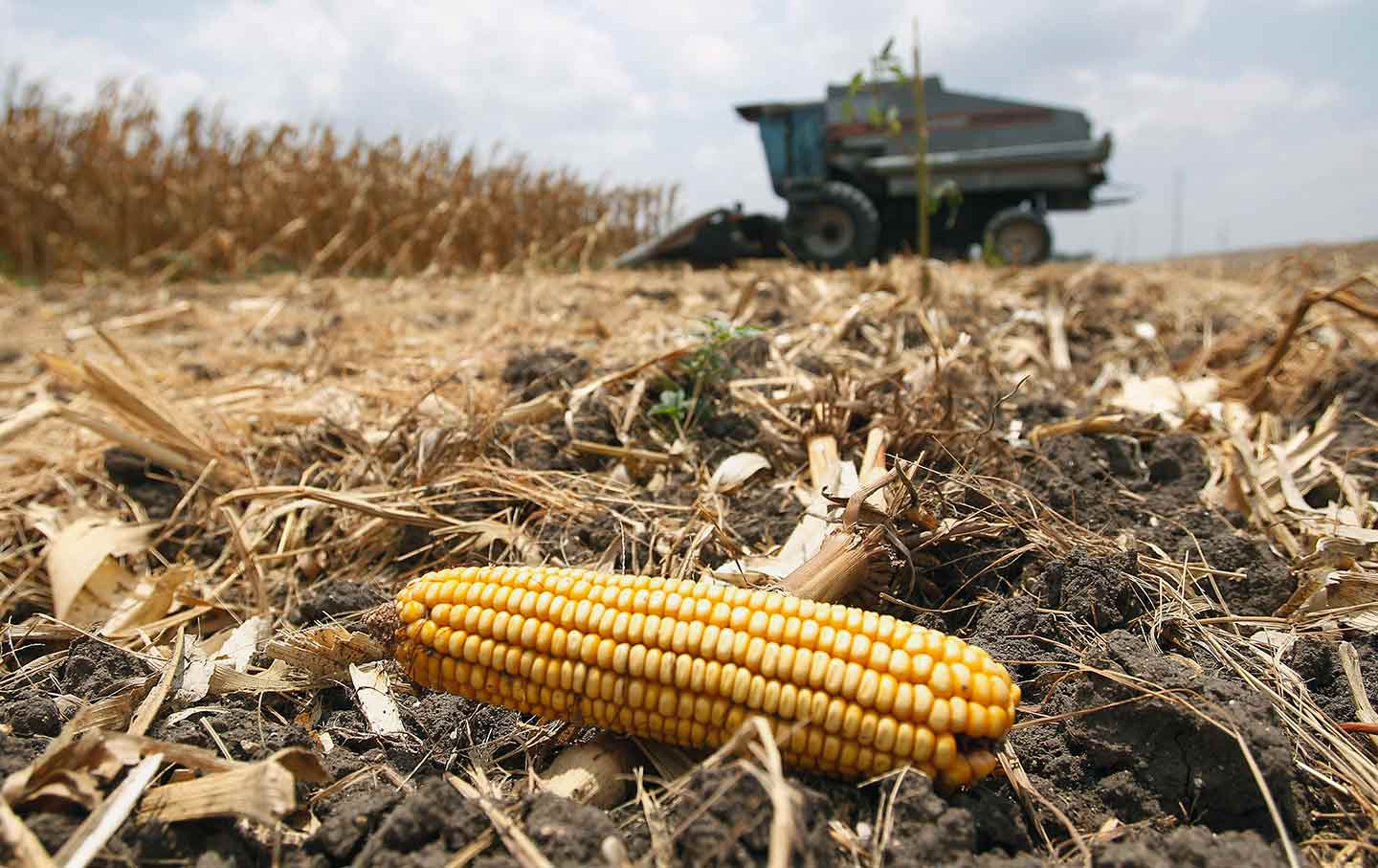 Has Donald Trump been good to America’s family farms? He certainly seems to think so: “Oh, are you happy you voted for me. You are so lucky that I gave you that privilege,” the president told members of the American Farm Bureau Federation in Nashville on Monday, where he gave his first major address of the year. Trump clearly enjoyed himself. He preened and smirked, baring his white teeth. “Get up,” he instructed the audience at one point, demanding a standing ovation.

Democrats Can Win Rural Voters by Taking on Big Agriculture

Whose Side Is the American Farm Bureau On?

In fact, there is very little by way of policy to support Trump’s claim that his administration is “fighting for our farmers,” though his administration has been good to agricultural corporations and the largest industrial farms. Consider the new tax law, which Trump described as a major accomplishment on behalf of “working families, small businesses and…family farmers.” (And which he overstated the size of by $4 trillion.) According to economists from the United States Department of Agriculture, the new law will actually raise the tax burden for the lowest-earning 20 percent of farming families. The richest 10 percent will capture between 50 and 70 percent of the law’s benefits.

Trump also claimed the law spares farmers from the “punishment” of “the deeply unfair estate tax,” allowing them to “keep your farms in the family.” But very few family farms are impacted by the estate tax: In 2017, it affected some 80 small farms and closely held businesses. “To continue this mantra that you are helping family farmers with tax reform is just not the reality,” said Rob Larew, vice president of public policy and communications for the National Farmers Union. “The vast majority of these family farms are in no way impacted by the estate tax.”

“The vast majority of these family farms are in no way impacted by the estate tax.”

In his speech, Trump bragged about the stock market’s rise—“Everybody happy with your 401(k)?” he asked, never mind that fewer than half of farm households have any kind of retirement account at all. He made no mention of his proposal to shrink the USDA budget by 21 percent. Trump promised to “end chain migration” and “build the wall,” though he said nothing about the shortage of farmworkers exacerbated by his anti-immigration policies. (As many as 70 percent of America’s farmworkers are undocumented.) Trump touted two new executive orders intended to expand broadband Internet in the many rural communities that lack access. But the executive orders don’t provide any new funding, which is the primary barrier. And while Trump boasted of the number of regulations cut during his first year in office, he didn’t say anything about the most significant agriculture-related regulatory rollback: the withdrawal of rules proposed by Obama under the Grain Inspection, Packards, and Stockyards Act (GIPSA) to protect farmers and ranchers from predatory and retaliatory practices by the giant agribusinesses that control the meat market. (Read David Dayen for more on the GIPSA rules.)

Joe Maxwell, a fourth-generation hog farmer from Missouri, said he was “disappointed” to hear Trump talk about Wall Street and 401(k)s “at a time when America’s family farmers are seeing another year of decline in our profits, in our income. We’re on the verge of a major farm crisis.” Farm income has fallen sharply since 2013, as prices for wheat, dairy, beef, and other products crashed. Farmers, particularly small and mid-sized operators, are having a harder time securing credit. Their plight is made more difficult by the fact that individual farmers have very little power in the marketplace. For instance, more than 70 percent of America’s poultry farmers live below the poverty line; they’re bound by an oppressive contract system controlled by a handful of big companies. “Large corporations are now dictating the practices and the pricing, therefore denying the farmers fair market value for their labor, their contracts, or the livestock that they sell,” Maxwell explained.

Maxwell, who formerly served as Missouri’s lieutenant governor, is now executive director of the Organization for Competitive Markets, a Nebraska-based organization that advocates for strong enforcement of antitrust laws to reduce the power of large corporations in the food system. OCM is a plaintiff in a lawsuit challenging the Trump administration’s withdrawal of the GIPSA rules. “We’re glad [Trump] recognizes the value of rural America, but we’re very discouraged that his barometer is off,” Maxwell said. “Simply because agribusiness is doing excellently on Wall Street does not mean family farmers are receiving any piece of that growth or prosperity.”

"Simply because agribusiness is doing excellently on Wall Street does not mean family farmers are receiving any piece of that growth or prosperity."

The occasion for Trump’s speech itself reveals something about his approach towards agriculture. The American Farm Bureau Federation is a powerful lobbying group that describes itself as “the unified national voice of agriculture” in America, “governed by and representing farm and ranch families.” But agricultural interests in America are hardly unified, as demonstrated by the Trump administration’s decision to repeal the GIPSA rules—a move the Farm Bureau supported. What benefits agricultural corporations isn’t always in the interests of family farmers, and like Trump, the Farm Bureau usually comes down on the side of big money. It’s not hard to understand why: Besides being an agricultural lobby group, the bureau is also a multibillion-dollar network of insurance companies with significant financial investments in some of the world’s largest agribusiness firms. Of the 6 million member families the bureau claims to represent, millions are not farmers but insurance customers. (There are only about 2 million farms in America.)

Though farming communities helped to elect Trump, there has been some backlash to his fumbling approach to agriculture policy—even Iowa Republican Chuck Grassley described the withdrawal of the GIPSA rules as “pandering to big corporations.” At least one Democratic candidate is trying to take the opportunity to present farming families with an alternative: 27-year old Austin Frerick, an economist who is putting antitrust issues at the forefront of his challenge to Republican Congressman David Young in Iowa’s 3rd Congressional District. Frerick’s first campaign video, released this week, features farmer Chris Petersen talking about the damaging impact of consolidation in the seed industry. “Farmers are being marginalized by the big money, for the big money,” Petersen says in the ad. “There needs to be some courage in the political field out there to talk about these things, offer ideas, offer solutions.”