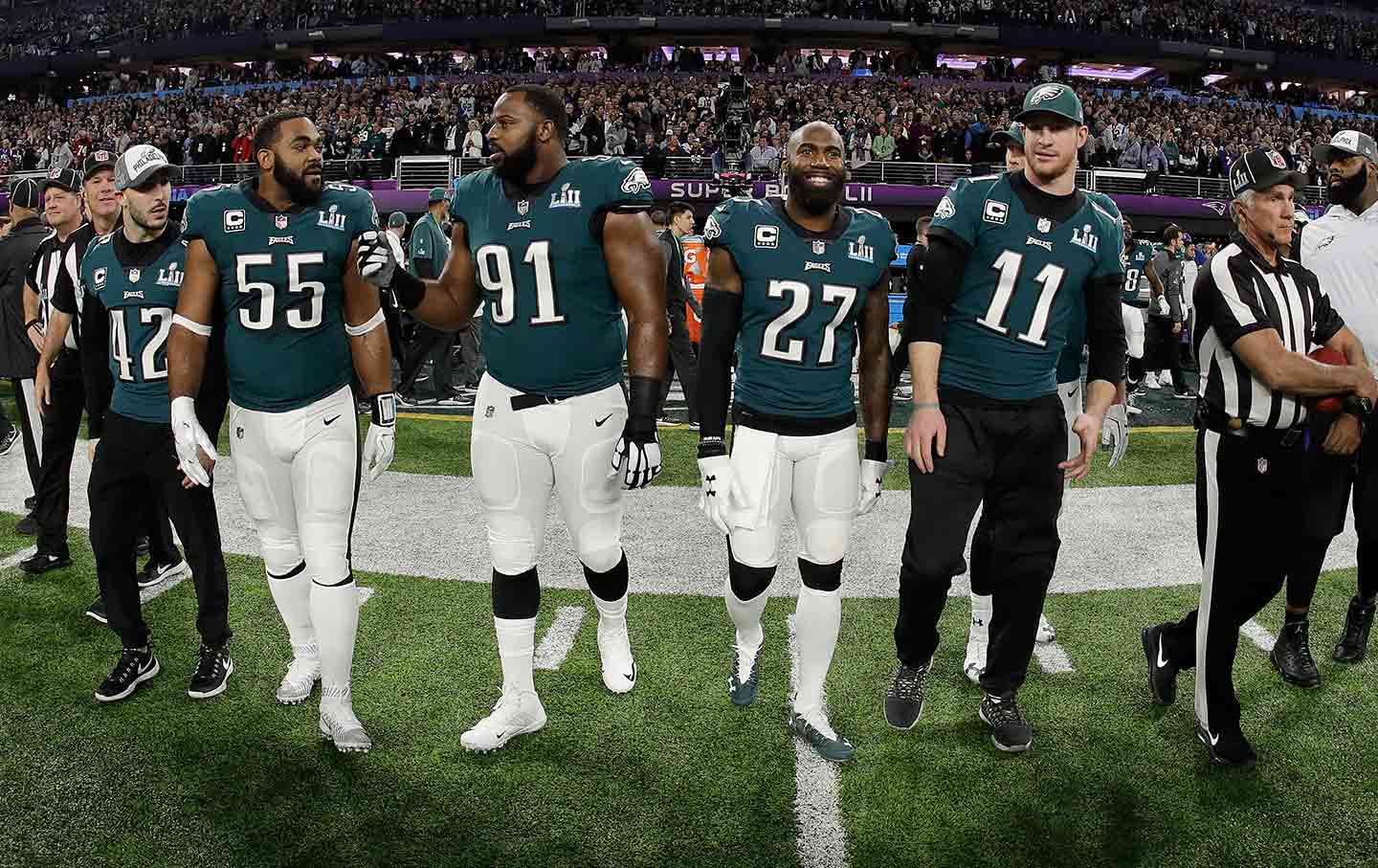 In a year of irredeemably stupid statements from this White House, it is difficult to imagine one more fraudulent and cowardly than what was belched from 1600 Pennsylvania Avenue yesterday evening. Donald Trump has disinvited the Super Bowl champion Philadelphia Eagles to the White House, less than 24 hours before their scheduled visit:

The Philadelphia Eagles are unable to come to the White House with their full team to be celebrated tomorrow. They disagree with their President because he insists that they proudly stand for the National Anthem, hand on heart, in honor of the great men and women of our military and the people of our country. The Eagles wanted to send a smaller delegation, but the 1,000 fans planning to attend the event deserve better. These fans are still invited to the White House to be part of a different type of ceremony-one that will honor our great country, pay tribute to the heroes who fight to protect it, and loudly and proudly play the National Anthem. I will be there at 3:00 p.m. with the United States Marine Band and the United States Army Chorus to celebrate America.

Like so much that comes from this White House, it is difficult to know where to begin correcting the lies. These players don’t “disagree with their President” because he wants them to stand for the anthem and honor the military. That is nonsense. The truth is that most of this highly politicized team was not going to go to the White House because they see “their President” as a racist, sexist bottom feeder and they don’t want to be used as political props for a photo op to further his agenda of division and demonization.

As wide receiver Torrey Smith said to CNN in February:

For me, it’s not just about politics. If I told you that I was invited to a party by an individual I believe is sexist or has no respect for women or I told you that this individual has said offensive things towards many minority groups.… this individual also called my peers and my friends SOBs, you would understand why I wouldn’t want to go to that party. Why is it any different when the person has title of President of the United States?

Statements that use NFL players as a target for Trump’s demagoguery were supposed to end last week, when NFL owners unilaterally adopted a harsh policy of fining those on the sidelines who do not “stand at respect” for the anthem. They enraged their players, the union—and even a minority of owners—all to appease Trump. But there is no appeasing a petulant bully. Trump, as he has told NFL owners, sees this as “a winning issue.” Let that sink in: He sees the scapegoating of black athletes who stand up to police violence as a winning issue. Since Trump sees this as a winner, he was never going to let it go and, true to form, he hasn’t. Now NFL owners now look worse than stupid: They look feeble. They didn’t just get played. They played themselves.

If only they had the courage to truly link arms with their players and stand with that quaint notion known as the truth. They could take a lesson from Torrey Smith who tweeted after Trump’s gaseous statement, “So many lies smh. Here are some facts: 1. Not many people were going to go 2. No one refused to go simply because Trump ‘insists’ folks stand for the anthem 3. The President continues to spread the false narrative that players are anti military.”

That NFL players are more likely to live in a fact-based universe than the president says as much about 2018 as anything else possibly could.