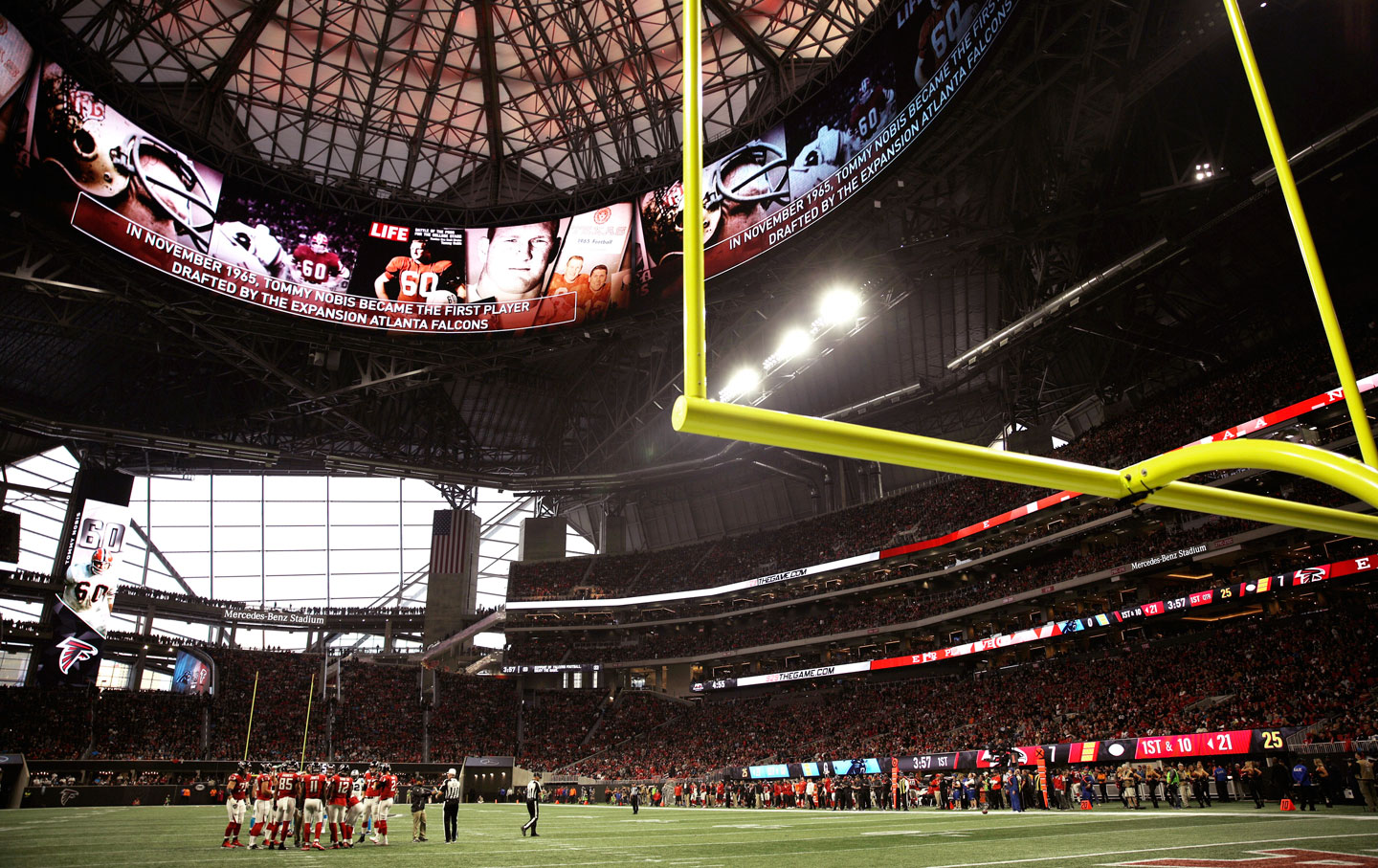 Tonight a significant portion of the United States will be watching the national college-football championship in Atlanta, pitting the University of Alabama against the University of Georgia. Donald Trump will reportedly be in attendance, which is surprising considering the fact that he’s not known to be a football fan. His only interactions with the sport have involved destroying the USFL, failing to buy an NFL team, defending the name of the Washington R*dskins, and calling black NFL players “sons of bitches” last fall for protesting police violence during the national anthem. Trump thinks a sport he never played has gotten soft, with too few concussions for his liking.

Trump is not a friend of football—he just loves breathing in what is most reactionary about the culture that surrounds it.

The official reason Trump is going to the game, according to professional prevaricator Sarah Huckabee Sanders, is that he wants to go to “Trump country.” One would be forgiven for being concerned that this president thinks there’s an actual place called Trump Country. But let’s assume that Huckabee Sanders means a place where Trump’s bruised ego can bask in friendly surroundings. It’s still bizarre, considering that Alabama just elected Democrat Doug Jones to the Senate and exit polls show Trump holding a 48 percent disapproval rating among voters in one of the reddest states in the country. As for Atlanta, they like Trump about as much as low-sodium barbecue sauce. This is the city that Trump described as being “in horrible shape and falling apart (not to mention crime infested).”

Not surprisingly, Trump’s visit will be met with protests. A group called Refuse Fascism is organizing people to take a knee outside the stadium. In explaining the protest, one organizer said in a statement, “Trump dissed Atlanta by calling it ‘crime infested’—code for ‘too many Black people.’ dissed John Lewis for correctly calling him ILLEGITIMATE; dissed football players of conscience, women, immigrants, LGBTQ people, Muslims, science, critical thinking, the environment; threatens the whole world with nuclear holocaust…” In other words, they’ve got reasons.

These demonstrations matter for reasons beyond the fact that Trump should be protested on general principle. They matter because the revolt against racism in sports that we have seen in both the NFL and high schools over the past year skipped college football. The NCAA is a multibillion-dollar operation run by coaches who are often the most highly paid public employees in their states, more powerful than university presidents.

Players have no union and no recourse if their scholarships are pulled. It’s a sport dependent on black “talent” and merciless in how it is exploited. Players are fighting for that NFL dream in conditions of indentured servitude. Most players who have been asked about how they feel about Trump’s presence tonight have basically said, “I’m just here to play football.” But their evasive answers have far more to do with the conditions of their employment and the requirement that they shall rock no boats than an absence of political conviction.

It might be happening outside the stadium, but Trump will be protested in Atlanta. This isn’t “Trump country.” His own White House, filled with people who think he’s barely sentient, isn’t Trump country. At this point, outside Mar-a-Lago, one wonders where that magical place might be. It’s not in Atlanta. It sure as hell won’t be at the halftime show, which will feature hip-hop artist Kendrick Lamar. Maybe Trump will find it in the stands. Or maybe he’ll leave in the middle of the first quarter. After all, as much of Puerto Rico languishes without power and Baltimore schools lack heat for the students, the president of this country has cheeseburgers to eat, cable news to watch, and “stable genius” tweets to send.

One thing is certain: With their shared belief of exploitation and the silencing of black athletes, college football and Donald Trump deserve each other.