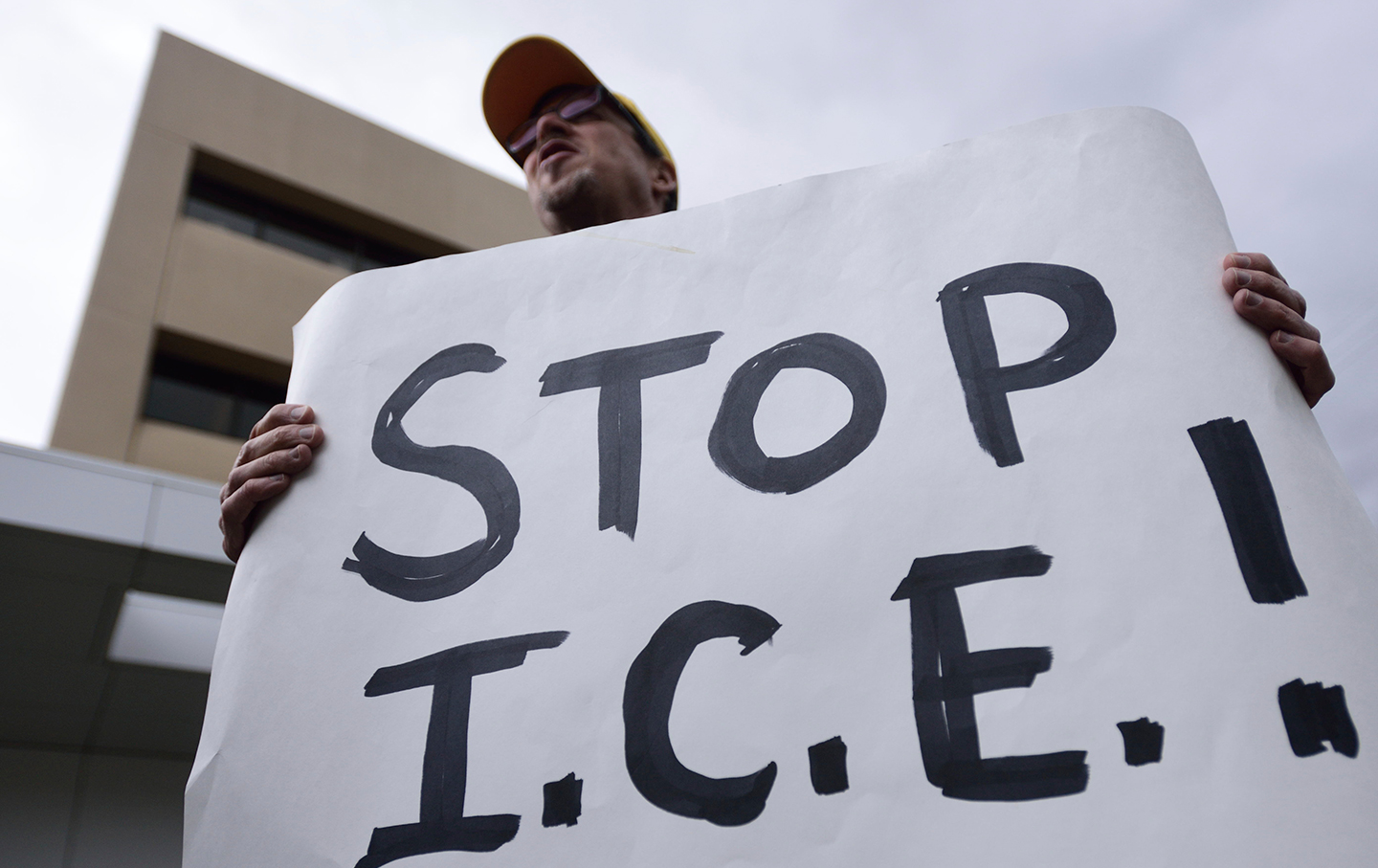 Stephen Siegel protests outside the Immigration and Customs Enforcement (ICE) building in Portland, Oregon, on March 27, 2017. (Sipa USA via AP)

What if you had to choose between reporting an abusive spouse, and being deported yourself? 1

No one should have to face this lethal choice, but as President Trump’s deportation drive pummels immigrant communities, many victims of domestic and gender-based abuse are finding themselves trapped with no good option. 2

Trump’s hardline executive orders—to intensify enforcement through raids, arrests and detentions while repealing Obama-administration policies that limited cooperation between federal and local enforcement agencies—are shocking in themselves. But Archi Pyati of the DC-based advocacy group Tahirih, sees systemic social costs among service providers observing the everyday ramifications for victims. Fearing detention of deportation, “women and children who are experiencing violence are afraid to come forward, they’re afraid to seek the immigration law protections to which they’re entitled.” Some victims might fear going to work, school, or even the hospital. Often advocacy organizations like domestic-violence hotlines and aid organizations are torn, wary of unnecessarily exposing clients to Homeland Security. The risks of reporting abuse might depend on the willingness of state or local police to prioritize victim protection over federal immigration enforcement. In areas hostile to immigrants, service providers might be apprehensive about even encouraging women to call 911 in emergencies.3

“We want to be sure that clients are able to find safety, security, can get health services when there’s an emergency,” Pyati says, but since ICE’s crackdown has so far been inconsistently and chaotically implemented, “everybody’s rights are dependent on their jurisdiction at this moment, which creates chaos, and creates a feeling of uncertainty, unsettlement and insecurity.”4

Take the case of Irvin Gonzales, a transgender abuse survivor in El Paso, Texas. She was picked up by federal agents while seeking a protective order at the local courthouse, unaware that her immigration status would trigger deportation proceedings. On her day in court as a victim, ICE arrested her as an “illegal.”5

Nationwide, advocates fear a chilling effect that deters women, girls, and other victims of gender-based violence or trafficking from seeking help. Pyati recently testified before a congressional hearing that service providers were seeing a “steep drop in the number of women asking for accompaniment to report crime and seek protection orders.” Even before Trump entered office, a survey of Latino communities cited “fear of more violence for themselves and their families” or “fear of children being taken away” as major barriers for domestic violence victims.6

When children are involved, undocumented parents might refrain from reporting or leaving an abusive partner to avoid intervention from the child-welfare system (creating yet another legal barrier for the non-abusive parent) or enabling the abuser to take control of the children. 7

Maybe a shelter won’t even be safe. The Trump administration has signaled that it may start targeting institutions traditionally seen as off limits for ICE, such as churches and homeless shelters, to carry out raids. Under the Obama administration, there was at least clearer policy guidance on protections afforded to victims of crime (including temporary protection from deportation for witnesses or victims) or how enforcement actions should be limited for vulnerable groups posing no safety threat, Pyati notes, but it’s unclear whether Trump has scrapped those guidelines, after broadly rescinding the deportation policies instituted under Obama.8

A survivor in Tahirh’s network, Felicité Blessed, recalled in a testimony, back in 2004, how she struggled to leave her abusive husband, even when he was beating her during her pregnancy:9

[I]f I had been facing that same situation today…to be honest, I don’t think I would have called the police, because I did not have legal status, because he never filed for me. Now I would think they would just come and deport me because that is what my husband was telling me and that is what we are hearing everywhere…. And if I had been deported I would have been separated from my daughter because she was born a US citizen. That would have broken my heart, and who would she have stayed with?10

Trump’s crackdown undermines protections under the Violence Against Women Act, which opened legal avenues to petition independently for immigration relief for victims to help them escape coercion and abuse. Since 2000, the government has offered T visas (for victims of trafficking) and U visas (for victims of other crimes, including sexual assault) giving protective status to immigrants cooperating with official investigations. Advocates have previously criticized those measures for being too limited. However, Trump’s decrees seem to be rapidly unraveling even these protections.11

In Pyati’s view, “An executive order now is stripping these very important pieces of legislation of their power,” though they “passed with robust bipartisan support in order to protect immigrants and fulfill the widely accepted public safety goal of encouraging cooperation with law enforcement.” Another factor worsening the public-safety situation is the massive backlog in immigration courts and visa processing, which means many who have legitimate relief claims still can’t get a fair hearing.12

“Instead of the administration seeking funding for all this enforcement,” Pyati argues, “we would love to see some funding going to the immigration courts and to [agency] adjudicators to be able clear some of these very very long backlogs and ensure due process.”13

It only adds to the tragic irony of the crisis that many of the survivors have come to this country to escape abusive situations at home, particularly in the case of the recent influx of asylum seekers from Central America, from areas where domestic and government-sanctioned gender-based violence is rife.14

“If women and children are going to come here because they’re afraid of violence and then finally find safety here, but that safety is torn apart because of ICE policies,” Pyati says, “we are undercutting not only…forms of protection that people might be eligible for, but also our international obligations to protect refugees who are fleeing persecution.” With state and personal violence intersecting in migrants’ lives, “There’s need to…protect women when they’re unsafe abroad or facing violence here.” By criminalizing survivors, she adds, “what we’re doing is creating a sort of underclass of residents in America…. We are saying that we don’t need to offer you the protection of our police force and the protection of our hospitals and the education in our schools. We’re saying that you don’t deserve those things.”15

As Trump intensifies these overlapping crises, advocates now must struggle harder than ever to maintain solidarity and mutual trust in frontline immigrant-defense networks; community sanctuaries only stand as strong as the people inside are undivided.16